The world's first real foldable phone is rough around the edges

And yet, I can't stop opening and closing it.

Unless you're (for some reason) a fan of personal cinema headsets, you almost certainly haven't heard of Royole. That's OK -- founder and CEO Bill Liu wanted it that way. Unbeknownst to most of the world, Royole has quietly been working to pioneer and perfect its own flexible screens since 2012, and its new FlexPai smartphone represents something of a coming-out party.

Before we go any further, though, we need to get a few things straight. Yes, this is a real product that you can buy right now. Yes, this basically unknown company beat Samsung to market with a foldable smartphone. And yes, it actually works.

For those who haven't been keeping track, the FlexPai packs a Snapdragon 855 chipset (since it's already on sale, this probably counts as the world's first commercially available 855 phone), either 6 or 8GB of RAM, 128GB or 256GB of storage and 16MP+20MP dual camera. Oh, and it even runs Android 9.0 Pie (albeit a version loaded with plenty of tweaks to make tablet mode work).On paper, that's enough to put the FlexPai squarely in flagship territory, but who are we kidding? All that really matters there is the 7.8-inch AMOLED display that folds in half to form a usable -- if kind of unwieldy -- smartphone. All told, it doesn't get much more bleeding edge than this.

This isn't the first time the FlexPai has broken cover -- it went on a world tour of sorts in late 2018. The difference is, the device wasn't quite ready for production back then, and it definitely showed. At CES, though, the company is showing off production models that actually work pretty well. There's a very specific kind of joy that manifests when you unfold a phone into a tiny tablet, and during our hands-on time with the thing, I found myself opening and closing often just because I could. (In fairness, I did the same with the decidedly non-flexible Axon M.)

The FlexPai's novelty is almost intoxicating, and in an era where samey-same devices are impossible to avoid, there's something to be said for pushing envelopes. It's a tablet! It's a phone! At the same time! What's not to like? 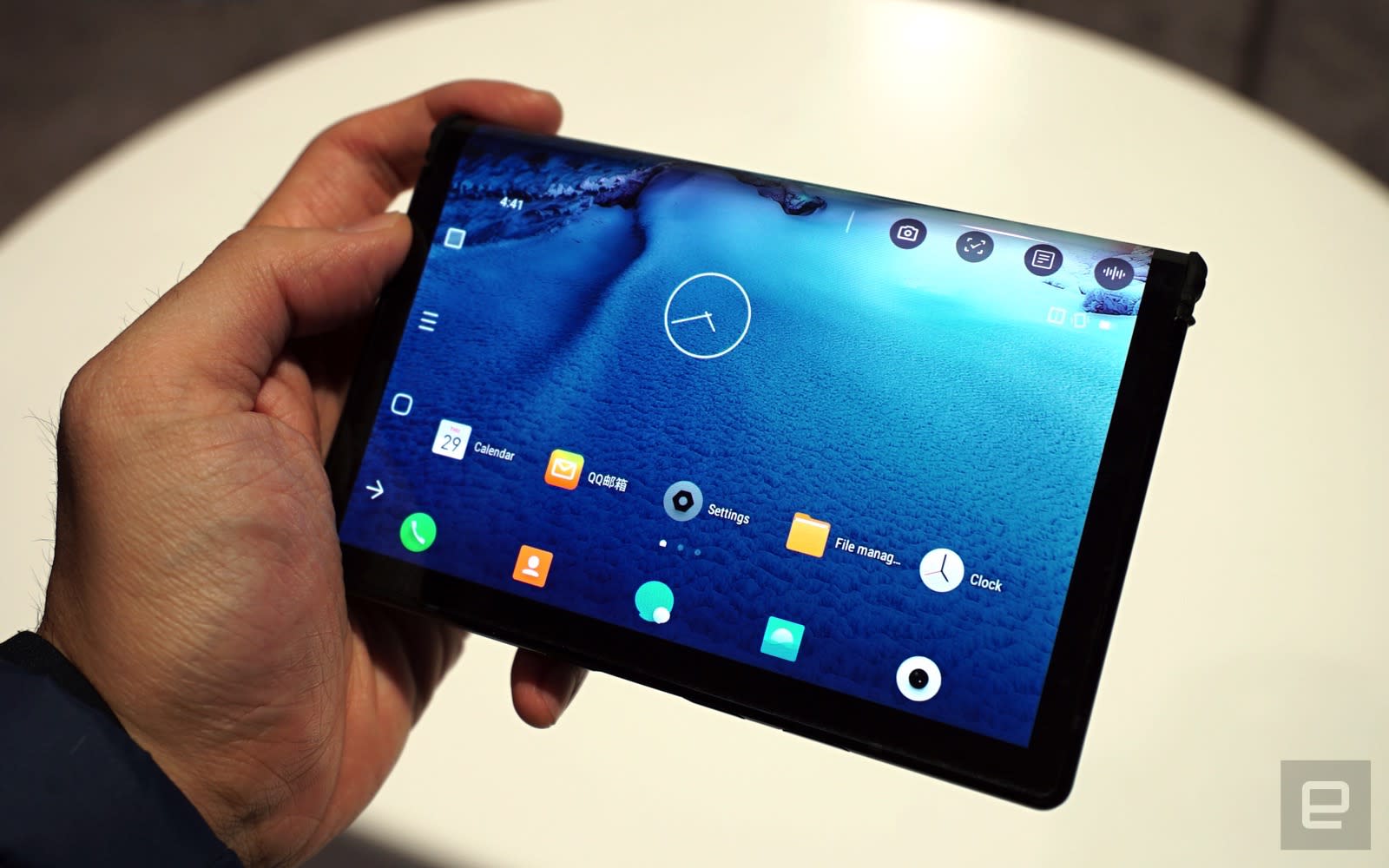 As it happens, quite a bit. That Royole sort of came out of seemingly nowhere with a fully functional foldable is seriously impressive, but at this point, it's clear that building a truly good interface for a device like this is hard. When unfolded, the FlexPai works exactly the way you would expect a tablet to. That's a good thing.

When it's doubled over in phone mode, though, the situation gets a little more confusing. All of your app icons and widgets appear right where they're supposed to, but let's say you had an app open on that half-screen and turn the phone around to see the other side. What's supposed to happen then? I expected to see the exact same app and information, but instead got a mostly empty homescreen. Crafting a properly good smartphone interface is hard enough, but crafting one for a kind of device that has never existed before? Let's just say software growing pains were inevitable.

And as powerful as the hardware seemed to be, I was confused by a few of the decisions Royole made. There's no mechanism to lock the screen when it's unfolded, so if you hold it in one hand, you'll definitely notice the slight bend along its hinge. And at least on the models I tested, the cameras were absolutely godawful -- they technically worked, but that's about the nicest thing I could say about them. (The company's CEO later told us that while the hardware was done, the software on the models we tested wasn't quite final.) 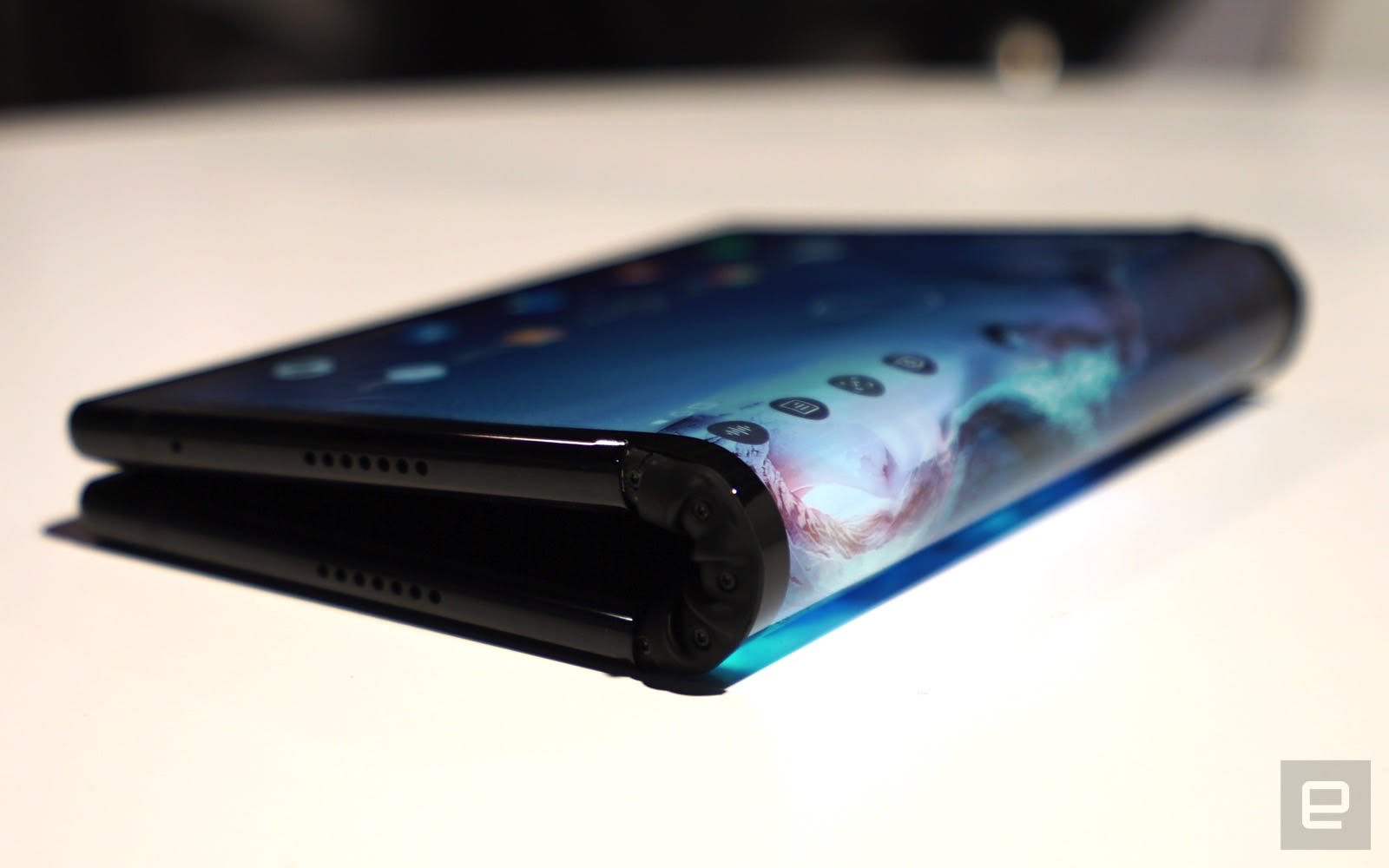 So yes, even though you can buy one right now, the FlexPai is still a long way from perfect. Even so, I can't remember the last time I found a weird smartphone so charming -- it must have been back during those glorious old days when Android phones were unabashedly weird. And for what it's worth, Royole isn't just going to be a one-and-done smartphone maker; CEO Liu told us that once the company made the decision to enter the mobile fray, there was no turning back

At this point, it seems pretty clear that the future of smartphone is packing ever bigger displays into ever smaller bodies, and Liu believes Royole's low-key work has set the company up for success. He might be onto something. Google is working to build foldable device support into Android, a move that could fix some of the company's biggest software and compatibility issues. And if nothing else, Liu hasn't ruled out the idea of just supplying foldable screens to other smartphone makers. Even if the FlexPai gets overshadowed by flashier rivals, there are ways forward for the company -- in any case, expect to hear the name Royole a lot more soon.