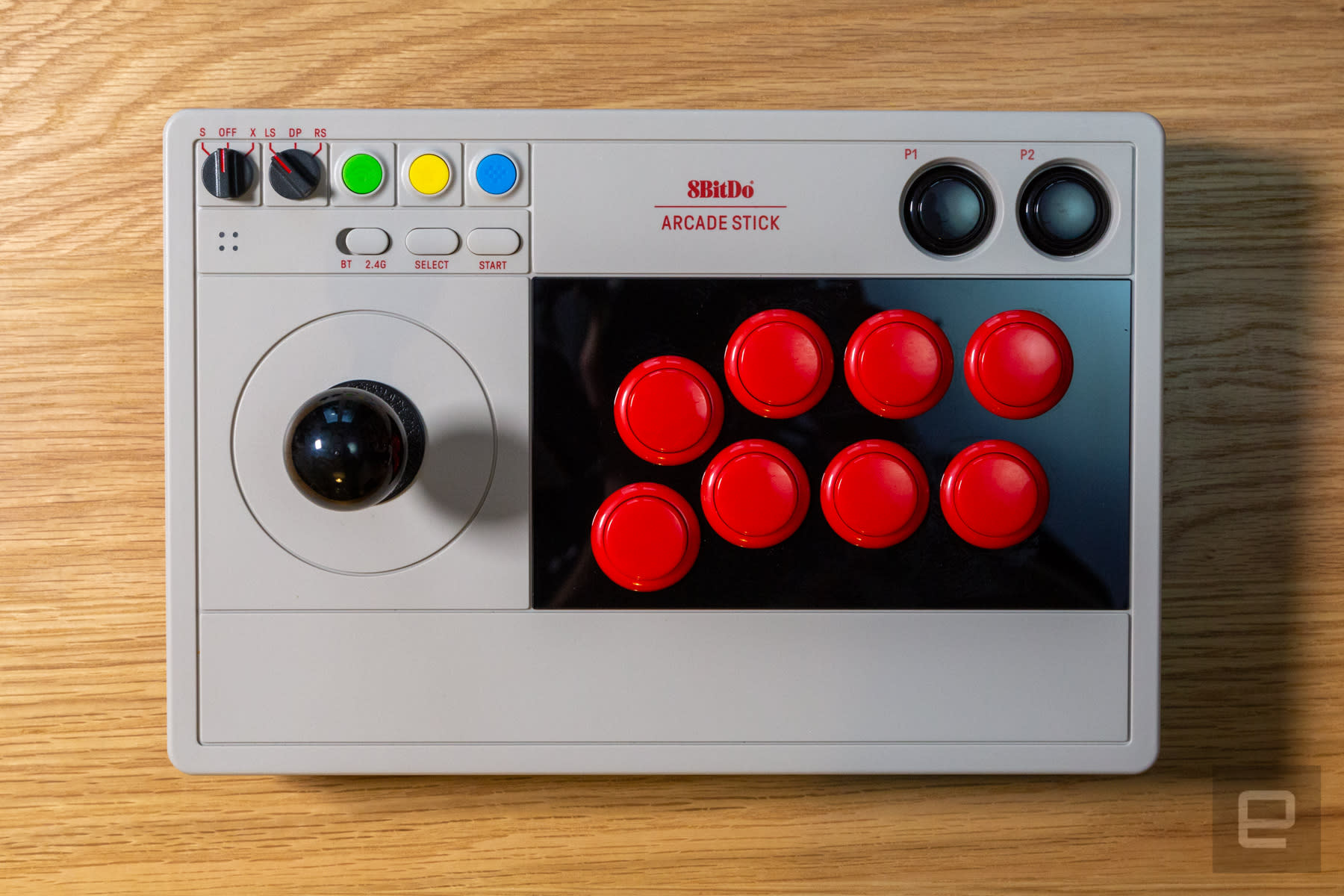 It’s been awhile since I used a fight stick. As a teenager, I would venture into my nearest arcade and spend what little money I had on Dance Dance Revolution. Once my legs had turned to mush, I would hobble over to the Tekken cabinets and get annihilated by a fighting game fanatic who never seemed to leave. I enjoyed our infrequent bouts but had no interest in replicating the experience at home. Arcade sticks were fun, but not something I wanted to seriously invest in. Many years later, that position has finally changed thanks to the 8BitDo Arcade Stick, a moddable option designed for PC, Nintendo Switch and Raspberry Pi.

The attraction starts with the design. Just look at it. There are plenty of console and PC-compatible sticks that look like they were ripped straight out of a modern arcade cabinet. I like the aesthetic — it brings back many fond memories — but have always wanted something different for my living room. Something that blends in with the absurd number of controllers that dominate my sofa and media center. With its new Arcade Stick, 8BitDo has cleverly drawn inspiration from the iconic Nintendo Entertainment System (NES). The peripheral is boxy and grey, after all, with a black panel on top and red circular buttons, just like the console’s official controller.

The design is a clear evolution of the N30 Arcade Stick, another retro-inspired accessory developed by 8BitDo. It’s also similar to the NES Advantage, an arcade-style controller released for the Nintendo Entertainment System in 1987. Both peripherals slope upwards and have a circular indentation around the black joystick, for instance. If you ever owned Nintendo’s eight-bit system, or have any fondness for that era of video game hardware, these visual nods will fill you with child-like glee.

The 8BitDo Arcade Stick is another brilliant blend of Nintendo heritage and modern video game sensibilities. The peripheral has eight primary buttons, for instance, rather than the two that shipped with the NES Advantage. They’re arranged in a Vewlix layout, which has the first column slightly lower than the other three. The set covers every face button, bumper and trigger normally found on an Xbox or Switch Pro controller. The Arcade Stick also has two extra buttons, P1 and P2, which are primarily used for custom macros.

I like the joystick and buttons that 8BitDo has opted for. They’re not the best that money can buy — fighting game enthusiasts will undoubtedly prefer parts by Happ, Sanwa or Hori. For the average person, though, they’re perfectly respectable. The joystick is large enough to hold with a classic ‘broomstick’ or cradled ‘wine glass’ grip. It feels durable and makes a nice clicking sound when you roll it around the gate hidden beneath the top panel. The buttons, meanwhile, are enormous fun to mash. Sure, they have a gloss finish that won’t be to everyone’s tastes. My fingers never slipped off, though, and every button press was registered correctly, regardless of the game and platform.

The Arcade Stick is heavy, too. That would be a criticism in almost any other product category. A fight stick needs to be hefty, though, so it doesn’t slide around on your lap, desk or table. 8BitDo’s latest accessory weighs 2.1KG, which is only 100 grams lighter than Hori’s Real Arcade Pro V Hayabusa stick, which also supports PC and Switch. It’s narrower than most alternatives including the Mayflash F500, but wide enough that you can balance it comfortably on two legs. The base is also equipped with four rubber feet that give it some extra grip. That means you can be confident that the Stick won’t move while you’re in the middle of a tense Smash Bros. match.

In the top-left hand corner, you’ll find a well-organized panel with two physical switches. The first shifts the controller between its Nintendo Switch and XInput (PC) profiles. When you do this, the red button labels — which are actually LEDs built into the machine — will flip to the correct set. It’s an incredibly stylish feature that’s also helpful for casual players such as my girlfriend, who rarely plays video games and needs to look down to make sure that she’s pressing the correct buttons. The second physical switch tells your console or PC that the joystick is serving as a D-pad, left or right analog stick. That means, if you have patience and seriously nimble fingers, you can play any 3D game that relies on a right stick for camera control.

Next to the switches are three colorful buttons for pairing, going ‘home’ and switching any other button into turbo mode. Below them are dedicated Start and Select buttons, as well as a wireless connectivity toggle. That’s right — 8BitDo’s Arcade Stick can be used wirelessly. Serious players will want to use the detachable 3-meter cable that’s included in the box, given it offers the lowest-latency connection. If you want a cleaner setup, though, the Arcade Stick also supports Bluetooth and a 2.4G wireless receiver that slots into your PC tower, laptop or Nintendo Switch dock. Better yet, there’s a compartment on the back of the Stick for storing the dongle when you’re traveling or using another form of connectivity.

I love having these options. For comparison, Hori’s Real Arcade Pro V Hayabusa stick has zero wireless options and a non-detachable USB cable that lives in a huge compartment at the front of the stick. For many fighting game fans, that’s not a problem — they only want a wired connection anyway. But there are plenty of arcade games that don’t require such precision. You could use the Arcade Stick to play Overcooked, for example, or even a top-down strategy title like Wargroove. In these instances, it’s nice to relax and not worry about whether someone is going to trip over the cable running between your sofa and Switch dock.

Connectivity varies, however, if you start experimenting with platforms that aren’t officially supported. The Stick worked wonderfully with my Android phone, for instance. With a USB-C to USB-A adapter, I was able to plug in the Stick’s dongle and, for a fully wired connection, the included USB cable. The peripheral also appeared in my phone’s Bluetooth settings after I held the pairing button down. So far, so good. If you prefer Apple hardware, though, it’s a different story. The Stick would only connect to my iMac and iPad Pro over Bluetooth — wired and 2.4G wireless were a no-go. I also had no luck using the Arcade Stick with my base PS4.

Still, it’s a versatile little machine. That flexibility is stretched even farther once you start diving into the customization options. With the 8BitDo Ultimate Software, you can remap any of the 10 circular buttons that sit alongside the joystick. The Turbo button can also be configured to act as the Switch’s capture button or a shortcut that quickly swaps two buttons around. The remapping is also mode-specific. If you change B to R3 in the Switch profile, for instance, it won’t affect how that button behaves on PC.

If you want to cheat a little, there’s also a tab that lets you assign macros to the P1 and P2 buttons. Within seconds, I had two shortcuts that let me hurl Hadoukens and Shoryukens in Super Street Fighter II Turbo. (Please don’t judge me.) It’s not a feature that serious fighting game enthusiasts will want to use. But if you know someone that’s struggling with a specific combo, this is a great way to give them a helping hand.

You can save all of your macros and button remapping as a custom profile, too. I like this idea but you can only change profiles through the Ultimate Software app. If you’re playing on a PC, this isn’t a huge problem — simply alt-tab over and make the tweak. It’s not ideal, though, if you’re away from a computer and want to bounce between profiles designed for specific Nintendo Switch games. I would have loved a third switch in the top-left hand corner that lets you cycle through a few different profiles.

On top of all this, you can make hardware adjustments. To get started, you’ll need to flip the Arcade Stick over and remove six Torx screws. (The type with a star-shaped head.) It doesn’t come with the necessary screwdriver, so you’ll need to supply your own. The holes are also extremely deep and narrow, so a small multitool won’t cut it. Once you’ve separated the top and bottom panels, you can start removing parts. The buttons are easy enough to pull out — you simply yank the wires off and push two nubs on either side.

I swapped the buttons with a set that comes preinstalled on Hori’s Real Arcade Pro V Hayabusa stick. The connectors were in a slightly different position, which required some small adjustments to the cabling inside the 8BitDo Arcade Stick. I didn’t time myself but suspect the process took less than half an hour. According to the manufacturer, the stick should support all 30mm and 24mm buttons made by Sanwa and Seimitsu, too.

Unfortunately, replacing the joystick isn’t so simple. As YouTuber Mr. Sujano explains, the relevant wires are soldered to the stick’s microswitches. That means you’ll need to cut or desolder these cables before attaching a new joystick. If you’re willing to do this, you can swap in something by Sanwa, Seimitsu, Happ or IL. Seasoned fight stick owners will be used to this process, but it doesn’t feel very newcomer friendly. 8BitDo doesn’t provide any sort of guidance, either. If you’re not sure what to do, you’ll need to find someone who does or follow one of the many fan-made tutorials online.

For $90, the Arcade Stick is still a great deal. It has a distinctive design that should appeal to Nintendo fans young and old. The peripheral is sturdy and the most important parts — the joystick and primary buttons — are good enough for most people. It’s also possible to upgrade these components down the line, provided you have the money, tools and patience. The Arcade Stick supports a variety of platforms, which is great, but there are alternatives that cover an even broader range of hardware. If that’s your priority, you’re probably better off with the Mayflash F500.

Mayflash sticks are wired, though, just like Hori’s Real Arcade Pro V Hayabusa. With the 8BitDo Arcade Stick, you also get the versatility of Bluetooth and 2.4GHz wireless. For fighting game enthusiasts, these options will be redundant. But it’s a great option for casual players. I’m also impressed with the 8BitDo Ultimate Software — just like I was while testing the company’s excellent SN30 Pro+ controller — and the customization it offers. If you’re buying a stick for the first time and play primarily on a Switch, PC or Raspberry Pi, the Arcade Stick is a solid option. And if you’re a seasoned fight stick owner, it’s still worth picking up for the stylish case alone.