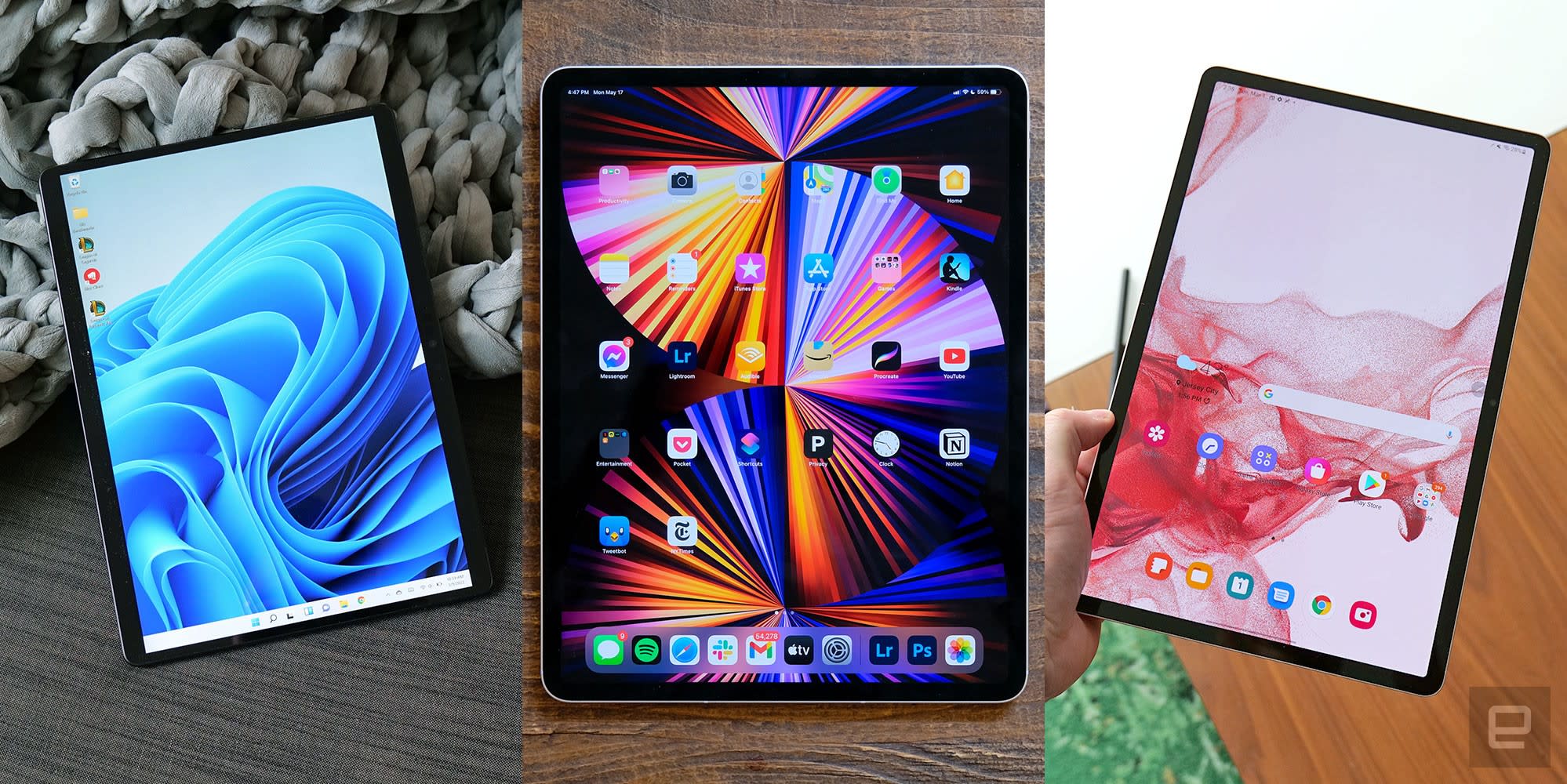 We’ve got picks for every ecosystem along with some more affordable options too.

S. Rutherford
@samrutherford
October 13, 2022 9:15 AM
In this article: amazon, thebuyersguide, apple, gear, evergreen, samsung, best tech, feature, shopping, microsoft, commerce, streamshopping, holiday gifts, tablets
All products recommended by Engadget are selected by our editorial team, independent of our parent company. Some of our stories include affiliate links. If you buy something through one of these links, we may earn an affiliate commission. All prices are correct at the time of publishing.

Following the release of the 2022 iPad Air and Samsung’s Galaxy Tab S8 line earlier this spring, there hasn’t been a ton of movement in the tablet world. At IFA, Lenovo announced refreshed versions of the Tab P11 and P11 Pro featuring updated internals and even an 11.2-inch OLED display with a 120Hz refresh rate on the Pro. More recently, Amazon launched revamped versions of its Fire HD 8 tablets featuring new “Tap to Alexa” functionality. And while Amazon’s e-readers aren’t typically thought of as tablets, the new Kindle Scribe deserves some consideration thanks to the addition of an included pen and support for handwritten notes.

However, people looking for a fancy new slate may want to hold off for now, as rumors suggest that Apple is planning to release an updated version of the basic iPad sometime later this fall packing a USB-C port (instead of Lighting), along with improved performance, optional 5G connectivity and a slightly larger display. Then, looking further ahead, Google has also announced that it's planning to release the upcoming Pixel Tablet sometime in 2023.

Which OS is right for me?

Before you even start looking at specific devices, consider how your new tablet will fit in with the gadgets you already own, and how you plan to use it. For example, if everyone in your house uses Macs and iPhones, it probably doesn’t make a lot of sense to buy an Android tablet, even if you’ve been tempted by the massive 14.6-inch screen on the new Galaxy Tab S8 Ultra. This goes double for anyone with an extensive library of purchased videos and music that might be harder to access after switching platforms.

Another consideration is the kind of work you’ll be doing. That’s because while all modern tablets are adept at browsing websites or playing games, some operating systems like iPadOS and Windows 11 are better designed to support multitasking and productivity than Android or even Chrome OS. It’s a similar situation for software, because while most popular apps and games are available on both Apple’s App Store and Google’s Play Store, more specialized enterprise software may only have proper support on desktop platforms like Windows or macOS.

What size screen should I get?

Trying to decide the size of your tablet is also related to the kind of work (or play) you intend to do. Larger displays make it much easier to view two apps side by side, with big screens also delivering a more immersive movie viewing experience. But at the same time, the larger the tablet, the less likely you’re going to want to move it around. That means you’re not only going to want to take stock of your workspace (i.e., if you have a desk or instead plan to work from a couch or even your bed), you’re also going to want to think about how the device will fit into your everyday routine or commute (if you have one).

Finally, you’ll want to consider any add-ons or accessories you’re planning to use, which can range from detachable keyboards to things like external mics or a stylus. The good news is that many tablets nowadays offer some kind of keyboard accessory, which allows the device to function more like a 2-in-1 instead of simply being a content consumption device. Some tablets also feature things like microSD card slots that support expandable storage, or optional 4G or 5G connectivity, which can be a real boon to frequent travelers. And if you’re planning to use the tablet mainly for work, you might want to grab a USB hub for connecting all your favorite peripherals.

Powered by the same M1 chips you get in Apple’s MacBooks, the iPad Pro is one of the fastest and most well-built tablets you can buy today. It’s available in two sizes (11 and 12.9 inches) and works with a range of accessories including the Apple Pencil and the extremely useful (but pricey) Magic Keyboard. And thanks to their 120Hz ProMotion mini-LED displays, the iPad Pro’s screen boasts strong brightness and fluid visuals, regardless of whether you’re watching a movie or creating a slideshow presentation. Recent versions of iPadOS have also made Apple’s most premium tablet a much more capable work device, with the addition of new sidebars for quickly switching between apps, a more powerful desktop-like UI for Safari, and various new toolbars throughout.

The main downside is that starting at $800 for a base 11-inch model with 128GB of storage, Apple’s iPad Pros aren’t cheap, and that’s before you tack on any extras like cellular connectivity or a keyboard. But considering there’s a good chance a new iPad Pro is more powerful than your current laptop, there isn’t really anything you can throw at Apple’s top-of-the-line tablet it can’t handle.

One final note is that if you like the iPad Pro but want something a bit more affordable, there’s also the fifth-gen iPad Air. You still get the same M1 chip, Apple Pencil support, and optional 5G connectivity. And with a 10.9-inch screen, it’s basically the same size as the smaller iPad Pro too. The main difference is that the iPad Air’s display isn’t quite as bright and doesn’t support a 120Hz refresh rate. But if you’re ok with that, the fifth-gen iPad Air is essentially an iPad Pro with a less fancy screen that starts at $599 instead of $799.

Available in three sizes – an 11-, 12.4- and a huge 14.6-inch model – Samsung’s new Galaxy Tab S8 line has the right-sized screen for practically any need. And while Android typically isn’t quite as accommodating to productivity as Windows or iPadOS, Samsung’s Dex mode offers a desktop-like UI complete with multi-window support and a taskbar for potent multitasking.

Samsung’s mobile displays are also some of the best in the business, with support for 120Hz refresh rates and vibrant colors from their OLED panels. And unlike Samsung’s flagship phone line, the Galaxy Tab S8 still comes with microSD card support, though sadly, Samsung couldn’t seem to find room for a dedicated headphone jack. You even get a choice of three different covers: a simple folio, a keyboard cover and a keyboard cover with a built-in touchpad, so you can choose the right accessory for your needs.

New on the Surface Pro 8 is a beautiful display with a smooth 120Hz refresh rate and improved stereo speakers, while the inclusion of an IR facial recognition camera allows you to log in to the system in a snap. Another nice bonus is that unlike a lot of tablets, the Surface Pro 8’s SSD is user accessible, allowing you to upgrade its storage yourself whenever you want. And thanks to improvements in Windows 11, the Surface Pro 8 is better suited to life as a tablet without ever needing to attach a keyboard thanks to larger app icons and more touch-friendly controls.

If you just want a simple tablet for a reasonable price, it’s hard to go wrong with the standard Apple iPad. Starting at $329, the basic iPad has a 10.2-inch display with good brightness (500 nits) and a relatively speedy A13 Bionic chip. It’s also the last iPad that still features an old-school Touch ID home button.

After being refreshed last year, the ninth-gen iPad got updated features including Apple Pencil support, improved cameras (in front and back) and double the base storage (64GB, up from 32GB). And just like its more expensive siblings, the standard iPad is available in a WiFi-only model or with optional 4G LTE cellular connectivity. The basic iPad is also the cheapest device Apple sells that gives you access to the App Store, which makes it a good multimedia device and a handy way of managing your media library across your other Apple devices.

If you’re in the market for a new tablet for your child, the Fire HD 10 Kids Pro is the easy pick. Starting at $200, it's the cheapest tablet on this list, and unlike more adult-oriented fare, it comes with an included “kid-proof” case and a two-year warranty. Amazon says if your kid breaks the tablet, the company will replace it for free.

Other useful add-ins include a free one-year subscription to Amazon Kids+, which unlocks more than 20,000 games, books and apps designed for children. There’s also a handy dashboard for parents that allows you to set time limits, content filters and educational goals. And even though its 3GB of RAM and 32GB of base storage aren’t much, its 1080p display is plenty sharp and it has a microSD card slot for expandable storage. And if you want a slightly smaller and more affordable option, there’s the $140 Fire HD 8 Kids Pro too.