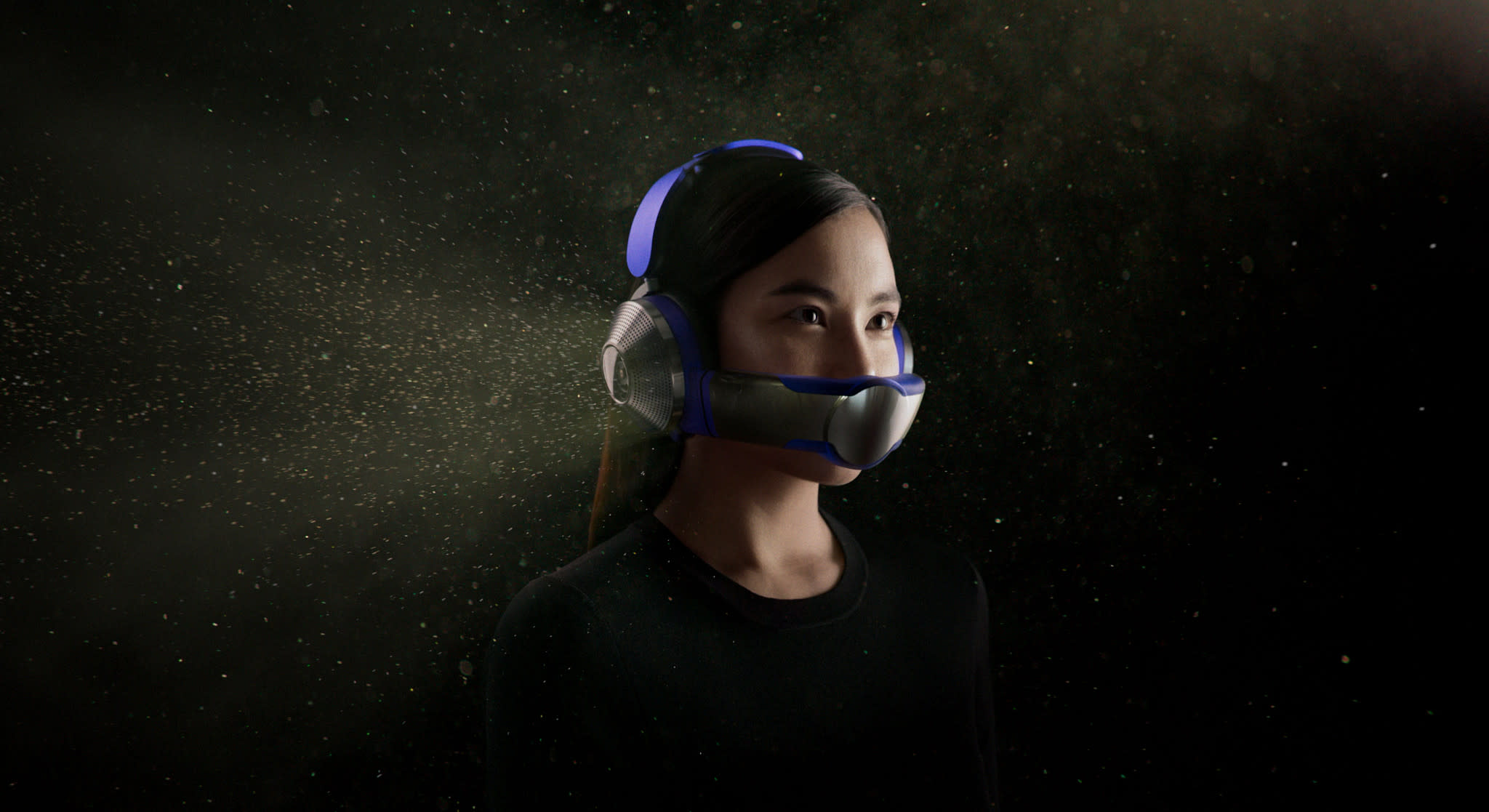 Believe it or not, the Dyson Zone was designed pre-pandemic.

Dyson just unveiled its first wearable product and… it’s not what you think it is. The device is called the Dyson Zone, and it's a set of noise-canceling, air-purifying headphones. It comes with a detachable visor for the bottom half of the wearer’s face that looks, to put it mildly, odd. That vizor actually blows filtered air to your nose, mouth and chin, sort of like a portable fan dedicated to the lower portion of your face. Dyson integrated a smaller version of its air filtration system into the earcups, and the idea is that people can protect themselves from pollution while out and about.

The Zone might seem like a response to the pandemic, but Dyson says this device has actually been six years in the making. It’s not borne from a desire to keep out COVID-19 germs, per se, and more as a means to help people breathe less-polluted air wherever they go. The Zone is not only a wearable air filtration system, but it’s also the company’s first audio product. In fact, Dyson describes it as “headphones delivering pure air and pure sound.”

If you’re thinking this thing looks absurd, you’re not alone. My first reaction to seeing the Zone on a mannequin’s head during a virtual briefing was complete and utter amusement. Shortly after, I saw it on an actual person on the demo call and it did not look like they were enjoying themselves. So when Dyson offered to show the contraption to me in person, I knew I had to see and try this thing out for myself. Sadly, I wasn’t allowed to take any photos or video of the Zone, so I’ll do my best to describe the experience.

My biggest takeaway after spending some time with a prototype is that, yes, it does look just as ridiculous in real life. But somehow, in spite of its wild appearance, I still really want one. Dyson said it engineered the headset to fit comfortably and distribute weight evenly, by drawing inspiration from horse saddles. There are three cushions on the headband, and the central one is slightly curved like a saddle to distribute the load through “contact areas.”

When I put on the Zone and adjusted its arms to fit my head, it felt balanced and didn’t feel heavy. The earcups themselves were spongy and soft, and once they clamped on there was a noticeable noise canceling effect. That’s because the demo unit had already been set to enable active noise canceling when it’s worn. By clicking through a physical switch on the earcup, I toggled through different sound profiles, and though I occasionally heard some static, the pass-through and complete cancellation modes were effective.

Three ANC modes are available: Isolation, Conversation and Transparency. Isolation provides the highest level of muffling, while Conversation, which kicks in when you dip the visor, turns off the filtration motors to let you better hear who you’re talking to. Transparency allows certain sounds to pass through, so you can be aware of your surroundings.

For an initial foray into the audio space, the Zone is impressively satisfying. A company rep streamed Spotify to the demo unit and I enjoyed the ample bass and clear sound in songs like Doja Cat’s Say So.

The highlight of my time with the Zone, though, has got to be when I snapped the magnetic visor on. After I figured out where on the headphones to aim the edges, taking the attachment on and off was easy. Once the mask was connected, the motors in the earcups whirred to life and a gentle, clean-smelling trickle of air started blowing at my lips and nose. It was surprisingly comfortable and, for an obsessive clean freak like me, felt borderline magical. This could not only be the personal air bubble I’ve dreamed of, but also might be a portable air conditioner for the lower half of my face, which would be a blessing in the summer.

Four air purification modes are available as well — low, medium, high and auto. You can toggle these to, say, use the maximum level when you need a higher purification speed if you’re breathing rapidly during a quick jog on the streets. For the Auto mode, the Zone will use onboard accelerometers to determine which setting to choose.

The visor was also designed to diffuse two jets of airflow and at no point during my time with the Dyson Zone did I feel like I was being overwhelmed or pummeled by wind. The earcup’s compressors draw air through dual-layer filters, including negatively charged electrostatic filters to catch particles like allergens and dust. A potassium-enriched carbon layer captures gas pollutants like nitrogen dioxide, sulfur dioxide and ozone.

Earlier versions of the Zone took the form of a snorkel-like mouthpiece connected to a backpack (like oxygen tanks in a scuba diving setup). 500 prototypes later, the company settled on the headset and visor combination, and the mouthpiece can deliver clean air without touching the wearer’s face. “Developing a non-contact solution was a must for Dyson engineers, to avoid the discomfort and irritation often associated with full-contact alternatives,” the company said in a statement.

It does leave room for you to insert a face mask, though, and Dyson provides attachments for coverings that would meet FFP2 filtration standards in the box. It also includes a “community face covering attachment” that would form a “sealed solution” so you can mask up while keeping your filtered air clean.

Dyson also made a companion app that shows the air quality of the region you’re in, though at the time of the demo it didn’t offer information that was more location-specific than a city. You couldn’t, for instance, see if your place of work had more air pollutants than the park you’d walk to for lunch.

The company hasn’t shared pricing and availability information for the Zone just yet, other than to say it’s coming this year. I can already see this being a great device for my future travels — whether in an airplane or a commuter train, and at the demo I even went to lay down on a couch to see how comfortable the Zone would be to wear on a redeye flight. It felt surprisingly comfortable for the admittedly brief period of time I was lying down. But of course, there are still things I’d need to know before spending money on the Zone — like battery life and real-world performance. Hopefully, Dyson will share more information on those things soon.