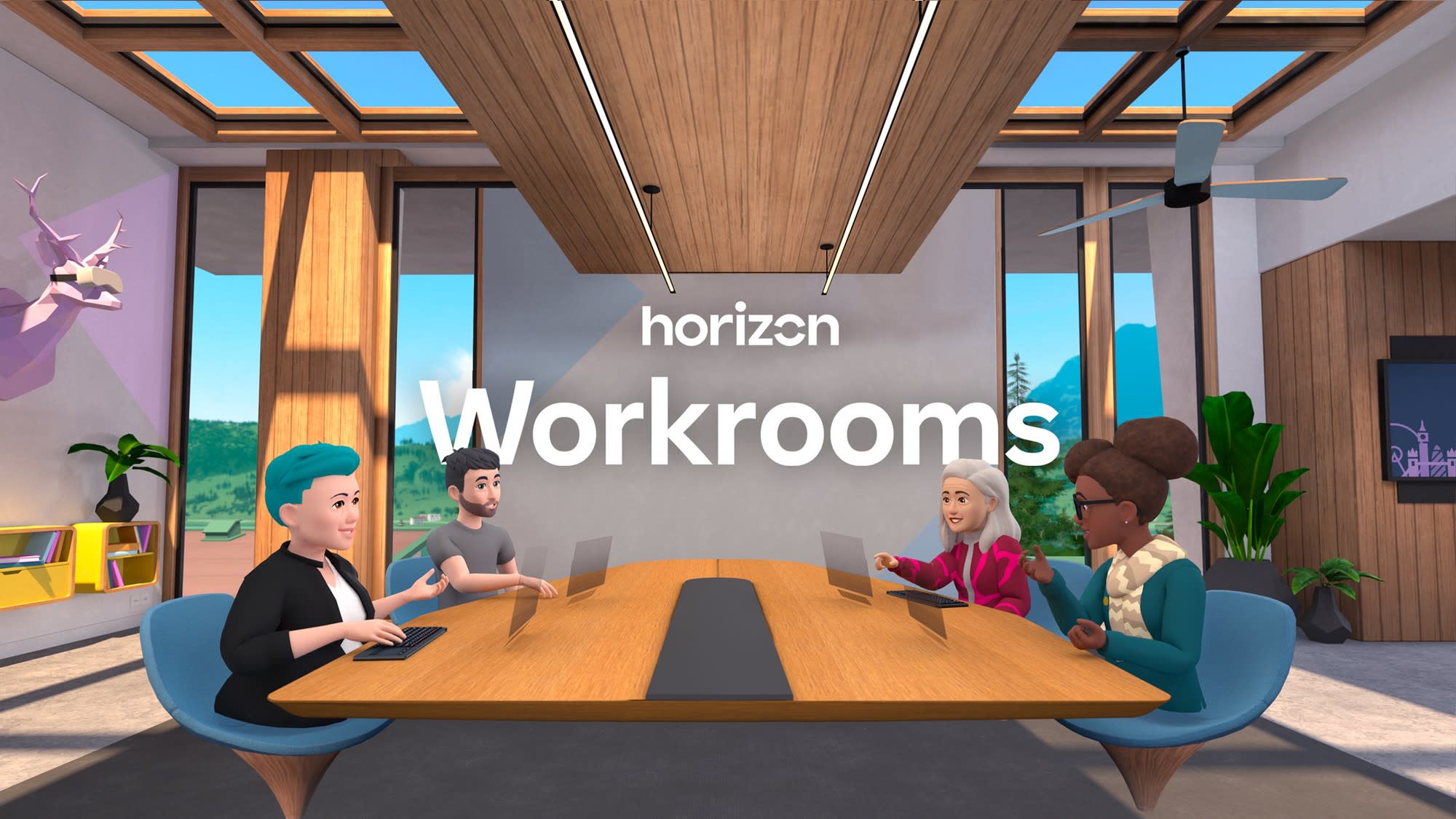 It's built for everyone who's tired of group video chats.

Am I a weirdo for liking in-person meetings? Sure, they can go on too long, be scheduled far too often and distract from your core work. But even before the pandemic made them an exotic memory, I always loved the energy of being in a room with other people, finding the same creative wavelength, working towards a common goal. There's no video chat app that can replicate that. So, what about VR?

We've already seen companies like Spatial take a stab at virtual meetings, where you can chat with others, inspect objects and even explore 3D environments from the comfort your home with a VR headset. Now Facebook's Oculus is entering the fray with Horizon Workrooms, an ambitious attempt to capture the best aspects of in-person meetings for Oculus Quest 2 users.

To be clear, Workrooms isn't Facebook Horizon, its long-awaited multiplayer VR playground. But it is part of the company's overall vision for the Horizon universe, one entirely devoted to collaborating in meeting rooms and classrooms. And despite being so focused, it's still a showpiece for Facebook's VR ambitions, tapping into the company's expressive avatars, spatial sound, hand tracking and mixed-reality capabilities. You'll even be able to stream your PC desktop in VR to take notes or goof off during meetings (just like real life!).

After spending an hour in a Horizon Workrooms demo, it's clear that Facebook still has plenty of work left to do. There were a few connection issues, avatar glitches and at one point I got booted out entirely. But when it was running smoothly, it was the closest I've felt to being in an live meeting since March of last year.

But let me start from the beginning. After creating a Workrooms account, I installed the PC companion app and the Workrooms Quest 2 app. Once I booted it up in VR, I was surprised that it recommended putting my controllers down and enabling the Quest 2's hand-tracking. Outside of demos for that feature, I can't think of any Oculus apps that have done the same. After that, I customized a goofy avatar — an idealized version of myself with purple hair and no beer belly — and mapped out the edge of my desk so Workrooms can accurately place me in front of virtual tables.

As soon as I hopped into my Horizon Workrooms demo, it was instantly clear why Oculus recommended hand-tracking. I waved to a PR rep, and as I struggled to unmute myself, I was able to throw a thumbs up to confirm I was hearing her. I shouted hello to CNET's Scott Stein, who was sitting a few seats away, and his audio sounded appropriately far off. We all spent way too much time staring at our hands and testing the limits of the Quest 2's finger tracking capabilities (for the record, rolling your hands over each other like a wannabe raver can easily scramble things).

Even though I was in a swanky virtual room, with a stylized deer head wearing VR goggles on the wall, and ceiling-tall windows overlooking expansive lake and mountain rage somewhere in the Pacific Northwest, sitting desk-side with others felt vaguely normal. We made small talk about our families and our vastly different locations (including folks in California, New Jersey, London and myself in Atlanta). I could see who was working on Macs and PCs, based on the virtual accessories in front of them. And along the wall there were also video feeds from other Facebook reps calling in from their PCs, which reminded me of the enormous video conferencing screens in many meeting rooms.

To see my keyboard and mouse, I hit a button to enable pass-through mode, which projected grey-scale footage of my actual desk inside of Workrooms' VR environment. It wasn't crystal clear, but it was enough to touch-type notes in Evernote by streaming my PC desktop. If you're running an Apple Magic Keyboard or a specific Logitech model, you'll also be able to see your keyboard in VR, so you won't have to deal with the pass-through video.

Andrew Bosworth, Facebook's head of VR and AR, said during the demo that he believes there's "something missing" with video calling, and that there's a strong pull towards VR collaboration apps as a solution. Of course, that's exactly what you'd expect Facebook's VR lead to say. But he has a point.

Video calls are a fantastic way for seeing people and maintaining social connections. But when it comes to getting work done, they can get old fast. Everyone's audio comes in from one channel; it's hard to make eye contact in large group chats; and the entire session just lives on your computer or phone screen. There's no sense of actually being in a space with others. Bosworth says that Facebook has been using Workrooms internally for about six months, and he's noticed some clear benefits. In particular, he can remember specific meetings better thanks to the immersion of sitting beside people in VR with realistic spatial audio.

Of course, virtual reality can also make meetings awkward in entirely new ways. I quickly learned that I couldn't look closely at someone's avatar if they were sitting nearby, because it actually felt like I was staring at them. I couldn't reach for a cup of water on my real-world desk, because it was sitting in front of my neighbor's virtual space. I also had to be careful about where I placed my hands, because the Quest 2's hand tracking could make things look... suspect, if they're under your desk.

All of that awkwardness culminated when Mark Zuckerberg crashed our demo and sat in the virtual chair beside me. He sketched out his overall vision for Horizon as a stepping stone for his metaverse ambitions. But as he was speaking, I was also trying hard to keep my virtual cool: Don't stare! Don't be weird with your hands! Pay attention and be respectful! I thought I was doing pretty well in the heat of the moment, but a recording of our session looked like I was performing some sort of interpretive dance beside the world's fifth richest man. (Thankfully, that footage isn't meant for public consumption.)

Zuckerberg only stopped by for a few minutes, but the fact he made an appearance at all is telling. Workrooms isn't some side project: It's a significant component of what he wants Facebook to become. You can see that in the app's more ambitious features, like a whiteboard that can grow as long as you'd like. You can sketch out thoughts by holding your Oculus controller straight up, so that you can use the end like a massive pen. And if you want to stretch your legs, you can assign a blank wall in your room to serve as your life-sized whiteboard. You can also change the size and layout of your workspace at will, allowing you to move from a circular conference table to something that resembles a classroom.

Perhaps because Zuckerberg wants Workrooms to be a success, the company is also making it more accessible to people who don't want Facebook accounts. You can join a session via video chat by creating a Workrooms account, which is separate from Oculus and Facebook logins. If you want to enjoy the experience in VR, though, you'll need a Facebook account to use the Quest 2. Maybe letting people peek at the 2D Workrooms experience could encourage them to go virtual.

The company is also being up-front about security and privacy, saying that it won't use conversations or materials from Workrooms sessions to inform Facebook ads. You'll also be able to report individuals and entire groups if they're harassing you or violating community standards. That was a major concern when I demoed Facebook Horizons last year; the idea of a VR playground sounds great, but how do you make it safe for everyone?

If anything, Horizon Workrooms tells us that Zuckerberg's metaverse ambitions are more than just marketing fluff. He paid $2 billion for Oculus, after all, and Facebook has continually invested in VR development and content. You don't spend that sort of money if you don't have a vision for the future.

When he stopped by our demo, Zuckerberg told us he used to scribble code in his notebook during middle school. As soon as he got home, he would type it up with the hopes of building an immersive world to hang out with friends. Workrooms isn't the perfect VR collaboration solution yet, but it could be the start of what the younger Zuckerberg envisioned. After all, the metaverse won't be built in a day.