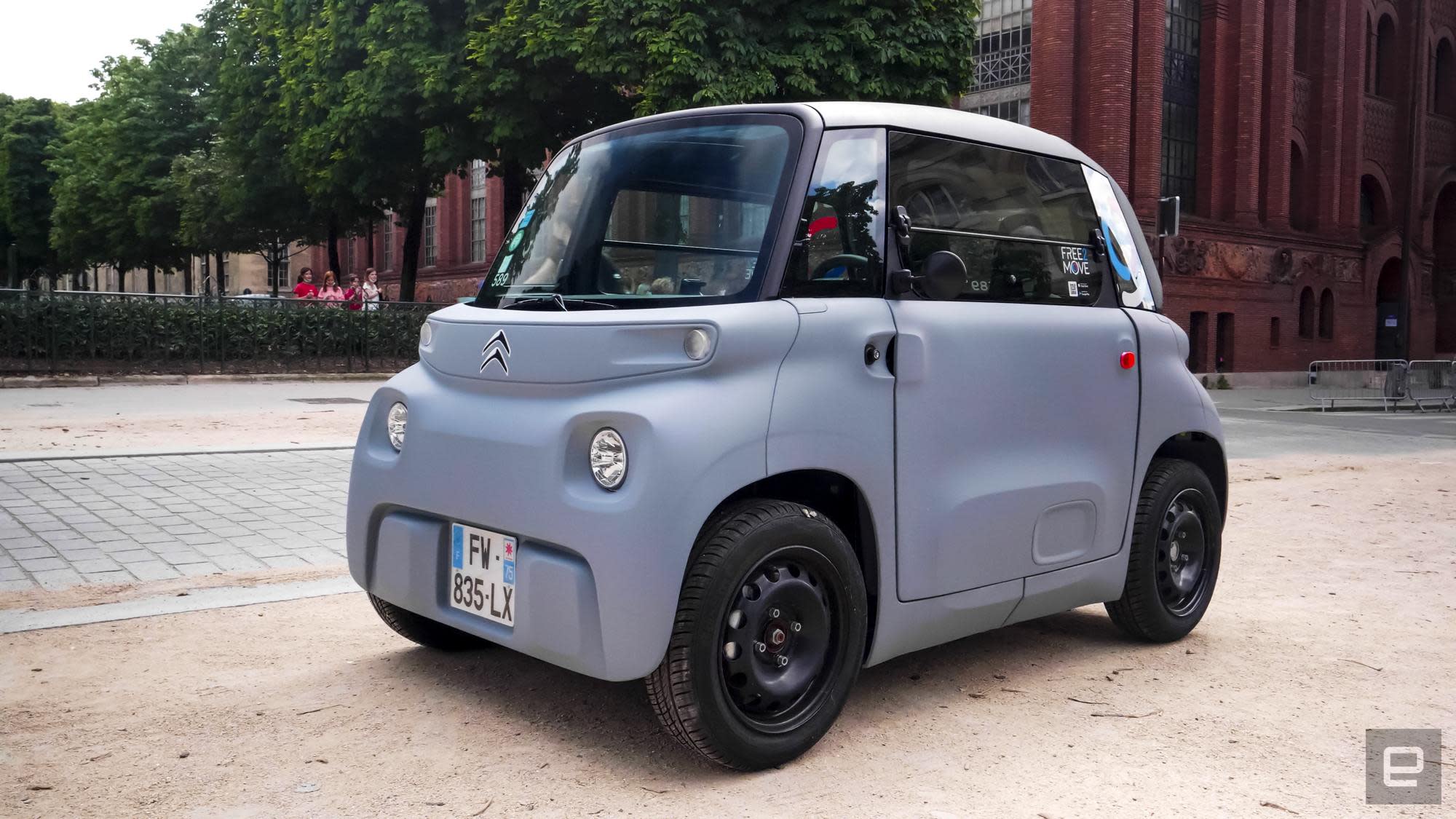 Available to drivers as young as 14 years old, it was built for jaunts around the city.

Car makers have gone on and on for years about so-called urban mobility solutions, but have you ever seen one on the streets? French automaker Citroen finally did something about that by transforming its adorable Ami concept into an actual adorable car with two seats and a top speed of 28 MPH.

By a quirk of French law, the Ami is not technically a car but a “quadricycle,” so users in the nation as young as 14 can drive it. But unlike Renault’s Twizy quadricycle, it’s a fully enclosed vehicle. That means you or your teenager could take it to get groceries or go to football practice without getting soaked in a rainstorm.

With its playful design and simple but functional interior, the Ami screams “fun” no matter your age. And for about $7,500 to buy, after French subsidies, or $0.65 a minute to rent, it’s pretty cheap. But what’s it like to drive in a city as chaotic as Paris? To find out, I strapped in and went for a spin.

The Citroen Ami is available in a variety of flavors for purchase, and you can pick one up at electronics stores Darty and FNAC. Prices range from €6,090 (about $7,385) for the basic Ami and run up to €7,495 ($9,090) for the Ami Vibe (after government EV subsidies). The latter comes with a colorful design scheme and includes options like custom wheels and a hands-free smartphone kit.

Along with the original Ami, Citroen recently introduced the Ami Cargo designed for small businesses and last-mile deliveries. That vehicle has extra storage space, along with a shelf, in place of the passenger seat. With those changes, it can hold up to 14 cubic feet of cargo weighing just over 300 pounds and it starts at €7,390 ($8,960).

A family might purchase an Ami as a city vehicle for themselves or their teenagers, and businesses might buy one for deliveries or as a cool marketing campaign on wheels. Another key market is car-sharing. Citroen parent PSA has a rental division called Free2Move which has a fleet of over 500 Amis in Paris.

It’s not going to be limited to France, though, as Free2Move recently teased that the Ami would join its rental fleet in Washington, DC. To that end, I wanted to test Free2Move’s rental version of the Ami, rather than the more upmarket retail version.

I got on Free2Move’s app and looked for an Ami in my neighborhood in Paris’ 14th district. After finding one about two metro stops away, I headed over there and located it. Like most of the rental fleet, it was a basic powder blue model, though Citroen created 20 special versions with wild colors matching different districts of Paris.

The first thing that struck me was just how small, and symmetrical it is. The Ami is just under 8 feet (2.4 meters) long, meaning it could easily fit sideways on most streets, and has a turning circle of less than 24 feet (7.2 meters). It weighs just 485 kg, or 1,069 pounds.

Another unusual feature of the Ami is matching color-impregnated plastic body panels all around the car. The doors are identical to each other, not just mirror images. That’s because the driver door is hinged at the back and opens toward the front, while the passenger door is hinged at the front and opens toward the back. Consequently, the body quarter-panels with the door locking mechanism are also identical.

The same is true around the vehicle, including the front and back, so the car looks the same whether it’s coming or going. Citroen did all of this to save on cost by making as many parts the same as possible.

The Ami’s mechanicals are similarly basic. It has a 5.5 kWh battery that’s good for about 70 km (43 miles) of range and an 8 horsepower motor driving the front wheels. The top speed is limited to 45 km/h (28 MPH), though it doesn’t feel like it could go much faster anyway. It has small 14-inch wheels and basic suspension to smooth out road jolts.

Since the Ami can fully charge off 220 volt household power in just three hours, it has a standard EU plug rather than a fancy cable. After charging, the cable can be tucked into a pocket in the door jamb.

The inside of the Free2Move rental Ami is basic, but surprisingly functional. It doesn’t even have door handles — rather, you open and close the doors using orange-colored straps. The side windows flip up and to the outside, and are your primary source of cooling. The windshield is so far away that I wasn’t able to touch it from the driver’s seat.

With that distant wind shield and panoramic roof, the Ami feels incredibly spacious considering the tiny size. Even in the regular passenger version, you can squeeze in a lot of cargo in front of the passenger seat or behind both seats. That makes it good for picking up shopping or heading to the train station with a suitcase. The driver’s seat moves back and forth but doesn’t recline, and the passenger seat doesn’t move at all.

The dashboard, such as it is, shows the speed, charge levels, warnings and not much else. The only controls are for the turn signals, a very noisy front fan, an emergency flasher and rear defroster. The car-sharing version of the Ami is missing a few perks seen on the retail version, like a smartphone holder and cargo nets. However, it does have a USB charging port.

Using the app, I was able to book the Ami, unlock it and power it up using the key attached to the vehicle by a cable. Once it was ready to go, I could select reverse, neutral or drive from push-button controls to the left of the driver’s seat. From there, I could just release the mechanical handbrake, push the accelerator and go.

With an 8 horsepower motor, performance is not exactly scintillating, but it does get to its top 28 MPH speed at a decent clip. In any case, the speed and acceleration are good enough to let you keep up with traffic and not be a safety liability. Just don’t go onto a freeway ramp by mistake. The brakes work well, but I barely used them as simply lifting up on the gas and using the regenerative braking is usually enough to slow the Ami or bring it to a halt.

The best way I can describe the handling is steady and reliable, with slow but fairly precise steering. With limited speeds and ponderous acceleration, one wouldn’t expect it to handle like a Formula 1 car, in any case. The ride is a bit rough on Paris cobbled streets and very loud, but at least you can hear the other cars and environment clearly.

There is fun to be had when maneuvering in traffic, though. With its tiny size, it can do U-turns on a dime, even on narrow streets. And you zip into holes in traffic (if you dare) and park it in the tiniest of spaces. Speaking of which, you can put any of the Free2Move Amis in any paid or EV parking space in Paris, free of charge.

A 5.5 kWh battery might not seem like much, but you can eke out about 70 km or 43 miles on a charge — more than enough for chores and commutes in a city like Paris. I drove from the south of Paris to the Seine river in the center and back — twice — and didn’t use more than about 20 percent of the battery. Even in slow-moving stop and go traffic, the range holds firm. That’s helped by the Ami’s relatively light weight and effective regenerative braking system.

Citroen touts the fact that 14-year-olds can drive the Ami in France, but you need to be 18 to rent one from Free2Move. As such, younger teens would need to own or borrow one. Even with the limited speeds, it’s hard to imagine a 14-year-old driving an Ami (or other permitless cars) in Paris, but it is legal to do so. It’s also legal across Europe for teens around that age to drive Vespa-style scooters in cities, and the Ami might be a safer (though less fun) choice.

So what’s my verdict on the Ami? You’ve got to give Citroen props for making a true stab at urban mobility, especially with a quirky and relatively cheap car like the Ami. The move seems to be paying off, considering that its parent PSA is confident enough to bring this very French car, er, quadricycle, to the USA.

It’s easy to see why when you drive one, though. It’s perfectly suited to its commuting and delivery mission, is a ton of fun to use and draws more smiles than almost any car I’ve driven — even from jaded Parisiens. It’s more practical though not quite as much fun as Renault’s Twizy, and around half the price. Other so-called permitless cars, and even scooters, can also cost more.

In Paris, the Ami is a great way to commute, get groceries and do other chores. It’s much greener than most other vehicles and certainly safer than an e-scooter.

However, France has unique driving laws that allow such cars and young people to drive them. It’s still an open question as to whether it will work in a city like Washington DC, but I’m very curious to find out once they arrive.