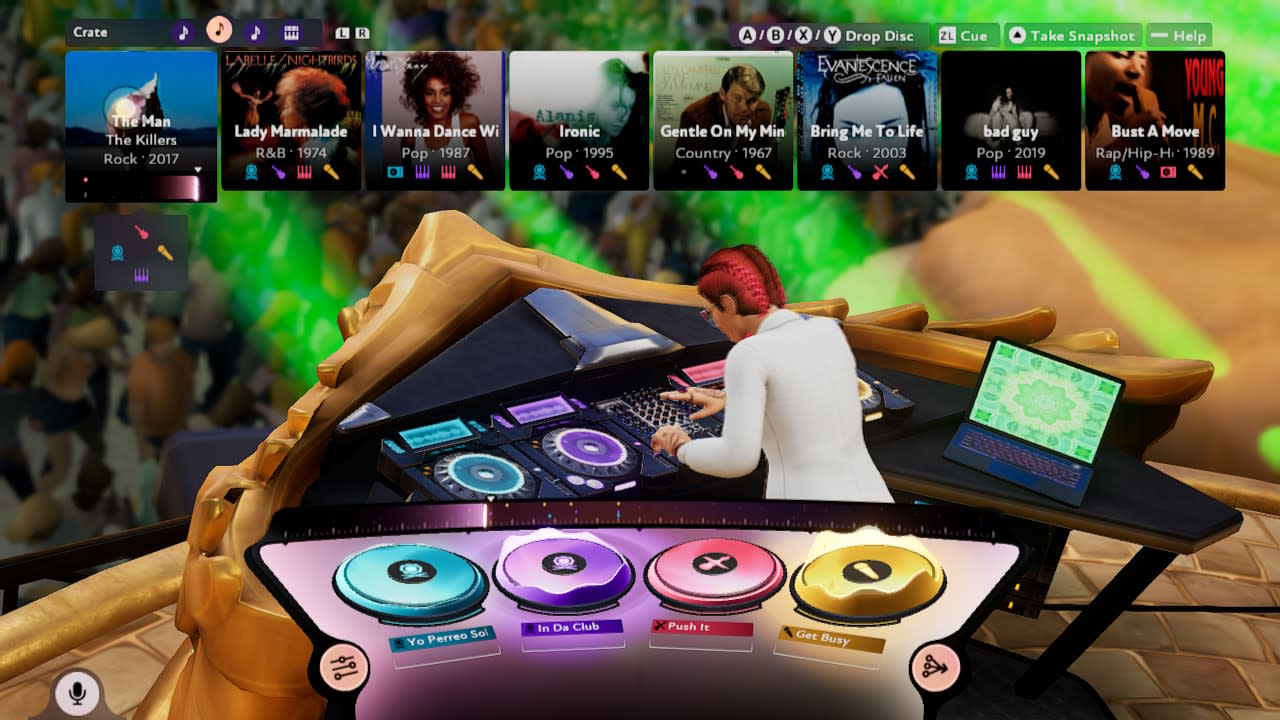 ‘Fuser’ is a complex music game that can still please newbies

The campaign mode is a bit of a dud, though.

The phrase “perfect pandemic game” is one that’s been thrown around quite a bit this year, awarded to various popular titles like Animal Crossing: New Horizons and Among Us. Now that I’ve spent a few weeks with Harmonix’s concert DJ simulation game, Fuser, I’m starting to think it should be added to the list.

When I first played Fuser back in March, I talked about how it was the culmination of a lot of things that developer Harmonix has done over the years. The game’s Rock Band roots were obvious, but you might not remember its other precursor, Dropmix, a card-based title produced in partnership with Hasbro. That game involved using special NFC-enabled cards on a Bluetooth-connected board to mix up various tracks. There was a game in there somewhere, but it wasn’t as much fun as just throwing cards down to see what sick beats you could create. The biggest downside was that it was expensive: The board with a starter deck of 60 cards originally cost $100, and expansion card packs went from $6 - $15.

Harmonix games have always been expensive thanks to all the accessories you needed to buy to play them. Sure, you could manage with a controller but that wasn’t the point; you wanted those guitars and that drum set to really feel like you were performing on stage. This generally made the Rock Band series very social. If you invested in a full set you made damn well sure you had friends to play it with. Even the non-gamers in your life were intrigued when they saw a plastic guitar sitting near your couch, tempting them with its bright colorful buttons.

Of course now, we’re not exactly dropping by our friends’ houses on a whim anymore. Most of our video game activity has moved online, and that was true even before the pandemic. But being home all the time has also made us more sensitive to the clutter in our lives, and less tolerant of plastic junk sitting unused next to the TV. That’s one major advantage that Fuser has over its predecessors: There are no toy guitars and no cards to purchase. There are no drum kits to accidentally trip over. When you want to play, you simply pick up a controller and start the game.

Fuser has a freestyle mode that you can start up any time, but the songs, stages and effects available will be limited by what you’ve unlocked in the campaign mode. And the campaign mode is… rough. There’s a lot wrong with it. But it also might be necessary, because Fuser is a very, very deep game whose surface I’ve only begun to scratch.

The story of the campaign mode is that you’re a DJ just starting out on the concert scene, and you’re being given a time slot to show your stuff. Each set you do will explain one of the game’s many features, and you’ll be expected to use whatever the game’s just explained to you in order to successfully complete that board. It starts off easy enough, with the mode just asking you to do basic things like drop a record on the table. At the top of the screen is a gallery of albums that you can highlight with the cursor, choosing a particular part of that music to “drop” into the mix like vocals or percussion.

It seems easy but the game warns you that you’ll need to keep the crowd’s interest by switching things up constantly. It’ll throw challenges at you, asking for tracks from certain decades, or even specific songs. Keeping up with audience requests is another curveball the game will bring up during this glorified tutorial, as you’re on a time limit to fulfill those before the crowd gets mad.

As you continue through the tutorial, the game will introduce even more complex features, like being able to keep two records on a turntable so you can switch back and forth and, of course, crossfading. There are even synths in the game so you can create your own tracks to loop into the mix. It’s an enormously complicated set of tools that I sometimes feel ill-equipped to handle and have wondered if my more musically inclined colleagues should be the ones taking this game for a spin.

As a gamer, though, I find it rather frustrating. The campaign holds back the features it’s not explaining, probably to avoid confusing the player, but it also still scores you. And it is easier to get a better score with more functions available to mix with. The scores are important because certain outfits and instruments are only unlocked once you’ve gotten at least three or four stars on a board. So, while it is possible to set the game on “no fail” mode and just force yourself to grind through the whole campaign to unlock most of the basic features, you’ll still need to jump back in if you want the entire game you paid for.

The cut scenes are also teeth-grindingly bad, with silly costumes and bad accents. I played the Switch version, which also had some problems rendering these scenes. I assume they work fine on PlayStation, Xbox and PC but even then, you can skip them. What you can’t skip is the ridiculous and embarrassing dance your DJ does before their set. I die a little inside every time. But at least it’s brief.

The real magic is in the freestyle mode, where you can play with all the unlocked features and tracks, and just noodle around to your heart’s content. In this mode it’s just a robust music-making tool, one that at least offers spectators something to look at while the music plays. Part of your “stage kit” is the ability to choose what kind of effects your virtual concert will have. I can’t say it really alters the experience significantly, but it’s appreciated. And of course, you have your customizable avatar, with a number of body types to choose from. It’s not separated by gender in any way, so you can put on whatever clothes, hair and accessories you want to complete your look. I’ve been seeing nonbinary options in games a lot more lately and I do appreciate it.

The real star of the game, of course, is the music. The base game comes with 100 songs to start, with an additional 25 available at launch, which can be purchased separately or as part of the $99 VIP edition. It’s a pretty good mix of artists, genres and eras, from Donna Summer’s classic “Hot Stuff” to this year’s “Yo Perreo Sola” by Bad Bunny. You might not like every track, but there are still plenty of tracks that you will probably fall back on — I’m partial to Lizzo’s “Good as Hell” and Salt-N-Pepa’s “Push It.” In the campaign mode the game will make certain tracks mandatory so you’re not caught unprepared for an audience request, while freestyle is completely unscored and untimed so you play whatever you want.

Since the game came out in November, Harmonix has been dropping new tracks every week along with new cosmetic features. You can grab songs like Weezer’s “Buddy Holly” or Lizzo’s “Juice” for $1.99 each, which might not seem like much but it will add up.

But here’s the thing: It might be worth it if you turn the game into a social activity. Just like you bought those plastic instruments to jam with friends back in the Rock Band days, kitting out your copy of Fuser into a sort of “party pack” might be worth it. Now, you could play online with other people who also have the title — there are DJ battles and other online multiplayer options, which I haven’t tried because I don’t know anyone else who has Fuser — but you could easily try streaming your game through Twitch, YouTube, or even Zoom so your mom can see what you’ve been up to.

Unfortunately, this isn’t going too smoothly right now, with some streamers getting DMCA takedown requests thanks to the game’s heavy use of licensed music. But when it does work out, you can always invite your friends into a virtual dance party akin to Turntable.fm. I’m sure a few of your friends miss going to clubs and concerts, and Fuser at least captures some of that energy with its weird music mashups and strange graphics.

However, once it’s safe for all of us to gather safely again, I’d say the Switch version might be your best bet. The game might run better on PS4 or Xbox, but on the Switch it’s more shareable when you’re actually in a room with other humans. I used to bring my Wii to family gatherings all the time back in the day, and a few years ago I tried to get my family into Dropmix but the sheer amount of pieces and wires I needed to bring along made both of these game experiences impractical. One of the selling points of the Switch is that it’s a home console you can bring anywhere and, if your host already has a dock hooked up , you can easily sub your Switch in with your fully tricked-out and unlocked game of Fuser.

So, while Fuser is far from perfect, what it does well is great for these socially isolated pandemic times. It scratches that live performance itch (and maybe reminds you how embarrassing festivals are). It has a robust set of tools that will take you hours to fully experience and master. But it’s still appealing to casual gamers — doubly so because it doesn’t require you to drop hundreds of dollars to get started.

All products recommended by Engadget are selected by our editorial team, independent of our parent company. Some of our stories include affiliate links. If you buy something through one of these links, we may earn an affiliate commission. All prices are correct at the time of publishing.
View All Comments
‘Fuser’ is a complex music game that can still please newbies