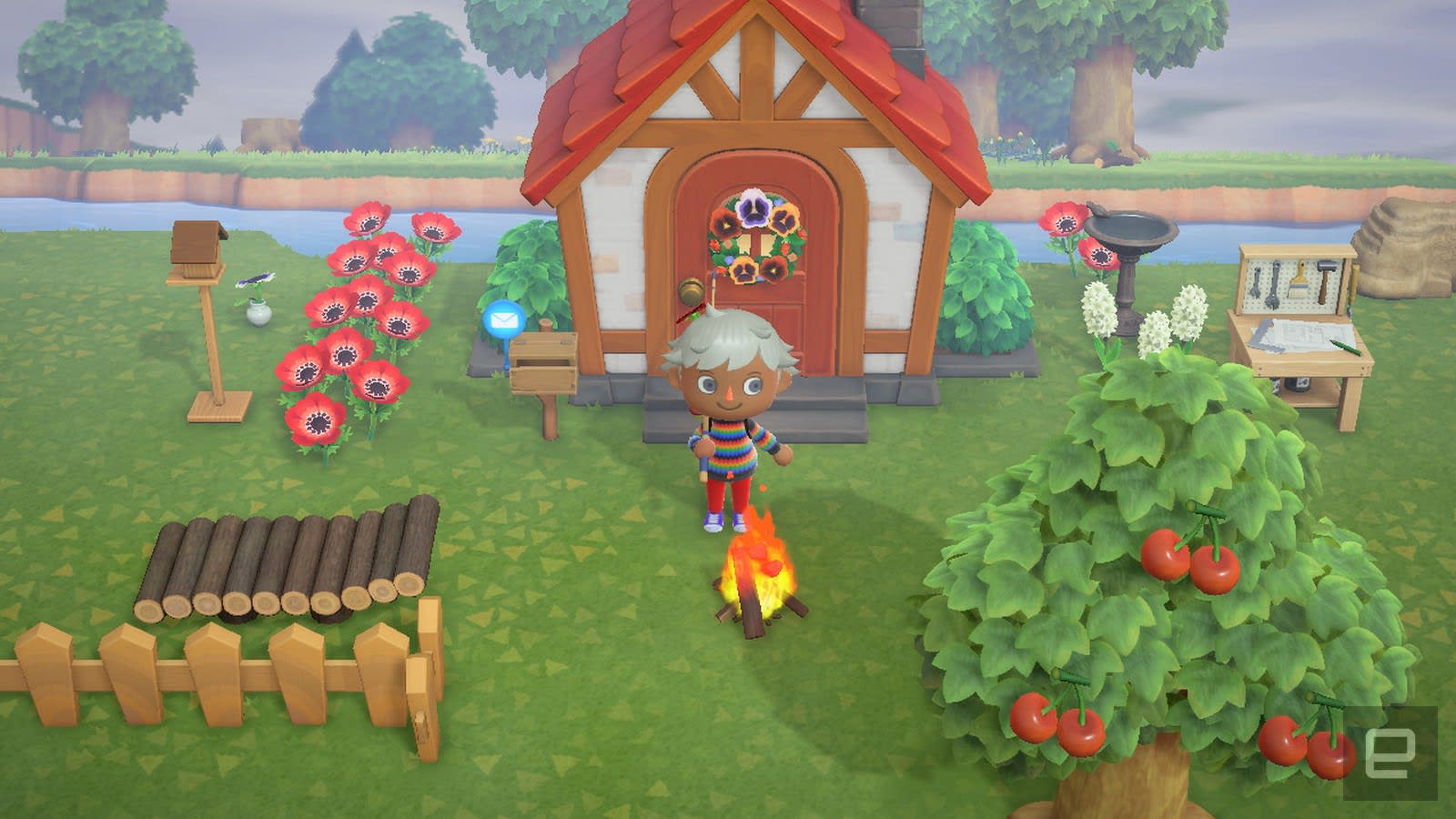 ‘Animal Crossing: New Horizons’ is the island escape we all need today

What better way to cancel the apocalypse?

How do you review something like Animal Crossing: New Horizons? It's not like most games: There's no plot, no leveling up and no bosses. You can never beat Animal Crossing -- and, conversely, you can't lose. Instead, you play a bit every day, shaping your adorable house and village into the most idyllic environment possible. That's a template the series has honed since its Nintendo 64 debut, and with New Horizons on the Switch, which lands on March 20th, it's evolved into a truly meditative and relaxing escape from reality. And honestly, that's just what we need today, as our society reshapes itself around the specter of a global pandemic.

For the uninitiated, every Animal Crossing game starts the same way: You play as a human who moves to a small town filled with anthropomorphic animals. An entrepreneurial raccoon named Tom Nook helps you find a home, while also burdening you with a hefty mortgage. And then you're off to do whatever you want: fish, catch bugs, chat with your neighbors. New Horizons changes things up a bit by offering a lot more customization from the beginning.

Instead of being placed right into a village, you start off at a ticket counter, where the adorable Timmy and Tommy Nook start planning your upcoming getaway to a deserted island. You can choose between a spot in the northern or southern hemispheres, which determines the weather, as well as four different island layouts. (I stuck with a northern island to sync up the weather with New York City.) And, this being an international trip, you'll need to show your passport photo, which doubles as a character generator. You can shape your hair and face to your liking, but best of all, you can finally customize your character's skin tone. Previously, you had to go through an annoying tanning process for a darker complexion. 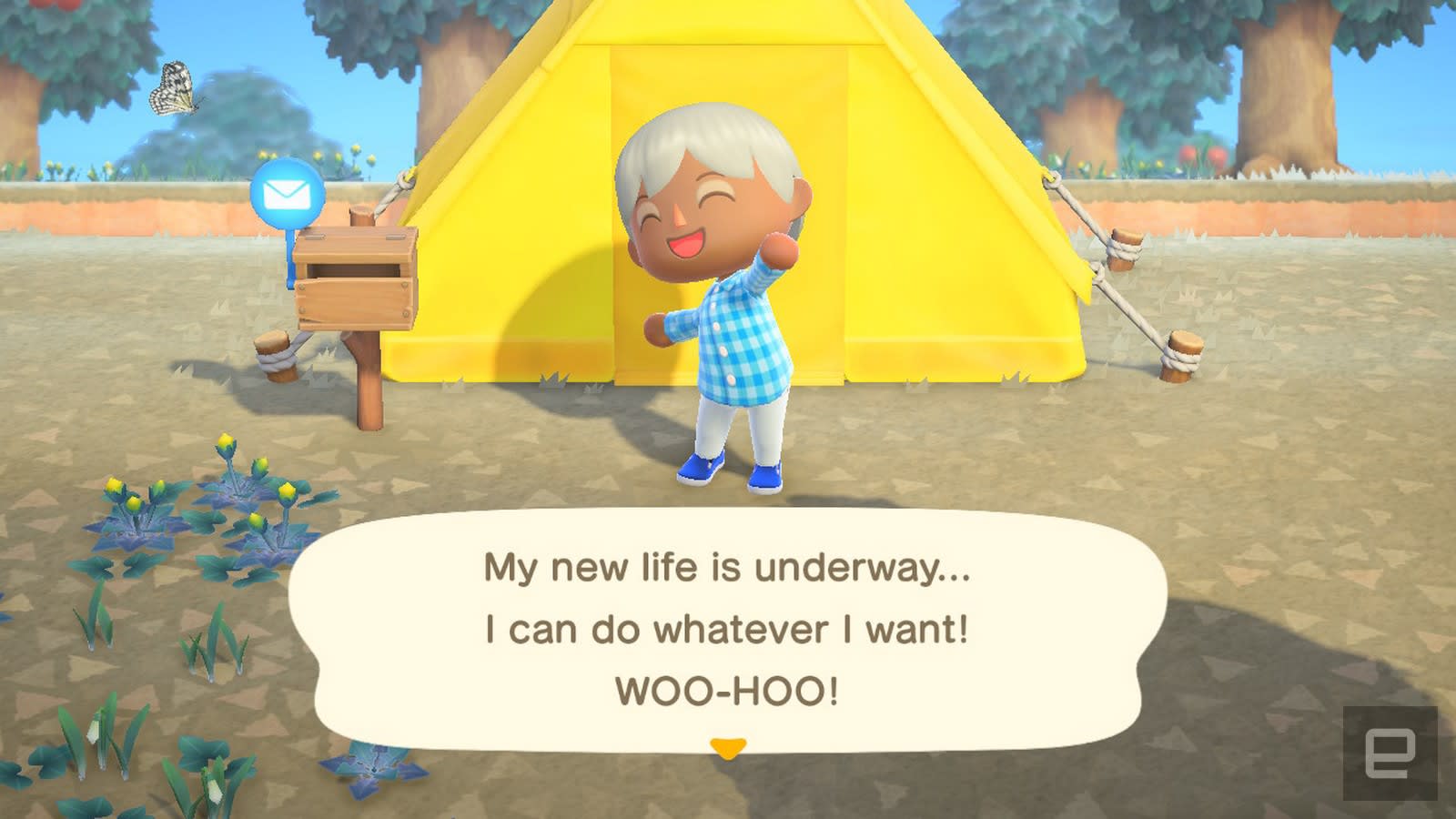 That extra bit of representation goes a long way. I was immediately more connected with my brown-skinned character (sporting blazing white anime hair, because that's how I really see myself), than I was with the simple models from Animal Crossing: New Leaf on the 3DS. As I picked the ideal spot for my tent -- with a river to the north and the ocean to my west -- I visualized the sort of area I'd love to escape to in real life, away from anxiety-inducing headlines and reminders of the fragility of modern society.

A quick walk around my new home island "Lostia" (I never said I was very original) made it instantly clear how much of an upgrade New Horizons is. Every new entry in the series is typically an evolutionary leap, thanks to hardware advances. But this time around, it's even more charming than I expected: the jagged edges and simple textures from the 3DS have been replaced with smooth 3D models and luscious colors. Every area on the island -- from forests rustling in the wind to wave-lapped shores -- is painstakingly detailed and alive, responding to the weather and time of day. Playing New Horizons is like jumping into an interactive storybook. 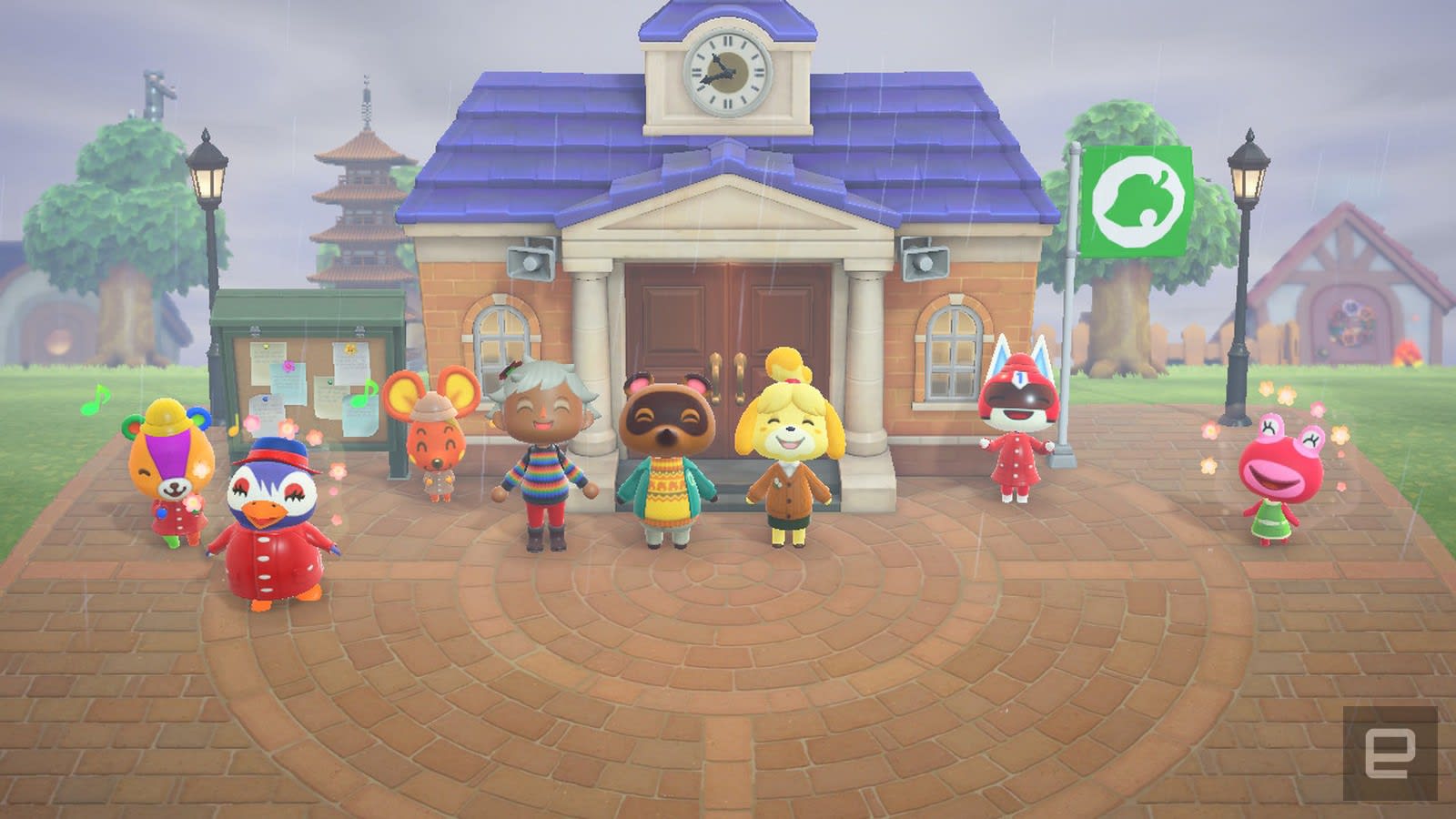 And given this is a game where you're mainly exploring the world and interacting with other villagers, Nintendo has paid close attention to every character model. Tom Nook and his raccoon kin have never looked cuter and more expressive; the sea-faring seagull Gulliver's shiny beak glistens in the sun every time he washes ashore. Every character is unique and expressive, which makes it particularly thrilling whenever you run into visitors and new community members. That level of detail carries over to your character -- your hair styles and outfits are endlessly creative, and you'll never tire of finding hip new accessories.

New Horizons is more than just a graphical upgrade too: Every sound element is crafted to be as chill as possible. The game's main theme, a gentle tune led by a soft trumpet and ukulele melody, captures the mood perfectly. It evokes nostalgia while hinting at wonder and adventure ahead. It's like something you'd find in a slice of life anime series, where there's often very little plot, just characters going about their lives.

Beyond the music, the game's sound design deftly bottles the experience of living on a remote island to ASMR levels of brain-tingling joy. I found myself reveling in the moments where I could put on a pair of great headphones and listen to the wind blowing through the trees, or the sounds of insects on a quiet chilly night. I'll probably never live by the seashore, but I'll always be able to fish by the calm seaside in New Horizons. It's as if the developers tried to bottle up every sound of nature that relaxes humans -- just in time for us to be locked in our homes as we self-quarantine against coronavirus. 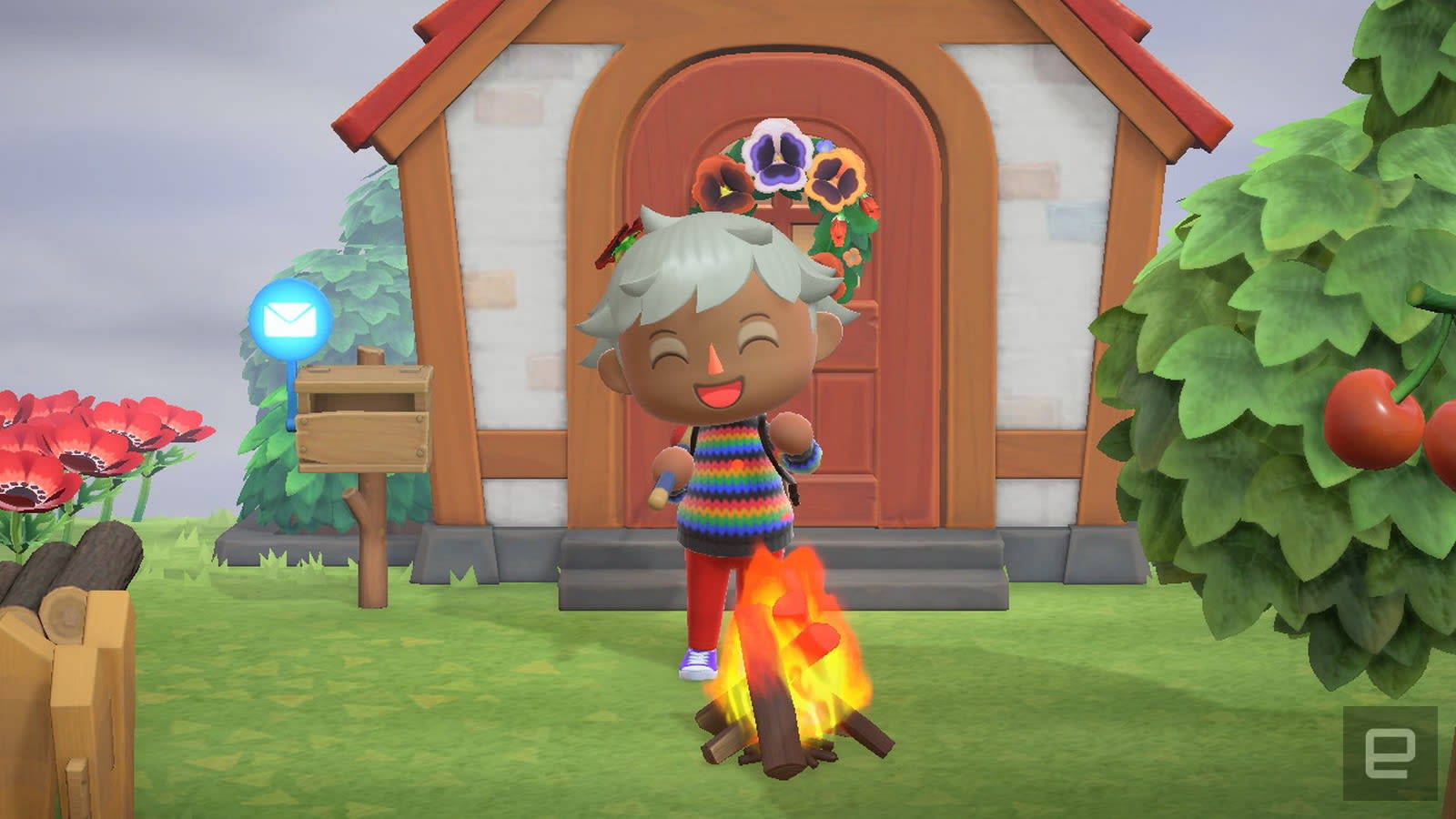 Once your camp is set up, you'll get a "Nook Phone" from Tom Nook that serves as your main progress hub. (Of course he's a tech CEO now too.) It'll help you keep track of DIY crafting recipes, which you can use at workbenches to build new items; earn Nook Miles, a currency based entirely on things you do; design custom items; and even get rescued if you manage to get stuck somewhere on the island. There's also a camera mode for capturing the perfect in-game selfie.

Nook, the capitalist monster that he is, doesn't waste time burdening you with a bill. But unlike other Animal Crossing games, you can pay off the cost of your trip through Nook Miles, which you earn quickly early on by doing things like collecting weeds, chatting with your neighbors, and in general being a solid member of the community. You can also use those miles later on to buy specialty equipment and more crafting skills. It didn't take me long to pay off Nook, but then he dangled another carrot in front of my world-weary millennial face. A home of my very own! How could I say no? 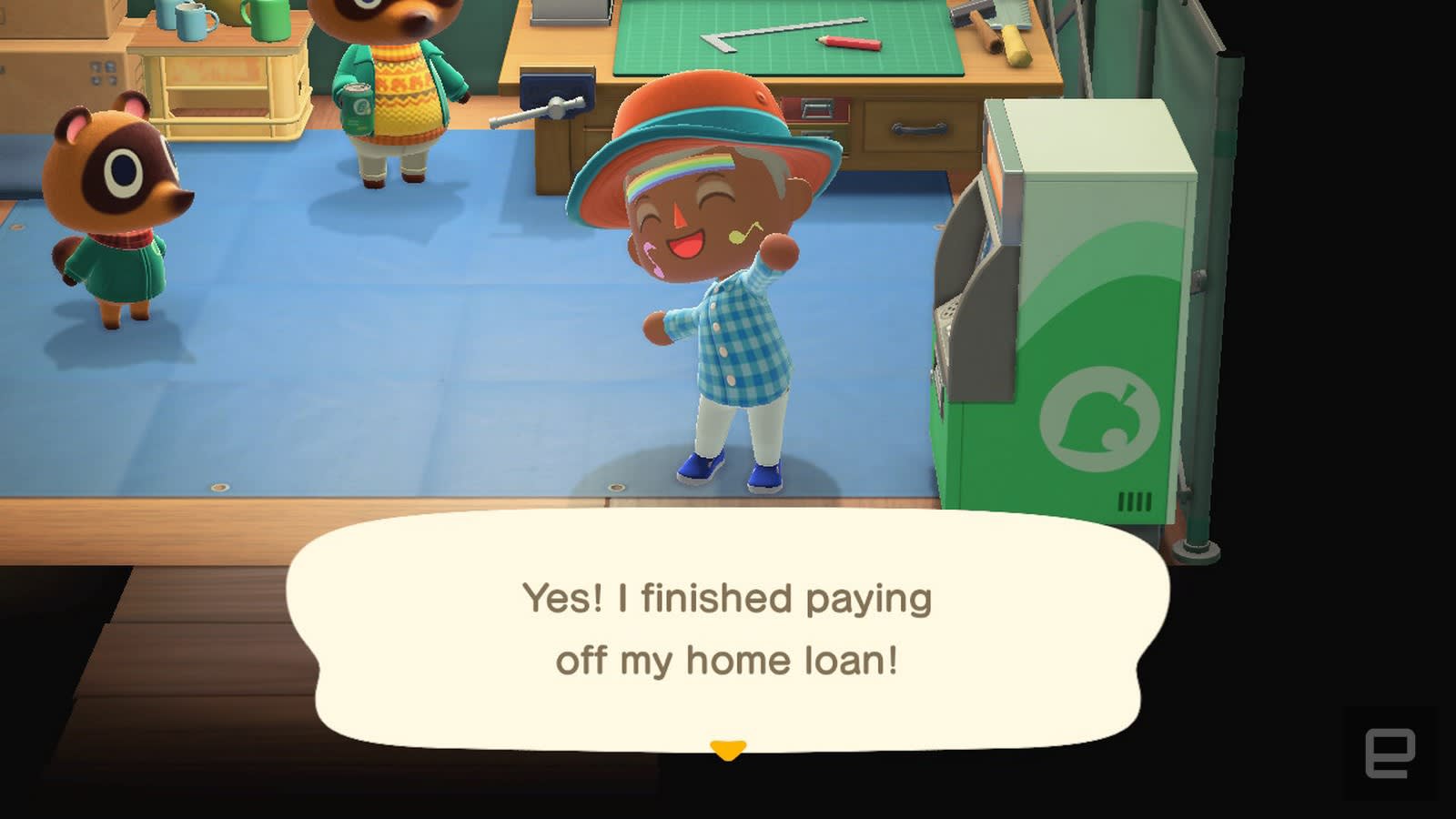 And so began my frenemy relationship with Nook, someone you always end up owing in Animal Crossing. He means well, but you'll quickly notice you end up doing most of his grunt work. Compared to the real world, though, he's an angel. Nook may charge you an eye-popping amount of bells to upgrade your flimsy tent into a genuine home with a roof, but there's no interest on your debt, and no forced payment schedule. You just need to explore your town, earn some cash, and pay it off whenever you can. That's infinitely better than dealing with college loans in your thirties and fighting with banks and our insane credit system to own a home.

DIY crafting, which debuted in the Animal Crossing: Pocket Camp mobile game, also changes up the flow of the series for the better. Instead of just earning money to buy furniture, clothes and other accessories, you can build them on your own, assuming you have the proper materials. That makes chopping wood, mining for stone and metal and collecting cherries far more rewarding than previous titles.

Unfortunately, I haven't been able to try the local or online multiplayer portions of the game, but I'm definitely looking forward to sharing my island experience with friends down the line. And if you share your Switch, you better get used to living on a single island with everyone else in your household. That seems like a particularly draconian move by Nintendo -- the only way to get multiple islands is to buy more copies of the game, or share a single copy across multiple consoles. I also didn't get to test the New Horizons features in the Switch Online App for smartphones. It's your gateway to voice chatting with friends, and you'll also be able to scan QR codes for unique items from older Animal Crossing games. 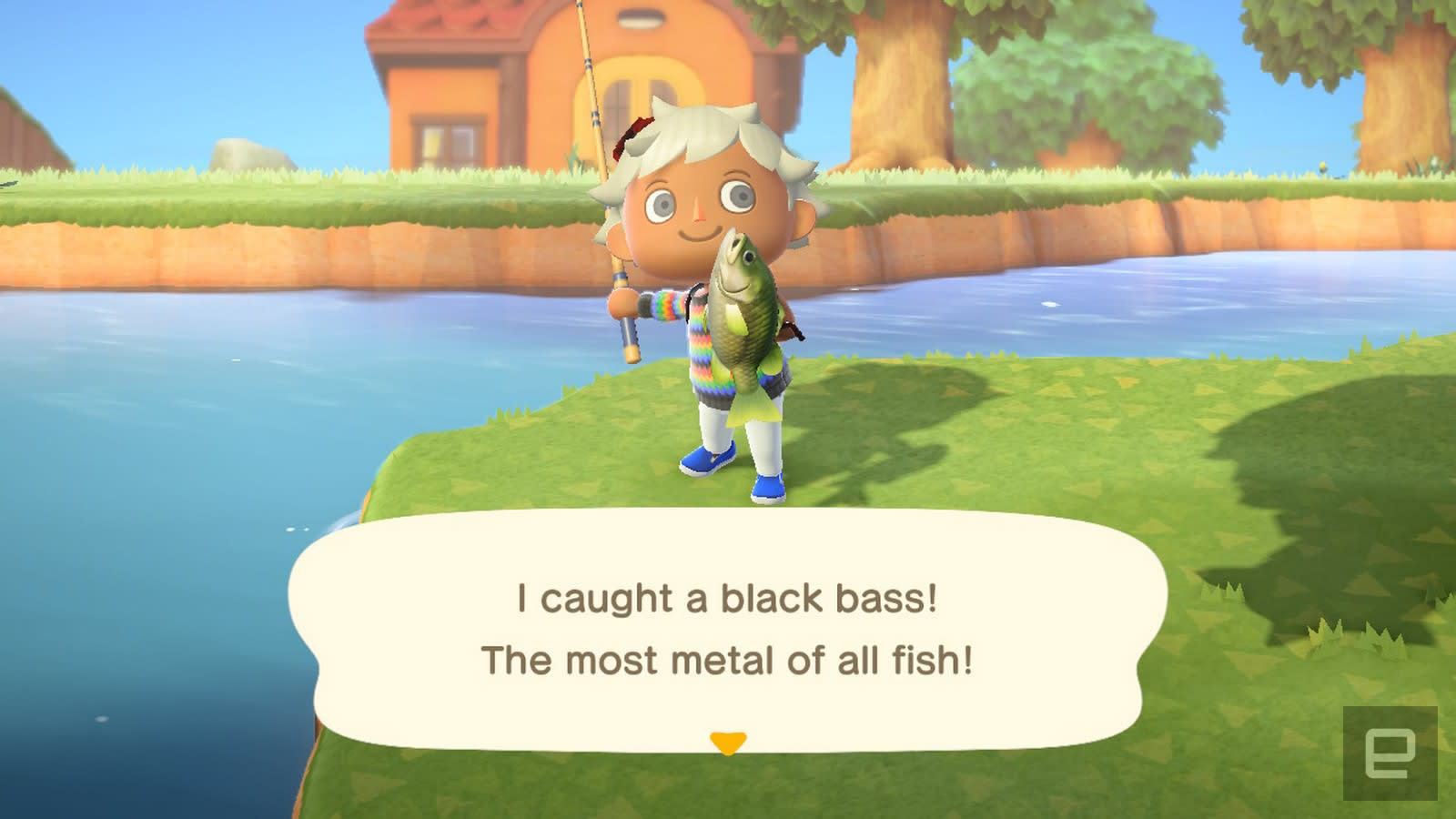 After diving into New Horizons for about 12 hours, my island utopia has finally started to take shape. There's an impressively large museum to display the fossils and animals I've collected. I helped construct a thriving store run by the Nook kids. And my house is shaping up into quite the bachelor pad, with an expensive stereo, a grown-up reclaimed wood bed and a microphone for my dreams of in-game podcasting. More so than any Animal Crossing before it, New Horizons has become a calming ritual for me. I look forward to checking on my island every morning, greeting newcomers, and taking another look every night to sell items before the shop closes. 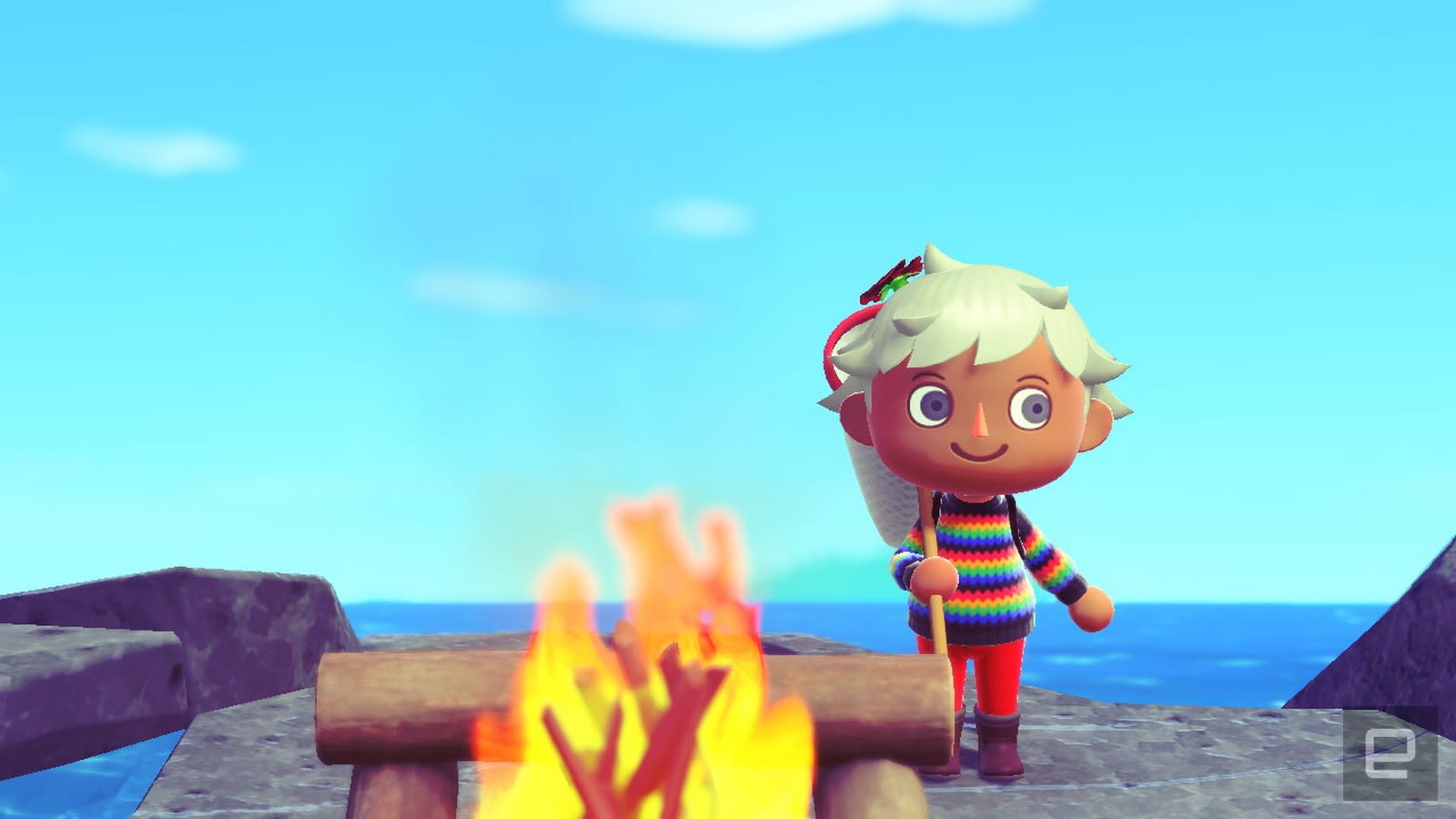 It may seem a bit frivolous, but all of the time I spent in the game was time spent avoiding political fights on Twitter, news about how we're ill-equipped to fight the coronavirus, and fretting about the fate of our civilization. Every moment spent in New Horizons is a moment I can breathe a bit easier, which feels like a miracle today.