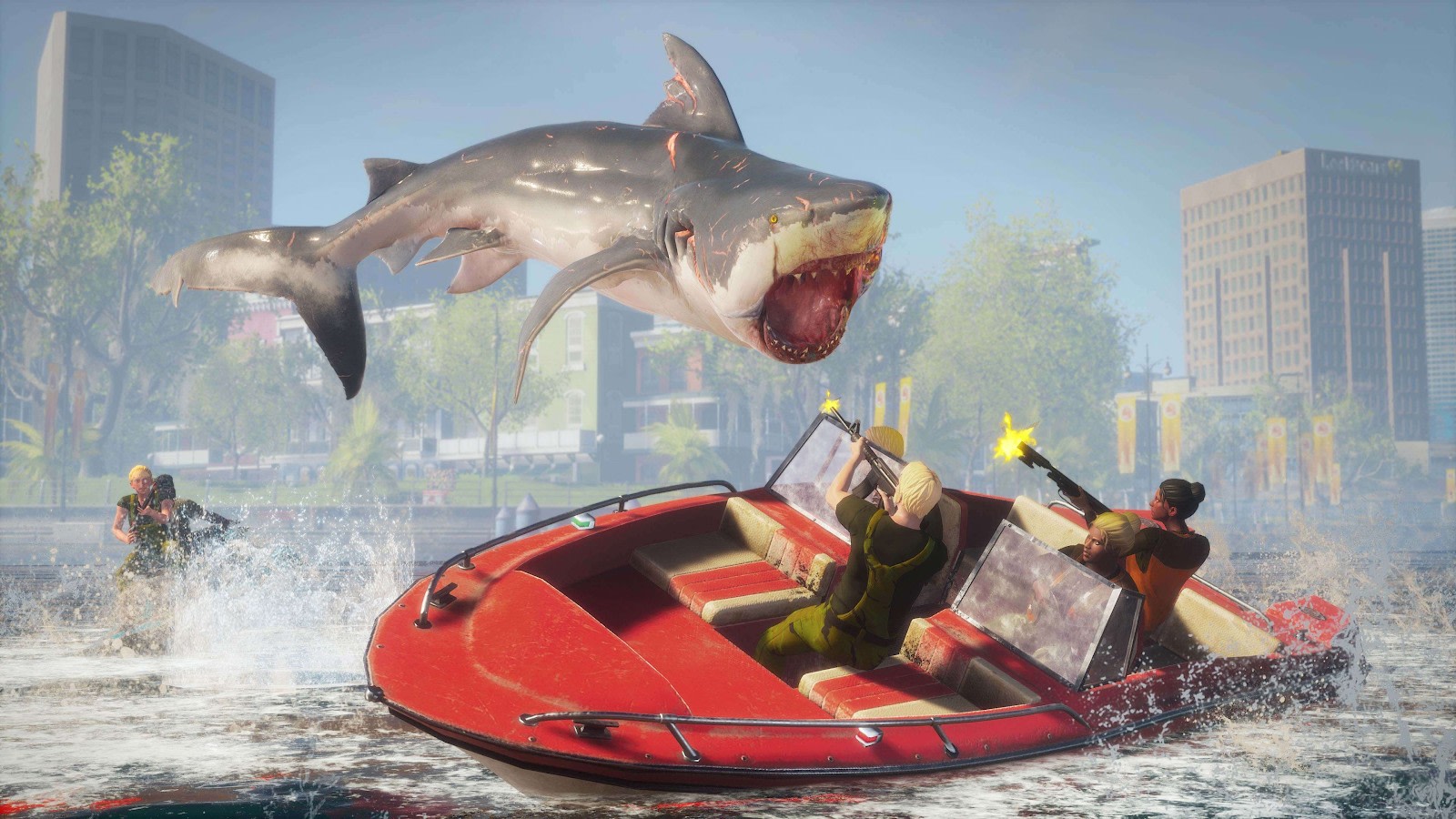 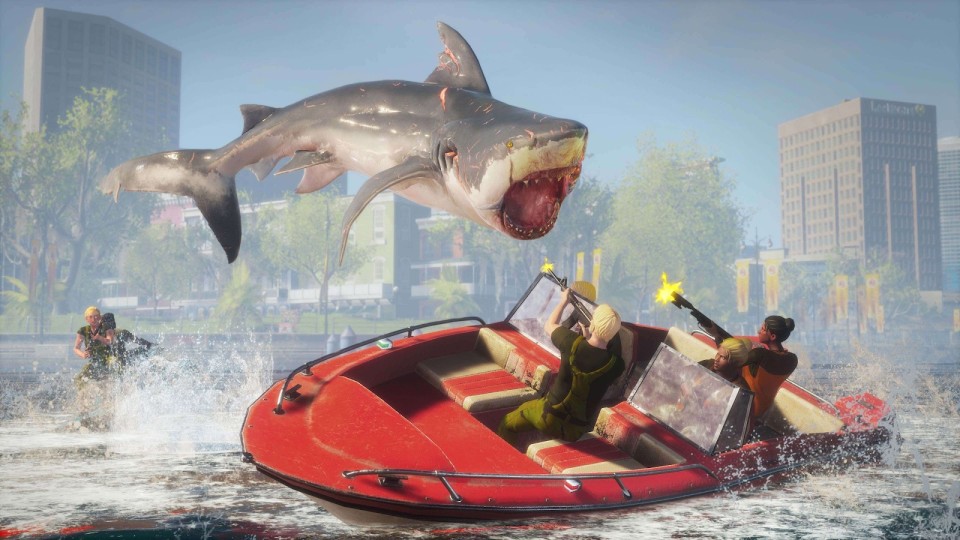 Maneater is a third-person shark sim and I flippin’ love it. Billed as a “SharkPG” by Tripwire Interactive, Maneater follows the exploits of a severely wronged bull shark. Cut from her mother’s belly at birth by famed hunter, Scaly Pete, and disfigured in her escape, our heroic Carcharhinus cuts her teeth patrolling the shoals and coasts of South Florida in search of revenge, growing from a level 1 pup barely able to take down a trout, to a level 30 Megalodon gleefully chewing through entire armadas of coast guard ships.

The goal of this game is to eat everything in sight and then wash that meal down with anything dumb enough to think it could hide from you the first time through. The main gameplay mechanic in Maneater involves you cruising through the water, monching on anything you can fit down your ever-growing gullet and avoiding larger predators until you’re big enough to bite them down to size. Your developmental progress is measured by how many nutrients in total you’ve consumed of protein, fats, minerals, and mutagen.

The various catfish, salmon, seals, mahi mahi, alligators, parrot fish, mako sharks, marlins, orcas and sea turtles (to name a few) that you can consume each offer a specific nutrient that you’ll need to progress and upgrade your abilities, those of which can be earned through collecting items, finding hidden areas or defeating the game’s 10 sub-boss shark hunters and their minions. You won’t be able to go up against every enemy or conquer every challenge from the start, which encourages players to return to previously explored areas to unlock additional secrets once they’ve grown into their teeth a bit more. Eventually you’ll be able to grip and thrash prey, stun adversaries with tail whips, unleash powerful special attacks and even belly flop across broad expanses of South Coast golf courses in search of bipedal snacks.

Now, this is not a particularly difficult game. There really aren’t any mind-bending puzzles to solve beyond what to eat first. Sure, there are plenty of insurmountable challenges and enemies you’ll want to not face for the first three-quarters of the game -- from landlocked collectibles to level 45 sperm whales -- but the solution is simple, direct and constant: go eat everything smaller than you until you level up enough to take on the big boys. You’ll eventually unlock three power types -- Bone, Bioelectric and Shadow, which grant you increased defense, attack, and speed, respectively -- though you can mix and match various heads, dorsal fins, bodies, and tails together to generate a shark even Jaws would wave off.

Honestly, the methodic advancement and development of deadliness that this game offers is extremely comforting in these uncertain times. We as a people have been collectively thrust into an age of madness and pitted against a trifecta of disease, economic disaster, and cop riots with little hope of things ever going back to “the way they were.” Our situation is legitimately crazy-pants bonkers right now and literally nobody really knows how this will pan out over the next six days, much less the next six months. But damn if chewing my way through a beachfull of pasty Floridians, who are just bobbing there in the shallows like portly COVID-spreading harvest apples, and then sinking the dozen shark-hunting ships who come for my fin doesn’t feel just a little bit empowering.

Maneater will take you around 30 hours to complete if you go for every collectible, but you can easily blow through it in a weekend if you stick to the storyline alone. You can snag it for $40 from the Playstation and Microsoft stores. It’s expected to be released on Switch later this year.

In this article: Maneater, Tripwire Interactive, sharks, gamingirl, news, gaming
All products recommended by Engadget are selected by our editorial team, independent of our parent company. Some of our stories include affiliate links. If you buy something through one of these links, we may earn an affiliate commission.