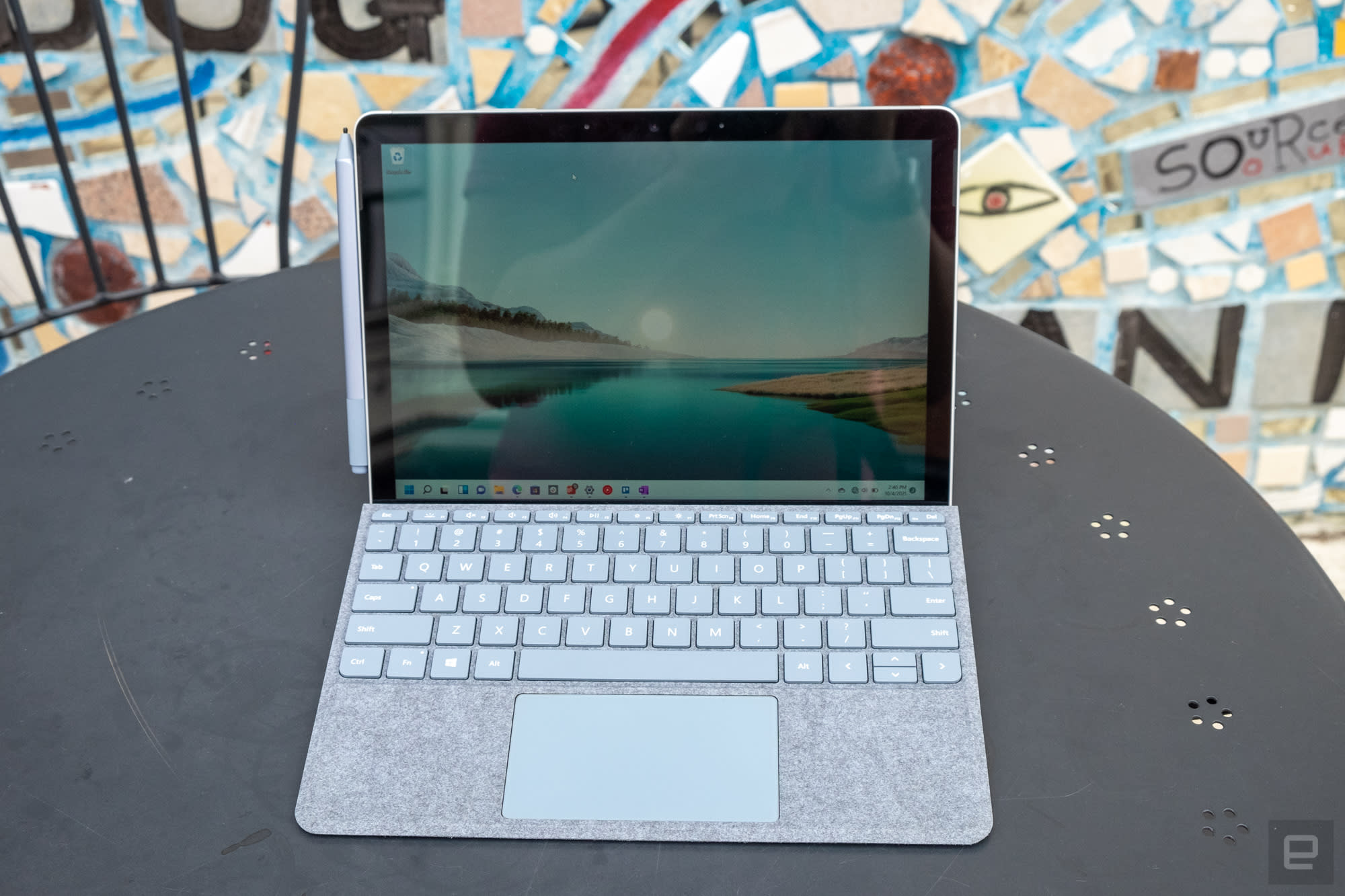 Microsoft has been trying to straddle two different worlds with the Surface Go. When it launched in late 2018, Microsoft positioned it as an inexpensive way to get the 2-in-1 Surface experience. Three years later, that’s still true: The Surface Go 3, which Microsoft unveiled in late September, is an exceedingly well-built tablet, with a lovely screen and strong kickstand. For a device that starts at $400, it feels great.

But the full truth of the Surface Go 3 is a little more complicated. You need to shell out at least another $100 for a keyboard. And, seeing as Windows still doesn’t offer a great tablet experience you need the keyboard. Not to mention the basic $400 Surface Go 3 is underpowered – so by the time you’re buying a keyboard and bumping up the processor, storage and RAM, you’re spending as much money as you might on a full-fledged laptop with a larger display and more powerful internals.

Our review unit came with a 10th-generation Intel Core i3-10100Y processor, 8GB of RAM and 128GB of storage. But that configuration costs $630, not including the $130 Alcantara-clad Type Cover and $100 Surface pen Microsoft sent along as well. It’s a fairly capable machine despite its tiny size, making it a potentially great travel companion. But if you’re going to spend $860 for the kit that I’m testing, you should know exactly what you want to do with it that you can’t do with a standard laptop.

When we reviewed the Surface Go 2 last spring, we noted that it was nearly identical to the first version, with the notable exception of a larger screen. This time out, I’m pretty sure the external hardware is completely identical. The Surface Go 3 is the exact same size and weight as its predecessor, and the display is the same 10.5-inch, 1,920 x 1,280 touchscreen as before.

That’s not a knock on the hardware, though, as the Surface Go 3 is a wonderfully designed and constructed device. I haven’t used previous Surface devices extensively, but Microsoft’s reputation for thoughtful hardware is well deserved. The screen is bright, sharp and colorful, with great viewing angles. I also very much appreciate the taller 3:2 aspect ratio – a 16:9 panel here would feel very cramped for vertical space.

I’m also a big fan of the infinitely adjustable kickstand. I’m no visual artist, but the way you can push it nearly all the way around to prop up the tablet for drawing is a brilliant design decision, and the way the Surface Pen magnetically snaps to the side for easy access is very handy. It really makes me wish I could draw, but alas.

As before, the Surface Go 3 only has a few ports and buttons. There’s a USB-C port on one side as well as a headphone jack and Microsoft’s proprietary charging port. The good news is you can use the USB-C port for faster charging (as well as any other peripherals you have) and use the cables you probably already have instead of the slower charger. Up top, there’s a power button and volume rocker; an 8-megapixel camera stares out from the back of the tablet. Two stereo speakers flank the display, and there’s a 5-megapixel front-facing camera with a 1080p resolution for video calls. It also works with Windows Hello for face unlock. Finally, under the kickstand you’ll find a Micro SDXC card reader, but you really have to go searching for it.

Every time Microsoft releases new Surface tablets, questions follow about whether Windows is actually a viable platform for touchscreen use. With Windows 11, the answer is still “not really.” But purely on the strength of its hardware, the Surface Go 3 is a lovely tablet. The 3:2 aspect ratio makes it work well when holding it in either portrait or landscape mode. And at 1.2 pounds it’s a little heavier than an iPad, but not so much so that you’ll get tired of holding it.

We typically recommend Surface buyers use the device with some kind of keyboard, so nearly all my time testing the Go 3 was with Microsoft’s Type Cover attached. It’s unchanged from last year’s version, but that’s OK because Microsoft’s Surface keyboards are surprisingly good. Given the Go’s small size, it felt a bit cramped at first, but after giving my hands a little time to adjust it wasn’t an issue.

The keys have decent travel and feel very solid, despite the Type Cover’s extremely thin design, and the magnets that attach it to the Go are very strong. The touchpad is fine given its rather small size, but – like the keyboard – it's not something I want to use for hours on end. When I was using the Go 3 at my desk for extended work sessions, I preferred using a Bluetooth mouse.

The Type Cover weighs just over half a pound, so the tablet plus its keyboard cover is a good bit less than two pounds total. While the overall design hasn’t changed, the Surface Go 3 and its keyboard cover are still a very compact and well-designed set. There aren’t many devices that can provide the full Windows experience in such a portable package.

Unfortunately, as with the prior Surface Go models, you’re trading portability for performance. The Core i3 powering the $630 Go 3 that I’ve been testing is enough for basic tasks, but if you try and push things too much you’re going to be disappointed. My workflow is fairly modest: I mostly live in a browser (I used Edge for this review), and I also run apps including Trello, Slack, Todoist and Spotify. I also wrote this review in Word, to get the full Windows experience. Usually, the Surface Go 3 kept up with these tasks, but I had occasional music stutters and tabs often had to be reloaded if I navigated away from them for more than a minute or two.

Occasionally, things got worse. The Surface Go 3 mostly ran Adobe Lightroom fine, but moving through the interface definitely required patience as UI elements and photos took a while to load. And if I had it open along with any other programs, things slowed down significantly. Browser tabs were more likely to reload, and opening or switching between other apps took a lot longer. Lightroom performance itself was not terrible, though exporting an edited RAW file to a JPG took long enough that I did most of my photo editing and exporting for this review on my MacBook Pro. Exporting a single image probably took about 10 seconds, compared to a second or two on my Mac.

I’m sure you’ll be shocked to know that being on a video call also led to serious performance issues. When I was on a Google Meet call with some co-workers, switching that and Slack was painfully slow, and Slack had to refresh entirely as if I just opened it. While we’re at it, Slack performance was mediocre on this machine; jumping between different channels and conversations led to noticeable delays. (I’m willing to put some of the blame on Google and particularly Slack, because Slack's Windows app is not good. But not all of it.) That sums up the Surface Go 3 experience pretty well — I often just had to wait a lot for things to catch up.

Running our usual suite of Windows benchmarks confirmed my impressions – indeed, according to Geekbench 5 and PCMark10, the new Core i3 processor is nearly identical to the m3 that it replaces. This just highlights that Intel still doesn’t have a great solution for smaller devices. Apple’s $330 iPad, which I just reviewed, hit 1,336 (single-core) / 3,349 (multi-core) on Geekbench 5, compared to the 859/1,450 I got running it on the Surface Go 3.

The battery situation also leaves something to be desired. I got about five hours using the Surface Go 3 during normal use doing my normal work routine — not awful, but given how low-powered the processor is, I expected more. It also makes the Go’s portability less useful, because if you can’t be away from a charger for a full work day, what’s the point of having such a small device? The device did last quite a long time in a lower-power test. The Go 3 lasted almost 11 hours while playing back HD video, which matches up with Microsoft's estimates for 11 hours.

The Surface Go 3 isn't the fastest to charge, either. I had the device plugged in while running some benchmarks, and it took a whopping three hours to charge from 50 percent to 100 percent using the included charger. I was pushing the system pretty hard during that time, but even when I was doing less intense work, it took a good long while to charge. When the Go 3 was asleep, it still took about two hours to fully charge it up from 20 percent.

Benchmarks don’t tell the entire story, but they should give you a good idea of what to expect with the Surface Go 3. I could see the Go 3 making sense as a second computer, a companion to a more powerful Windows desktop for travel. If I was still commuting, I’d be happy to use the Go 3 on my hour-long train ride to go through email, do a little writing and manage all my to-dos. I could also see it being a good companion for running around at events like CES or E3. But I’d probably get tired of writing on that tiny screen.

But $630 plus another $100 minimum for the Type Cover is a lot of money for a device that feels rather slow and rather cramped. For that kind of money you could certainly get a more capable Windows laptop. Apple’s iPad is also a great option for a secondary computing device, and has the benefit of an OS that was built with tablets in mind; it’s also far more responsive than the Surface Go 3, and there are plenty of keyboard covers out there for getting real work done.

The value calculus does change if you’re a visual artist, I think. I have zero drawing ability, so the Surface Pen isn’t terribly useful for me. But it’s a very good stylus, and I could see artists who like to use Windows appreciating the Go 3 as a portable drawing tool that can also be a full-fledged computer when you need it. But once again, an iPad probably has better app support for artists who prefer a stylus.

Probably the biggest issue with the Surface Go 3 is that nothing has significantly changed since Microsoft released the Go 2 almost a year and a half ago. The design is still good, but performance and battery life are essentially unchanged, despite the new chip. I can’t recommend that anyone get a Surface Go 3 with the Pentium Gold processor; it feels like the low-end model exists only so Microsoft can say it sells a $400 tablet.

Just like its predecessors, the Surface Go 3 can be a pretty useful tiny Windows device, though you’re paying a premium for the portability. And the price for performance ration is seriously out of whack. If you’re a Windows fan, it'a decent option as a secondary device for casual work and for when you want something extremely portable. There aren’t a lot of comparable Windows devices out there, and the hardware’s design and built quality remains outstanding. Just make sure you buy the Type Cover, don’t expect much from tablet mode and be patient if you’re running a lot of apps.