Judging the Surface Go 2 comes down to your expectations. Can you live with slow performance to get a well-designed $400 tablet PC (not including a keyboard)? Or are you OK with spending hundreds extra to get a slightly more capable machine that's as cute as a button? If you answered yes to either question, this might be the mini PC for you. If you answered no, stay far away, for this path leads to frustration.

I liked the original Surface Go -- it was well built and more usable as a tablet than any other Surface -- but there were definitely issues. It was too slow to rely on regularly. And even though the $400 entry price seemed compelling, it started creeping up quickly once you added a $100 Type Cover and bumped up your RAM and storage. Once you go beyond $500, it's not hard to find last-gen ultraportables on sale that could be far more practical.

For the Surface Go 2, Microsoft increased the performance a bit with a Core m3 CPU option, dropped in a slightly larger 10.5-inch screen without making the device larger and added a dose of connectivity with optional LTE. But fundamentally, it's not that much different from its predecessor. 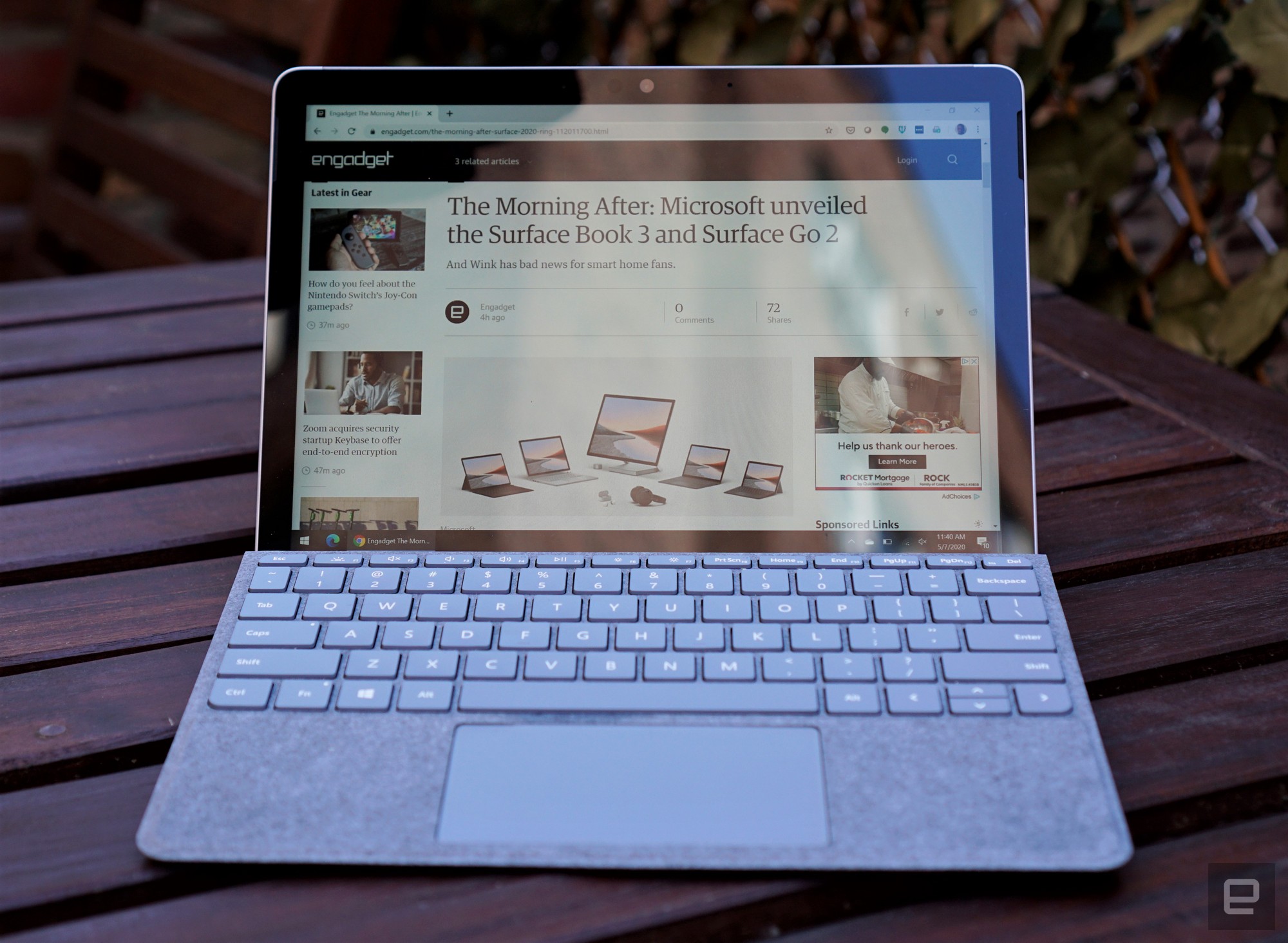 In fact, Microsoft didn't change anything about its design. It's still relatively slim and uses the same sturdy magnesium-alloy finish we're used to in the Surface line. The iconic kickstand is there too, and it can once again open up to 165 degrees (a great angle for drawing and handwriting with the $115 Surface Pen). Since its dimensions haven't budged, the Surface Go 2 also relies on the same $100 Type Cover from two years ago (or the $130 Alcantara-clad cover).

I can't imagine Microsoft would completely redesign the Surface Go after its debut, but it would have been nice to see more of a push forward. The larger screen is certainly nice to have, but the overall experience on the $400 base model hasn't changed at all over the past two years. It's still equipped with a lowly Pentium Gold CPU (though it's at least based on a newer chip architecture); it still has a meager 4GB of RAM; and there's only 64GB of sluggish eMMC storage. In comparison, Apple’s $329 iPad is equipped with a Fusion A10 processor, a remnant from the iPhone 7 that’s still pretty zippy today; 3GB of RAM; and 32GB of storage. It also has the advantage of being built for a mobile OS instead of Windows.

I get it: Trying to spec out a $400 tablet is tough. But Microsoft could have made the base Surface Go 2 a bit more compelling by bundling it with an accessory. Maybe throw in a Type Cover? Because nobody should buy this thing (or any Surface for that matter) without a keyboard. (If you've read any of my previous Surface reviews, you'll know this is a hill I'm prepared to die on.)

Our review model, conveniently enough, was the highest-end $730 Surface Go 2, which had a Core m3 CPU, 8GB of RAM and a 128GB SSD. It also had built-in LTE, but I wasn't able to test that out in time for this review. As soon as I started browsing the web, building up my usual pile of tabs, I could immediately feel the speed difference from the original Go. That's why I'm particularly annoyed the base model hasn't improved much -- I know how limiting a Pentium Gold CPU can be. 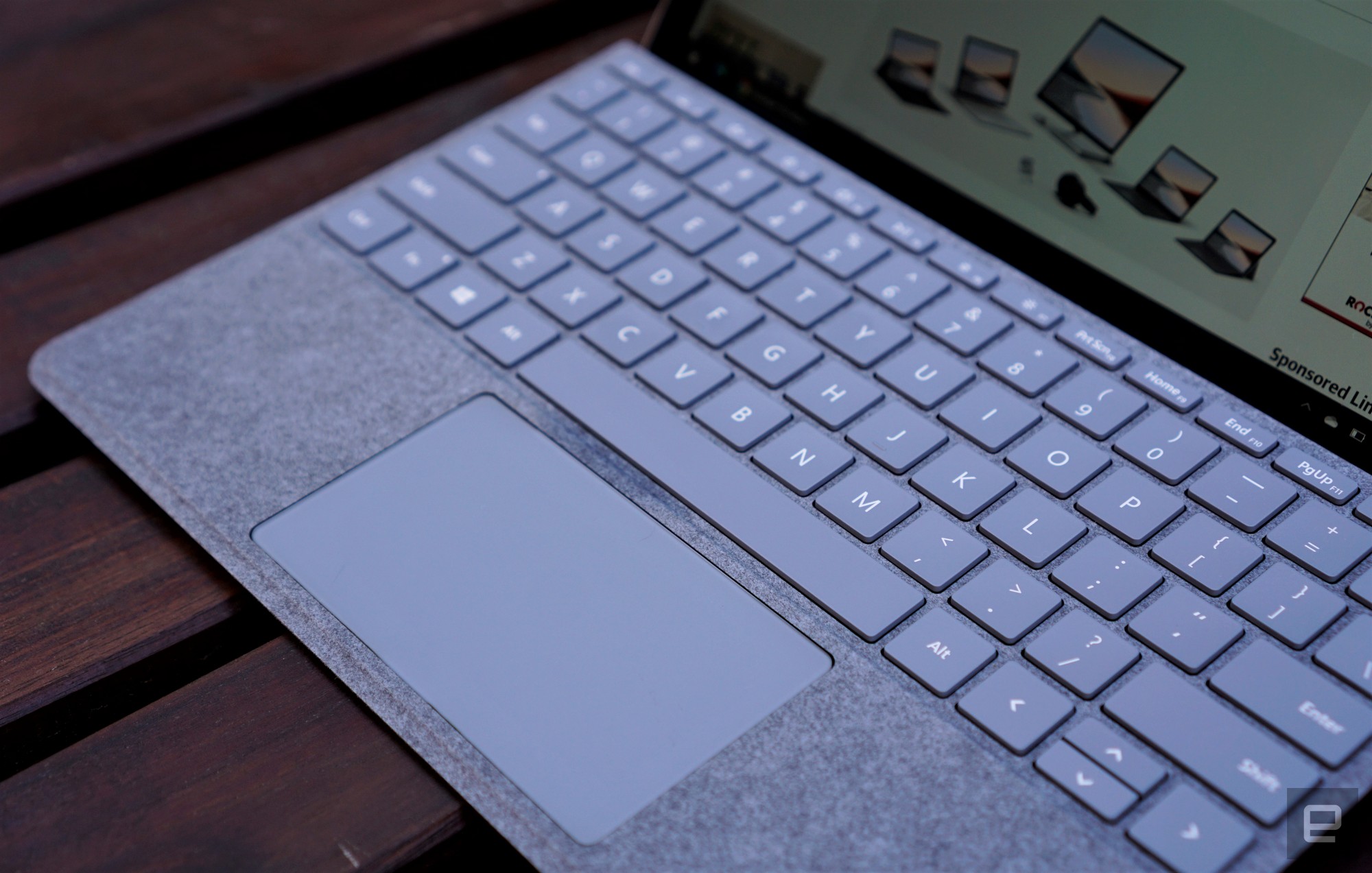 The Type Cover remains a fantastic little keyboard, even if it's a bit cramped. It'll take a bit of getting used to, but after working on the Go 2 for an hour, my fingers quickly adapted. There's a decent amount of key travel, like all the Surface covers, and it attaches to the tablet easily with magnets. The Surface kickstand hasn't changed a bit either: It's functional, but I would still love a solution to the way it digs into my legs when it's on my lap.

Despite the additional power, it didn't take long for me to feel the upper limits of our Surface Go 2. CPU usage never dipped below 50 percent with a few dozen browser tabs, Evernote, Spotify and Slack open. I reached 75 percent memory capacity even sooner, and it only crept higher the more I used it. Now, realistically, I would probably be a bit more cautious about opening up too many tabs on such a lightweight PC. But I wanted to see how the Surface Go 2 would handle my usual workflow. For the most part, I was impressed by how well the Core m3 CPU held up.

I can't imagine doing the same with the entry-level model. Since its specs are pretty much the same as the original Surface Go, I have a decent sense of what you'd experience with the base Go 2. Basically, be prepared to max out its CPU with simple web browsing and a few apps. You can forget about using it to manage any sort of media, since its 64GB of eMMC storage disk is incredibly slow and limited. Honestly, it's beyond basic. 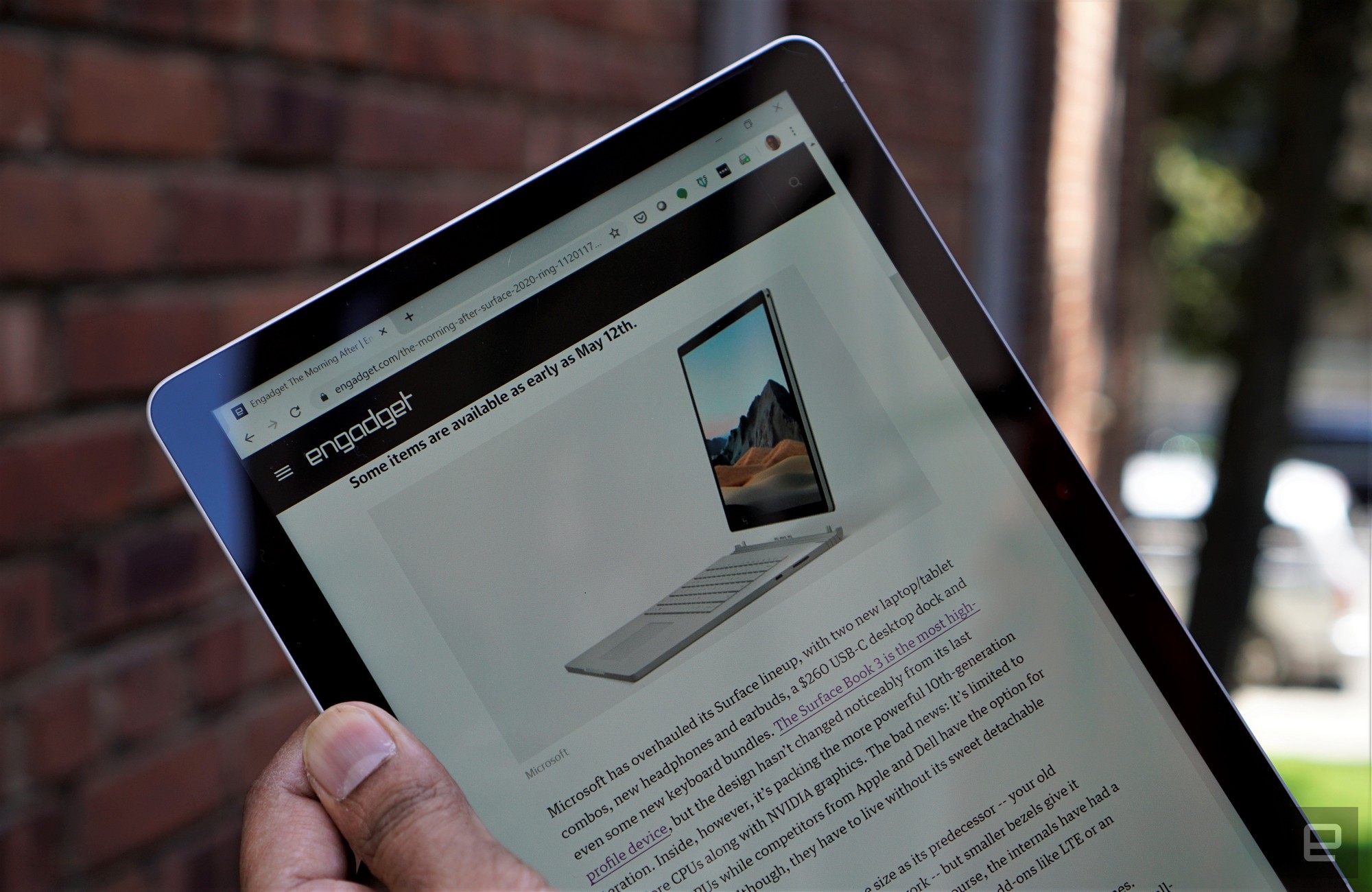 As a tablet, the Surface Go 2 felt as nimble as before. It's easy to hold and great for browsing the web or the occasional comic. But I'm astounded that Windows 10 is still a wasteland when it comes to high-quality tablet apps. It's 2020! Microsoft has had two years since the last Go and many years watching the iPad grow into a formidable threat to PCs. Where are the tablet apps? While you could use the Surface Go 2 as a slate, you'll definitely spend most of your time with it in PC mode (yet another reason why it should come with the damn keyboard).

No matter how you’re using the Surface Go 2, you can expect it to last a decent amount of time. The Surface Go 2 lasted for 9 hours and 55 minutes during our battery benchmark, which involves looping an HD video. While that's a respectable figure (and it’s comparable to the entry-level iPad), it's only five minutes longer than the last model lasted. I definitely expected more of an improvement, especially since Microsoft is touting longer battery life as a key selling point.

If you're considering the Surface Go 2, get the $630 model with the Core m3 processor, 8GB of RAM and 128GB SSD. That's a decent sweet spot of price and performance -- it’ll also be noticeably faster than any Pentium Gold model. If you have your heart set on LTE, be prepared to shell out $730.

As for competitors, there aren't many. Most PC makers gave up on detachable notebooks years ago, which leaves Microsoft practically in a category of its own. The strongest alternatives are Apple's $329 iPad and $499 iPad Air. The cheaper model will still offer better tablet apps than the priciest Surface Go 2. The iPad Air is a great option if you want more power but don't want to jump up to Apple's Pro tablets. Both iPads can also be equipped with keyboard cases like Logitech's Combo Touch, so you can still be pretty productive.

I wanted to love the Surface Go 2. And with the right configuration, it can be a pretty useful tiny PC. But it's not the wondrous $400 tablet Microsoft claims. It's a shame the company didn't do much to improve that entry-level experience over the past few years other than expanding the screen by half an inch. It's called the Go, after all. Microsoft should be doing more to push forward.