HP has been treating its premium Spectre line like fine jewelry for several years now, with an emphasis on flashy designs and thinness. They've looked good, especially for HP laptops. But now with the latest Spectre x360 13-inch, the company finally has an ultraportable that would look right at home alongside gold and diamond wear at the mall. In a word, it's stunning -- HP finally modernized the x360 with vastly thinner screen bezels and a smaller footprint. It's a high point for the company, and together with Dell's XPS 13 2-in-1, the new x360 is a sign that PC-makers are truly beginning to perfect their convertibles.

I suppose I shouldn't be too surprised about how much progress HP has made with the Spectre though. Last year's leather-bound Folio was also a major design triumph that truly stood apart from every other laptop on the market. The new Spectre x360 isn't a dramatic reinvention like the Folio, but it builds on everything HP has been doing with the convertible since 2015.

The first thing you'll notice about the Spectre x360 is that's practically all screen. This revamped model features a 90 percent display-to-body ratio, compared to 78 percent last year. HP took a cleaver to the chunky bezels at the top and bottom of the 13.3-inch display. And it looks like the company took a scalpel to the side bezels, which are ever-so-slightly thinner. The result is a screen that dominates the laptop -- it practically looks like it's hovering in the air.

The rest of the x360's design compliments that massive screen: Its metal case is honed to perfection, and its diamond-cut, angular edges help it stand apart from a sea of utilitarian laptops. Most of that look is carried over from last year's model, but it still holds up today. The only glaring aesthetic issues are the prominent hinges, which allow you to fold the x360 into a tent formation, or a large tablet. I get why it's necessary, but Dell's latest convertible showed that it's possible to hide those hinges a bit more, while still being flexible. It's a small nitpick, but it's something that distracts a bit from the Spectre's glorious screen. 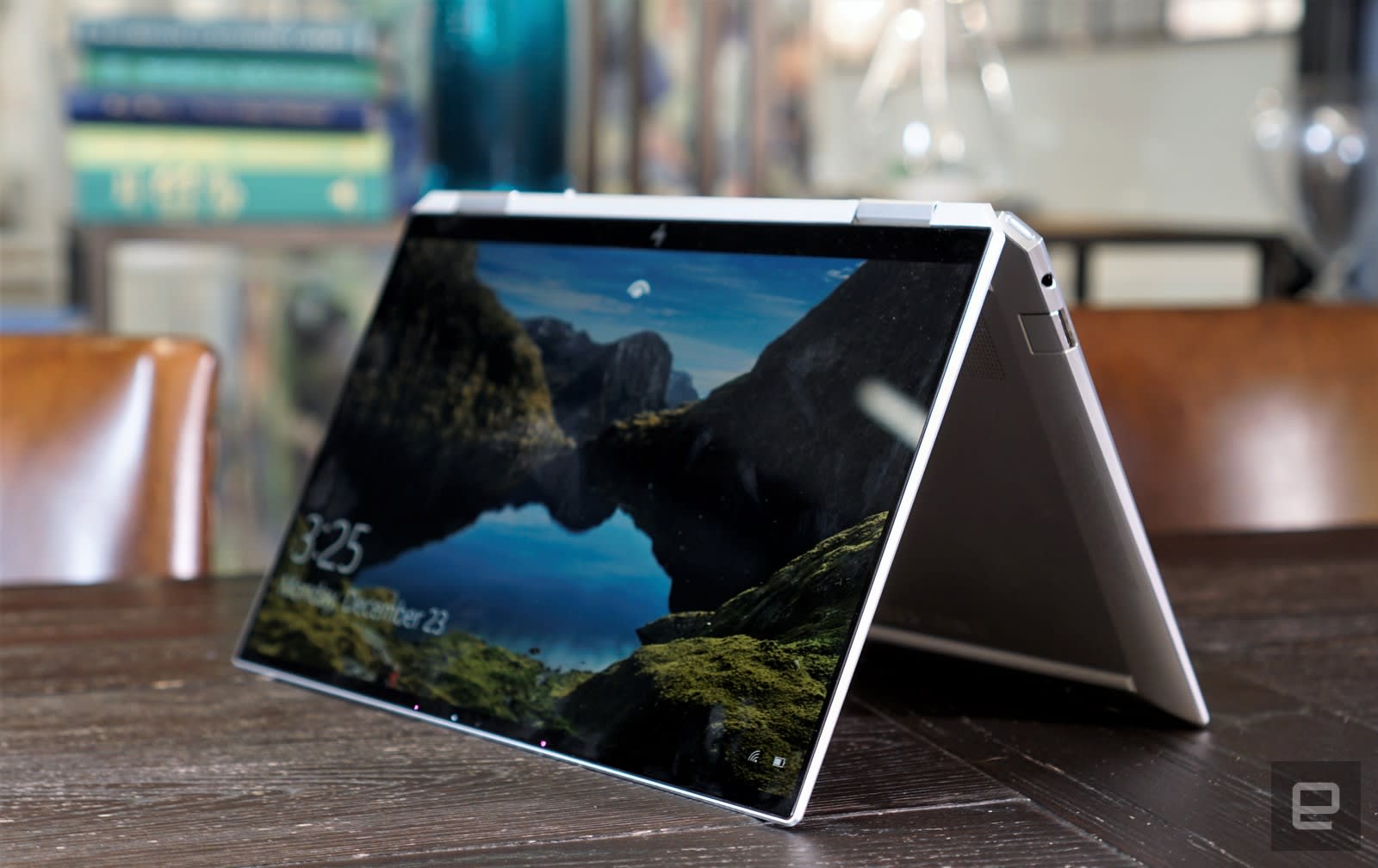 This year, you can equip the x360 with either 1080p or 4K AMOLED touchscreens. I'm more intrigued by the AMOLED aspect of that premium upgrade -- you can't really beat that contrast -- but it'll also eat into your battery life. Our review unit was equipped with the 1080p screen, which was bold and bright enough for editing photos and streaming HDR video. I could tell it wasn't as bright as the XPS 13 2-in-1 though, which also features Dolby Vision HDR and a slightly taller 16:10 aspect ratio.

HP managed to shrink down the Spectre x360 by 13 percent from last year. It now weighs 2.8 pounds, which is less than the MacBook Air and many other ultraportables. It's very compact, but unlike LG's Gram series, it also feels like a solid and well-built machine.

The Spectre x360 also features a surprising amount of functionality for something so thin. There are two USB-C ports for charging and data, a drop-down USB-A connection for older devices and even a microSD card slot. That means there's less of a reason to keep a dongle around with the x360, though you'll still need one for things like Ethernet and HDMI. Like last year, HP placed the power button and one USB-C port along the rear corner notches of the x360, which also helps it stand apart. It would have been nice to have one of the USB-C ports on the left of the machine though, so you could charge it from either side. 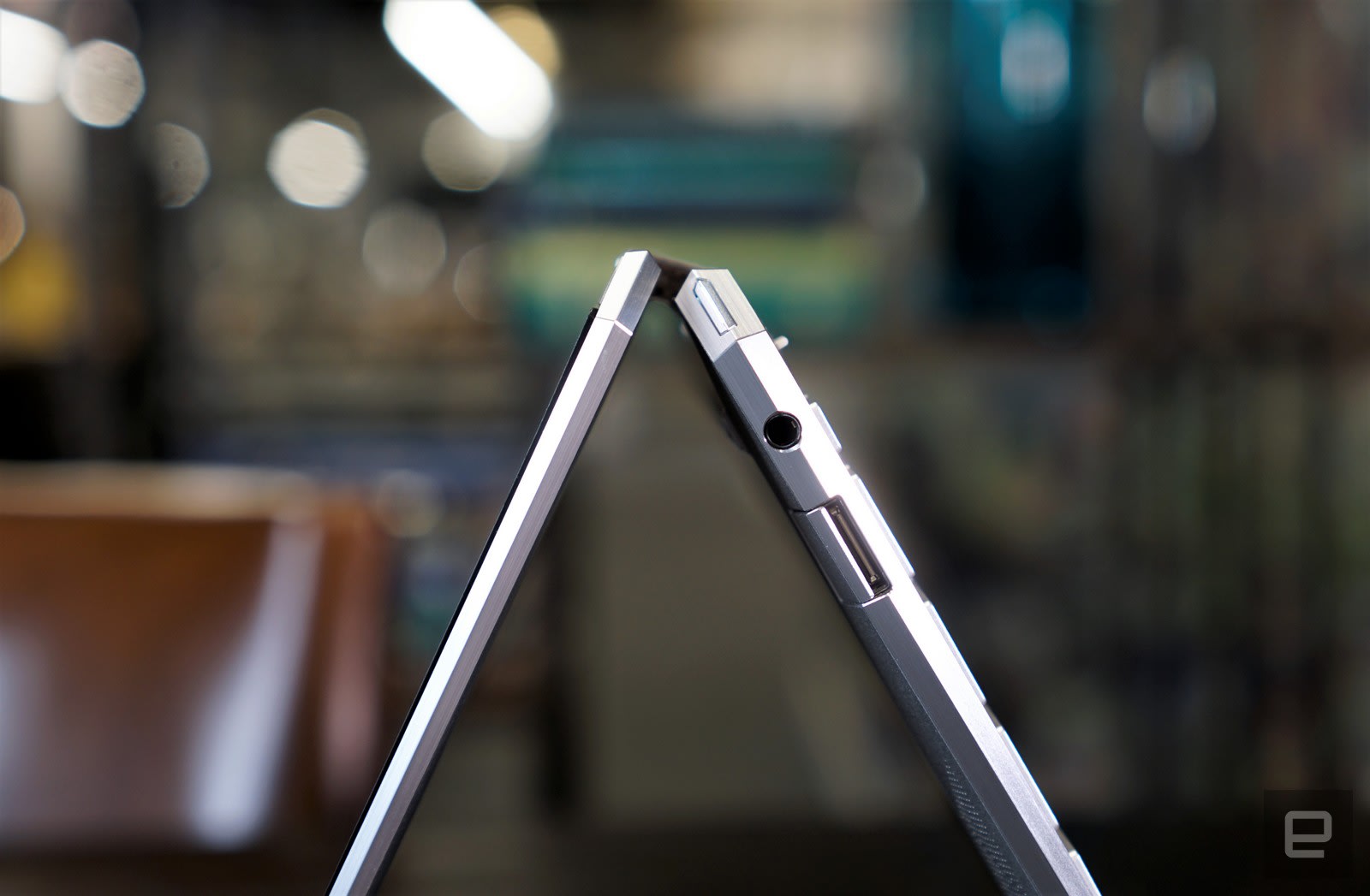 HP managed to fit in an IR camera for Windows Hello face authentication. That's something we missed on the XPS 13 2-in-1, which only featured a fingerprint sensor. The Spectre's super small camera is terribly grainy and blurry, unfortunately, but that's the price you pay for squeezing it into a tiny screen bezel. The x360 also has a fingerprint sensor, if you don't quite trust Windows face-mapping biometrics yet.

Thanks to its smaller frame, the x360 now features a wide edge-to-edge keyboard. Its large keycaps are luxurious, and I really appreciated the deep key travel, which feels reminiscent of Microsoft's Surface. This is one area where, for many people, HP has an advantage over Dell. While I got used to the XPS 13 2-in-1's fairly flat Mag-Lev keyboard, I've talked to plenty of folks who found it only slightly better than Apple's uncomfortable butterfly keys. The Spectre x360's delivers the sort of typing experience PC enthusiasts crave. It's not as good as the legendary ThinkPad keyboard, but it's close. 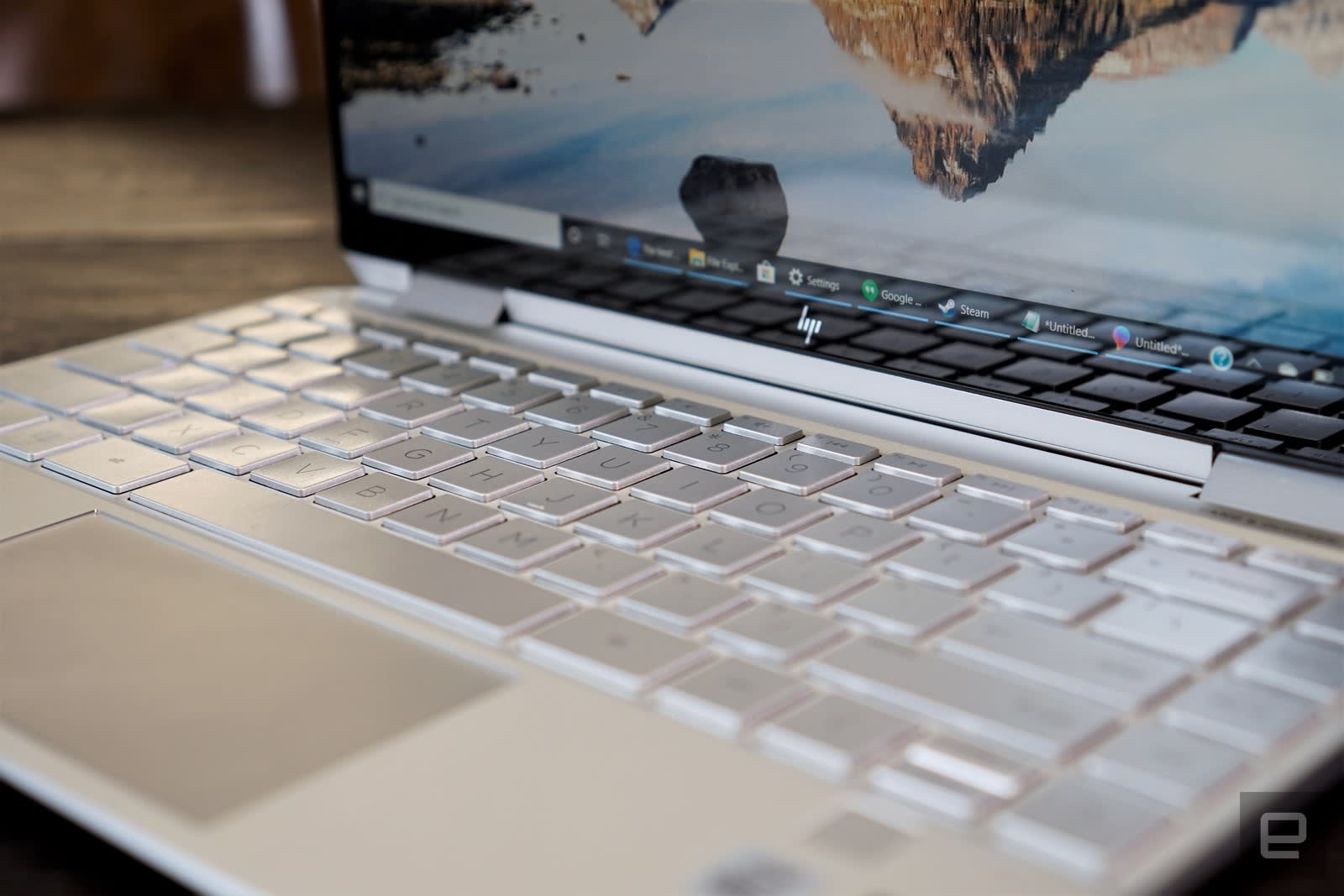 Its trackpad also feels very smooth and accurate, though I wish it was larger like Apple and Dell's latest premium devices. Thankfully, HP dumped the terrible Synaptics touchpad drivers from its last batch of machines and added a Precision driver this time around. That gives the touchpad a much more modern feel with support for more gestures. Frankly, it's something the company needed to do for years.

HP also includes a stylus with the x360, and while it's no Surface Pen, it's useful for anyone who wants to doodle a bit. There's also a sleek leather in the box to protect it from the elements. I find it a bit unnecessary, but it fits with the premium aesthetic the company is going for. At the very least, it'll prevent the x360 from getting the nicks and scratches that can quickly make a new laptop seem weathered.

As far as performance goes, the Spectre x360 delivers most of what we've seen from other laptops with Intel's 10th gen CPUs. It's plenty fast for daily tasks, even when I'm juggling dozens of tabs, Slack and other apps. And Intel's Iris Plus graphics give it enough power to play a few games, like Overwatch, although I had to lower the resolution to 720p to get anywhere near 60FPS. That might not sound impressive, but it's a huge step forward from the weak integrated graphics Intel used to rely on. It's enough power for the x360 to play simpler and slower paced games well too, like Minecraft and Disco Elysium.

Aside from the aforementioned hinges, there's not much about the x360 that screams "convertible" at first. It works well in the standard laptop mode -- where you'll be spending most of your time -- but the ability to twist the screen around is useful if you just want to watch Netflix in bed all day. And as with more convertible machines, it's comically large to use as a tablet, but I still found that mode useful for focused reading. If you don't have a standard tablet around, the x360 is also a great screen for devouring digital comics. 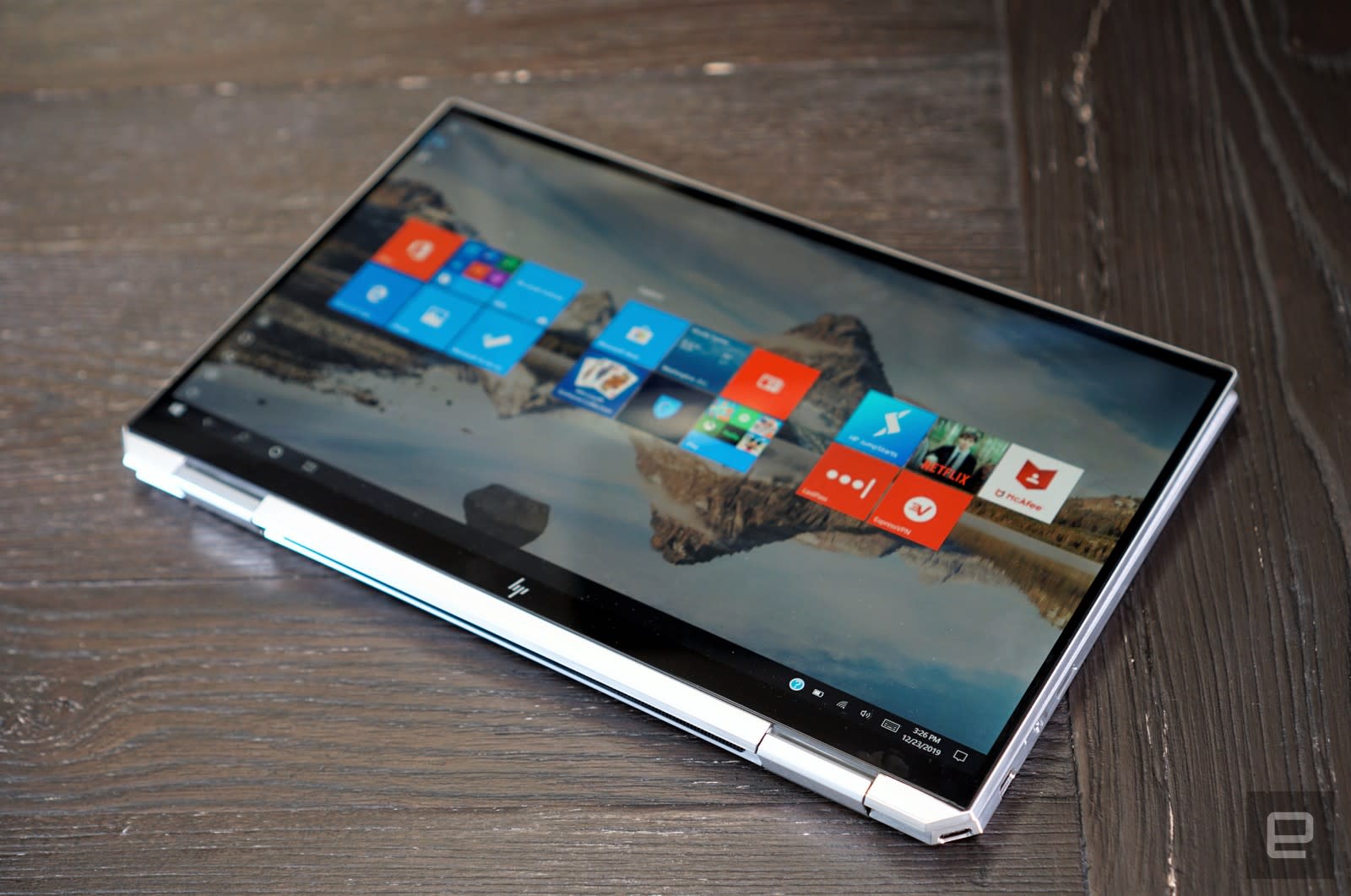 The laptop did get a bit warm to the touch when I was playing games or doing anything demanding, and its fans are noticeable once they kick up. HP says it reworked its cooling design from last year, so it should at least be quieter than the last x360, which sometimes sounded a bit like an overeager jet engine. When you're not gaming, you can also expect to see some solid battery life. During our benchmark, which involves looping an HD video, it lasted for a healthy 14.5 hours, almost exactly the same as the XPS 13 convertible.

There's one issue that mars the otherwise premium Spectre x360 experience: bloatware. HP crammed in apps from Dropbox and ExpressVPN, along with its own redundant apps for things like switching audio devices. It caused me to have a flashback to the dark days of Windows XP laptops, and it's not the sort of thing you'd expect from a pricey 2019 machine. McAfee Personal Security is also pre-installed, but at least that comes with a trial subscription (and it's actually helpful for most users). 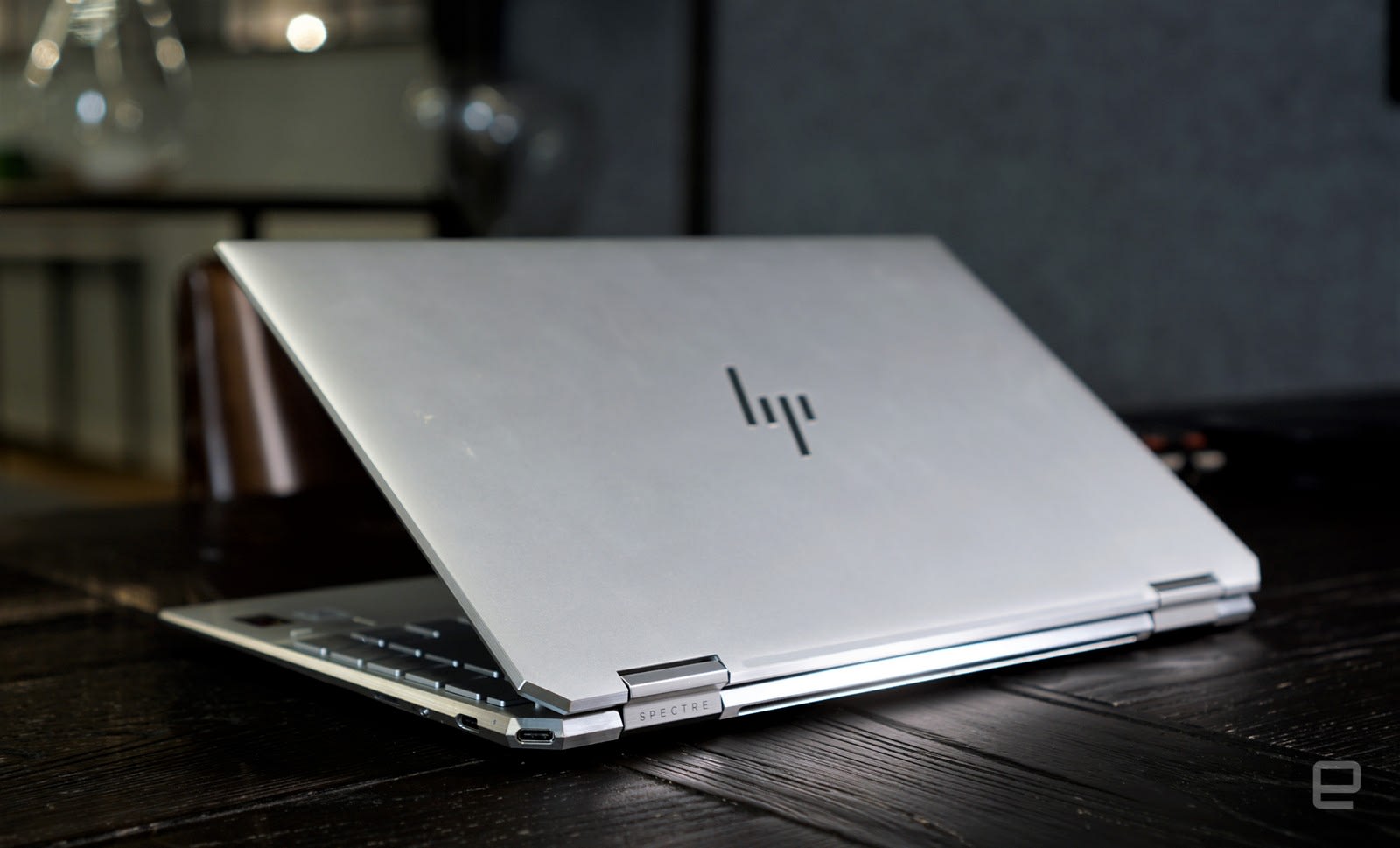 The revamped Spectre x360 feels like the realization of a dream for HP. It's one of the most stylish ultraportables we've ever seen, without sacrificing power or usability. It's a stellar example of just how far HP, and the PC industry as a whole, has come from last year.