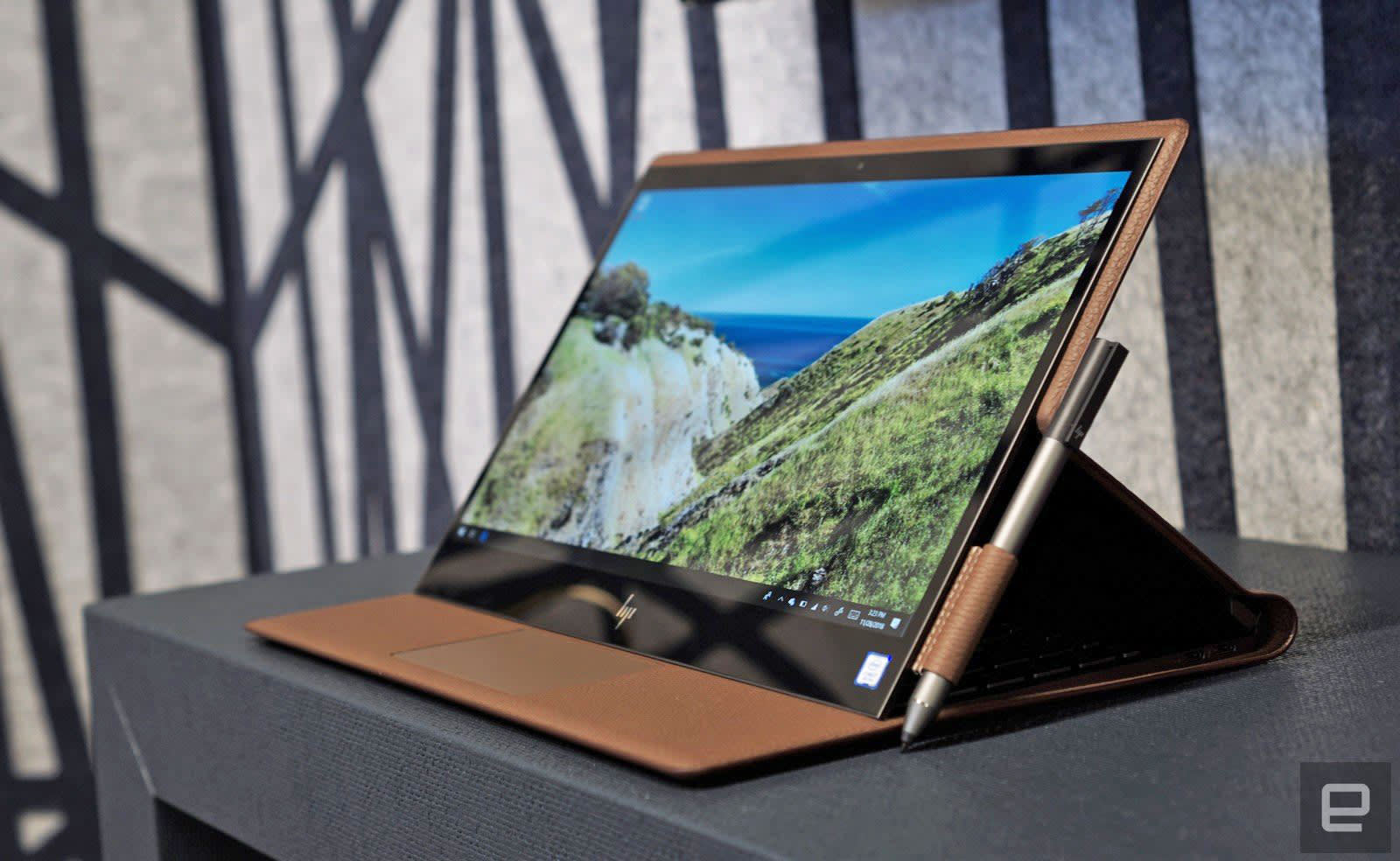 Who needs a leather computer? When HP announced the Spectre Folio, the first notebook with a completely leather case, it seemed like a vain attempt at doing something different. But after spending a week with it, the Folio turned out to be much more than a gimmick. With its leather covering and a unique convertible hinge, the Spectre Folio is a step towards a wild new world of computer designs, one where everyone stops trying to recreate the premium unibody style that Apple pioneered. 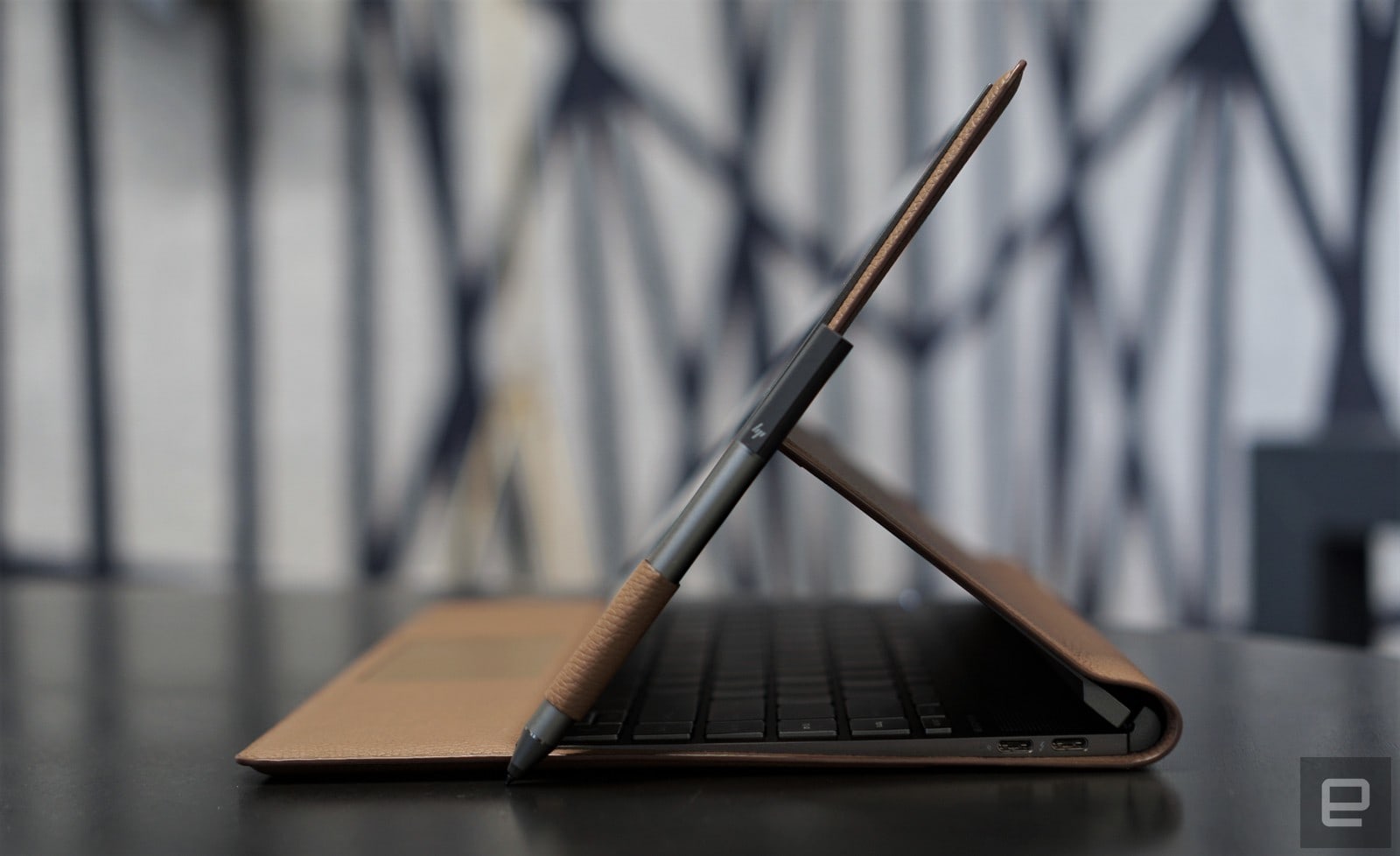 It's easy to mistake the Spectre Folio for one of those portfolios lawyers and other professionals rely on — and that's exactly the point. Its leather case, which is available in light brown, ash and burgundy, doesn't look anything like a typical PC. While we've seen leather accents on notebooks in the past, HP went all out with the Folio: It covers the entire outside, but it also elegantly borders the display, keyboard and trackpad.

I also appreciate the finer touches, like the accented stitching on the back and the hand painted edging around the entire machine. The Spectre Folio feels less like a mass market consumer device, and more like something that was painstakingly crafted by a leather obsessed Etsy seller. 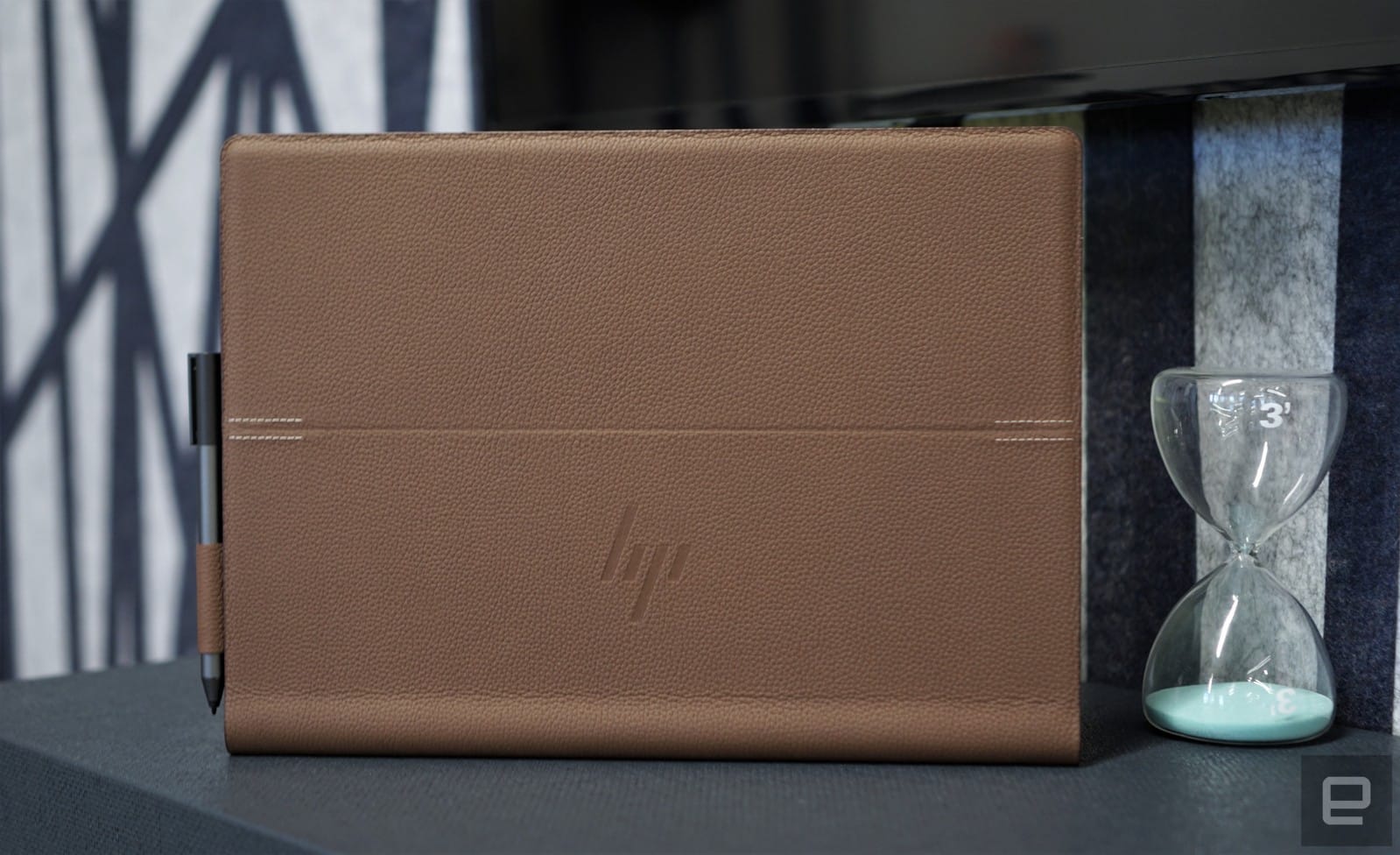 And don't forget, the Spectre Folio is a convertible device: Press down along the top of the display and the entire screen pops out, allowing you to pull it forward right above the touchpad and use it as a comfortably angled tablet. Pull the display forward a bit more and the Folio takes on the angled easel positioning of Microsoft's Surface lineup. And yes, you can also fold the display completely flat if you want.

The Folio moves through all of these positions with surprising ease, thanks to the unique hinge system HP designed. A sturdy circular spine connects the two halves of the machine, while the rotating display has a simple hinge supporting it. It's like HP took the innovative kickstand from the Surface Pro and merged it with the more traditional design of the Surface Laptop. The result is a device that's convertible when you need it, but otherwise feels as stable as a normal notebook. 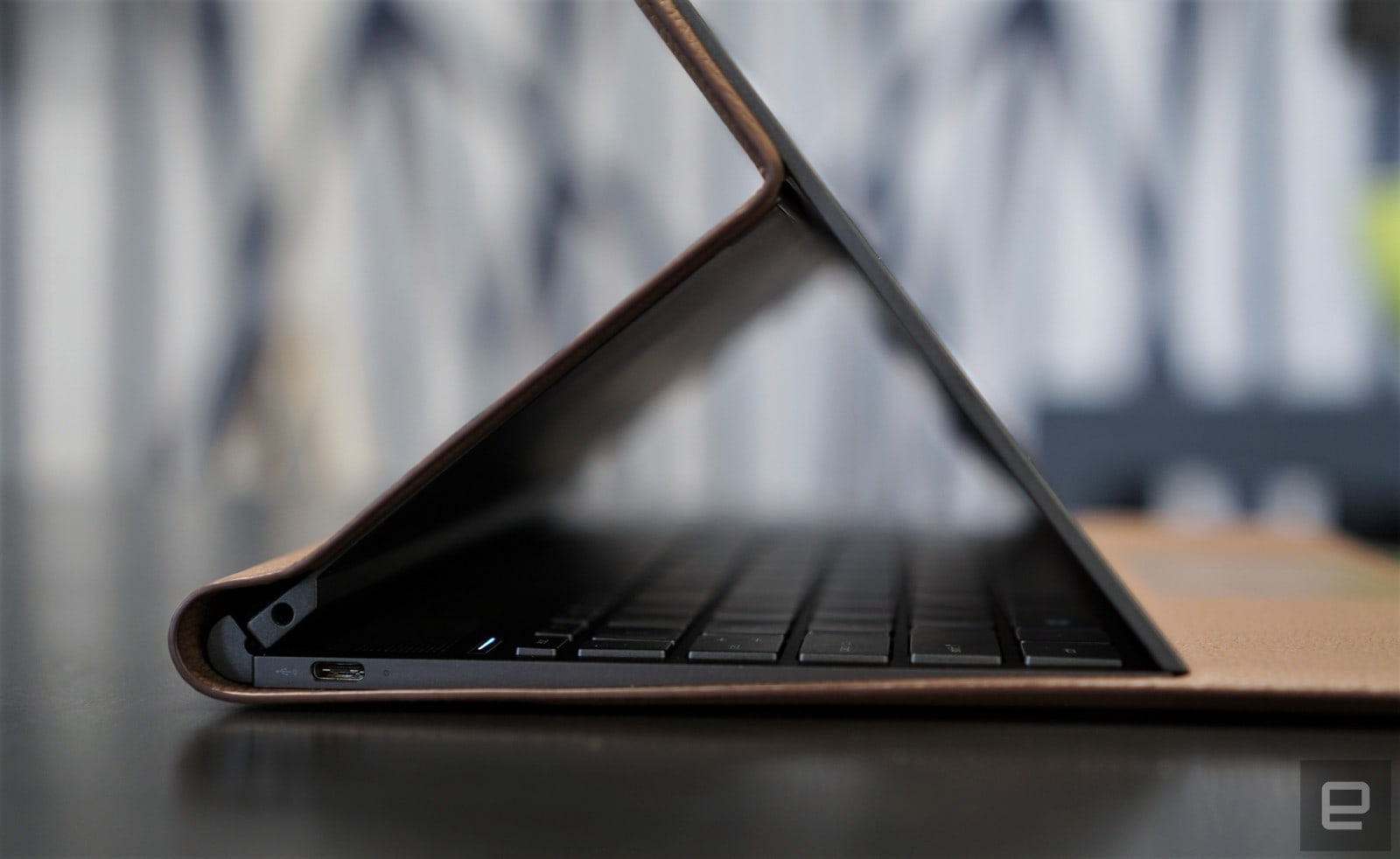 That makes plenty of sense for a machine running Windows 10: It's an OS that has some decent touchscreen capabilities, but it's far more useful with a keyboard and mouse or touchpad. That's always been a sticking point with Microsoft's Surface devices for me. Sure they're great as laptop replacements with their keyboards, but I'd never recommend them as standalone tablets.

As for accessories, HP also bundles the stylus in the box, which costs extra on the Surface machines. While it's pretty useful, it doesn't feel as comfortable or accurate as the Surface Pen. I just wish HP had integrated a better way to attach the stylus to the Folio -- what you get is a leather sleeve the sticks onto the back of the display, and it simply feels cheap for such a premium device. 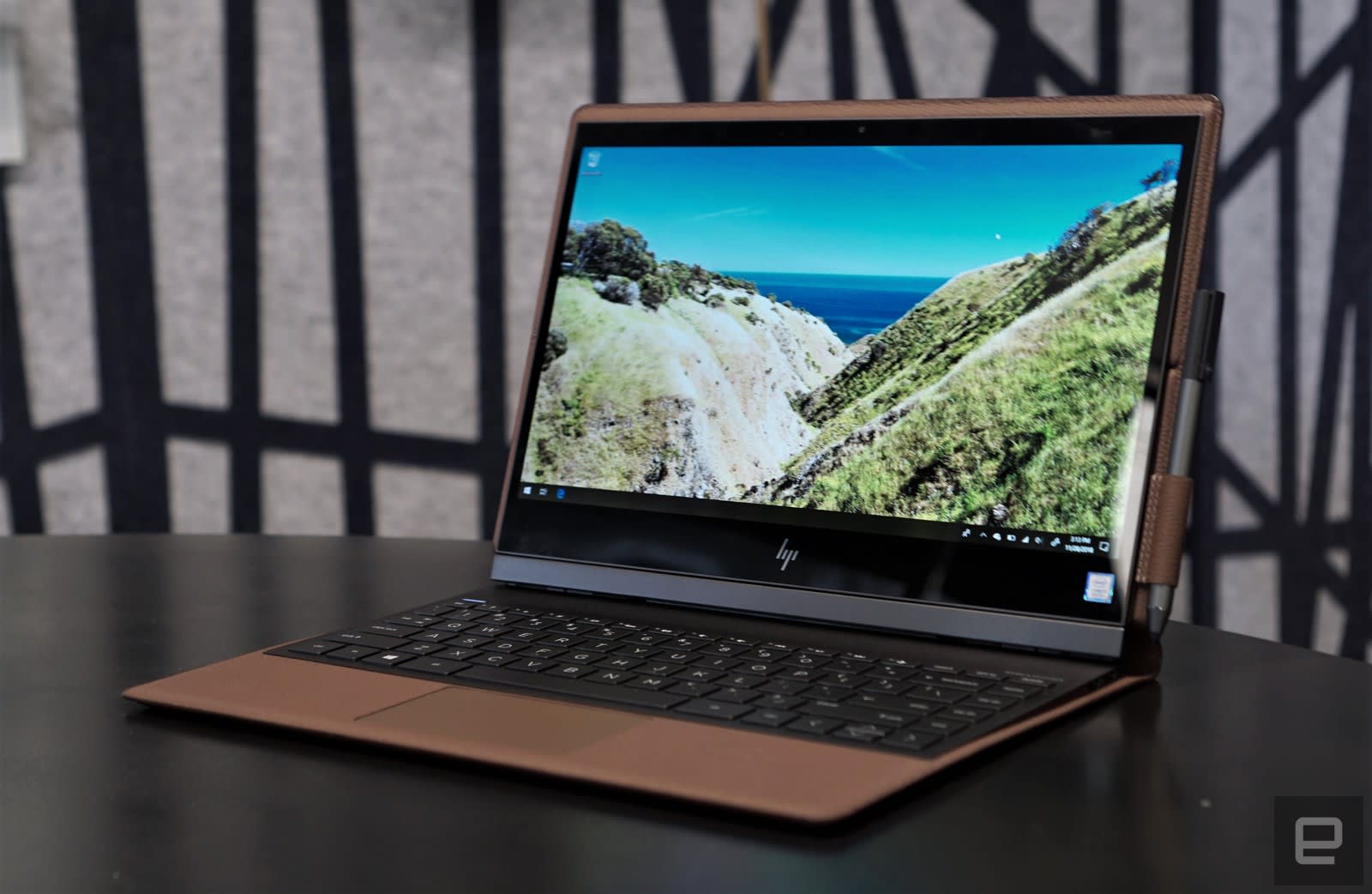 So sure, it looks good, but what's really impressive is that HP's leather gamble actually works out. As a laptop, the Folio feels just as luxurious as HP's previous Spectre machines. It's not as mind bogglingly slim as the Spectre 13, but at 15.2 millimeters thick it's still very portable.

At first, I was worried that using a leather-clad PC would feel like a weird organic machine from a Cronenberg movie, but I got used to the unique texture quickly. I even grew to appreciate the natural warmth of the leather case as the temperature started to drop -- there's no initial shock of cold on your legs or wrists like an aluminum case.

Of course, none of that would matter if the Folio collapsed under the weight of a few browser tabs. Thankfully it managed to keep up with my usual workflow, despite running a slow dual-core Y-series Intel processor. Obviously, this isn't really a machine meant for encoding gobs of video or playing games. But it handled running dozens of browser tabs, photo editing, Skype, Slack and Spotify without issue. Thanks to that low power CPU, HP was able to make the Folio completely fanless, so it's ideal for environments where you don't want any distracting noise. 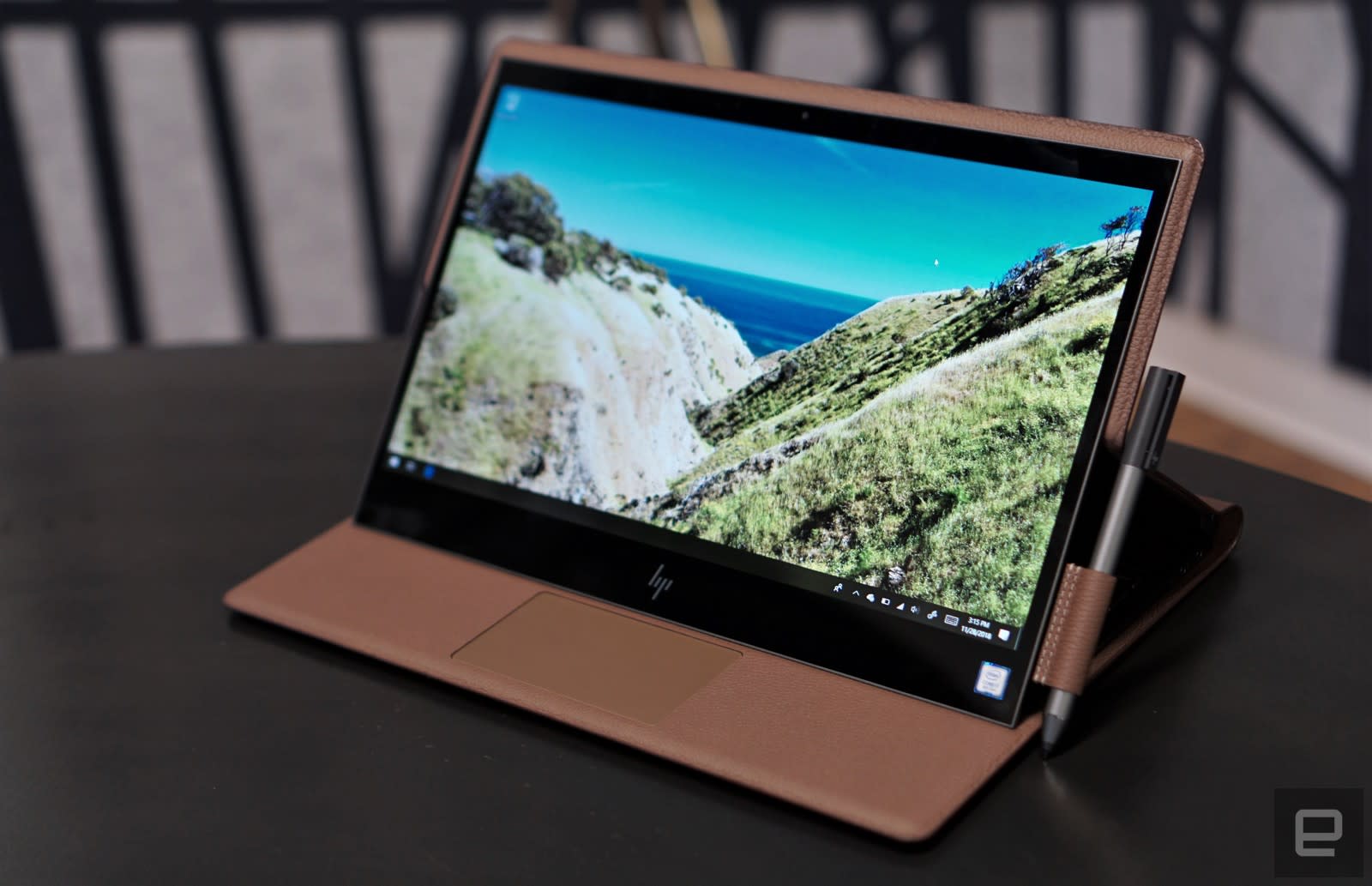 That's particularly welcome when you're watching movies on the 13.3-inch screen, which is bright and vibrant. Sadly, though, most models are stuck with a 1080p resolution. (HP says a 4K version is coming soon.) It's a solid display for doing work and watching movies, and I was happy to find that it still looked great outside in direct sunlight. Still, it would have been nice to see official HDR support, like we're seeing in other modern notebooks.

The Folio is also one of the first notebooks with built-in gigabit LTE, and it almost spoiled me. It connects to AT&T's network within a few seconds when you open the lid, and it does a solid job of reconnecting in noisy environments, like hopping between stations on the subway. In my apartment, I saw download speeds around 18Mbps and upload speeds of 7Mbps. That's not great compared to most broadband connections, but I appreciated the ability to just open up the Folio anywhere and get online. Personally, I'd still rather just tether it to my phone and save the extra monthly fee, but I'd definitely consider paying for cellular PC access if I was always on the road. 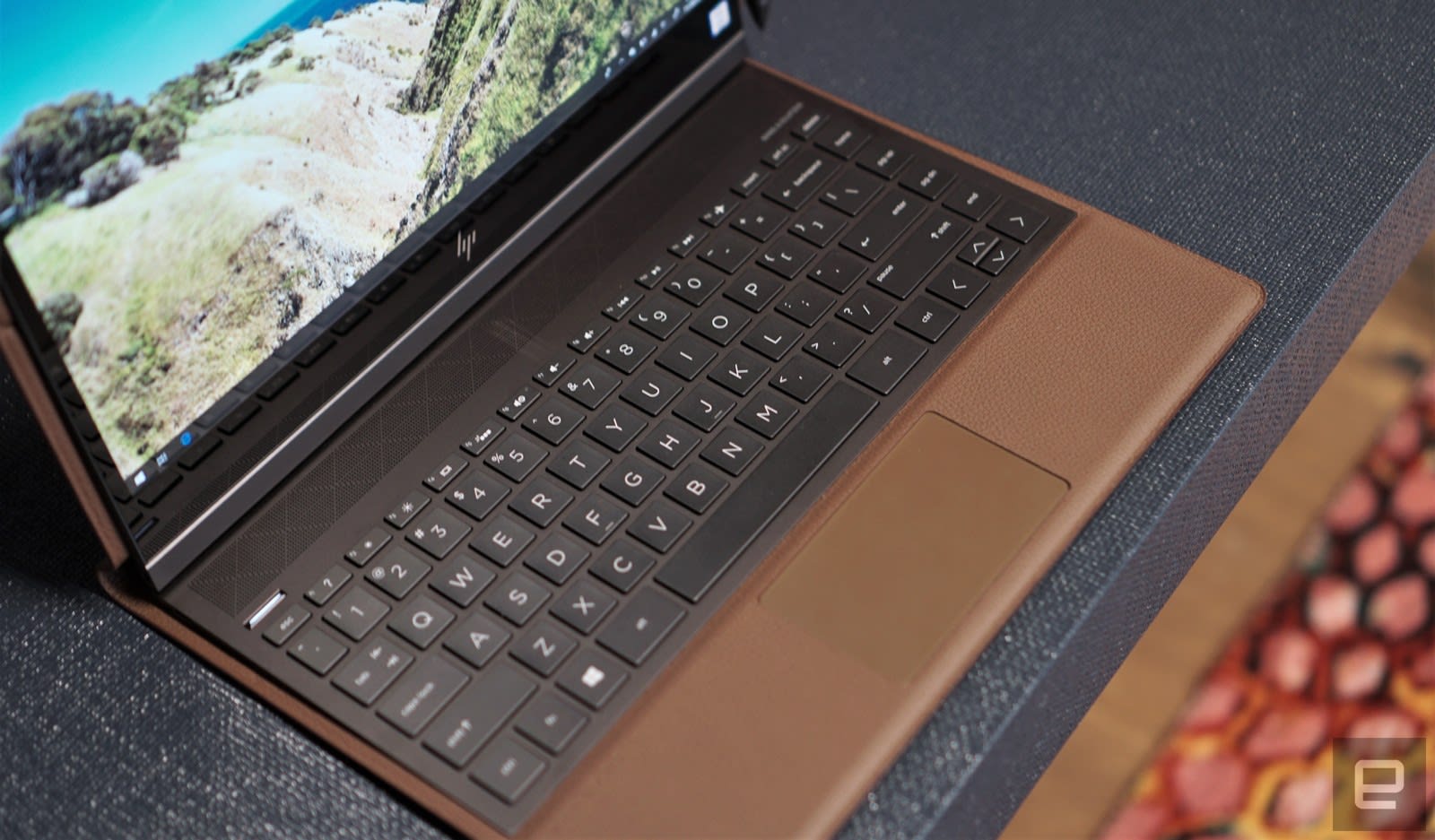 HP didn't skimp on input devices either: My fingers flew across the well spaced keyboard, and there was a satisfying amount of feedback as I typed. Its trackpad isn't as large as what we're seeing from Apple and other PC makers these days, but it's smooth and responsive. The Folio also feels rock solid when it's on your lap -- no different than a regular laptop. That puts it a step above machines like the Surface Pro, which you have to balance carefully.

The Folio also manages to outdo the competition as a convertible PC: The screen magnetically attaches right above the trackpad when you pull it down. That's a strange orientation, but it's useful on Windows since you can quickly use the touchpad when it's hard to interact with something on the touchscreen. It's also much easier to use than the tent modes you see on other 2 in 1 machines. Like most 13-inch machines, the Spectre Folio is comically large as a tablet, but it's still somewhat useful for drawing, jotting down handwritten notes, or reading long documents. 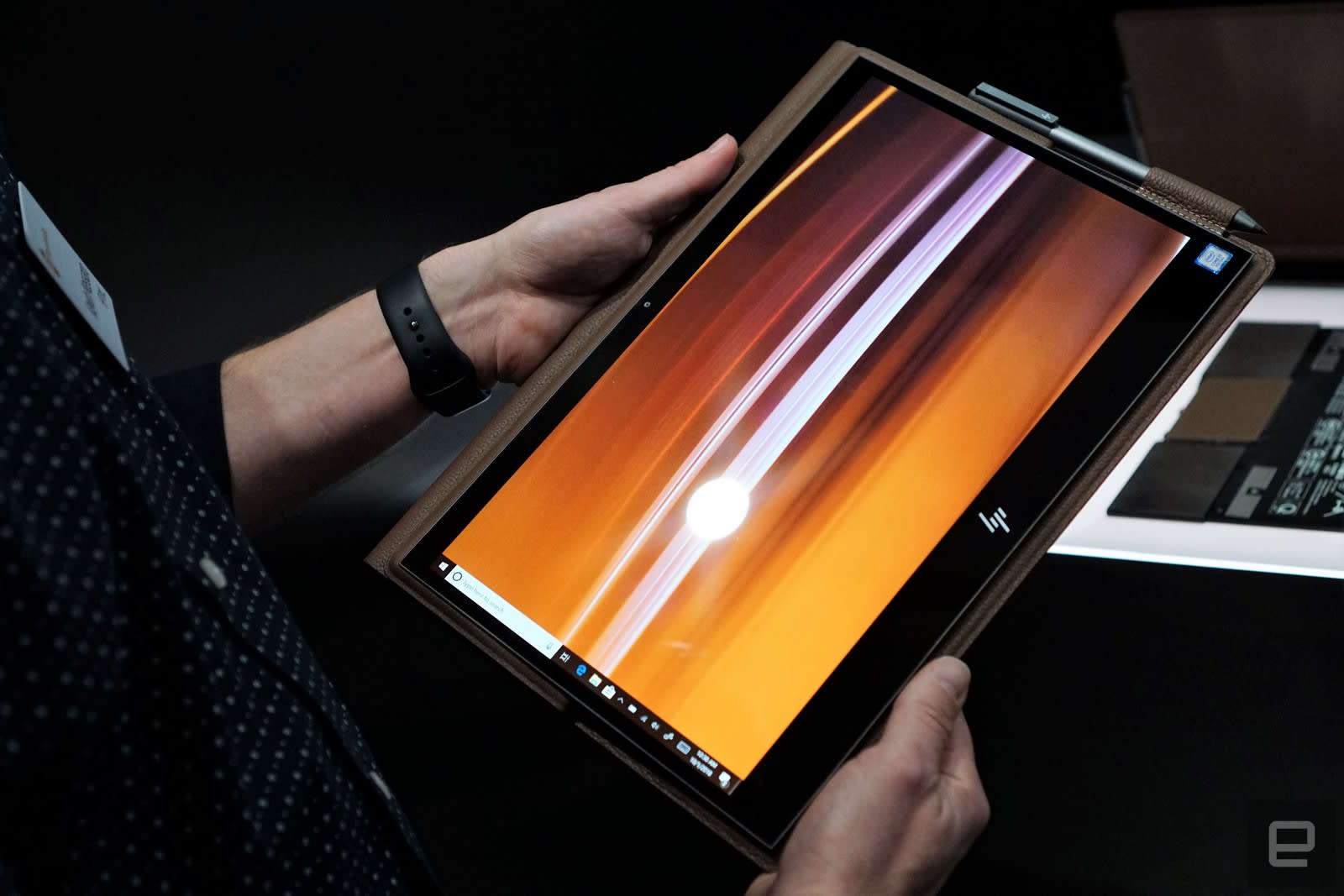 As impressed as I was overall, I was still disappointed by some aspects of the Folio. The Bang & Olufsen speakers sound surprisingly cheap and tinny -- especially considering it's something HP is touting as a notable feature. I also noticed that if I opened up the Folio while putting pressure on the top of the display, it would sometimes pop out and graze along the keyboard with a sickening crunch. I didn't damage the screen, but it's easy to see how that could end disastrously with a bit more force.

I also wish HP offered more than just three USB-C ports, but at least you can charge the computer from all of them. The two ports on the right side of the machine are Thunderbolt 3 capable, while the other is a typical USB 3.1 connection. At least the battery life was impressive, clocking in at 14:41 in our tests. During my daily workflow, it typically lasted between 6 to 8 hours, but I noticed that using LTE drained it a bit faster.

As with anything leather, HP says you can expect to see a well worn patina form on the Folio as you use it. That's another advantage over metal laptops: Leather simply looks better as it gets older. Cleaning the case is no different than a regular PC, just rub it with a damp cloth and a bit of soapy water whenever it gets dirty. There's always the risk of the case being stained though, as well as it becoming a chew toy for dogs or a scratching post for cats. 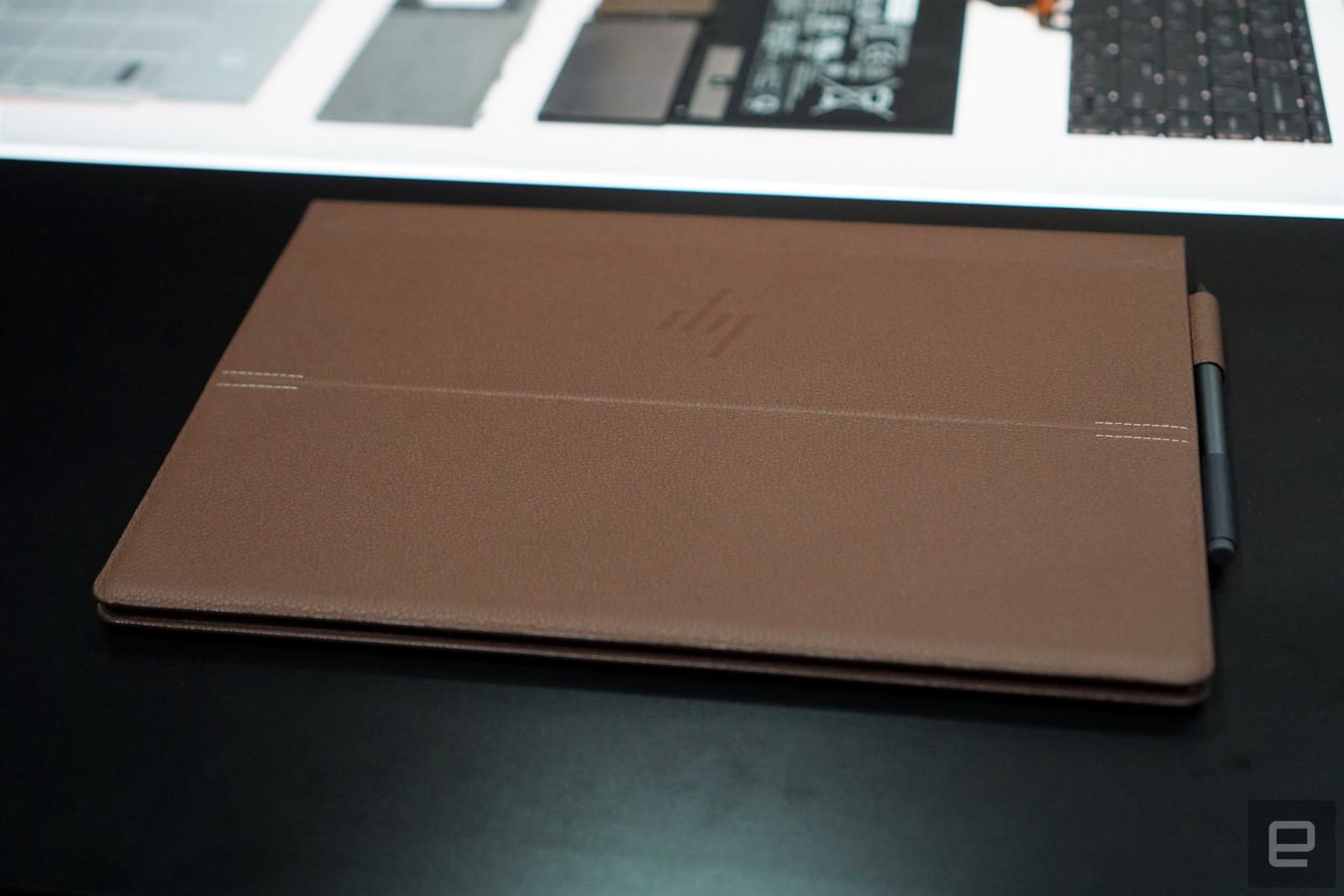 Not surprisingly, you'll have to pay a slight premium to own a leather laptop: The Folio starts at $1,399 with 8GB of RAM, but you'll have to pay $100 more if you want LTE. The model we reviewed with 16GB of RAM goes for around $1,600. I'd recommend shelling out for a Folio with LTE, even if you're not going to use that immediately. As more notebooks add cellular connectivity, there's a good chance carriers will start to make their mobile data offerings cheaper and more compelling.

HP isn't lacking in competition in the convertible PC arena -- there's Dell's XPS 2 in 1, which starts at $1,000, as well as Lenovo's huge Yoga lineup. Even HP's other premium convertible, the Spectre x360, is another strong option. But the Spectre Folio stands out thanks to its classy leather case and screen flexibility. It's sturdier than the Surface Pro, it can do a lot more than the iPad Pro, and you don't have to worry about awkwardly folding a screen all the way around a keyboard just to watch Netflix. 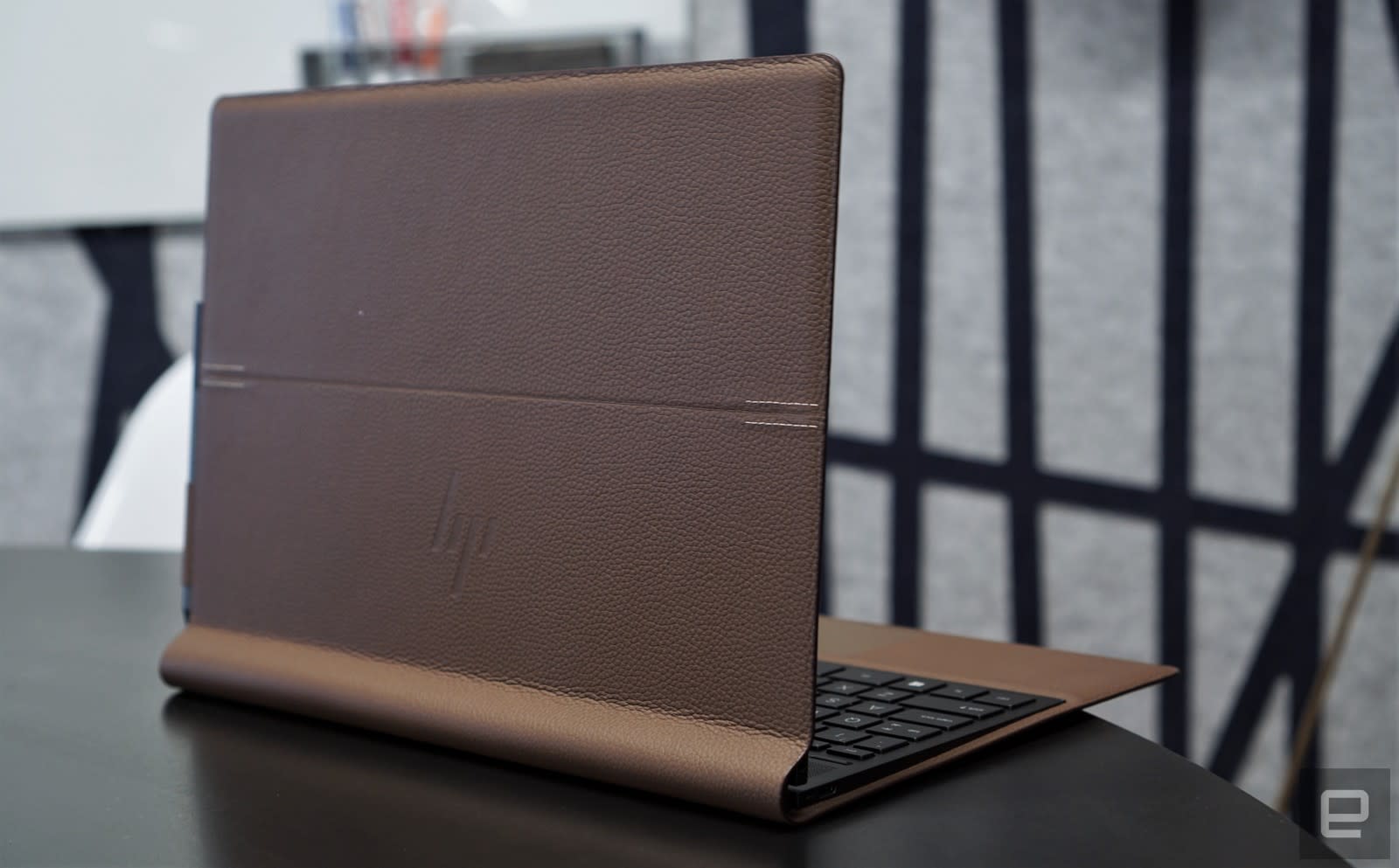 The idea of a leather computer is crazy, and it's even crazier to think that HP is the company that risked building it. But it turns out the company is onto something. Even if you're not interested in buying the Folio though, it proves to the PC world that there's value in exploring new materials and designs. So who needs a leather computer? In a sense, the entire computing industry does.

All products recommended by Engadget are selected by our editorial team, independent of our parent company. Some of our stories include affiliate links. If you buy something through one of these links, we may earn an affiliate commission. All prices are correct at the time of publishing.
View All Comments
HP Spectre Folio review: This leather PC means business