HP made a laptop out of leather

The Spectre Folio is unlike any notebook we've seen before.

What's more luxurious than a MacBook-esque metal laptop case? How about one that's made out of leather. That's what HP is betting on with the Spectre Folio, its latest slim convertible. I'm not just talking about a simple leather sleeve, or a bit of cow-hide pasted atop a traditional laptop case. The Spectre Folio is something entirely new. Like the ultra-thin, jewelry-inspired Spectre 13.3 before it, the Folio is HP's latest attempt at pushing notebook designs forward.

True to its name, the Spectre Folio genuinely looks like a pricey leather portfolio, complete with accent stitching and a smooth sheen, when it's closed. Open it up, though, and you're greeted with a 13.3-inch screen and a full-sized keyboard above a sliver of thin metal, where the guts of the machine lies. Its convertible hinge -- which folds out from the base of the machine, instead of from behind the screen like Microsoft's Surface -- lets you arrange it like a traditional laptop. You can also pull the Folio's display in front of the keyboard to watch videos, or fold it flat to use as a large tablet. At 3.24 pounds, it's heavier than Apple's 13-inch MacBook Pro, but it's still competitive with other ultraportables. 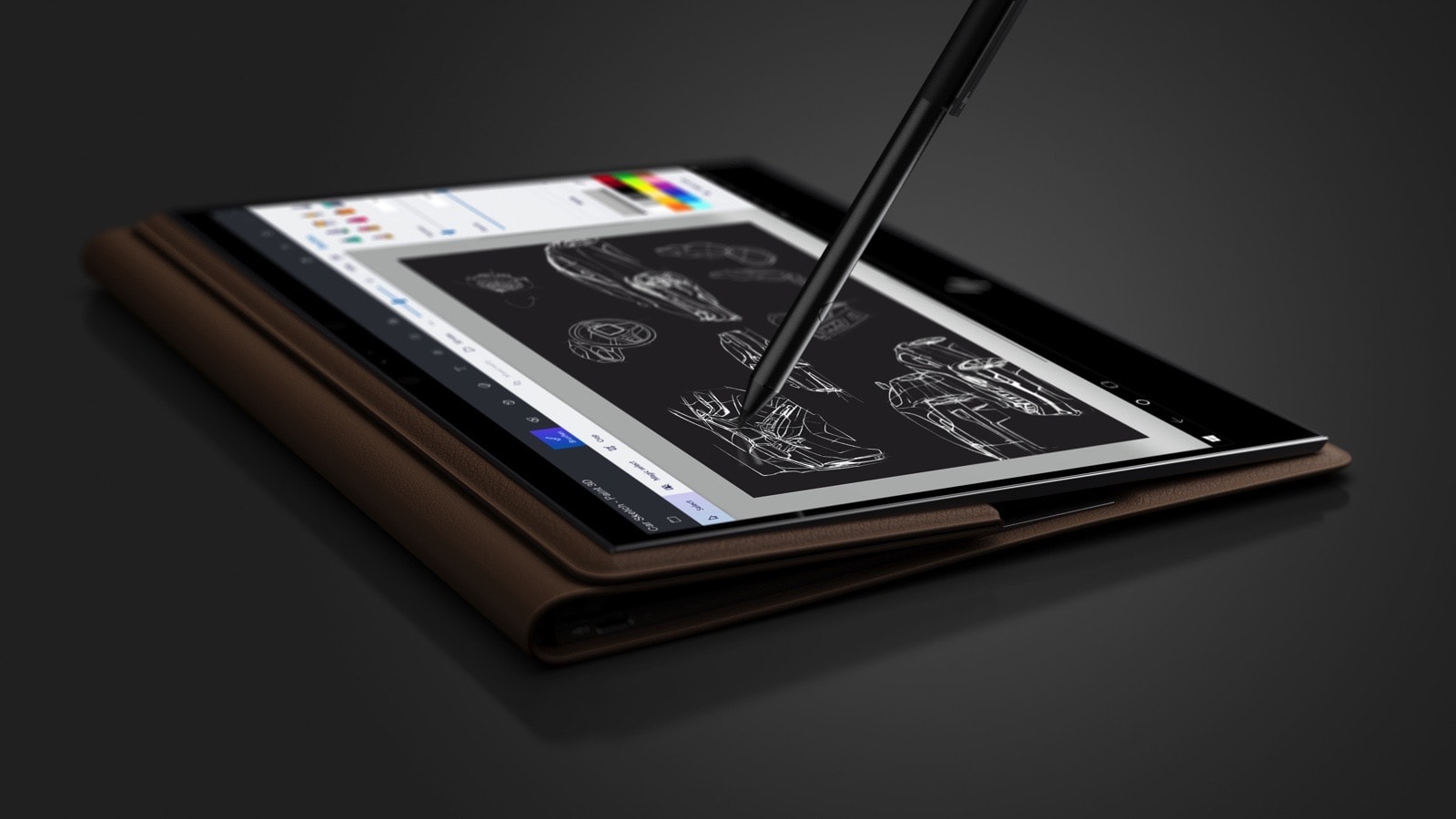 Leather isn't its only pioneering feature: the Folio is also the first computer use the new dual-core, 8th generation Y-series Intel CPU, which allows for its completely fan-less design. HP worked together with Intel to build a motherboard that's 20 percent smaller than most laptops. That partnership also led to the Folio being the first gigabit LTE notebook on the market, with support on AT&T, T-Mobile and Sprint (which is also offering six months of free unlimited service).

The Folio is also the first to use Intel's low power display technology, which can potentially cut screen battery use in half. And since HP is aiming for this to be a flagship "Always Connected" PC, it also stuffed in a huge battery with up to 19 hours worth of juice on the Core i5 model, and over 17 hours on the Core i7. (The LTE model clocks in just below 14 hours of battery life.) 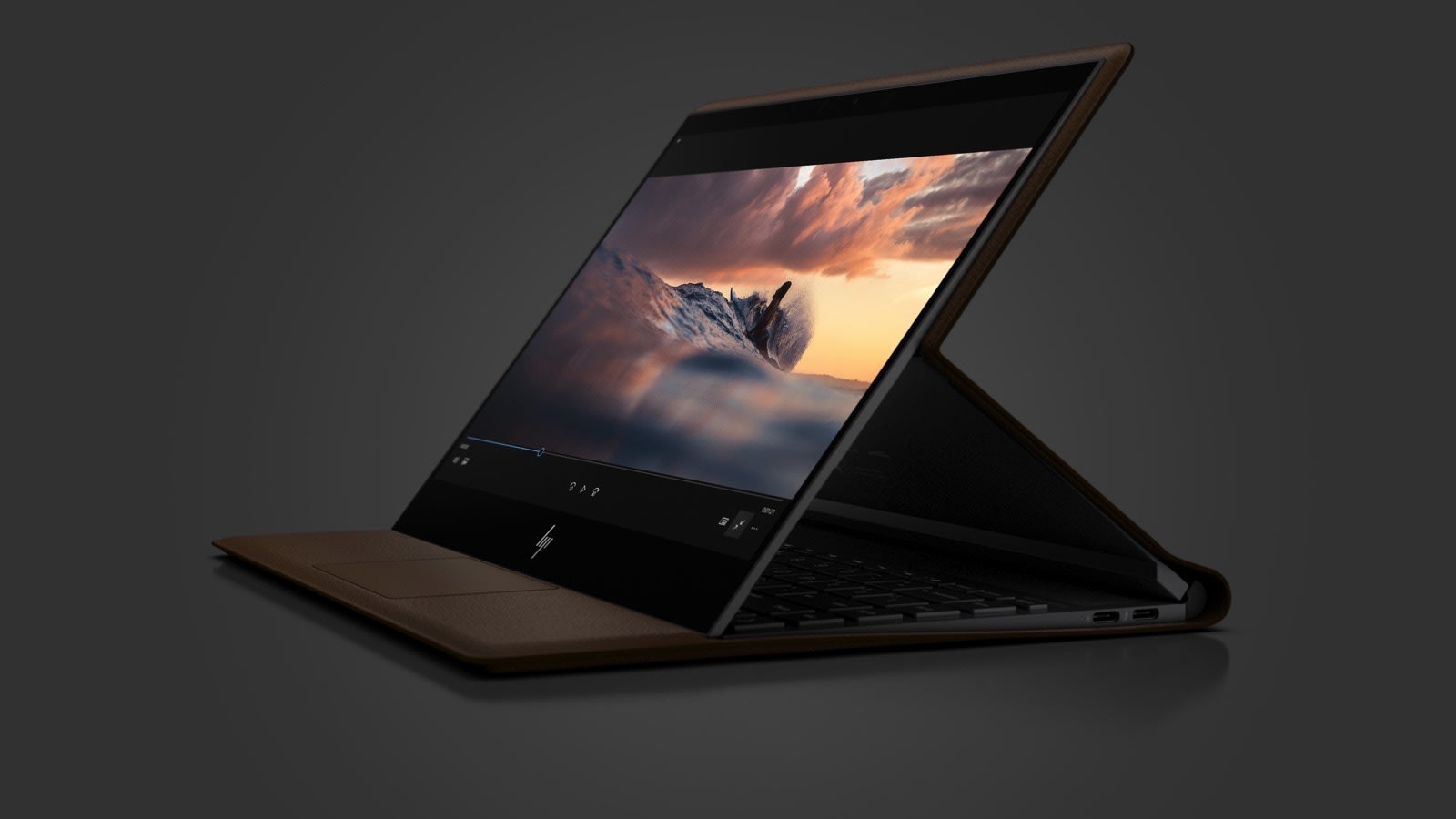 But why even make a leather laptop in the first place? According to Jo Tan, HP's vice president of premium notebooks, the company started brainstorming ideas for new designs two years ago. Plastic wasn't very interesting, since it's something you find on bargain-bin machines everywhere, and metal already dominates premium designs. But leather is different. It has an almost vintage appeal, and it's soft and warm to the touch. While Dell used leather accents on the XPS Studio 13 a decade ago, HP is going a step further and building the case itself out of the material.

What's most striking about the Spectre Folio is just how much different it looks and feels than any other notebook on the market. Sure, at it's core, it's another ultraportable convertible -- the latest entry in the category Microsoft popularized with its Surface devices. But HP's use of leather is almost alien. It's like something from a completely different timeline of technological evolution, one where gadget makers didn't avoid a material that humans have relied on for thousands of years. HP's experience with premium laptops is also on full display with the Folio. Every angle of the device feels finely crafted, from the curve of the leather spine as it rests in your hand, to the smooth way the hinge transitions between different orientations. In the prototype unit I saw, I was most impressed by the slice of metal under the keys, which is just thick enough to make room for three USB-C ports. The keyboard feels on-par with HP's recent chiclet designs, with a decent amount of travel and responsiveness, and it pairs well with the smooth touchpad. There's also a small leather slot for HP's Digital Pen, which is bundled with the laptop, and four Bang & Olufsen speakers for rich sound.

You've probably noticed that the Folio moves a bit differently than most convertibles. Its unique hinge design lets you pull the display forward to rest in front of the keyboard, giving the screen a stable platform while catching up on Game of Thrones on your couch. As Tan notes, this is a more comfortable experience than picking up the laptop and rotating the keyboard onto your lap, or folding it into a tent formation, as you would on typical 2-in-1 laptops. 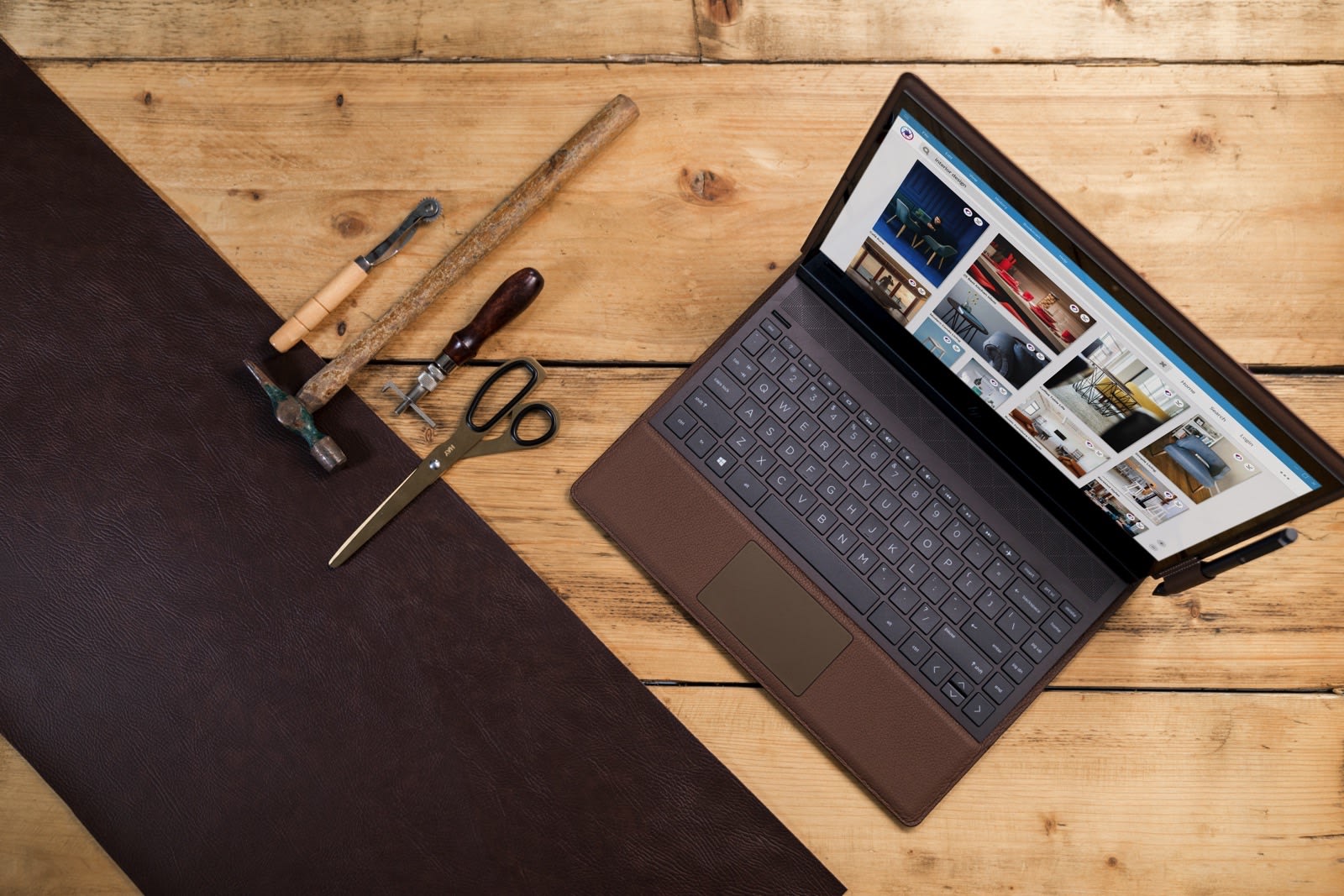 You can pre-order the Spectre Folio on HP and Best Buy's websites starting today. The Core i5 and i7/LTE models will start at $1,299 and $1,499, respectively, while the standard Core i7 model is expected in Best Buy stores on October 29th for an unknown price. Initially, you'll be able to pick up the Folio in "Cognac Brown," but HP also plans to release a "Bordeux Burgundy" option in late December. That's also when you can expect the 4K screen to pop up.

Don't expect every company to follow in HP's footsteps and roll out leather laptops of their own. Still, the Spectre Folio is a spark of inspiration that could convince gadget makers to explore new types of material. And given the popularity of leather phone cases, consumers are clearly interested in covering their expensive smartphones with something beyond metal and plastic.