After three years of dominating ‘best of’ lists, Dell’s 13-inch ultraportable gets a makeover.

There's a reason we've heaped praise on Dell's XPS notebooks over the past few years. They've always been gorgeous and capable machines, with near bezel-less screens that other computer makers quickly copied. Most importantly, they brought an air of refinement to the Windows laptop market -- something you could previously only find from Apple. Dell's latest XPS 13 continues that tradition of excellence, though there are some changes that might irk longtime fans of the lineup.

As you'd expect, the XPS 13 still feels like a high-end machine, thanks to its sleek aluminum case and rock-solid build quality. This time around, Dell added a white interior to its rose-gold case to make it more fashionable. It might just be a taste issue, but many Engadget editors found the new styling to be a bit too cheap and garish for the XPS line.

The woven-glass-fiber palm rest feels comfortable, at least, and Dell claims it's also stain-resistant. Unfortunately, its kryptonite is sunscreen and mustard, so definitely don't bring it to a beach cookout. But, rest assured, you can still snag the XPS 13 with a silver case and black-carbon-fiber interior if you'd prefer to stick with the traditional style. 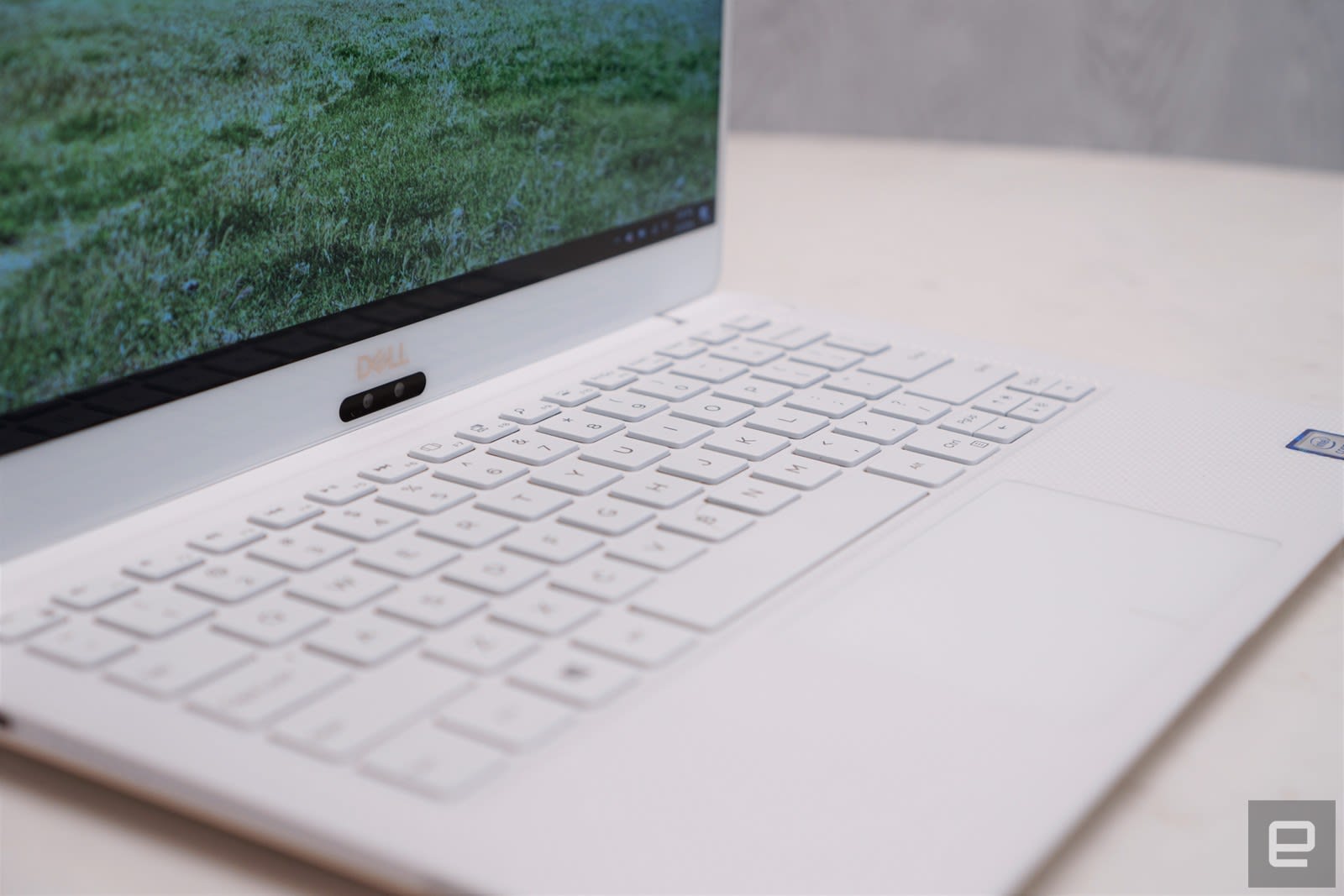 This year's XPS 13 comes in a slimmer and lighter package, weighing in at 2.7 pounds and measuring between 7.8 mm and 11.6 mm thick. In comparison, the previous XPS 13 was a bit heavier if you wanted a touchscreen, at 2.9 pounds. It's light, but because the case looks so thin, it feels denser than you'd expect.

To make the newer case work, Dell had to drop USB-A ports and a full-size SD card slot. Instead, you've got three USB-C ports, two of which are compatible with Intel's Thunderbolt 3 standard, as well as a micro-SD card slot. And yes, you can charge from any of the USB-C connections. Gamers will also appreciate the ability to hook up an external GPU to the Thunderbolt ports, something that wasn't possible in previous models. 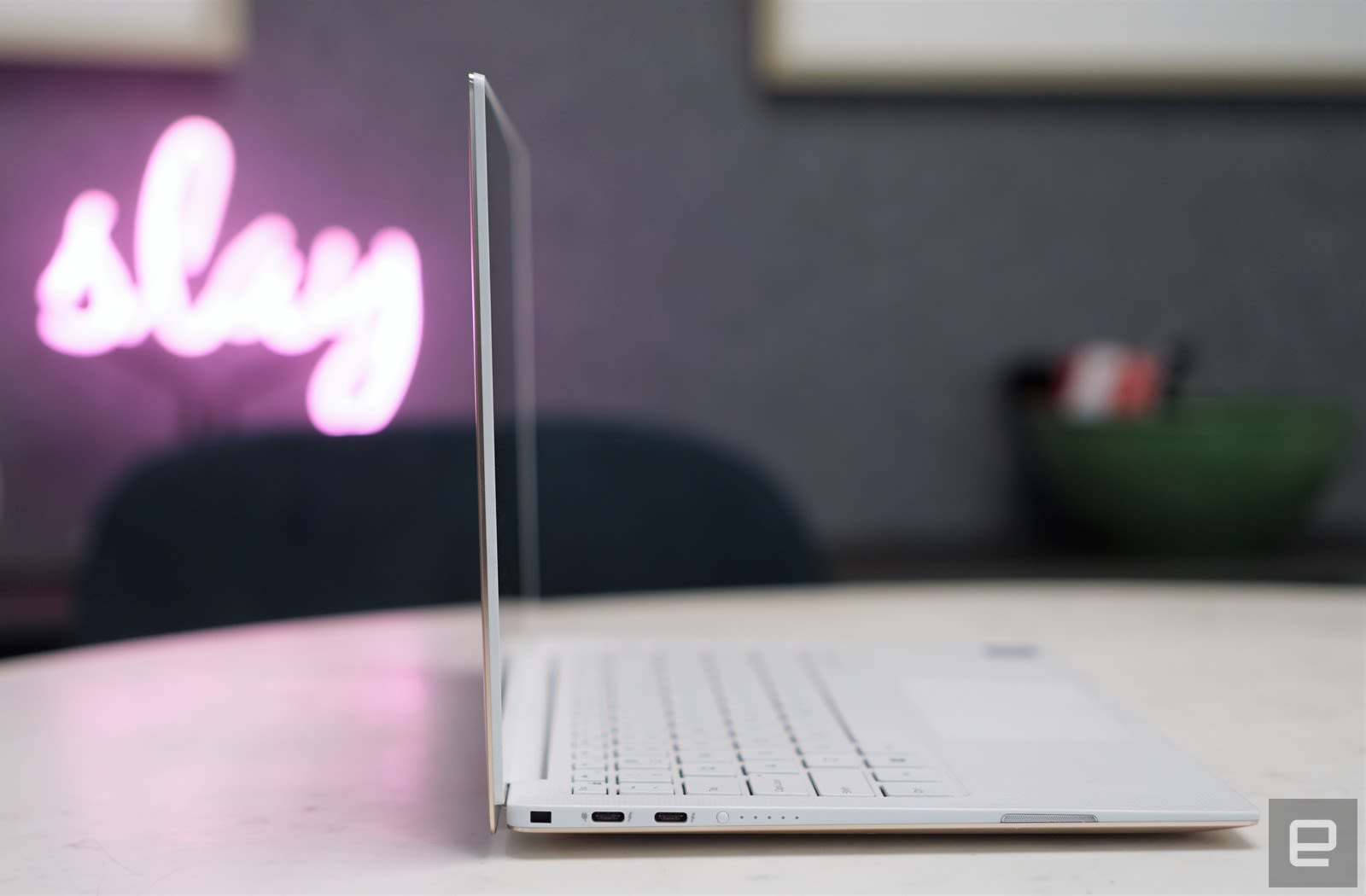 And of course, there's a gorgeous 13.3-inch screen available in 1080p or 4K at the high end. You can choose between standard and touchscreen options, and there's HDR support, finally. That'll let you see video that's both brighter and darker than before. The "InfinityEdge" bezels are 23 percent thinner than before, according to Dell, though it's not something I noticed at first. (Probably because they were already pretty slim to begin with.)

Another minor change: Dell moved the 720p webcam to the center instead of being off to the side. It's still stuck at the bottom of the screen -- which is a casualty of that InfinityEdge display -- but at least it's easier to align your face properly. There are also four far-field microphones in the XPS 13, which will make it easier for you to shout commands at Cortana, or clearly chat with friends over Skype.

There aren't really any surprises with the XPS 13: It's simply a solid and refined ultraportable. It's plenty fast, thanks to Intel's eighth-generation processors. It didn't have any trouble keeping up with my daily workflow, which involves juggling dozens of browser tabs, Slack, Spotify, Evernote and a variety of other apps. Still, I was testing a model with an i7 CPU capable of reaching 4GHz with 8GB of RAM -- the entry-level XPS 13s only have 4GB of memory and slower i5 chips.

I didn't have a chance to hook up an external GPU to the XPS 13, but honestly, I never had much of a need to. I've never expected ultraportables like this to be capable gaming rigs. So far, Dell has only included integrated graphics in its 13-inch premium laptops. And while that's gotten more capable over the years, it's still never going to let you play high-end games. The larger XPS 15 offers dedicated graphics, but you'll have to give up a bit of portability if you go that route. Of course, lugging around an external GPU box kinda cuts into the portability of the machine as well. But it still offers you a way to game seriously when you're at home or at a LAN party. 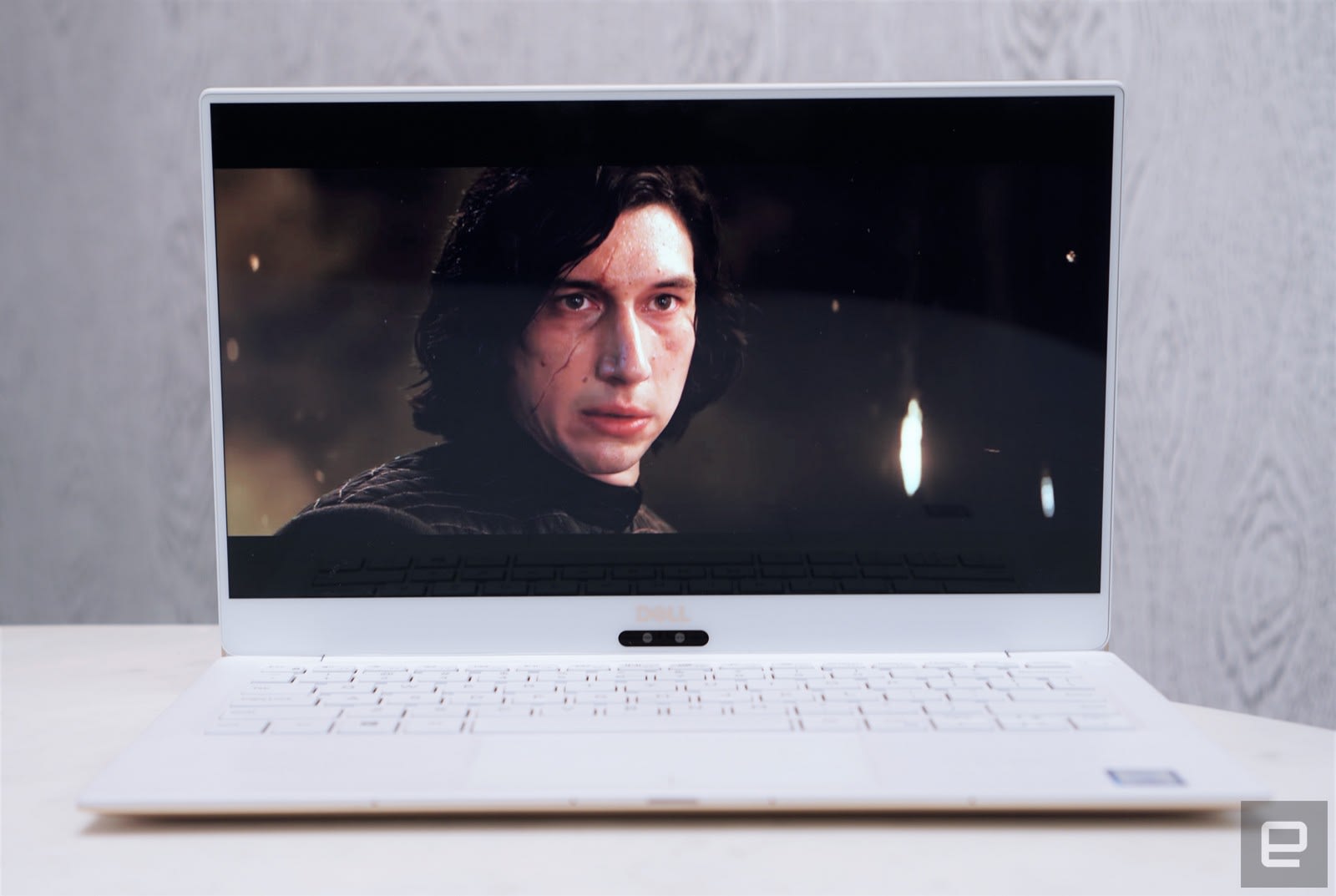 The 4K screen we tested was also impressive: It was bright, sharp and made everything pop. It even fared well in direct sunlight while I was wearing polarized sunglasses (something competitors like the Surface Laptop have trouble with). HDR is a welcome addition. While it's far more essential in your home theater, it's still to be able to enjoy Netflix to its fullest on the go.

Thankfully, Dell didn't change the XPS 13's input options much. The keyboard is still a joy to type on, thanks to its generous 1.3mm travel distance and overall responsiveness. It's one of those keyboards where it feels like words just flow out of my fingers. The Precision touchpad is also as smooth and accurate, as we've come to expect.

In our battery test, it lasted 9 hours and 50 minutes, which is better than the XPS 2-in-1 and the Zenbook 3, but less than what we've seen from the Surface Laptop and other premium notebooks. The somewhat average performance can be chalked up to the 4K display, which takes more power to drive. The 1080p versions of the XPS 13 should get a few more hours worth of juice. 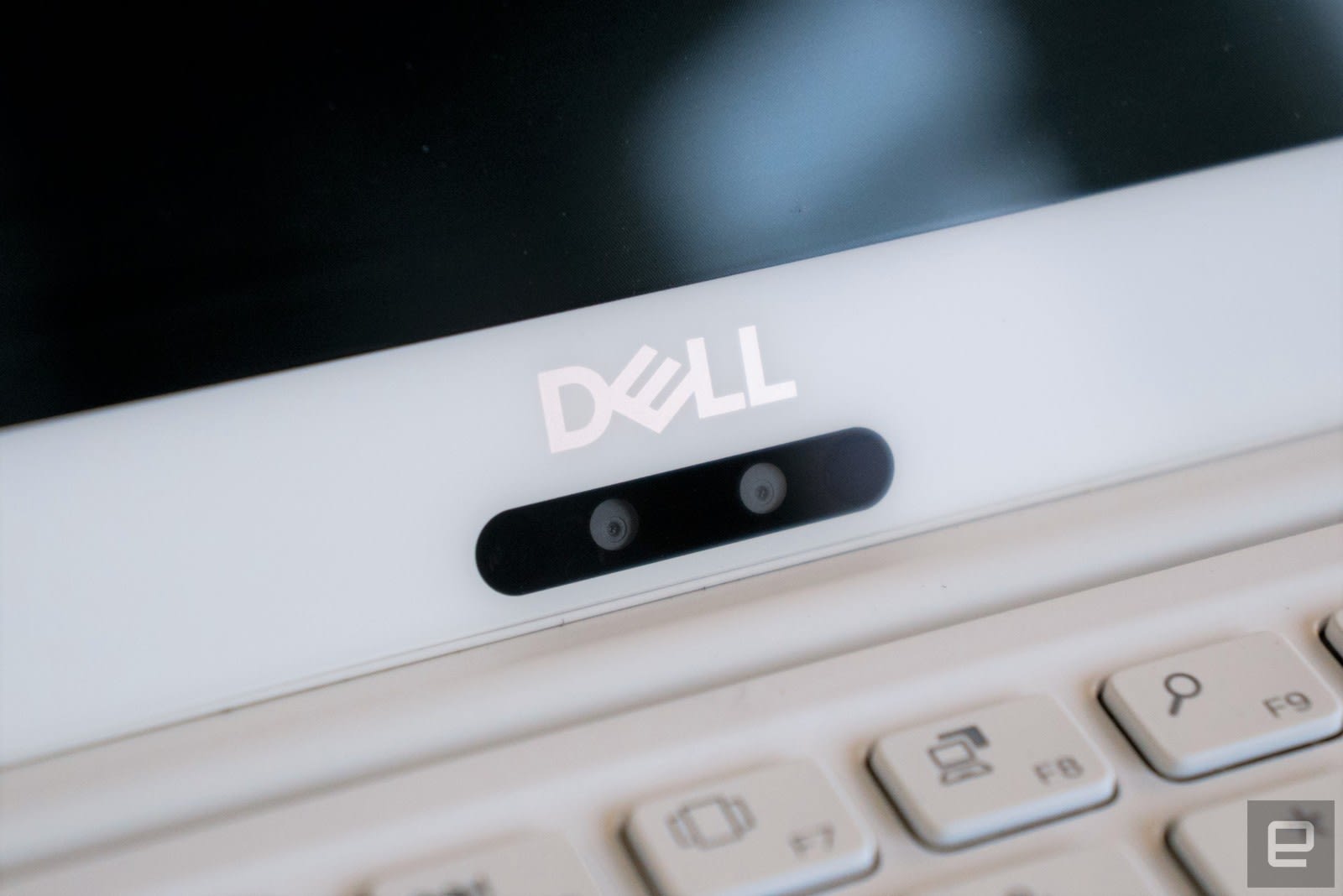 The XPS 13 starts at $999 with an 8th gen Core i5 CPU, 4GB of RAM and 128GB of storage. That's decent, but we'd recommend bumping up to the $1,200 model at least, which has 8GB of RAM and a faster 256GB SSD. It'll perform much better, and last longer without needing an upgrade, as well. Frankly, it's about time PC makers started making 8GB of RAM standard. You might have been able to survive with 4GB a few years ago, but these days, Chrome alone could gobble that up quickly.

As for alternatives, Apple's 13-inch MacBook Pro starts at $1,300 with a seventh-gen chip, while the Surface Laptop starts at $800 (albeit with an underpowered processor). Just as we've seen for the past few years, the XPS 13 is a strong competitor both in terms of price and performance with other premium ultraportables. 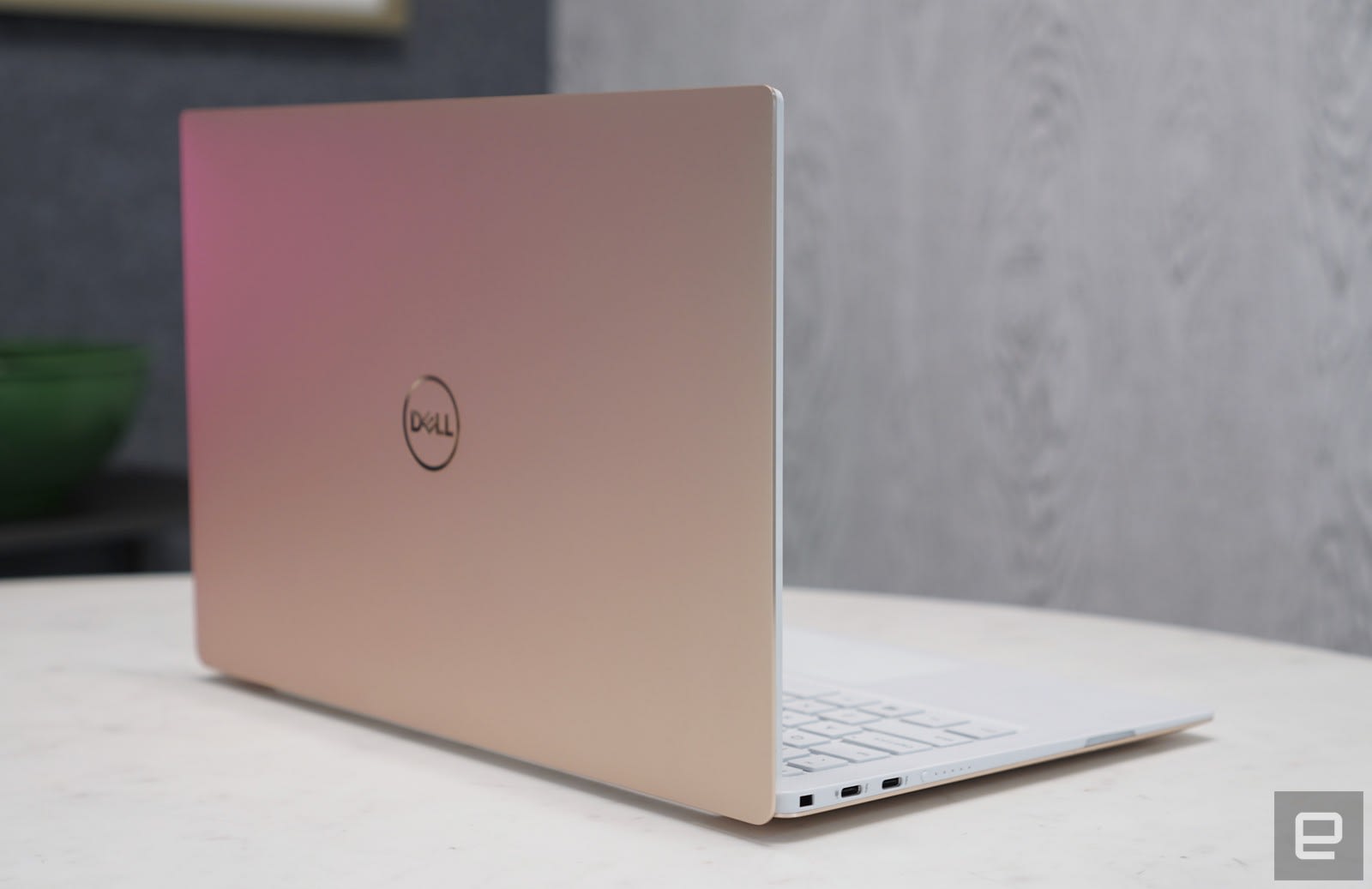 Overall, the XPS 13 remains one of the best ultrabooks on the market. It's fast, sturdy and sports a gorgeous screen. Dell didn't make any big changes to the design, but then again, it didn't really have to. When you've got something as good as the XPS 13 lineup, it's better to stick with what works.