Surface Book 2 review: Microsoft gets closer to the 'ultimate laptop'

Microsoft's Surface Book 2 is an even stronger MacBook Pro competitor than before. Mostly, that's because there's finally a 15-inch model for people who need a bit more screen real estate. But the company has fixed most of the issues we had with last year's 13-inch model, as well. That's particularly true when it comes to the Surface Book 2's unique hinge, which lets you remove and flip around the display. It's the ideal follow up -- one that does everything its predecessor did well without any compromises. It's another strong entry for Microsoft, in a year where it already launched the excellent Surface Laptop and Surface Pro.

As a sequel, the Surface Book 2 focuses on refinement. The smooth, all-metal case makes a return, and it's as sturdy as ever on the larger 15-inch model we received for testing. I didn't feel any flex in the keyboard base or display -- it's almost like a solid slab of metal. Of course, the same was true for the original Surface Book, but it's good to see that design scales well.

As you can imagine, the larger Surface Book 2 is heftier than typical 13-inch systems we see today, at 4.2 pounds. Apple's comparable MacBook Pro, meanwhile, weighs in close to four pounds and it's significantly thinner. (The Surface's hinge, unfortunately, adds a bit of thickness.) The 13-inch Surface Book starts out at 3.38 pounds with integrated graphics, but if you opt for the NVIDIA GPU it jumps up to 3.68 pounds. The similarly-sized MacBook Pro wins out when it comes to overall size, since it's just a mere 3 pounds. 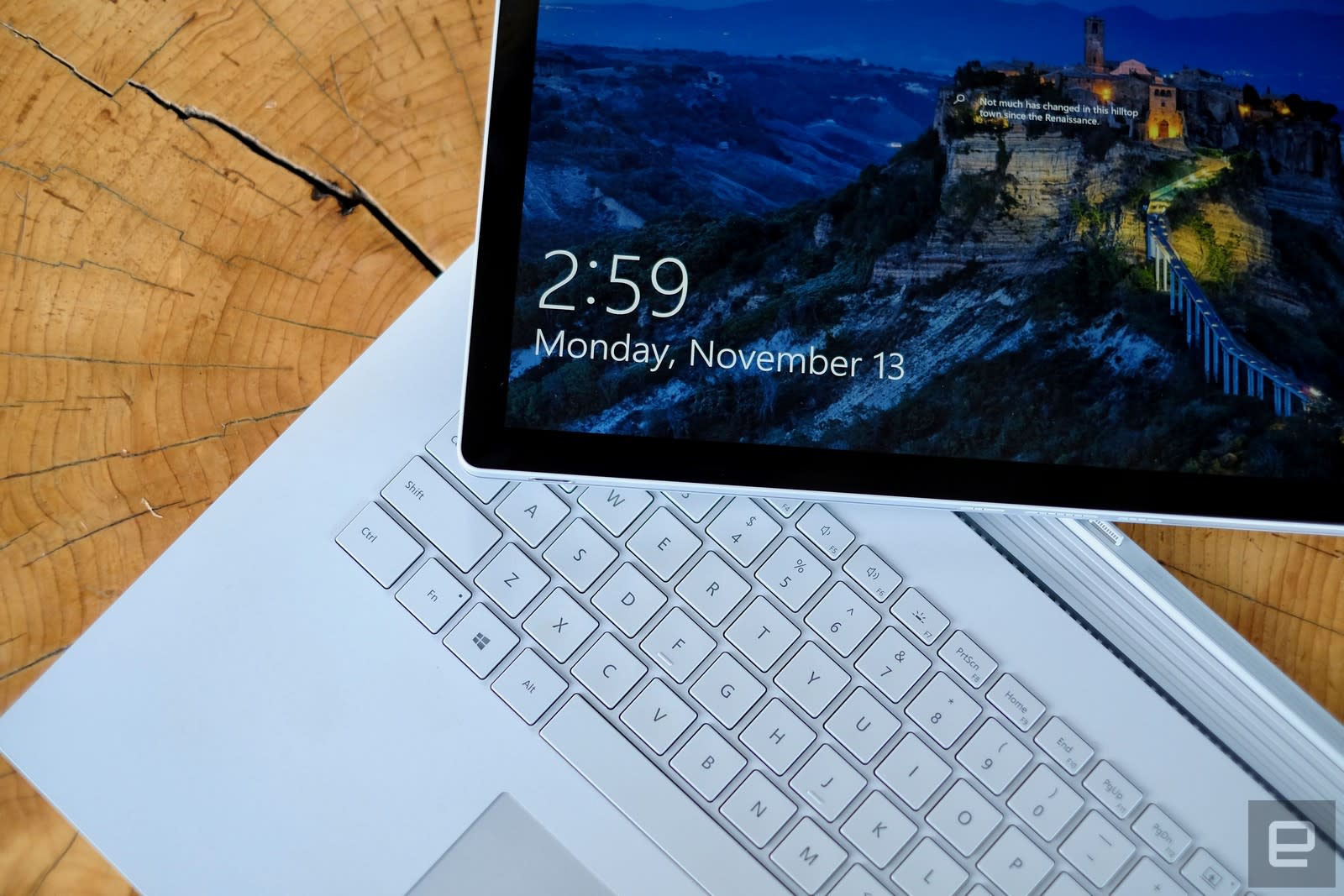 It's been awhile since I've used a 15-inch laptop regularly, but I had no trouble getting used to the Surface Book 2. Despite its added heft, it's comfortable to hold and easy to use on your lap. Of course, it has a larger footprint than most Ultrabooks, but I still managed to get work done in cafes and even on a plane tray table. You'll have to live with a bit of top-heaviness, though, since its hardware is split across its screen and keyboard base. Standard notebooks can get away with incredibly thin displays, since they don't have to stuff an entire computer's worth of hardware behind the screen.

With the 15-inch Surface Book 2, you're also getting a sizable resolution bump up to 3,240 by 2,160 pixels (260 ppi). Sure, it's not 4K, but honestly that doesn't matter much in a laptop this size. It's sharp enough that you won't notice any pixelation in text or images, even when you bring the screen right up to your face. Microsoft is sticking with the boxy 3:2 aspect ratio, rather than 16:9 widescreen. That's helpful when it comes to productivity apps, since it gives you more vertical screen space, but it means you'll have to live with black bars when you're watching movies. 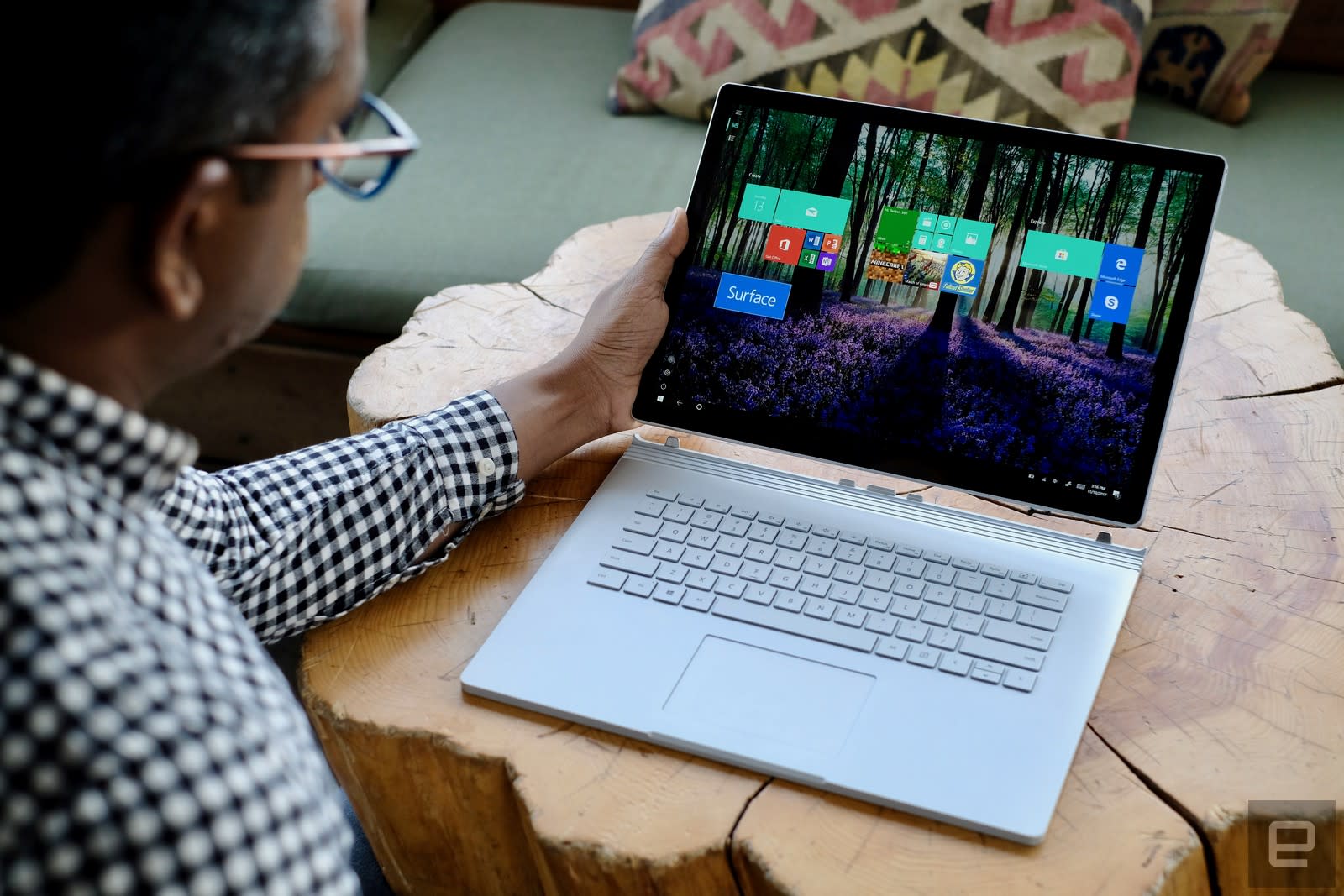 Instead of changing the laptop's overall design, it's clear that Microsoft spent more time revamping the Surface Book 2's hinge. That's what sets it apart from other convertible Windows laptops. The screen pops out to be used as a tablet. Or, you could turn the display around and dock it backwards, which effectively turns the keyboard base into a stand. There's a stronger connection between the screen and base now, which, for the most part, removes the annoying wobbling we saw with the first Surface Book.

There's still a slight amount of shakiness while you type, but it's dramatically less than before. With the last model, it was sometimes difficult to follow what was happening on the screen as it was bobbing up and down. The Surface Book 2's screen detachment feature worked pretty smoothly: Just hit the detach button, wait for the green light, and lift up the display. Removing and reattaching the screen felt smoother than the last model.

The screen is in line with the gorgeous displays we've seen from the Surface family. It's bright enough to use outside, and colors practically pop off the screen. It makes just about everything look great, be it text, photos or movies. While I'd like to see OLED screens appearing in more laptops today, Microsoft is still getting great results from LCDs. 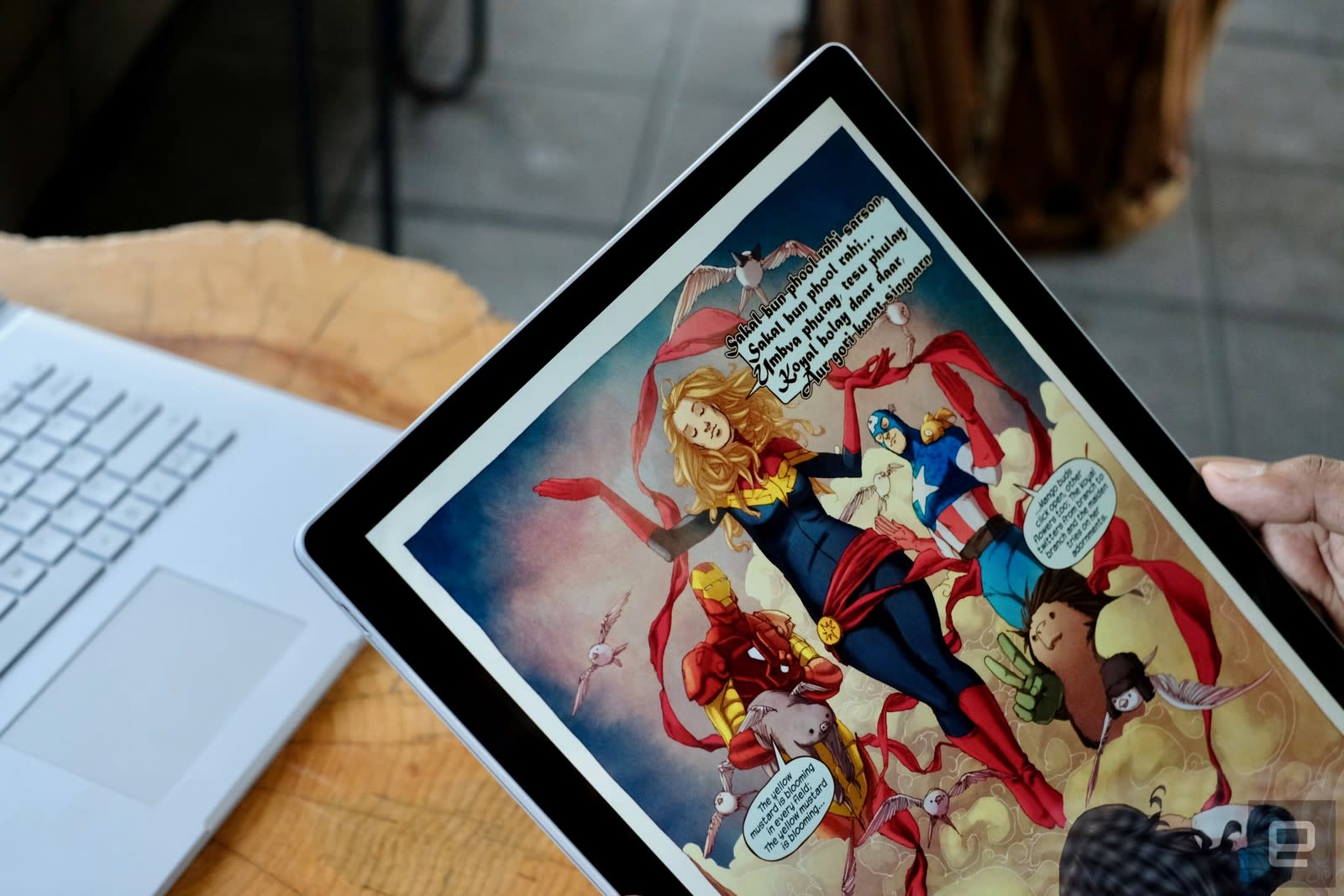 In tablet mode, the Surface Book 2 is almost comically large, but it's still relatively easy to hold and only about as heavy as a hardcover graphic novel. It's not meant to completely replace smaller slates, instead it's a screen you can yank out when you need to read a long article or just watch a movie in bed.

The laptop still features an excellent keyboard, with a satisfying amount of travel distance and a smooth, accurate touchpad. There's some extra wrist pad room to balance out the larger display. Around the sides, it has two USB 3.0 ports, an SD card reader, and for the first time on a Surface, there's a USB-C port. While it's not compatible with Intel's Thunderbolt technology, which supports speeds up to 40 Gbps, instead of USB 3.1's 10 Gbps. Still, you'll at least be able to plug in devices using the new standard, like hard drives and smartphones. You can also charge the laptop over USB-C, but you'll need to buy a separate adapter that can deliver enough juice. 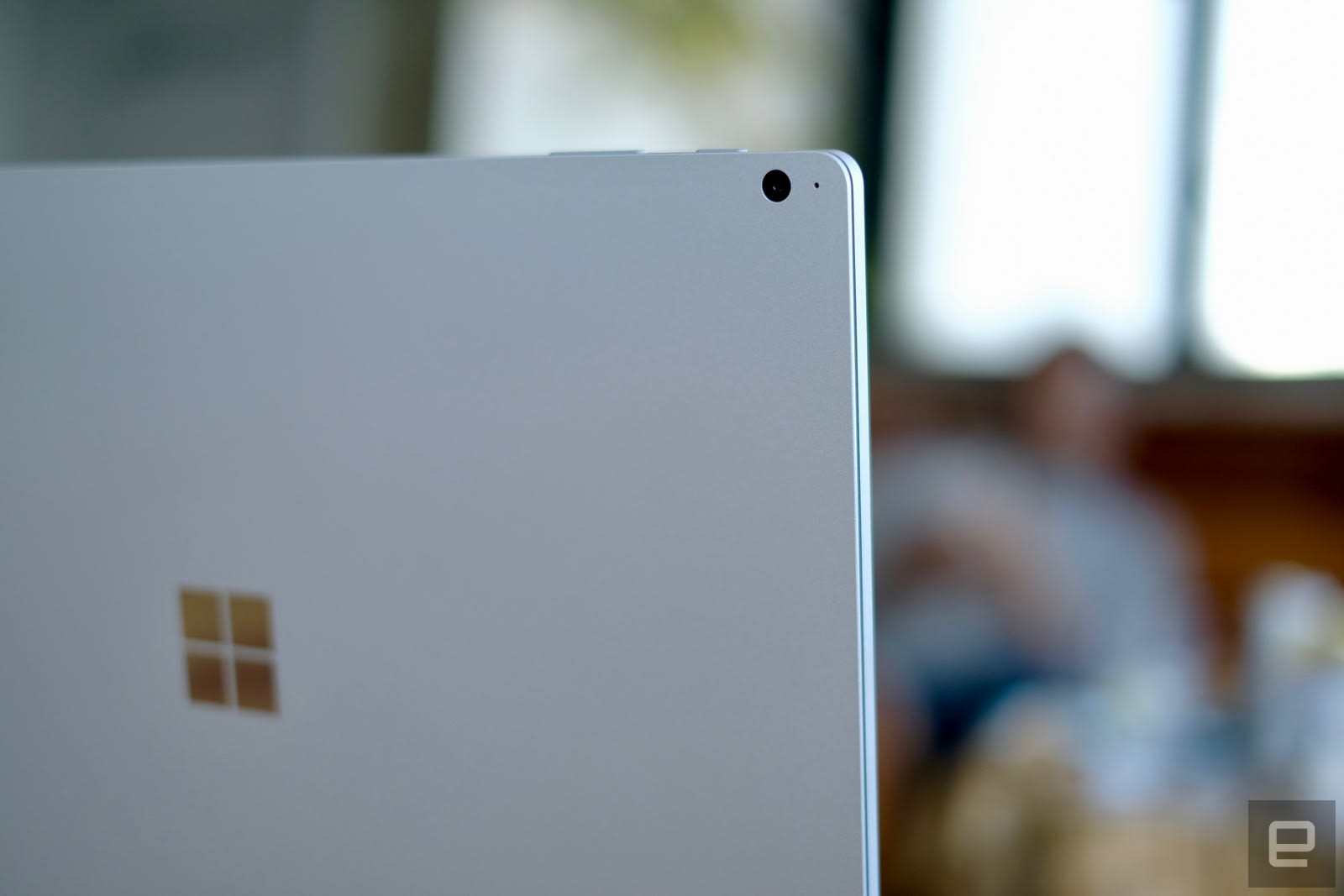 Since it's meant to function as a tablet, the Surface Book 2 also includes a rear 8 megapixel camera, as well as a 5 megapixel front-facing shooter. And just like all of the other Surface laptops, there's a Windows Hello authentication camera on the front, which lets you log in with your face. The Surface Book 2 also supports the Surface Pen, which is particularly useful when using it as a tablet. Though it'd be even better if Microsoft included it in the box, instead of making you pay an extra $100 for it.

Microsoft also packed in some major hardware upgrades in the 15-inch version: An 8th generation Intel quad-core i7 processor and NVIDIA GTX 1060 graphics. The smaller model, meanwhile, starts with a 7th gen Core i5 CPU and integrated graphics, but you can bump it up to the new i7 chip and a GTX 1050 GPU.

Its hefty CPU and graphics capabilities make it well suited to heavy-duty content creation, like video editing and 3D rendering. And of course, that also means it's a decent gaming machine. The Surface Book 2 achieved a solid 60 frames per second in Gears of War 4 while running in 1080p with high graphical settings. And in Forza 7, it clocked between 50 and 60FPS in 1080p with Ultra quality levels. Sure, dedicated gaming laptops can get even better results, but the Surface Book 2 is still impressive.

While Microsoft claims the computer will get 17 hours of battery life while playing video, it actually lasted a surprising 20 hours and 50 minutes in our testing. And that's without any battery saving features turned on. But of course, that's just when it comes to dealing with a local video file. Battery life will depend on what, exactly, you're doing with the Surface Book 2. During my daily workflow, it lasted between 12 to 14 hours. And after one hour of gaming, it lost around 20 percent of battery life. 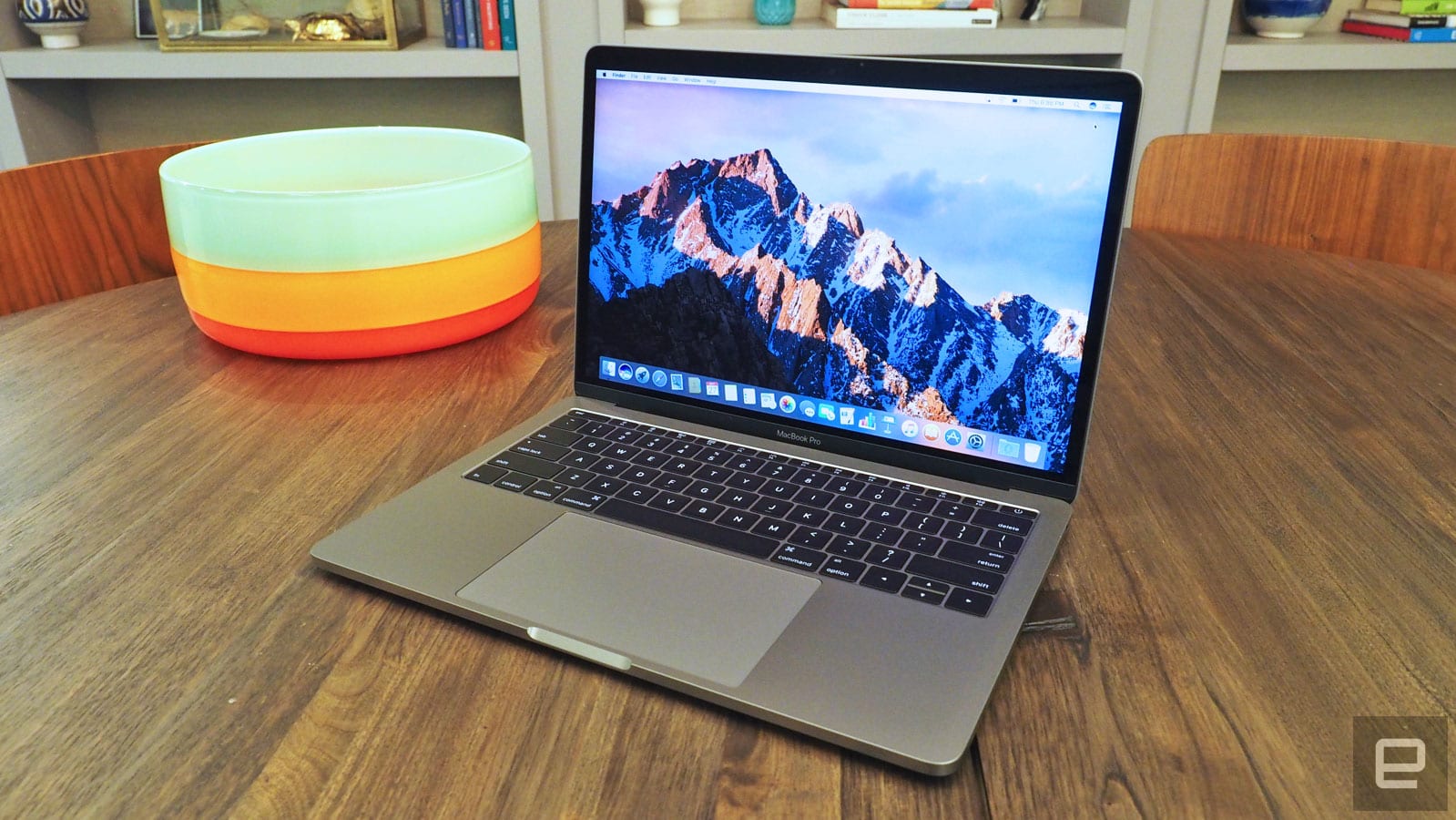 If you're looking at the smaller Surface Book 2, we'd recommend jumping to the $1,999 Core i7 model with NVIDIA graphics. It's $500 more than the entry-level version, but the added cost is worth it for power users. If you have lighter computer needs, the Surface Laptop and Pro might be better options, instead of the cheapest Surface Book 2. And if that's too expensive for you, Dell's XPS 15 costs just $1,299 with GTX 1050 graphics. 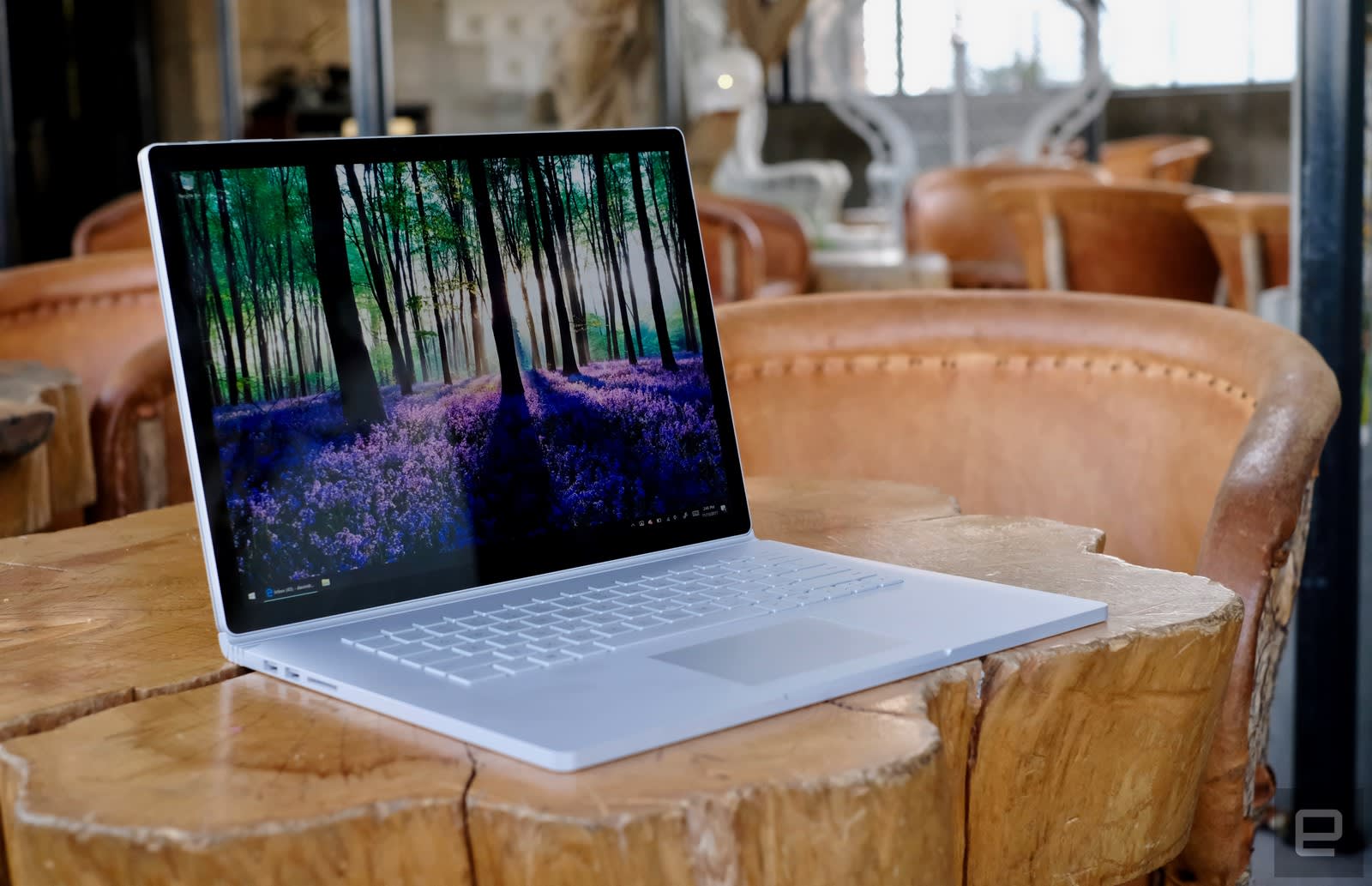 The Surface Book 2 is exactly what we've wanted from a high-end Microsoft laptop. It's powerful, sturdy and its unique hinge doesn't come with any compromises. While there are cheaper Windows laptops out there with similar specs, the Surface Book 2 stands apart by bringing together some of the best hardware around with the flexibility of a convertible notebook. It's the closest a PC maker has come to taking on the MacBook Pro, both in style and substance.