Surface Book 2 hands-on: The sequel we’ve been waiting for

It turns out the Surface Laptop isn't Microsoft's only proper notebook this year. The Surface Book 2 was just announced, and at first glance, it seems to fix all of the issues we had with the original model (as well as last year's refresh). It has a stronger hinge, so there's no more screen wobbling as you're typing, and it's more powerful than before. Microsoft also added a 15-inch model, making the Surface Book 2 even more of a direct competitor to the MacBook Pro line. Based on my short hands-on time with both new laptops, it's clear that Microsoft is once again delivering some stiff competition against Apple's premium notebooks.

At this point, it's pretty clear that Microsoft can build some solid laptops. (If you would have told me that when the terrible Surface RT debuted, I would have laughed in your face.) The Surface Book 2 continues that trend, with sturdy and smooth metal cases that simply scream high-end. And, just like before, you can hit a button on the keyboard to "unlock" the screen to remove it and use as a tablet. Alternatively, you can just flip the display around and plug it back into its base to use the laptop in "studio" mode. It's a similar experience to what you can get from two-in-one convertible notebooks but without being able to flip the screen a full 360-degrees.

The real magic behind the Surface Book 2 is its revamped fulcrum hinge. It's certainly sturdier than before -- I picked it up and tried to shake the screen, but it wouldn't budge. And it was steady as a rock while I tried to type with both notebooks in the air and on my lap. Paradoxically, it's easier to remove the displays as well. Everything around plugging the display and keyboard base together simply works more smoothly, thanks to improved connectors. Unfortunately, the hinge still adds a rounded bump to the Surface Book 2's profile. I don't mind it much, but it could be annoying if you prefer slimmer notebooks. 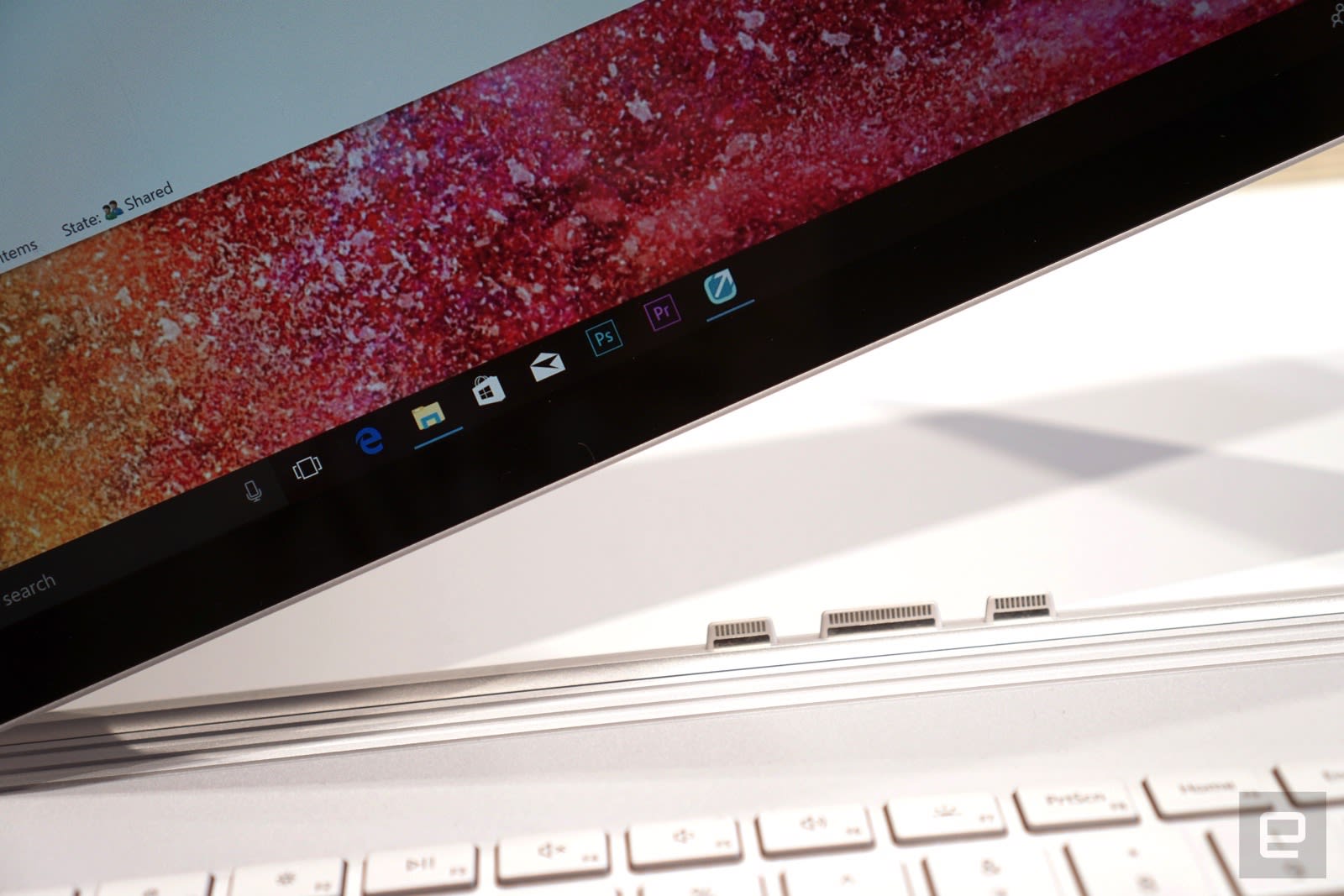 One of the big complaints with the original Surface Book was how much its screen moved while you were typing. It wasn't a major issue when you were using the laptop on a flat surface, but it could get frustrating when you had it on your lap. It was a constant reminder that you were using a tablet that connected to a keyboard base rather than a traditional notebook. Of course, it makes sense that Microsoft ended up delivering a stronger hinge. It simply wouldn't have been able to add a larger model without it.

While the 15-inch Surface Book 2 is slightly heavier than the comparable MacBook Pro -- 4.2 pounds versus 4.02 pounds -- it still feels easy to hold. And for many, the additional weight will likely be worth it for more powerful graphics. The larger Surface Book 2 features NVIDIA's GTX 1060 GPU, which is far more capable than the 15-inch MacBook Pro's Radeon 555 and 560 GPUs. The smaller 13-inch Surface Book 2 weighs in at 3.38 pounds or 3.68 pounds, depending on if you're getting integrated graphics or NVIDIA's GTX 1050. Apple's slim 13-inch MacBook Pro is a mere 3 pounds, but once again, Microsoft's laptops have the graphics advantage. 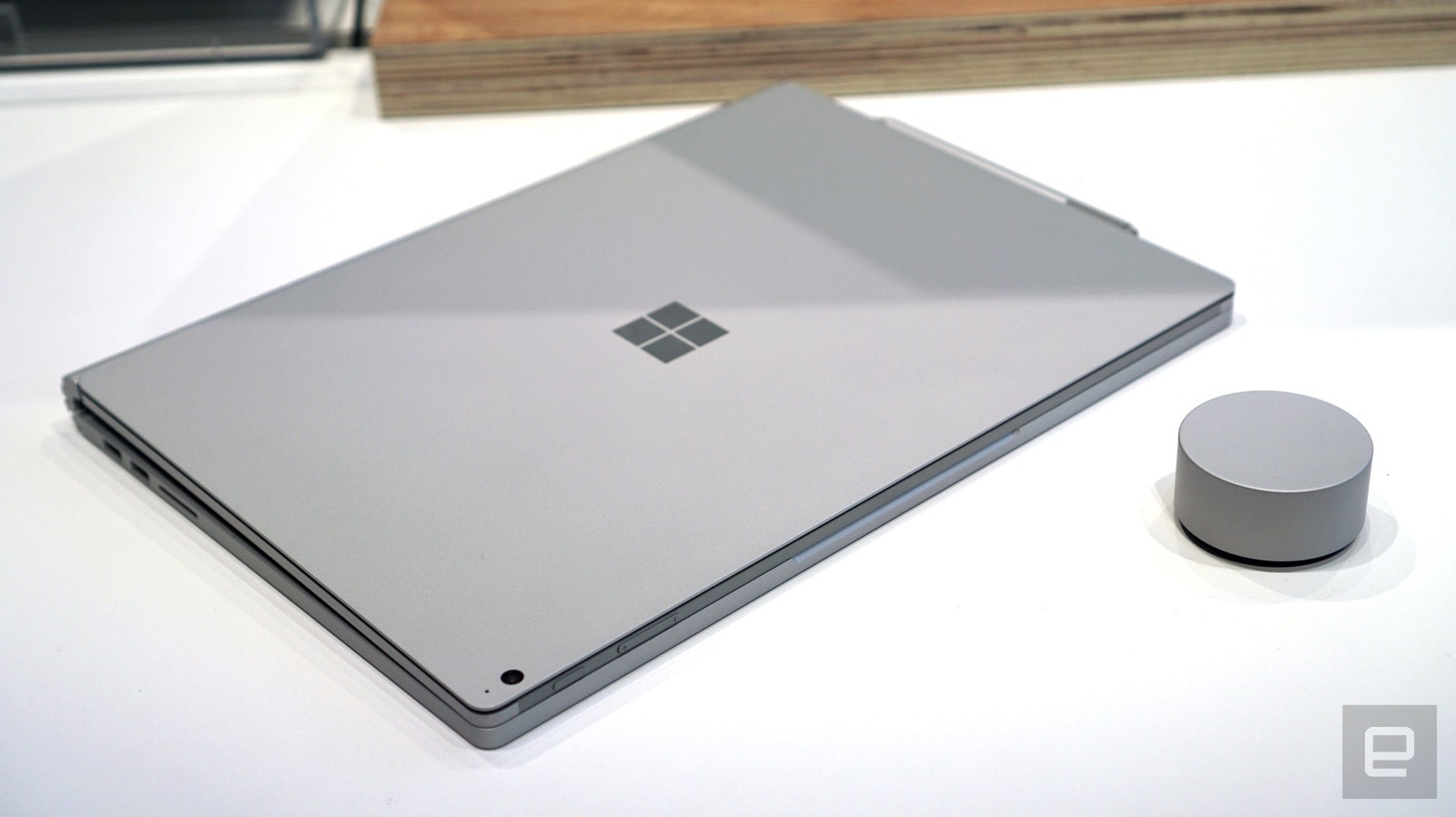 Both Surface Book 2 models feature gorgeous displays, something Microsoft has gotten steadily better at over the past few years. The 13.5-inch notebook still features a 3,000 by 2,000-pixel display, while the 15-inch one sports 3,240 by 2,160 pixels. While they're not 4K, they still look very sharp when displaying text, photos and video. Both screens also felt well-balanced when in standalone-tablet mode. The smaller one weighs 1.59 pounds, while the 15-inch display clocks in at 1.8 pounds. Sure, they're far heavier than the iPad and just about every other standalone tablet. But they're still easy to hold if you just want to watch Netflix in bed or read The New York Times app on the couch without holding the keyboard.

Because these are Surface devices, you can bet that Microsoft is pushing its new Surface Pen heavily. It originally rolled out with the Surface Laptop, and it works just as well on these new machines. We're at the point where drawing on Surface devices feels almost as instantaneous as putting ink to paper.

As you'd expect, both Surface Book 2 laptops handled just about everything I threw at them, be it dozens of browser tabs while streaming video or games like Minecraft. You've got Intel's new eighth-generation CPUs and their improved graphics to thank for that. At this point, they seem like powerful notebooks that can easily satisfy demanding users. They're also more port friendly than the newest MacBook Pros, with two USB 3.1 Type A ports, a single USB-C connection and an SDXC card reader. 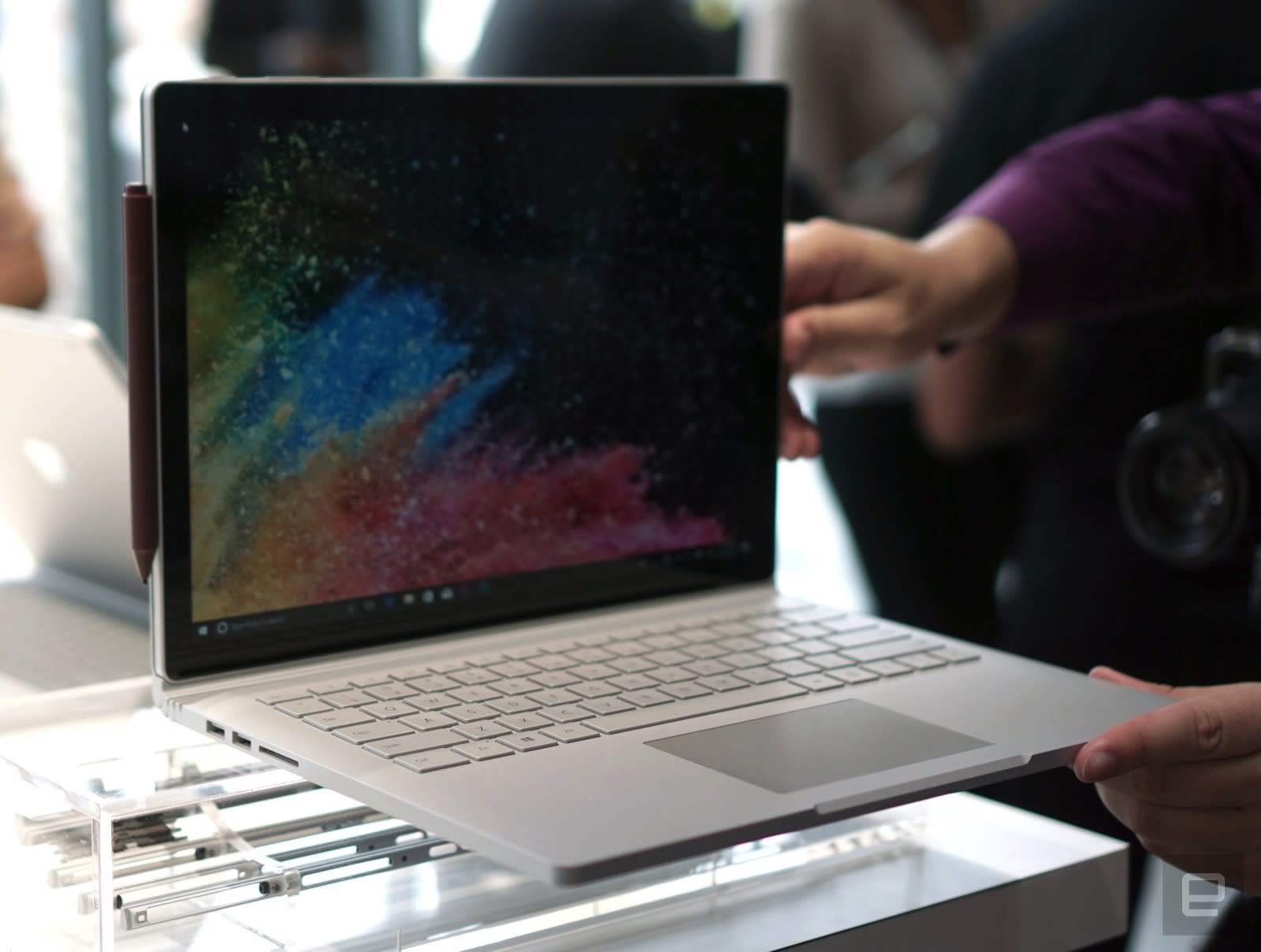 I didn't have a chance to really stress-test either machine, but I'm looking forward to putting them through their paces closer to their November 16th ship date. Microsoft is still being coy about pricing, though. All we know is that they'll start at $1,499/£1,499 for the Core i5 13-inch model with integrated graphics and $2,499 for the 15-inch model. If you want a Core i7 and a dedicated GPU, be prepared to shell out much more.