The 15" Surface Laptop 3 is a bit of a chameleon. It looks a lot like 13" Surface Laptop that we know and love, but under the hood it's another story entirely. Microsoft worked together with AMD to create a custom Ryzen chip with Radeon RX Vega graphics. For the first time, there's an ultraportable Surface with a decent GPU! But what does that actually mean? Well, it's complicated.

First, we have to ask why Microsoft would make a 15" Surface Laptop in the first place. The excellent Surface Book 2 is also available in that size, but it's bulkier and more focused on heavy duty performance. So maybe Microsoft wanted to fill the gap between its 13" ultraportable and its 15" workhorse notebooks. Why not build a bigger ultraportable? The 15" Laptop 3 clocks in at 3.4 pounds, almost a full pound lighter than the Book 2.

While it's not as impressive as LG's featherweight 2.4-pound Gram 15, the Laptop 3 is still light enough to tempt over potential ultraportable buyers who may want a bigger screen. And with that AMD chip, Microsoft can position it as something for when you need a bit of extra processing power too.

For the most part, the 15" Laptop 3 impressed us with its performance. Our review unit featured the top-end Ryzen 7 3780U with Radeon RX Vega 11 graphics and 16GB of RAM. In the PCMark 10 benchmark, it scored higher than Dell's XPS 13 with an eighth-gen Intel CPU, but well below the latest XPS 15 with a powerful Core i9 chip. It also took one minute and 47 seconds to transcode a 4K movie clip to 1080p using Handbrake, whereas that same clip took the Surface Laptop 2 two minutes and 18 seconds. (Unfortunately, we don't have the 13" Laptop 3 yet for comparison.)

And when it came to games, I was able to play Overwatch with medium settings in 1080p at around 60FPS. That resolution was skewed a bit on the Laptop 3's extra tall 3:2 screen, so I ended up playing in 1,872 by 1,248 to get the proportions right. But, honestly, I didn't mind the black widescreen bars when Overwatch was running above 70FPS.

The 15" Surface Laptop 3 also excelled at productivity work. Its large screen gave me plenty of room to dive into web pages and documents. And the display itself is excellent, just like on the rest of the Surface lineup. Colors pop off the screen, making it a great laptop for reading comics, working on photos or watching movies. Just be aware that you'll also have to deal with black bars on all widescreen content. 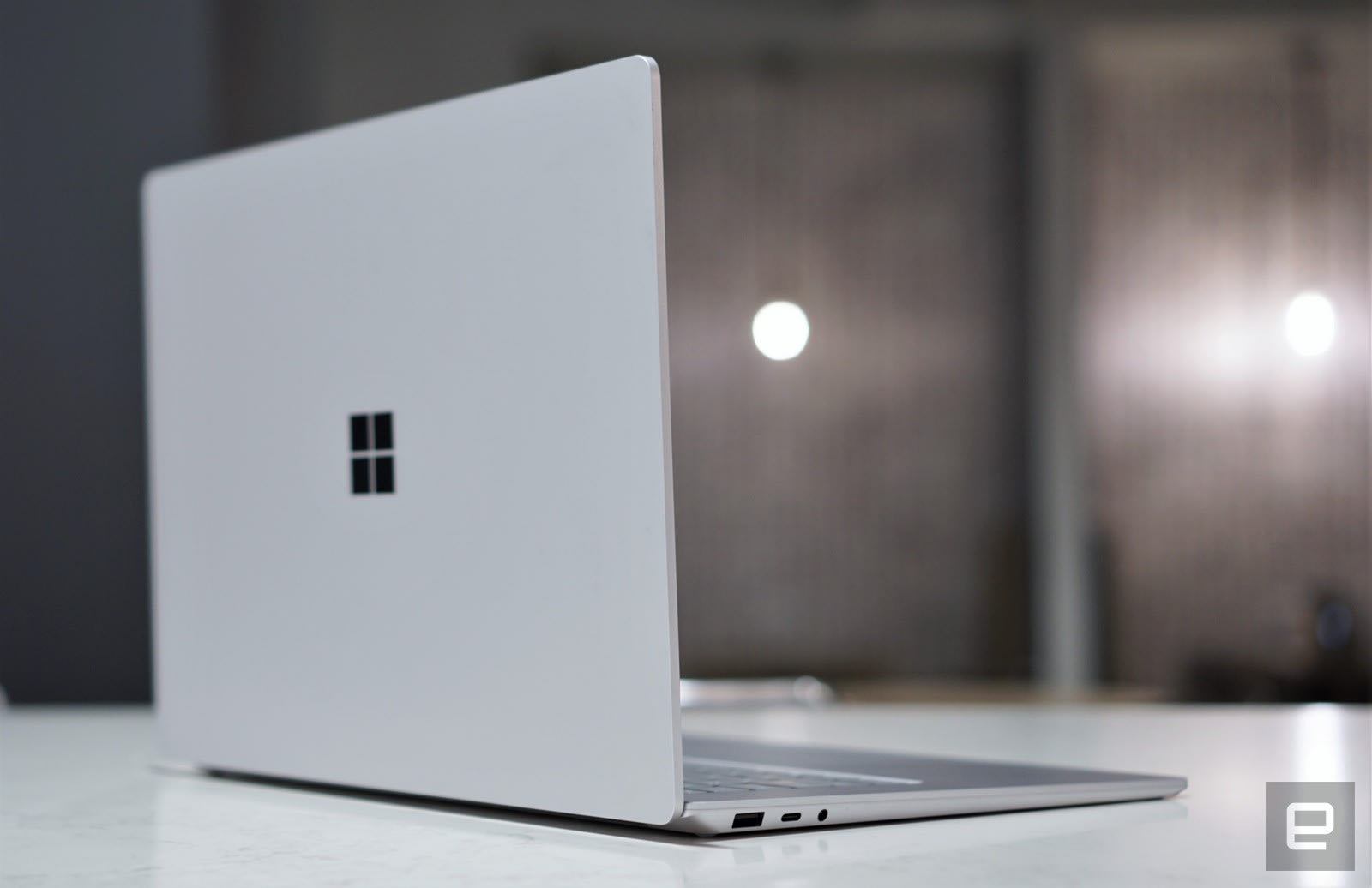 Clearly, AMD was able to craft a chip that can do more than what you'd find on a Typical ultraportable. Intel's latest 10th Gen CPUs feature more powerful integrated graphics than ever before, but they still can't compare to these custom Ryzens that borrow components from the Radeon RX Vega 11 dedicated GPU. Mission accomplished, Microsoft.

What's more impressive is that the company didn't have to change the design of the Surface Laptop much. Honestly, it's easy to mistake it for the smaller version unless they're side by side. The 15" model is bigger, but it's still very thin and an elegant. It also keeps the air of simplicity we've seen from the Surface Laptop line so far. There aren't any extra media keys or distracting lights, it's just keyboard, trackpad and an impressively large screen.

Speaking of those input devices, Microsoft has delivered one of the best laptop keyboards we've ever seen here. Typing felt almost as fulfilling as a desktop keyboard, thanks to a luxurious amount of key travel and plenty of spacing between the keys. The trackpad is enormous, smooth and a dream to use. Microsoft is basically putting every PC maker who can't seem to get these basics right to shame. 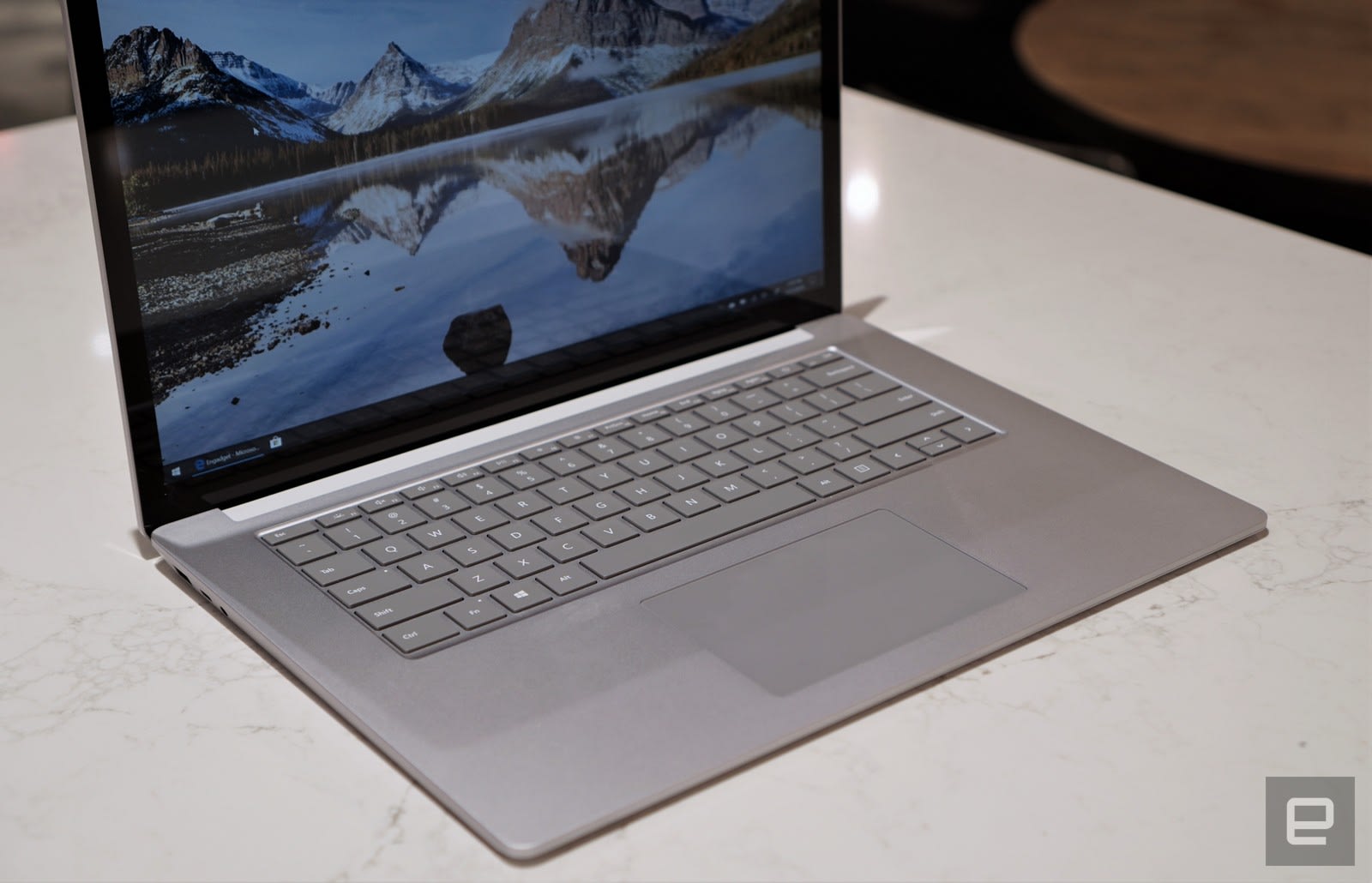 But even though the 15" Laptop 3 is being positioned as more of a workhorse than the 13", it's not really equipped to handle many accessories. There's just one USB Type A and USB-C connection (which thankfully can be used to charge the laptop), as well as Microsoft's proprietary Surface power port. But there's no SD card reader, and no Thunderbolt 3 ports for high-speed accessories like external GPU docks. I didn't really expect Microsoft to make the Laptop 3 as port-laden as the Surface Book 3, but a few more options would have been nice. It also lasted us just seven hours and 50 minutes during our battery test, which sounds decent, except we saw nearly 16 hours of uptime with the Surface Laptop 2.

The 15" Surface Laptop 3 tries to straddle the line between being an ultraportable and a more powerful laptop, but that leads to compromises in both respects. It's not the lightest 15" notebook around, and it's not as capable as larger workstations. You'll also pay quite a bit for the privilege of owning one: the 15" Laptop 3 starts at $1,199, but if you want the high end version that we reviewed, you'd have to shell out $2,099. At that point, you're better off just getting the slightly heavier XPS 15 with a much faster six core CPU and true dedicated NVIDIA graphics for $1,500. 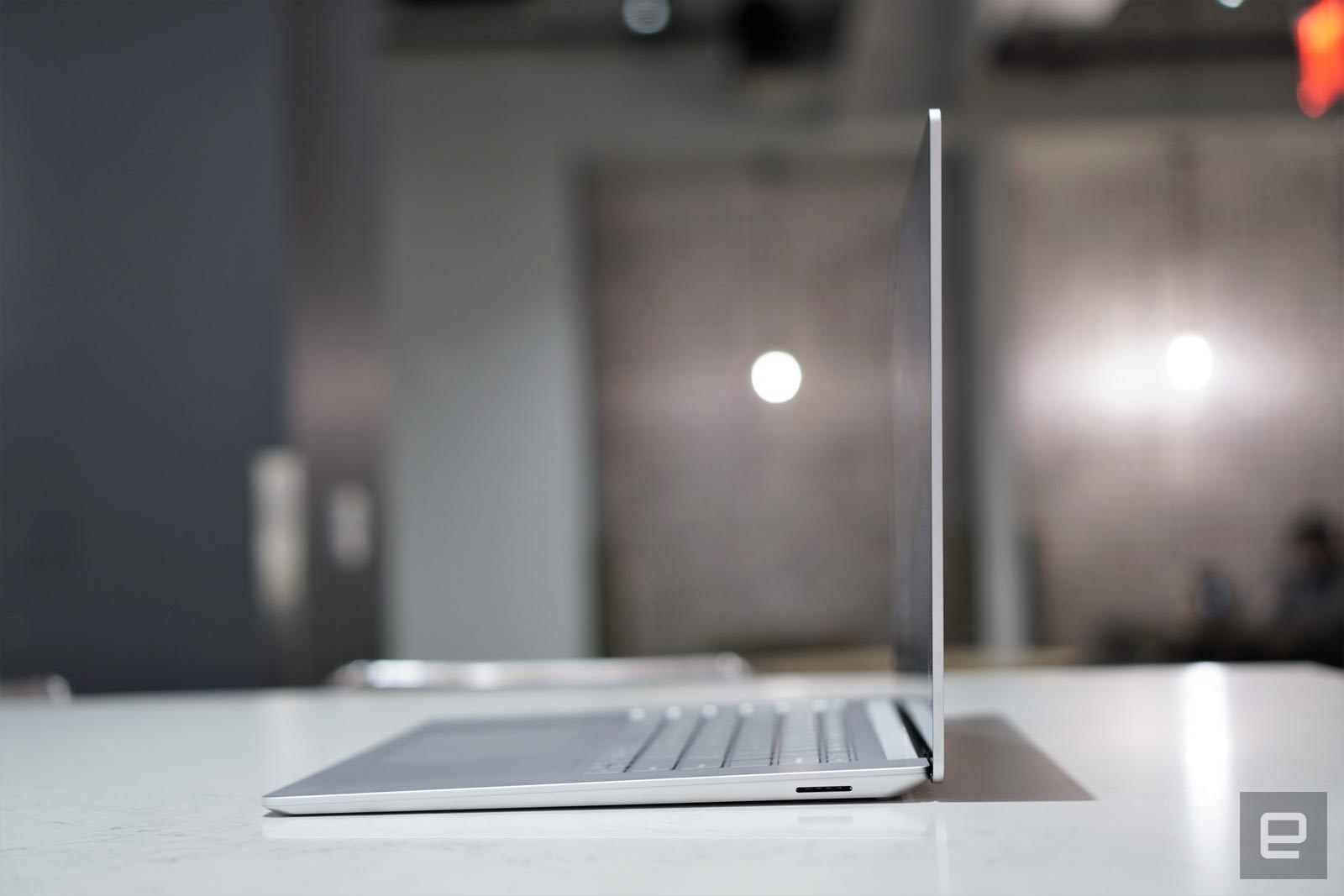 Basically, it seems like the 15" Surface Laptop 3 is for someone who loves the design of Microsoft's ultraportable, but just wants a slightly bigger screen. In that respect, it delivers. I just wish Microsoft pushed a bit harder to make it more capable for power users.