Microsoft Surface Laptop 2 review: The sequel is better than the original

If only it had USB-C charging.

When Microsoft launched the original Surface Laptop last year, I was taken with its gorgeous, minimalist design. This year, I thought, the company can't possibly outdo itself on aesthetics. But then Microsoft went ahead and unveiled a matte-black option that somehow managed to look classier than the three earlier color options. Beyond its elegant exterior, though, the Surface Laptop 2 promises powerful performance upgrades and a long-lasting battery that substantiate its stylish package. Microsoft hasn't changed a whole lot with the new Surface Laptop, even sticking to the same proprietary power charger instead of adopting the more popular USB-C. But despite that inconvenience and some unfulfilled promises, the Surface Laptop 2 still shines.

Everyone whom I've showed the Surface Laptop 2 to agrees with me: This is a gorgeous piece of hardware, thanks to its smooth aluminum case and sleek lines. My test unit's black color happens to be my favorite, but you can also get it in silver, burgundy and blue if you prefer.

At 2.76 pounds (for the Core i5 version we received), the Laptop 2 is exactly the same weight as its predecessor. It's also about as light as the new Retina Display MacBook Air and the Dell XPS 13 without a touchscreen.

The Laptop 2's bright, beautiful 13.5-inch display shows off every tiny detail, even in the gloomiest scenes in The Haunting of Hill House. The screen did get slightly hard to see in harsh light though. The speakers were loud and clear enough for me to hear the ghostly creaks and squeaks, so I was fully immersed in the show.

I also like that Microsoft included a USB-A socket, a Mini DisplayPort and a headphone jack. That's more than you'll find on most competing laptops, but USB-C charging is a glaring omission here. Instead of a charging port that's compatible with the cable for your phone and most other devices, you get the proprietary Surface Power connector -- the same as on the previous Surface Laptop and Book. Worse, the socket is so shallow the charger dropped out of the laptop at the slightest provocation. Sure, it has magnets to help hold it in place, but that wasn't enough to keep the charger from falling right out when I accidentally flicked the wire. It's like MagSafe but flimsier. This was almost annoying enough to be a dealbreaker for me, but the Surface Laptop 2 has enough in its favor that I can overlook it. 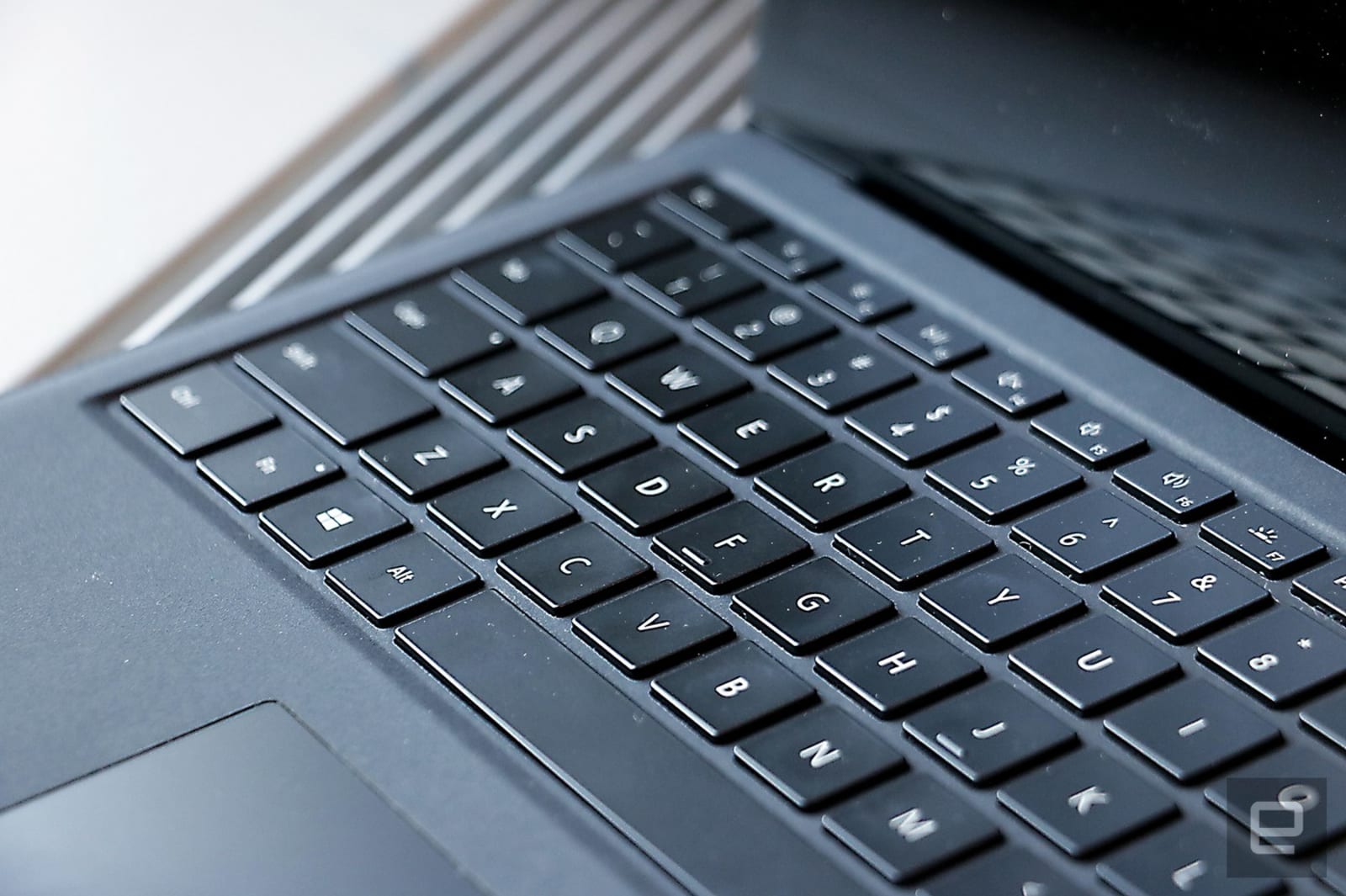 Part of what makes the Laptop 2 so appealing is its keyboard, which is swathed in Microsoft's soft Alcantara fabric. I'm not sure if it'll show signs of wear over time, but so far it has stood up to sweat better than other keyboards. If it does get dirty, you can clean it with some fabric soap and a wet cloth.

The keys themselves are not only well-spaced and comfortable to type on but also quieter than before. The sound is muffled, as if Microsoft stuffed a cushion under each button. This isn't a significant improvement, but it's nice to have when you want to get work done without bothering your neighbors.

I was also impressed by the Laptop 2's glass-covered trackpad. It's smooth, responsive, roomy and frankly, a joy to use. I switched between virtual desktops and apps with three-finger swipes, scrolled with two fingers, and zoomed in on pictures without lag or running out of room. Other PC companies should take note: This is how you make a good touchpad.

The original Laptop shipped with Windows 10 S, which ultimately held back that machine's potential. Microsoft subsequently made it possible to upgrade to the full version at no extra charge, but you'd still have to install the OS manually. This time around, Microsoft thankfully went with Windows 10 Home, unshackling the notebook from its limited app selection. Our review unit has an eighth-generation Intel Core i5 CPU with 8GB of RAM and a 256GB SSD, which was plenty powerful for most of my daily workflow. That usually involves dozens of browser tabs for research and writing, as well as FastStone Photo Resizer for batch converting and watermarking.

The Laptop 2 took about 11 seconds to batch convert a set of 10 photos, which is in line with other eighth-gen Core i5 machines I've tested. Its performance on benchmarks like PCMark, Geekbench 4 and 3DMark falls within range of similarly specced PCs as well and indeed beat the original Laptop, though not by much.

The Laptop 2 also held up well in day-to-day use. It didn't stutter as I flipped between virtual desktops, opening app after app, playing browser games and installing Steam. Once, it glitched after I had tried to lock and unlock it in quick succession repeatedly, but that's the only hiccup I've seen so far. Microsoft's claim that the Laptop 2 is 85 percent faster than the original is probably marketing hype. It certainly doesn't feel 85 percent faster, but it hums along smoothly nonetheless.

I was also impressed by how quickly the Laptop 2 woke up and logged me in via Windows Hello. The device generally turned back on from sleep in less than a second and was smart enough to recognize me from various angles.

It's rated for the same 14 hours of battery life as its predecessor, but the Laptop 2 actually beat the original in our battery test, conking out after close to 16 hours. That's longer than the first Laptop's 14.5-hour result, plus it's better than the XPS 13 (2018) and this year's MacBook Air with Retina Display. As much as I dislike the proprietary charging port, Microsoft's charger rejuices the Laptop 2 pretty quickly: I rebounded to 35 percent after about half an hour. 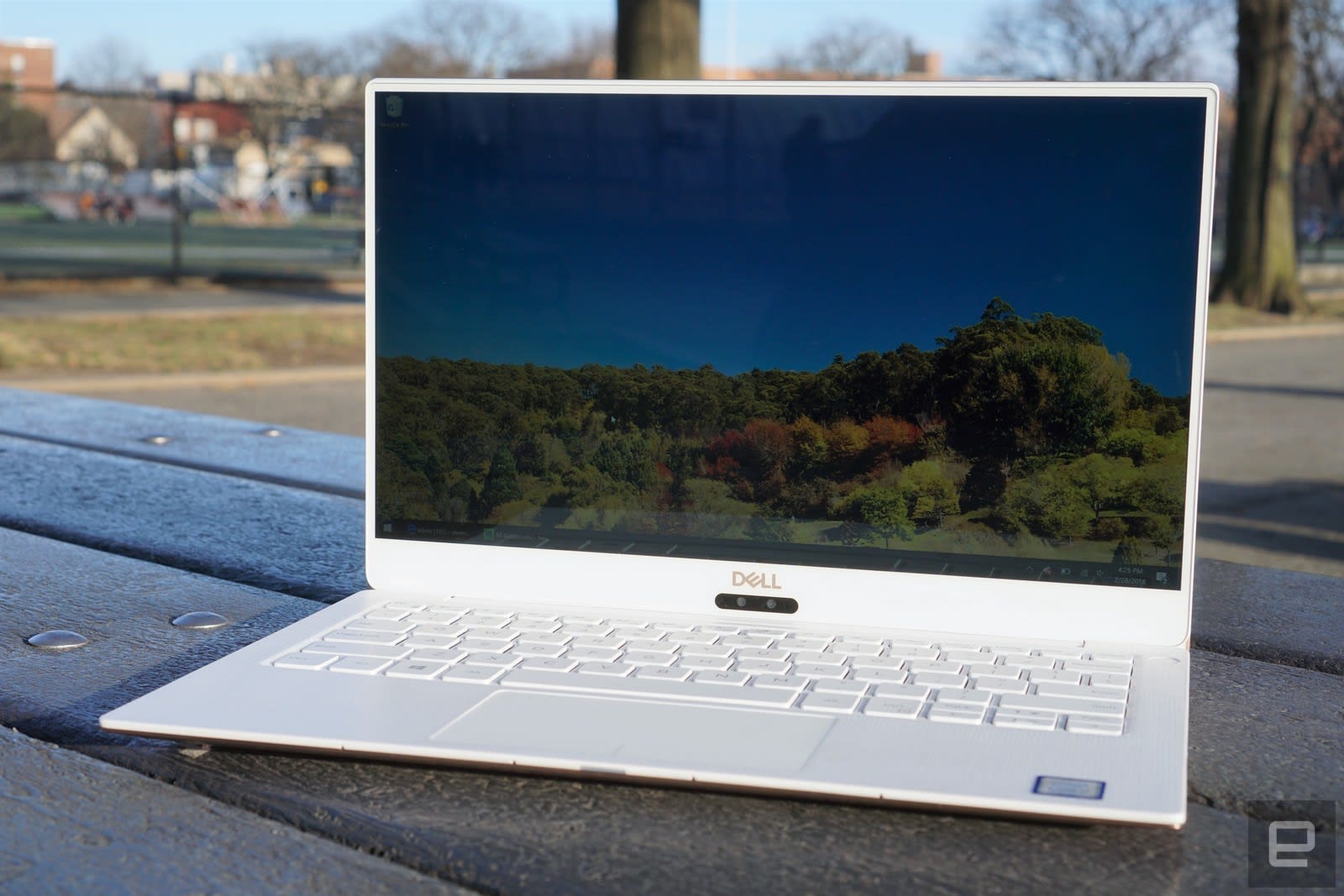 Dell's XPS 13 and HP's Spectre 13 are excellent ultraportables. They offer similarly sharp displays, brisk performance, comfortable keyboards and longer-lasting batteries. The XPS even costs slightly less than the Surface Laptop 2 while the Spectre costs $100 more. Dell's system is a better machine all around, except it looks slightly dated compared to the Surface Laptop.

In case you're not married to Windows, you might like the newly updated MacBook Air. Its keyboard takes a little getting used to, but it offers modern features, a useful fingerprint sensor and a generously sized trackpad. 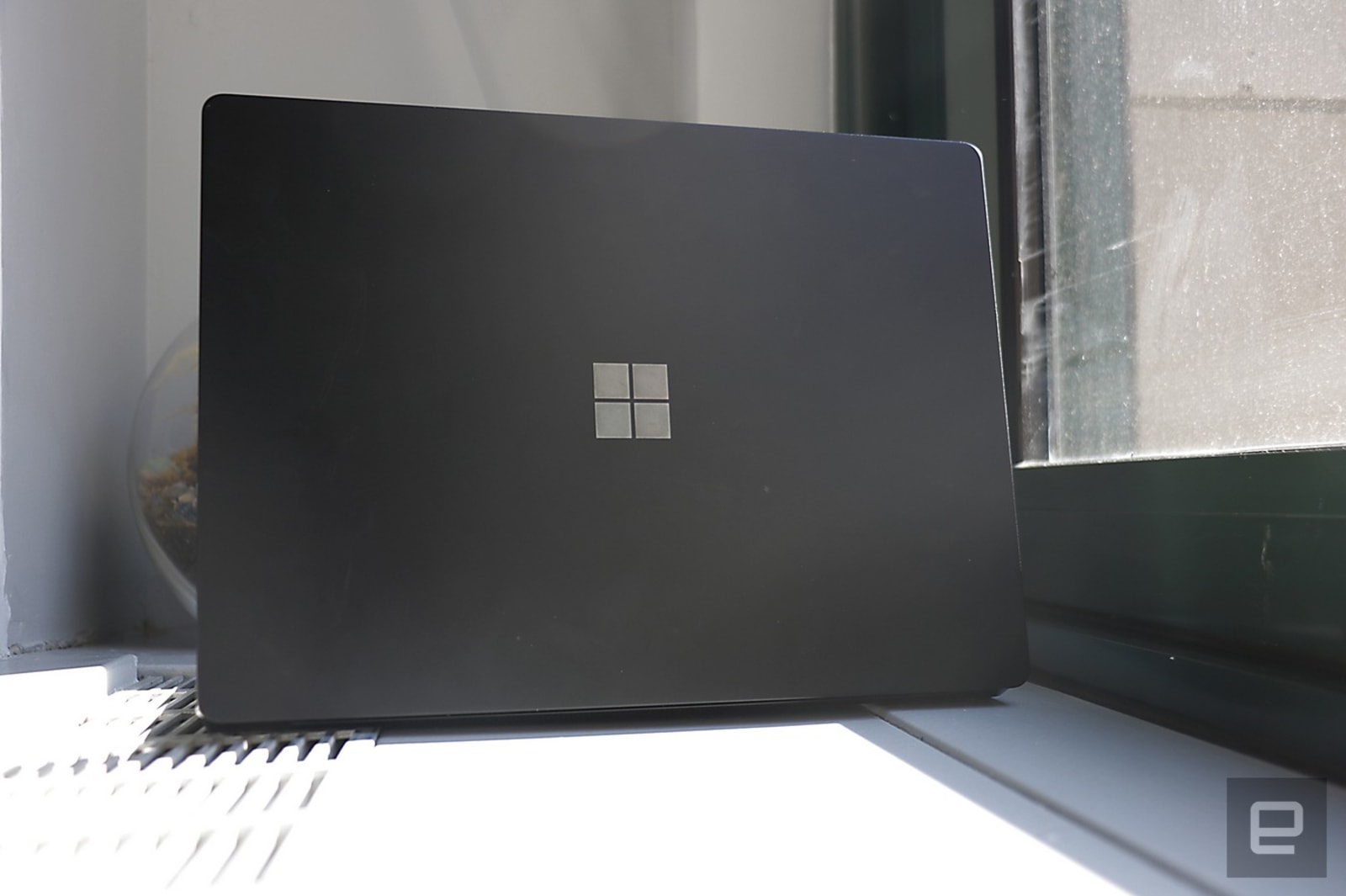 The Surface Laptop 2 is more than just arm candy. With a brilliant screen, comfortable keyboard and reliable performance, the Laptop 2 is one of the strongest notebooks, and its $999 starting price is reasonable for what it offers. The lack of a USB-C charging port is frustrating, but if you can live with Microsoft's inconvenient cable, you'll find the Laptop 2 a satisfying upgrade.