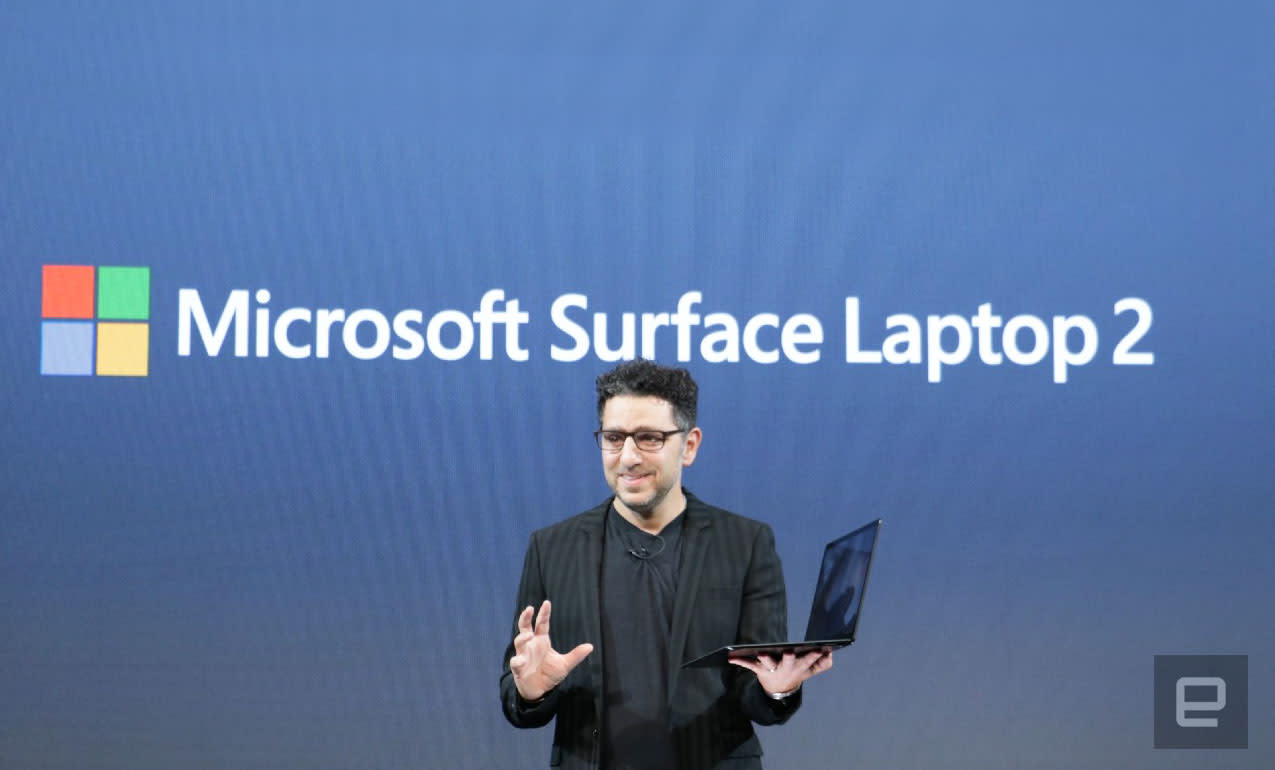 It's been well over a year since Microsoft released the Surface Laptop, which was the most traditional PC the company had produced. But the combo of good design, strong performance and reasonable prices made it one of the best laptops on the market, even as its processor began to age a bit. Fortunately, today Microsoft has seen fit to do away with that looming problem, as the new Surface Laptop 2 has been upgraded to feature Intel's 8th-generation Core processors, just like the updated Surface Pro. The company says that amounts to an 85 percent speed boost over the original Surface Laptop And, as the leaks indicated, the Surface Laptop 2 comes in a sleek matte black color for the first time (also just like the Surface Pro).

Microsoft says that typing on the new Surface Laptop will be quieter than on the original, though we didn't really have a problem with that keyboard. The display stays at 13.5 inches and now has a 1,500:1 contrast ratio, which Microsoft says is best in class. The company also says the computer keeps its outstanding battery life, which is rated at 14.5 hours. The laptop looks identical to the original, as far as we can tell so far, with the obvious exception of the new black color option. As far as pricing goes, the Surface Laptop 2 starts at $999 and it'll be available on October 16th. Much like last year, we expect Microsoft to offer several prices and configurations, but we don't have all the details yet on what that $999 will get you. We'll update this post as we learn more.

The original Surface Laptop was unique not only because it was Microsoft's first true laptop, but also because it ran Windows 10 S out of the box. This Windows variant was intentionally limited to apps from the Windows Store for extra security, a move that was intended to make devices work better in education and business. But plenty of consumers ended up wanting to switch the Surface Laptop back to regular-old Windows 10, which Microsoft now lets users do for free if they're so inclined. Originally, switching from Windows 10 S to a standard Windows installation would cost $50, but Microsoft initially offered the switch for free and then got rid of plans to charge for the switch altogether. (Oh, and they changed the name from "Windows 10 S" to "Windows 10 in S mode," which is the most Microsoft name change ever.)

In this article: gear, personal computing, personalcomputing, surface2018, surfacelaptop, surfacelaptop2
All products recommended by Engadget are selected by our editorial team, independent of our parent company. Some of our stories include affiliate links. If you buy something through one of these links, we may earn an affiliate commission.