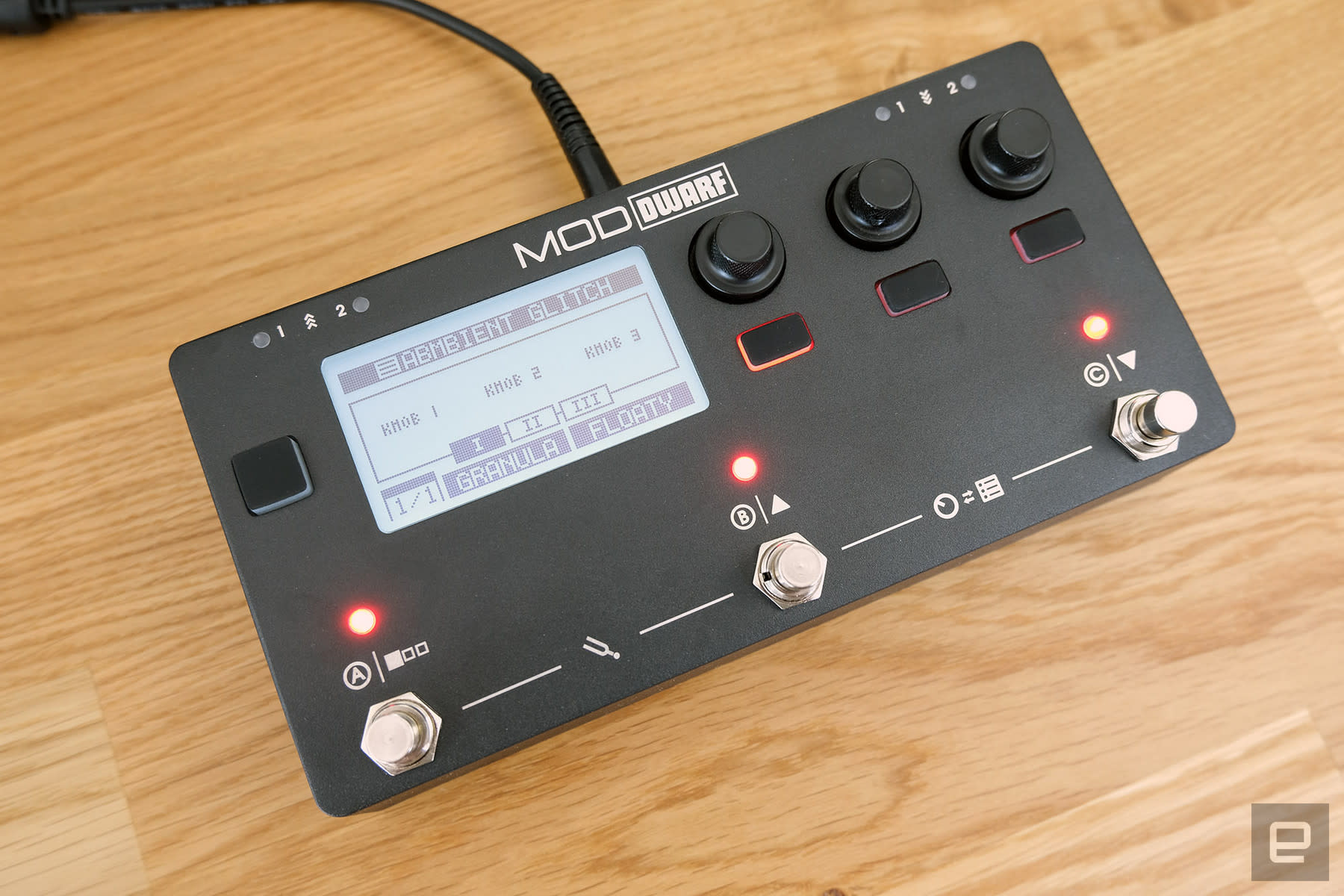 The platform still needs polish but shows a lot of potential.

Mod Devices’ Duo and Duo X are certainly unique in the world of effects processors. They’re basically computers in a performance-friendly format that you build virtual pedalboards on using open-source plugins and a browser-based interface. They’re not without their flaws, though. The flagship Duo X is prohibitively expensive at $765. Especially considering the platform and company are still relatively unproven. And the original Duo was both pricey at $449 and had very rudimentary onboard controls. The new Mod Dwarf doesn’t solve the pricing problem, unfortunately. Though it was originally expected to retail for around $365, it’s now listed at $499 on the company’s site. But it does offer far more comprehensive controls than the DUO in a much more pedalboard-friendly format than the Duo X.

Note: The demo below is recorded directly from the Mod Dwarf using the built in amp simulations and some light EQ and compression. Any noise in the recording is due to the preproduction power adapter.

One thing that Mod Devices has proven adept at is building sturdy hardware. Just like its previous products the Dwarf feels road ready. It’s probably not as dangerous to your toes as the much heavier Duo X, but it’s still plenty robust. The three footswitches are solid, the four buttons offer satisfying feedback and the three endless encoders have a satisfying amount of resistance. The single screen feels a bit more cramped than the dual display interface on the Duo and Duo X but it never posed a problem.

Around back there’s still plenty of connectivity options:

One thing you won’t find, though, is an expression pedal port, which is disappointing. Effects like the Super Whammy plugin (obviously an emulation of the Digitech Whammy) basically demand one.

The Mod platform got a major update in early April, but frankly you’re unlikely to notice that much of a difference in regular use. There’s a file manager now for uploading audio, MIDI and impulse response files. There are also plugins that take advantage of those files, so you can customize your cab sims or import a pre-programmed MIDI sequence for one of the synths.

The biggest enhancement, though, is the addition of a momentary option for the footswitches. That means you can load up an epic delay and activate it only while you’re holding down the switch to add emphasis to certain notes. The effect will still latch if you double tap the footswitch, so you’re not even sacrificing functionality, just making it slightly less convenient.

The Dwarf is supposed to allow you to build pedalboards directly on the device. Unfortunately, that feature wasn’t ready for testing yet. This would be a huge step for the platform. Having to be connected to a computer to customize your effects chain is a bit cumbersome and means that I’m inclined to just leave the Dwarf on my desk, rather than actually put it on my pedalboard.

That this potentially gamechaning feature for the Mod family isn’t ready yet is a huge disappointment. Because otherwise, the core of the Dwarf doesn’t feel dramatically improved from the Duo X. There are some more plugins and some of the cab and amp simulations seem slightly better, but nothing here turns the Mod platform from an interesting idea with a lot of promise into a must have studio tool.

Even the internal CV (control voltage) functionality, which was pretty messy when I reviewed the Duo X last summer hasn’t seen much improvement. You can control almost anything using CV, but it still requires menu diving and isn’t particularly intuitive. And the number of modules built specifically for CV is limited unless you’re willing to wander into the beta section of the plugin store. To be fair, if you’re using a Mod Duo, Duo X or Dwarf, you’re probably not afraid of experimental software. Honestly, the whole thing feels like one big beta test at times. And it’s worth noting that some of them don’t even have UIs yet (as indicated by their Altoid tin-like icons).

It’s these sorts of inconsistencies and lack of software polish that continues to be the Mod platform’s Achilles Heel. Whether it’s in the UI (or lack thereof), or the volume difference between various plugins, or the CV implementation. While the hardware is undeniably excellent, the software feels undercooked.

I don’t want it to sound like I’m down on the Mod Dwarf. Because I’m not. It’s just that, if you’re impatient, easily frustrated and not interested in experimenting, it might not be for you. But everything I liked about the Duo X still holds true here.

The core sound engine is the same. Open Source LV2 plugins running on a lightweight version of Linux handle everything from amp emulations, to effects to sound generation. There are a handful of solid synth modules, like TAL Noise Maker and Dexed, but also a lot of SoundFont players that are really only useful if you’re into scoring 16-bit style video games.

Chances are, though, with the Dwarf’s pedalboard-friendly formfactor, you’re probably not going to be using the synth sounds that much. Instead, it seems best for creating complex one-off effects chains that you can then bounce between. While you can turn effects on and off individually, and the multiple pages of controls give you plenty of options, I still found it cumbersome to have more than two virtual devices directly accessible. You have to change pages to bring up the additional pedal controls, which means multiple foot taps, and that’s not really ideal while jamming or performing live.

The standout plugins here are largely the same as last time. The super fuzzy digital drives like Infamous’ Hip2B and Paranoia are perfect for getting the harsh clipped sounds of ‘90s industrial. And the reverbs can get really spacey and weird. The Shiroverb, for example, is a solid shimmer reverb that can go from subtle icy textures to cartoon cascades of sparkles. There are a few plugins, though, like the Granulator and even Hip2B that, while great sounding have seemingly limited sweetspots.

The one surprise here is how much happier I was with the amp and cab simulations this time around. They’re still something of a mixed bag, but I had an easier time finding tones I liked. I was especially fond of GxAmplifier-X, which lets you customize your amp sim to an almost absurd degree. You can start with a tone stack based on a Fender Bassman, for example, then swap the usual 12ax7 tubes for something else (say some 6V6s) and see what it would sound like pumped through a 1x12 cabinet instead of four 10-inch speakers.

Note: The demos below were recorded with the Mod Duo X. But since the plugins and core platform are the same, the sound should be almost identical to the Mod Dwarf.

Now, it’s entirely possible that the sims haven’t improved at all and I’ve just gotten better at dialing in a pleasing sound. But I’m still gonna give Mod Devices and Guitarix some credit here.

One last plugin I want to shout out is WOV from K-Devices. I love tremolo and this is one of the most flexible trem effects I’ve seen. Its controls aren’t really suited to the limited number of knobs and footswitches on the Dwarf, but you can dial in some really fun sounds and then use the Dwarf’s CV controls to manipulate them while you play.

Seeing as how the software side of the Dwarf isn’t finalized yet, I’m not comfortable calling this a review and slapping a score on it. That feels a bit too conclusive for something that is still in beta. Even the hardware is still not 100-percent final. The pedal itself is locked in stone (to my knowledge), but the power adapter will likely be changing. The one that shipped with my unit was unbearably noisy.

That being said, my general impressions of the Dwarf are the same as they were of the Duo X. This is a platform with a lot of potential, but also a lot of rough edges. The smaller, more guitar oriented format will make the Dwarf more attractive to some. And once the onboard patching features launch it’ll definitely be an easier sell. But the price will continue to be a barrier.