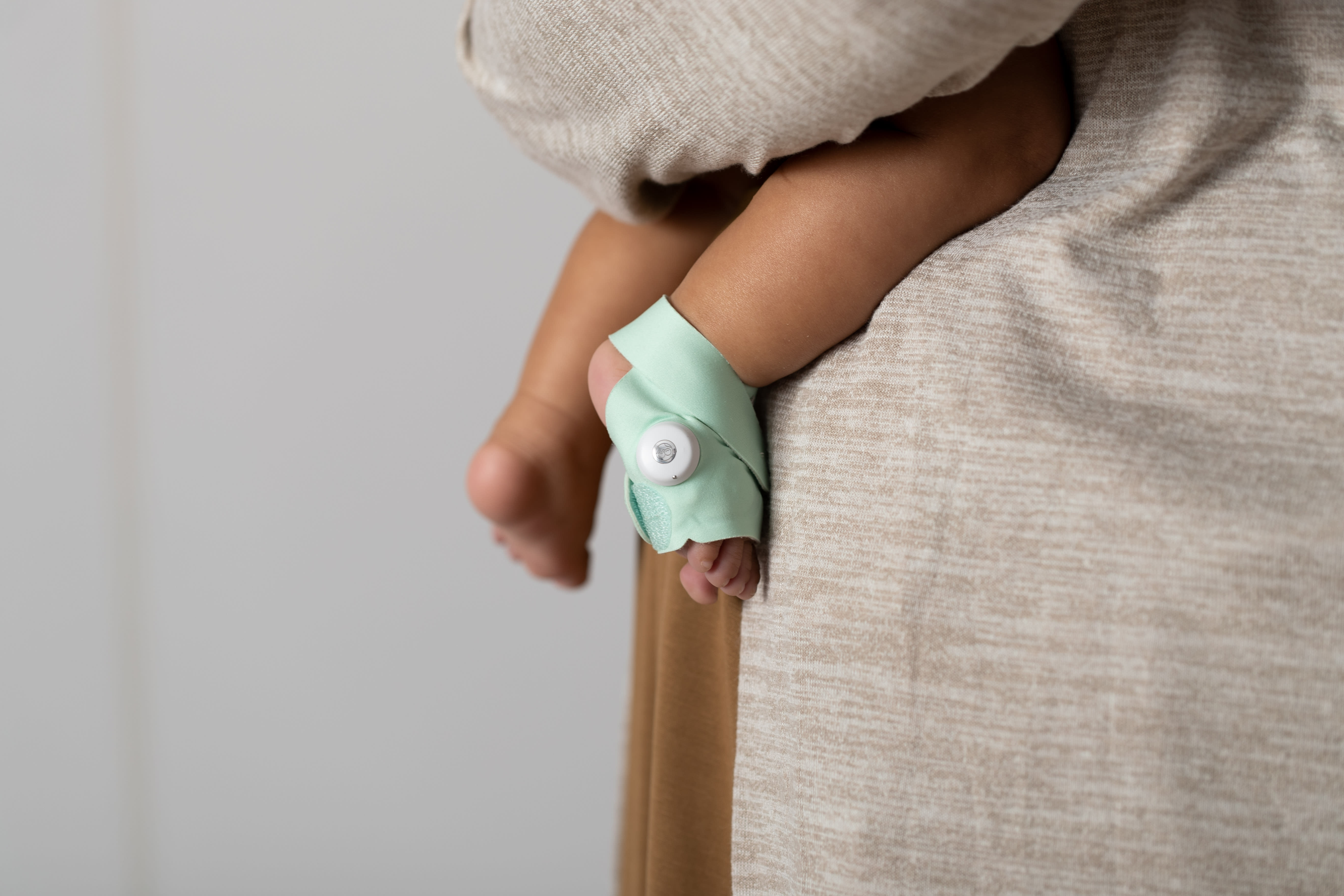 The company's latest infant monitor brings plenty of thoughtful improvements, but it's still not perfect.

My twins spent a little over 100 days in the NICU after they were born. One of the many things I became accustomed to when I visited was flicking my eyes to their monitors whenever the noises changed tone or frequency. “Beep beep booooonk” was someone’s pulse ox dipping below 90 percent. A frantic “beepbeepbeep” meant tachycardia or bradycardia. And an oddly melodic “beeeeep beep beeeeep beep” meant the humidifier tubes that led to their isolettes weren’t condensing correctly.

We definitely needed a product to continue that monitoring once we got home, and Owlet is one of the few companies that provides a wearable version for babies. Most other companies that offer infant monitoring, like Nanit and Pamper’s Lumi, make cameras that include some kind of a wearable device. Based on its features and the recommendations from my NICU parents group, I started using the second-generation Owlet sock earlier this year when the twins were released from the NICU. I’ve been happy with it overall; I really like being able to check on my babies without having to walk upstairs and I rely on it to provide peace of mind when say, my kids insist on rolling onto their bellies in their sleep. It’s become an indispensable tool to have on both mine and my partner’s phones.

The third-gen Owlet sock is much like its predecessors: A sensor shines light through the skin and, using the light that shines back, it then estimates the baby’s blood flow and oxygen level. The Owlet sensor fits inside a fabric “sock” that pairs to a WiFi connected base station, and the base station updates an app on your phone with readings. The wearable monitor uses a handful of color-coded alerts to update parents on their babies. Green means reading data; blue is low battery; white is charging; and orange is disconnected. Red means a dip in heart rate or pulse ox, which triggers an insistent alarm as well to clearly signify potential distress. The new Owlet model features a redesigned fabric sock, a smaller base station and wireless charging. These hardware upgrades are, for the most part, thoughtful and useful, with the exception of a few snags.

Let’s start with the sensor (one of the thoughtful bits). What had been a flat circular shape with a micro-USB dongle for charging is now a thicker, dongle-less, button which sits in a butterfly-shaped fabric base. The sensor is secured into place by fitting it through a hole in the sock, and then anchored using velcro. This makes it much easier to switch the sensor in and out of the four included socks. Of the two left-and-right pairs, one for children under 12 pounds and one for those over 12 pounds. (This is also an update from the second-gen, which included three sizes of one sock which could work on either foot.)

The sock is wrapped around the ball of the foot and secured behind the ankle with velcro straps like a tiny sports band. The sensor is located more on the side of the foot now, with the velcro underneath the foot. Owlet says many of these changes come from feedback from parents, but I found them problematic in practice. It is comically difficult to get the sock properly secured on a wriggling infant, but I generally managed okay with the second-gen model.

With the changes to the third-gen sock, I not only found it harder to properly align the sensor, but it was also too easy for my kids to slip the socks off. This had occurred randomly once or twice with the previous version, but with the new one it happened five times between the twins in a matter of a week. The way the sensor and velcro are located makes them easy to snag and rub. I also found it harder to get the sock set smoothly on the foot which in turn made it more difficult to properly secure both the ankle strap and the sensor. I referenced the Owlet manual and instructions for tips on how to do this better, but the ankle strap kept slipping off my son and the whole sock slipped off my daughter multiple times.

Because I couldn’t quite get the socks to lie flat, it was harder to figure out how to correct the fit when I got an orange “difficulty getting reading” alert. These orange ‘disconnected’ alerts are absolutely my least favorite part of the Owlet system. When a sock alerts, it rings both your phone and the base station with notifications (and by playing “Hush little baby” with a flashing orange light).

I got a some scary red alerts with the latest socks, which are every bit as alarming as they should be. However, during the “Low oxygen/low heart rate” red alerts my babies looked totally fine. I checked the guides in Owlet’s app which told me that, among other things, a disconnected sock could result in a partial reading, hence a red alert. This made the iffy fit on the socks all the more problematic (I did not enjoy leaping out of bed in the middle of the night for a red alert that was due to a misalligned sock). There are several other factors (elevation, circulation, periodic breathing) that could contribute to red alerts, and Owlet provides a guide on what to do if you receive one. I wound up talking to our pediatrician, who confirmed that I’d likely be able to easily identify a real emergency issue versus an error alert.

All told, I saw many more orange disconnection alerts. They occurred when my kids slipped out of their socks, but also sometimes for unknown reasons. This was particularly unwelcome in the middle of the night, when I didn’t want to risk waking sleeping babies with alert noises or sock readjustments. The second-gen sock at least had a way to minimize the sounds for these notifications, but this option is missing in the new version. This is the main challenge with the Owlet system: A baby can shift the sock enough to trigger an alert. Yes, it’s important to know when the sensor isn’t correctly seated, but I wish it didn’t happen so often. I also wish I better understood what activities and behavior caused the alerts when the sock seemed correctly fitted.

I appreciated the other hardware changes a lot more. The new base station is almost half the size of the old base station, which makes it easier to fit on a nightstand. It’s significantly less bright than its predecessor, which makes it a lot less obtrusive in the middle of the night (something that really aggravated my colleague Daniel Cooper in his original hands-on).

Upgrading the socks to wireless charging feels like a genius move. This makes the device easier to put in a variety of places, with one less cable to keep track of. Owlet says the redesigned sock can grab an eight-hour charge in 20 minutes, and a full charge in an hour and a half. Unlike the second-gen model, the battery life here is measured in hours instead of a percentage, which was helpful but I seemed to get low battery warnings a lot earlier. Four hours of battery left doesn’t seem worthy of an alert, if you ask me.

A few other notes: It was nice to see that the new socks automatically turn on the base station once your kid is wearing the sock; the old ones required you to manually turn on the station with a tap. If the socks get pushed off the base station while charging, it will trigger an orange disconnection alert. Though Owlet only connects to 2.4GHz WiFi, it will stay connected in the event of a WiFi disruption. While staying in a hotel during a recent wildfire evacuation, I had no luck trying to connect the second-gen socks, but they immediately reconnected to my home WiFi when we returned.

As with the hardware, the software changes here feel well thought-out. Owlet replaced its physical manual with an app download, and the GIFs and videos included in the app were actually pretty helpful. Installation was straightforward for both versions, though there was always a step I had to attempt more than once. With the old version it was getting the WiFi connected; with the newer one it was registering a new device and assigning it to a child.

For some reason the app had me add the sock, then assign it — but I had to create a new profile instead of the one that I had created for the second-gen setup. Then I had to re-register the same device again under the child’s profile. None of this was particularly onerous, but it seemed unintuitive to register each gadget twice. And, while it’s nice that the app has an easy way to add multiple children and monitors, I now have four entries in the app: one for each child and each device. That’s a little cluttered, and I wish I was allowed to rearrange the cards or tiles here. However, I did appreciate how the app on my partner’s phone automatically updated after I added the new socks.

Once installation is complete, all the information is available by tapping that child’s name/picture from the home screen. Your child’s data will refresh as updates are received from the sock. When your child moves it will show feet and say “wiggling,” though the updated sock now features “work through motion,” allowing the sensor to continue taking readings “during activity such as diaper changes, burping or nose cleanouts.” The previous sock would pause readings during these movements. You can also toggle the base station on or off from here, something I’ve found useful when trying to turn off those orange ‘disconnected’ alerts I mentioned earlier.

Owlet includes the child’s name on alert notifications in the app so you can tell whose sock needs your attention when an alert pops up. But there’s no such information in the notifications that appear on the app lock screen, so you have to open the app to find out which child’s sock is setting off the alarm. Because I’m on a satellite internet connection, that increases the time to find out what’s going on during red alerts. The app also measures sleep trends, which was informative to have on hand as I try to move the twins into cribs. Another nice touch: The information about babies on the ‘Guide’ page took prematurity into account and there’s also a corresponding NICU-stay option in the profile setup.

Despite my irritation with the orange alerts in general, I really like my Owlet socks. They provide me with helpful information and peace of mind, which counts for a lot. I also generally appreciate the changes that have been made to the third-gen device, with the new sock design being an important outlier. The wireless charging, ‘work through motion’, sensor redesign and app changes are all features that make the system give faster and more accurate readings in the day-to-day. If you’re able to tolerate the disconnection alerts, and have the patience to strap a sensor onto a baby, the Owlet is a solid system to have for NICU, new or nerd parents alike.

All products recommended by Engadget are selected by our editorial team, independent of our parent company. Some of our stories include affiliate links. If you buy something through one of these links, we may earn an affiliate commission. All prices are correct at the time of publishing.
View All Comments
Owlet's new baby smart sock is finicky yet adorable (like my twins)