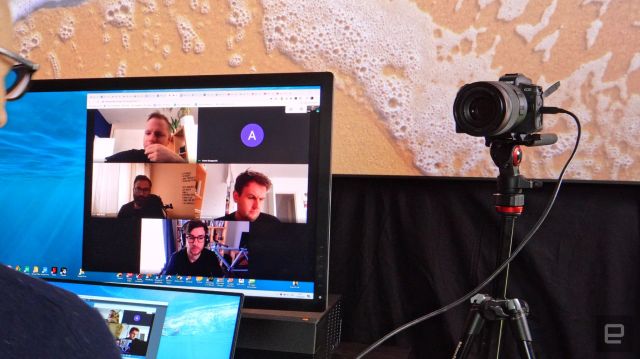 Webcams tend not to have the sharpest picture quality, so in some instances, it might be a better idea to use your DSLR, mirrorless or compact camera instead. However, most computers aren’t equipped to interpret the video signal coming from a camera’s USB or HDMI output. Panasonic is joining Canon and Fujifilm in releasing software that will do just that, without the need for a video capture device. Lumix Tether for Streaming enables webcam functionality for the popular GH5 and GH5S -- as well as the G9 and S1 series -- via USB.

The app is based on the same software that lets photographers monitor and preview their shoots on a laptop or desktop, but removes graphical elements so your friends or coworkers only see what the camera sees -- no focus points, zebra lines or menus. However, it’s still in beta, so you shouldn’t expect to get any technical support from Panasonic at this point. It’s also only available for Windows, so Mac users will have to stick with their built-in FaceTime cameras.

Using your digital camera as a webcam does come with some downsides. It can be difficult to sync audio and video, for example. But if you can make it work, your bokeh-filled background and sharper image quality could help you stand out on your next Zoom meeting.

In this article: panasonic, cameras, dslr, mirrorless, webcam, zoom, video conferencing, photography, news, gear
All products recommended by Engadget are selected by our editorial team, independent of our parent company. Some of our stories include affiliate links. If you buy something through one of these links, we may earn an affiliate commission.