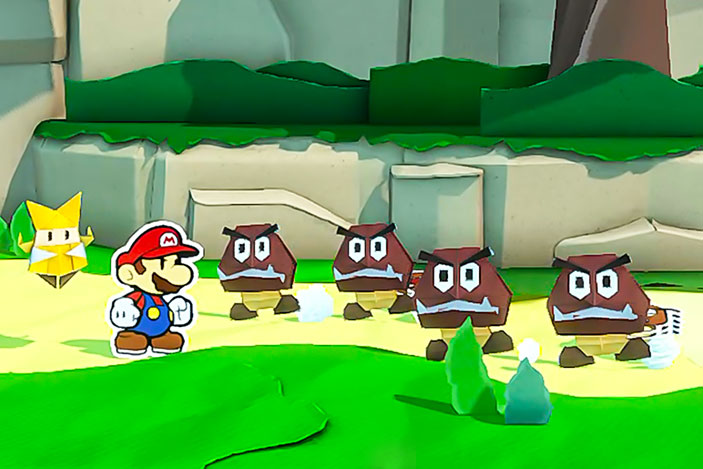 Paper Mario: The Origami King is quietly terrifying. Its story involves threats of grievous torture, a megalomaniacal dictator bent on ruination, and the murder of the soul. Thankfully though, everything and every character in the game is made out of paper, which makes all of this charming, rather than frightful. Classic Nintendo.

Paper Mario: The Origami King hits the Switch on July 17th. Until then, take a peek at 10 minutes of gameplay from the title’s early stages, including some of the position-based battle mechanics.

The Origami King is an RPG with large worlds to explore, and among the coin-collecting and puzzle-solving, battles commonly take place in an arena of concentric rings. Mario stands in the center while players rotate and slide the rings in order to line up the enemies for the most powerful attack. There’s a set number of ring moves players can make and a timer ticking down the entire strategizing session.

This is the sixth main entry in the Paper Mario series, and it offers a truly adorable update on the art style of 2016’s Paper Mario: Color Splash, which came out for the Wii U. In a 3D world, Mario and his pals appear as paper-thin, sticker-like cut-outs. Meanwhile, King Olly and his Folded Soldier army — the antagonists this time around — are puffed-up origami creatures.

Yes, they’re on a mission to fold and smush Mario’s body into an unnatural form while emptying his mind of all autonomous thought, but they sure are cute.

In this article: Switch, Paper Mario The Origami King, nintendo switch, Preview, paper mario, video, gaming
All products recommended by Engadget are selected by our editorial team, independent of our parent company. Some of our stories include affiliate links. If you buy something through one of these links, we may earn an affiliate commission.