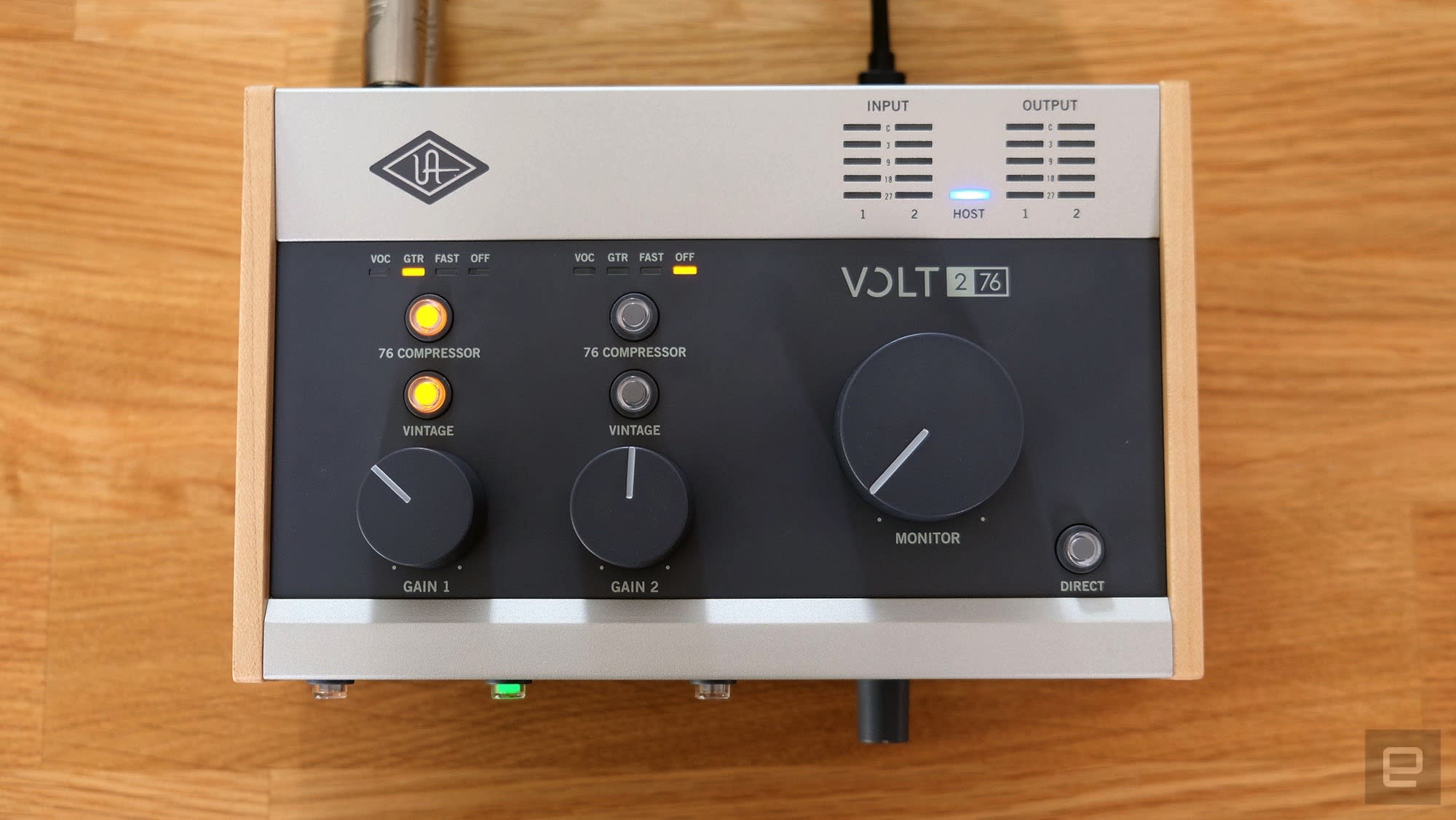 The 21st century gave rise to the bedroom producer. And in 2020 the music industry finally acknowledged that songs recorded in someone’s bedroom were just as viable as those captured in a studio filled with millions of dollars worth of equipment. This has, of course, led many of those high-end studio equipment makers to try and get in on the home studio game.

The latest to make the leap is Universal Audio. They’re a brand with over 60 years of experience, whose gear has been used to record some of the most iconic albums of all time. But, until recently the most affordable interface the company made was the $699 Apollo Solo – hardly the sort of money a beginner or casual hobbyist is gonna drop. The Volt series, however, ditches the company’s expensive DSP chips and focuses on delivering the basics with a few unique twists. The result is a collection of affordable audio interfaces that should be on the shortlist for any home studio setup.

The Volt lineup includes five models from the $139 single-input Volt 1, all the way up to the $369 four-input Volt 476. Some of the features are different and the number of ins and outs varies from model to model, but they share the same core including 24-bit/192 kHz audio converters and preamps with a “Vintage” mode that attempts to recreate the sound of a classic UA 610 tube preamp.

I tested two midrange models: the $189 Volt 2 and $299 Volt 276. These are both two-input interfaces. What separates the “76” versions from the base models are some ergonomic and design tweaks, and the inclusion of a built-in compressor modeled on the company’s iconic 1176 limiting amplifier.

Before you even start contemplating the compressor, though, the difference between the Volt 2 and 276 is immediately obvious. The 2 is simple and utilitarian. It looks like most other interfaces in the sub $200 range. There’s a pair of combination TRS / XLR inputs on the front, along with knobs to control the gain of each channel There’s buttons to turn on 48v phantom power for using condenser mics, Vintage mode, and for switching between line level and instrument level signals. Lastly, there’s a monitor volume knob, headphone jack and a button for turning on and off direct monitoring.

Around back are MIDI in and out ports (something notably absent from the company’s higher-end Apollo interfaces), balanced outs for connecting studio monitors, a USB-C port, a 5V power jack (necessary when using it with an iPad or other mobile device) and, somewhat strangely, an on and off switch.

The rest of the Volt 2 is a plain box. On the plus side, if you have limited desk space you can stick the Volt 2 in tight spots or rest things on top of it, and still have access to all the controls. On the downside, it can feel cramped, especially when you’re trying to monitor your input levels. There are two tiny LEDs next to each input that light up to warn you when you’re about to start clipping.

The 276, on the other hand, is handsome and spacious. But you’re going to need extra desk space since most of the controls are on the top. On the top right you’ll find large five-segment LEDs for checking your levels. The gain knob and monitor level knob on top are also much bigger, which makes it easier to dial things in.

In addition, the whole thing just has a lot more style. The metering LEDs are on a slight angle to make them easier to see, and the sides are a lovely wood. Are those aesthetic flourishes and conveniences alone worth the extra $100? Honestly, they might be.

Once you factor in the compressor, I think the choice between the two here is obvious, as long as your budget can handle it. The Volt 2 (and by extension the Volt 1) are reasonably priced, perfectly serviceable audio interfaces. But they don’t necessarily stand out from the crowd. Focusrite’s Scarlett series is well established, competitively priced and shares a lot of the same features. The third-generation Scarlett 2i2 is $170 ($20 less than the Volt 2), shares all of the same connectivity options and has “Air” mode, which is comparable to UA’s Vintage.

Most importantly, though, you’d be hard pressed to tell the difference between the two if your goal is to capture the clean audio. With Air and Vintage turned off and the gain on the preamps set to lower levels, both interfaces produce crisp and clear results. Are there differences? Sure. But they’re extremely subtle. I wouldn’t be able to separate a Volt, from a Scarlett, from an Arturia Minifuse in blind taste test. And I doubt the target audience of hobbyists and beginners would be able to either.

(If you want to get really nerdy about the signal-to-noise ratio and noise floor and frequency response, I highly recommend Julian Krause’s YouTube channel.)

Latency among all of these is pretty similar too. I gathered the interfaces I had lying around – the Volt 2, Volt 276, Focusrite Scarlett 2i4 second-gen, and Arturia MiniFuse 2 – and plugged them into my MacBook Pro (2019, quad-core Core i7 CPU, 16GB of RAM) and Dell XPS 15 (2019, quad-core Core i7 processor, 32GB of RAM), set the sample rate to 44,100Hz and buffer size to 128 samples and measured total latency in Ableton Live 11. All four interfaces delivered the same exact latency of 12.2ms on the Mac. On the Dell, both Volts came in at just 8.89ms, the MiniFuse at 9.89ms and the Scarlett brought up the rear at 12.9ms. While lower latency is obviously better, none of those numbers are particularly alarming.

That difference starts to show up a bit more when you crank the gain and push the preamps on these interfaces. I plugged my Fender Toronado with Atomic humbuckers directly into the Volt 2, Volt 276, 2i4 and MiniFuse. I cranked the preamp gain on each all the way up and fed them into a basic clean amp simulator in Ableton. Here the differences are a little more obvious, but they’re not that dramatic – at least until you turn on the 276’s compressor.

The MiniFuse at full gain is a tad brittle and sounds like a full-on fuzz pedal. The Scarlett has a touch more bottom end and slightly scooped mids, but is still plenty aggressive. While the Volt 2 is a touch thinner at the bottom end and puts more focus on the mids and highs. The compressor on the 276 makes a huge difference here, though. It softens the edges a bit and tames some of the harsher frequencies. It’s worth noting that all of these sound pretty harsh at the higher frequencies with the gain turned all the way up. Then again, it’s unlikely that anyone will be cranking these preamps to max on a regular basis.

Unfortunately, I did not have an SSL2+ on hand to test, which would have been the better comparison for the Volt 276.

The compressor on the 176, 276 and 476 are really what separate the Volt line from the pack. Both Vintage mode and the 76 Compressor are analog emulations, not digital recreations. But SSL and Focusrite have something similar to Vintage in 4K and Air. Essentially, they boost high frequencies while adding saturation. The 76 Compressor, though, is completely unique in this price range at least.

Now, if you record anything using the builtin compressor it’s obviously printed to the audio permanently. So, if you want to retain the most flexibility in your recordings for tweaking in DAW later, you’ll leave Vintage Mode and the 76 Compressor off. But if you just want to capture the best recording possible from moment one and leave less work for your plugins to do later, never turn Vintage off and use that compressor generously.

Vintage mode delivers relatively subtle changes in tone. I rarely plug directly into my interface, and instead run through a Tascam Portastudio 424 as a mixer first because I love the sound of the preamps. Still, I found myself leaving Vintage mode on all the time. It added a different flavor of analog warmth than the Portastudio and I liked the way the two things complemented each other.

The 76 Compressor, on the other hand, is not particularly subtle. It makes an obvious and dramatic difference to your sound. I would not leave it on all the time. But if I were recording directly to the interface, I’d probably leave it on most of the time. The main issue is that you can’t dial in any specifics. The compressor has three presets: vocals, guitar and fast, and you simply switch between them by pressing a button. For recording vocals – especially something spoken like a podcast or voice over – the 76 Compressor is incredible. I would absolutely use it on voice no matter what. Fast mode is excellent on drums… or at least drum machines. I don’t have an actual drum set in my home to test it with.

One other thing you can’t really dial in is direct monitoring. Being able to hear raw audio as it’s coming into the interface is essential, but other devices like the MiniFuse and the Scarlett let you manually set the balance between direct monitoring and audio from the PC. On the Volt, it’s simply on or off. If you press the direct button input one and two get panned hard left and right, press it again and they’re both summed to mono. And that’s it. If the direct input is too loud, you either need to change the gain on the preamp or turn up the volume in your DAW.

One last thing to mention is the software bundle that comes with the Volt. It’s not bad, but frankly there are better ones. The big coup here is Melodyne Essentials, a $99 app that lets you correct pitch and timing of recordings, sort of like Autotune. Relab LX480 Essentials reverb is another standout that recreates Lexicon’s famous digital 480L reverb from the ‘80s. The other inclusions are enough to get you making music, but don’t bring anything special to the table. The Softube amp sim and Ableton’s Live 11 Lite are often included with other interfaces as well, and the LABS instruments are free and can be downloaded by anyone.

Universal Audio’s first serious foray into the budget interface world is definitely a success. The Volt 1 and 2 don’t necessarily separate themselves from the pack, but they’re still excellent audio interfaces at reasonable prices. The Volt 176, 276 and 476, however, bring something special to the table – an all-analog emulation of one of the most iconic compressors of all time. They also have a stylish and ergonomic design that many other interfaces in this pricepoint can’t match.

My trusty Scarlett 2i4 gets the job done and I don’t feel any particular urgency to replace it. But I can tell you that if I had to go out and buy a new interface today, I would probably pick up the Volt 476.

All products recommended by Engadget are selected by our editorial team, independent of our parent company. Some of our stories include affiliate links. If you buy something through one of these links, we may earn an affiliate commission. All prices are correct at the time of publishing.
View All Comments
Universal Audio Volt review: Pro audio power at bedroom producer prices