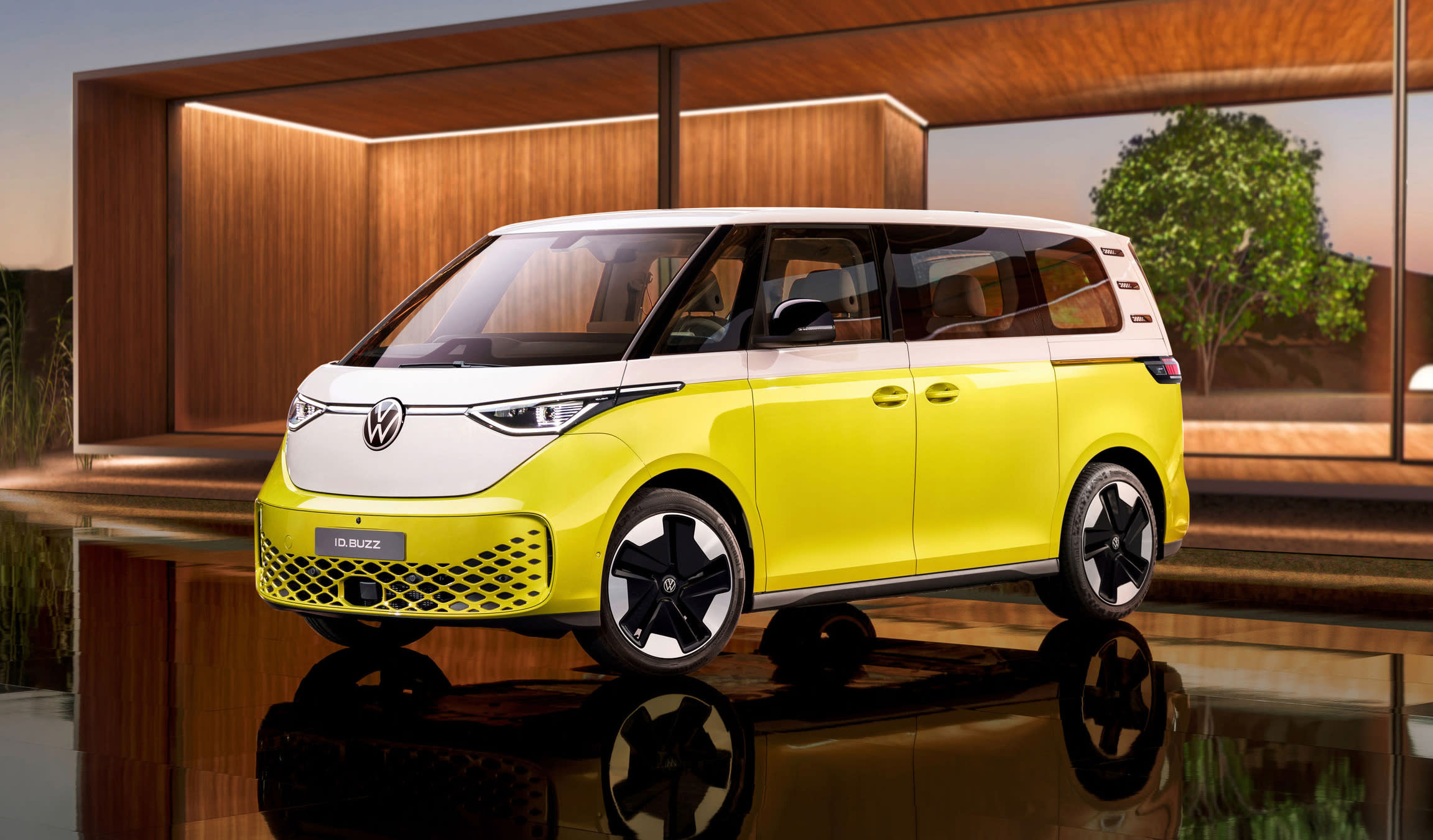 The Microbus is back, baby! Nearly 75 years since the first Volkswagen Type 2 rolled off its assembly line and into the annals of Americana as an icon of 1960s counterculture, VW is re-releasing the emblematic vehicle — this time as a full EV.

VW executives took to the livestreaming stage on Wednesday ahead of SXSW 2022’s kickoff to debut the ID.Buzz, which will be available as both a people mover and a cargo van (dubbed the ID.Buzz Cargo) beginning this year. The ID.Buzz will appear in Europe first — arriving later in 2022 — and will be available with a number of options their American-market cousins will lack, including short-wheelbase and commercial-grade variants. There’s even a Level 4 self-driving version that will begin its Shared Riding Model pilot program in Hamburg in 2025. The American iterations will debut in 2023, Scott Keogh, CEO of VW America promised during the stream, and are slated to arrive in American showrooms in 2024.

Volkswagen only had the European model to show off Wednesday, but Keogh noted that the US version would be "more stylized for the American marketplace" but has "no doubt that it will be worth the wait," while teasing a California camper edition. The US version will have a slightly longer wheelbase and offer three rows of seating to the European version's two. With its comparatively shorter wheelbase, the European model's turning radius is a scant 11 meters, on par with the Ioniq 5 or the VW Golf.

The ID.Buzz is built atop VW’s modular electric drive matrix (MEB if you say it in German), and is actually the largest model to date developed for the platform. MEB is the same base Ford plans to use for one of its European market vehicles in 2023.

The ID.buzz will come equipped with a 77-kWh battery pack (slightly smaller than the 82kWh pack in the ID.4, which is also MEB-based) with a 170 kw charging capacity powering a 150 kw rear motor. It will be capable of bidirectional charging, at least in the European model, enabling V2H (vehicle-to-home) energy transfers.

The passenger model will seat five with 1.21 cubic meters (39.5 cubic feet) of cargo space while the Cargo will offer 3.9 cubic meters (137.7 cubic feet) by replacing the rear seats with a partition behind the front row. For the interior, VW designers took inspiration from the aesthetics of the Microbus, pulling style elements from the T1 generation of vehicle and matching seat cushions, dash panels and the door trim to the vehicle’s exterior paint color of which buyers will have their pick of seven solid-color options and four two-tone schemes (white + another color).

The European version showcased a number of impressive autonomous driving features including Active Lane-Change Assist and Park Assist Plus as well as V2X data sharing, meaning the ID.Buzz can share road hazard information with both the enabled vehicles around it and the surrounding traffic infrastructure. OTA updates will be standard on the Buzz as well.

The Cargo version will offer a number of customizable aspects including the choice between bench and bucket seats, as well as a tailgate vs twin swing-out rear doors vs double sliding side doors. Furthermore, VW will be offering a number of conversion options for the Buzz, which should allow service providers of all stripes to customize the vehicle to their specific needs. In terms of carrying capacity, the Cargo can haul up to 600 kg of stuff inside with another 100 kg of gear affixed to its roof.

VW also noted during the presentation the extensive work it put into lessening environmental impacts arising from the ID.Buzz’s production. The interior upholstery is made completely animal-free — the steering wheel may be made of polyurethane, but VW executives swear that it has the same look and feel as leather. The seat covers, floor coverings and headliner are all similarly composed of recycled goods like marine plastic and old water bottles. Using these materials emits 32 percent less carbon than similar products would, according to the company. Overall, VW hopes to ​​cut its carbon emissions in Europe by 40 percent by 2030 and achieve climate neutrality as part of its Way to Zero plan by 2050.