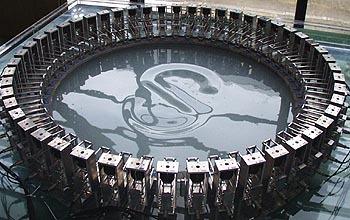 Liquid-based displays are nothing new -- in a vertical orientation, at least -- but apparently it's a lot more difficult to coax a standing pool of water into forming recognizable shapes and characters. In fact, before coming up with their current design, researchers at Japan's Akishima Laboratories were only able to get poorly-formed letters to pop up once every 15 minutes in their first stab at using waves to "print" on the surface of a specially-built pool. Their second attempt, however -- developed with Professor Shigeru Naito of Osaka University -- addresses both major flaws by using formulas known as Bessel functions to cut the processing time down to between 15 and 30 seconds and form characters with straight lines. The 30-centimeter deep, kiddie pool-sized device employs 50 generators operating in unison to produce cylindrical waves that behave like pixels, giving it the ability to display the entire roman alphabet as well as a number of kanji characters. Eventually this technology could be combined with music and lighting effects to create multimedia attractions at hotels or theme parks, but until they can speed up the letter formation even more (and maybe toss in some video), we don't see any real practical applications here. Readers?

[Via Pink Tentacle]
In this article: akishima laboratories, AkishimaLaboratories, bessel functions, BesselFunctions, displays, japan, kiddie pools, KiddiePools, osaka university, OsakaUniversity, shigeru naito, ShigeruNaito, wave generators, WaveGenerators
All products recommended by Engadget are selected by our editorial team, independent of our parent company. Some of our stories include affiliate links. If you buy something through one of these links, we may earn an affiliate commission.
Share
Tweet
Share