Connexion by Boeing to be free until Dec. 31 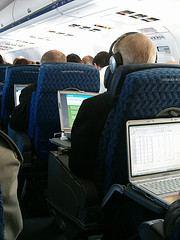 Just because Boeing decided to pull the plug on its Connexion service doesn't mean in-flight broadband has been grounded for good, with a company called ASiQ now promising to step in and fill the wireless void. ASiQ -- who recently revealed plans for allowing consumers to use their regular cellphones while flying -- has just announced an upcoming package based on an Inmarsat broadband link that will supposedly cost airlines just $5 to $15 to operate per flight (depending on the size of the aircraft) over a five year lease, meaning users should benefit from much lower fees than the typical $27 Boeing was charging for long-haul international trips. ASiQ will initially show off its attractively-priced system at Miami's World Airlines Entertainment Association conference and exhibition in mid-September, and plans to begin rolling out the commercial service sometime next year. We'll have to wait and see if the supposedly-lower infrastructure costs actually translate to cheap service for consumers, but if we can get our mid-air WiFi on for like five or ten bucks a flight, well, we can certainly envision this project really, um, "taking off."

In this article: asiq, boeing, connexion, in-flight broadband, In-flightBroadband, inmarsat, transportation, wifi, wireless
All products recommended by Engadget are selected by our editorial team, independent of our parent company. Some of our stories include affiliate links. If you buy something through one of these links, we may earn an affiliate commission.
Share
Tweet
Share