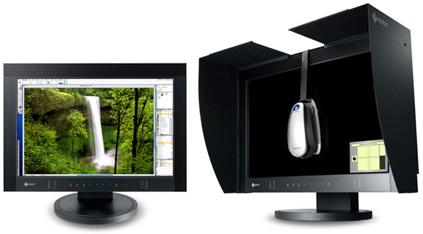 Widely known for its so-called "professional displays," EIZO has unveiled a new flagship model that touts the ability to reproduce "nearly 100 percent" of the Adobe RGB color space, among other niceties. The 22.2-inch ColorEdge CG221 sports a 1,920 x 1,200 resolution, 16:10 widescreen aspect ratio, 400:1 contrast ratio, and comes equipped with EIZO's latest 12-bit lookup table with a literal smorgasbord of color tones. The monitor can be quickly calibrated using the bundled ColorNavigator software, but leaves you the responsibility of coughing up the dough for those pricey calibration devices. While this LCD comes with every type of black level, brightness, white point, and gamma adjustment you can imagine, EIZO reportedly saves you the trouble by shipping the CG221 with pre-examined "factory settings" already in place; you'll also get EIZO's typical five year warranty and a nifty screen hood to fully "geek out" your ultra-precise display. While this eagle-eyed monitor is supposedly available right now, pricing deets aren't nearly as clear, but we're fairly certain this level of exactitude demands a pretty penny.

[Via BIOS]
In this article: CG221, EIZO, EIZO CG221, EizoCg221, pro display, pro LCD, ProDisplay, ProLcd, widescreen monitor, WidescreenMonitor
All products recommended by Engadget are selected by our editorial team, independent of our parent company. Some of our stories include affiliate links. If you buy something through one of these links, we may earn an affiliate commission.
Share
Tweet
Share