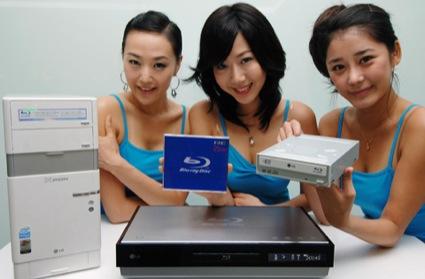 LG's been all over the place in the next gen optical disc battles. Today they bring the Blu-ray love in a big way with the introduction of BD media and three consumer level devices: The XPION x600 series PCs, the GBW-H10N Blu-ray burner we've seen before, and a mysterious living room player lacking any deets at all. LG tidied up the GBW-H10N branding by slapping on the "Super Multi Blue" moniker and dropping 'em in their new XPION X600 series desktops. LG, who apparently missed the design memo from Redmond, chose to dress the desktop in drab, and feature Intel's 64-bit, 3.4GHz dual-core Pentium D945 proc, a 320GB disk, 1GB DDR2 memory and nVIDIA's HDCP-enabled GeForce 7900GT graphics cards with 256MB of onboard memory. So yeah, no matter what those media player ISVs decide, these boxes will pump full 1080p HD vid off commercial BDs. Look out for the Super Multi Blue drive and X600 series PCs to drop first in Korea, Germany and France with their Blu-ray media and player scheduled for release sometime before the end of the year.

[Via Akihabara News]
In this article: bd, blu-ray, GBW-H10N, geforce 7900GT, Geforce7900gt, HDCP, hdtv, LG, media pc, media pcs, mediapc, mediapcs, nvidia, super multi blue, SuperMultiBlue, x600, xpion
All products recommended by Engadget are selected by our editorial team, independent of our parent company. Some of our stories include affiliate links. If you buy something through one of these links, we may earn an affiliate commission.
Share
Tweet
Share