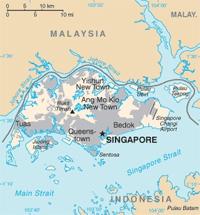 From the sound of things it would seem the island nation of Singapore will soon be the latest country to get the 802.11 treatment, having all of its near 700 square kilometers blanketed in WiFi. That would make Singapore the third nation that we know of to completely covered, joining Mauritius and Macedonia, with Estonia not far behind. A government report, "Intelligent Nation 2015," already notes that Singapore currently averages one WiFi hotspot for every square kilometer, so combined with upcoming WiMax technology, Singapore is aiming to be one ginormous hotspot by the end of the year. That's a pretty ambitious project, mind you, even for a country as well off as Singapore. Of course, this report also states (no joke), that they'll have 4G cell phones, "Fibre to the Home," the "Semantic World Wide Web," and "Embedded and Wearable Computers" by 2015, which by our estimation would make them among the most advanced civilzations around. If they do manage any of those, we may just have to open up an Engadget Singapore bureau pretty soon since that FIOS certainly ain't getting hooked up in our cribs any time soon.

In this article: 2015, blanketed, estonia, information nation, InformationNation, macedonia, mauritius, singapore, wi-fi, wifi, wimax
All products recommended by Engadget are selected by our editorial team, independent of our parent company. Some of our stories include affiliate links. If you buy something through one of these links, we may earn an affiliate commission.
Share
Tweet
Share