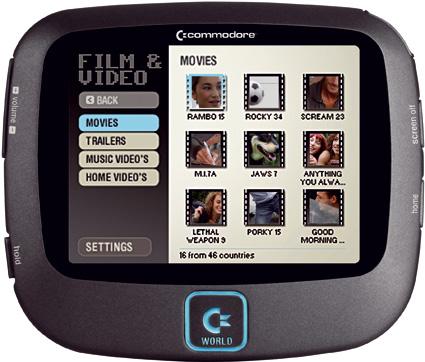 Tomorrow at IFA in Berlin, Commodore will show off its new personal media player, called the Gravel In Pocket (yeah, great name). The new personal media player sports a 2.8-inch screen, WiFi support, and plays DivX, Xvid, WMV, MP3, WAV files. It's got 1GB (or optionally 2GB) of internal flash storage, but also has an SD card slot. Commodore also announced its new site, CommodoreWorld, to provide content for the little Gravel, which will be available no later than November. We may have to erm, grovel, to get our hands on a Gravel sooner than that. [Warning: PDF link!]
In this article: commodore, divx, gravel, ifa, pmp, portable audio, portable video, portableaudio, portablevideo, sd, wifi
All products recommended by Engadget are selected by our editorial team, independent of our parent company. Some of our stories include affiliate links. If you buy something through one of these links, we may earn an affiliate commission.
Share
Tweet
Share