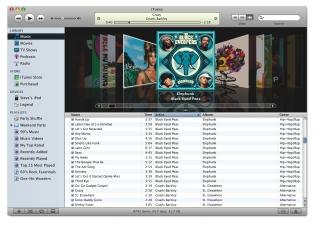 When we were deep inside Maestro Jobs' reality distortion field on Tuesday, all these new additions to iTunes 7 seemed like significant improvements over its previous version. But not quite 48 hours later, all is not quiet on the iTunes front. Specifically, users on Apple's web forums and our own tipsters are reporting that some new nanos aren't being recognized in Windows iTunes 7, music being played through iTunes 7 sounds "scratchy" at times, CoverFlow doesn't always entirely download properly, and there are allegations that iTunes 7 has become, slow, bloated, and a resource hog. Some of us here at Engadget who have installed iTunes 7 haven't noticed any bad playback or other slowdowns, but have been dissappointed that very few of the albums on our machines have successfully downloaded album art. Furthermore, The Sydney Morning Herald called iTunes 7 a "lemon" yesterday and went on to report that: "Both Mac and PC users appear to be affected by the glitches being reported, and numerous different threads on the Apple discussion forum have described a range of technical issues." Oh, and did we mention that many professionally produced podcasts -- including CNET's Buzz Oud Loud, Popular Mechanics, and our own -- are reportedly not working. If Apple doesn't do something about this pretty soon, people might start calling it iCan't -- as in: "I can't play my music anymore."

In this article: apple, bugs, ipod, itunes, itunes 7, Itunes7, lemon, nano, podcasts, portable audio, portableaudio
All products recommended by Engadget are selected by our editorial team, independent of our parent company. Some of our stories include affiliate links. If you buy something through one of these links, we may earn an affiliate commission.
Share
Tweet
Share