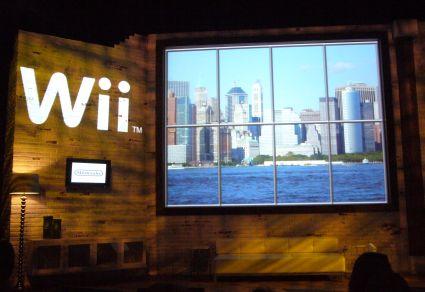 Yeah, so we already know most, if not all, of the gory details, but we're here live in New York for Nintendo's US press conference for the Wii anyway. We'll have updates on the regular, stay tuned!

9:20AM EST - Perrin Kaplan is on stage doing an introduction.

9:21AM - Reggie! He walks on, "We will reveal all the relevant information for the Wii." "Today marks our next planned step in driving this industry forward."

9:23AM - "Our strategy is based on one core belief: brining gaming back to the masses. It's literally that simple. Appealing to current gamers as well as broadening the market. Four landmarks we've brought to market. Today marks the fifth. The first, the Nintendo DS."

9:26AM - "How we changed the user interface, with two screens, voice activated microphone, changed the definition of what a video game could be. 2nd: Introduction of touch-sensitive games. Nintendogs, Brain Age. DS supplements your life instead of replacing it. Is it working? Definitely. New Super Mario Bros. exclusively for DS. Sold to 1M players in less than two weeks. What's driving growth are new players enjoying new types of games. In past four months, New Super Mario Bros. represents 35% of first party sales. Touch-generation represents 39% of sales."

9:29AM - "The Wii Remote. The reaction has been astounding. The 5th step is today. We're not just altering the interface between player and game, but in the household. Here's the hard news: Wii November 19th, worldwide debut happens right here in the Americas, same place as Nintendo DS. On Nov. 19th, avail. in 25,000 retailers in the Americas."

9:30AM - "MSRP: $249. One price, one config, one color: white. This simplicity allows us to maximize volume throughout the Americas. Our shipment goal worldwide is 4M consoles during the 43 days between launch and Dec 31. The Americas will receive the largest share, a continuous flow of units." Continued...

9:30AM - "Our focus is making the Wii available to the masses given the mass market price and the stellar collection of software. Wii in the box: console, cables, sensor bar. One Wii remote and one nunchuk controller. They're showing off more than two dozen games, some of which are significantly different than what they've shown at E3. Some are completely new. Wii Bowling, brand new game, part of Wii Sports. Pick up Wii Remote and start bowling strikes."

9:32AM - Eric Peterson is on stage demoing Wii Bowling.

9:33AM - Reggie is back. "No doubt, this reminds you of the tennis demo we did at E3. And now, Wii Boxing, as well -- all part of Wii Sports disc -- Wii Tennis, Wii Golf, Wii Baseball, Wii Bowling, Wii Boxing."

9:35AM - Wii Sports will be included with the console. "Wii not only represents best innovation, but the best value as well. We'll also offer consumers widest range of launch titles in history of video games. The list is big, new and nostalgic, unique, bringing new type of entertainment. Signature title: Legend of Zelda: Twilight Princess, and Excitetruck, both available on launch."

9:36AM - "These titles represent fantastic trio of first-party titles. There's nothing like Legend of Zelda, first time we've had a Zelda title on launch. Gives us a huge boost and momentum right out of the box. We will continue to make those big masterpiece titles for the core gamer. Because of Wii remote and nunchuk, this Zelda game plays like no other. If you played all day, you'd only scratch the surface. This is the best gotta-have-it title since Mario 64."

9:37AM - "These titles are just the tip of the iceberg." There are many third-party games as well. Call of Duty 3. Tony Hawk, Trauma Center, Madden NFL 07, Need For Speed: Carbon, Elebits, Metal Slug Anthology, Barnyard, Cards, Avatar, Blazing Angels, Far Cry: Vengeance, Red Steel, Ray Man... [This is a partial list, way too many to catch!]

9:43AM - Wii Channels - Find universal appeal for Wii. Create entry point for Wii with those nongamers. The Wii Channels menu -- all this is unique to Wii. "We believe that Wii Channels can change the interface between TV viewers, internet, and their games. When Wii is connected and in standby, user will first see unique channel menu. Contain initial page of Wii Channels, but it's expandable. The first channel is the Disc Channel or 130 Game Cube Discs. Shop channel, download the best of classic games."

9:46AM - "The Wii Classic Controller will make it feel like back in the day. Games are downloaded and stored internally, and become their own channel in the menu. What about non-players? What makes them want to get involved? That's where the other channels come in."

9:48AM - "Two new channels for non-gamers, first one is the Mii Channel. A digital 3D caricature of you, your friends, your family, anyone you want to create. Three basic ways to interact. Creation, choose a look-alike, 2nd you can start from scratch." Demoing Mii.

9:49AM - Transfer Miis to Wii Remote, take them with you. Populate your games. Wii Sports, etc.

9:54AM - Nice, the photo viewer can play video clips. "The Photo Channel"

9:55AM - Reggie: "We hope you see a few of the key tenets we have for Wii. What gaming and gaming machine represents to a mass audience. Connected to internet, there are news and weather channels. With Wii, you get them instantly. News headlines constantly via Wii Connect 24 system. There is a Wii Message Board, send messages to other Wii users, PC users, or to cellphones. Leave messages for other family members on your calendar."

9:56AM - "We want to bring Wii to the masses. With Wii Connect 24 we can deliver new games and content while you're sleeping. There's even the internet channel. You can download an Opera browser using Wii points and surf the web."

9:57AM - "The TV screen can be better than your PC screen. Put info on SD card, look at it on Wii. Navigate the web from your comfy couch. When times is important, Wii Channel system is available instantly, no bootup process. Wii Channels all about ease of use functionality for everyone in the household. We want family members to rely on Wii Channels every day."

9:59AM - To conclude, this is our mantra: satisfy current players in new ways, re-engage former players, but most importantly, grow the market with new gamers. We are intent on changing the way players connect to their games and any TV owner can connect. Five things to recap: Revolutionary Play. Best of the Past. Biggest Launch Library. Wii Channels. Affordable Price.

10:01AM - Wii Remote has MSRP of $39.99. Nunchuk attachment has MSRP of $19.99. Someone's Q: Will unit hold photos or read from card? A: Majority of storage from SD card, though the unit does have internal storage. Zelda for Game Cube launches December 11th. For Wii on November 19th.

10:03AM - Someone's Q: What is the cost of accessing internet? A: You just need a connection at home -- Wii has WiFi and Ethernet, there is no incremental cost from Nintendo.

10:05AM - Q: Any third parties going for a $59.99 price point? A: We encourage third-party to price reasonably, we want consumer friendly price points.

10:05AM - They expect to sell, not just ship, four million consoles by December 31st.

10:06AM - Q: How many titles support widescreen? A: "All first-party, most if not all, content is widescreen. In terms of graphic power, we have a different paradigm, we want to drive entertainment, ease of use. If you want power, you're going to go someplace else. Have at it. We're doing something very different. You're going to look at Zelda and say, 'Wow!'"

10:07AM - Perrin describes the Wii as a "Ferrari under the hood." "It is plenty powerful."

10:08AM - Q: Integration for DS and the Wii? A: No details now, you will hear much more about that in the future.

10:10AM - Q: Online competition? A: What's been announced in Japan is that first online multiplayer game will be a Pokemon title for Japan. Someone's Q: When will it here in the States? a: Shortly thereafter.

10:12AM - Q: Plans for in-game advertising? Branded Wii Channels? A: "In terms of first-party, something we're looking at, but our strategy is different. In-game branded content as way to make game more real, not necessarily as revenue source. Right now we don't have plans for branded channels, but that's right now. Who's to say what the future will bring." They're wrapping things up.

10:13AM - That's it, thanks for reading everybody!
In this article: features, keynote, live coverage, LiveCoverage, nintendo wii, NintendoWii
All products recommended by Engadget are selected by our editorial team, independent of our parent company. Some of our stories include affiliate links. If you buy something through one of these links, we may earn an affiliate commission.
Share
Tweet
Share