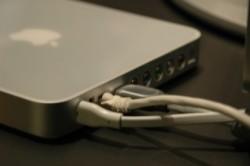 It's the stuff fanboy dreams are made of: Google and Apple, sittin' in a tree. In fact, if you nearly passed out when Stevie J. walked onto the stage the other day sans mock turtleneck, or started into hysterics when Larry Page rode into CES on the back of that SUV, you might want to sit down for this one. Google and Apple are supposedly, maybe, possibly talking up video interoperability with Google Video and Apple's forthcoming iTV device. All we've got to go on so far is a quote from Google's consumer product chief, Marissa Mayer, who has confirmed the two companies are "engaged in talks." What level of iTV integration this indicates, if any, is yet to be seen, and with the usual amount of tight-lipped action we normal get out of Apple and Google, we don't expect to know much more until the feature is upon us, but the addition of Eric Schmidt to Apple's board of directors is a good sign of things to come. Plus, we're sure good, video-ey things can happen with these two companies putting their heads together, and a bit of internet video can't hurt a device that so far doesn't look to have much more than DRM interoperability to set it apart.

In this article: apple, google, google video, GoogleVideo, hdtv, itv, rumor
All products recommended by Engadget are selected by our editorial team, independent of our parent company. Some of our stories include affiliate links. If you buy something through one of these links, we may earn an affiliate commission.
Share
Tweet
Share