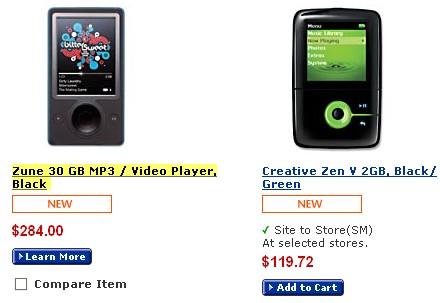 Thanks to some vigilant Wal-Mart watching by a friendly tipster, we've got a good idea as to the Zune pricetag, though we're still no closer to a specific launch date. By the time we got to the Zune's product page, the pricing info had been removed, but it can still be spotted in the MP3 player category listing at a lean $284 flat. Of course, Wal-Mart likes to skim as much as they can off the MSRP -- they're charging $147.88 for a 1GB iPod nano instead of Apple's nice round $150 figure -- but a whole $16 shy of the magic $300 number we were expecting Microsoft to hit isn't too shabby. Rumors still abound as to why we still don't have a solid figure from Microsoft on pricing. Some believe it has something to do with the "bombshell" of Apple's recent iPod price drop, so Wal-Mart potentially be off the mark with this $284 of theirs, but we'll give their soon-to-be-fired database lackey the benefit of the doubt.

[Thanks, Bernice A.]
In this article: breaking news, BreakingNews, ipod, microsoft, portable audio, portable video, portableaudio, portablevideo, price, wal-mart, zune
All products recommended by Engadget are selected by our editorial team, independent of our parent company. Some of our stories include affiliate links. If you buy something through one of these links, we may earn an affiliate commission.
Share
Tweet
Share