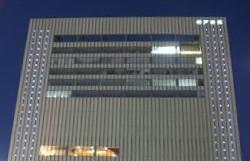 In an apparent attempt to convert the average office building into something akin to a landing strip, Takuro Osaka is hitting the public with a showing of his "cosmic art" by illuminating opposing sides of the 18-story M-INT Koba building, slated to open for business on October 4th. Osaka, a professor at the University of Tsukuba and the owner of a "light art studio," led the push to have 2,880 blue LEDs installed on the building's west side, which will glow (or not) based on the amount of cosmic radiation surrounding it at any given time. The LEDs' sensors transform "cosmic energy" into pulses of illumination, ensuring a constant light show that's, um, never consistent. Apparently there's no actual utility in the smattering of lights (besides great publicity, of course), but for Osaka, it's one step closer to getting his "enlightening" artwork to a gallery where it would really shine: outer space.

In this article: building, cosmic, cosmic radiation, CosmicRadiation, japan, LED, LED lighting, LedLighting, lighting, lighting system, LightingSystem
All products recommended by Engadget are selected by our editorial team, independent of our parent company. Some of our stories include affiliate links. If you buy something through one of these links, we may earn an affiliate commission.
Share
Tweet
Share