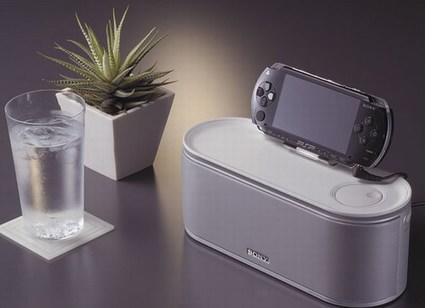 Sony PSP owners, take heart -- you've been given some fairly awful excuses for PSP sound systems in your day, while Apple's little white cash cow has gotten the pick of the litter. To remedy that imbalance, Sony itself is finally stepping up to the plate and releasing the PSP-friendly SRS-U10 speaker. Instead of modeling itself after an iPod HiFi experiment gone terribly wrong, Sony has dropped an oh-so-glamorous docking speaker station for your PSP, DAP of choice, or essentially anything with an audio output. But before you go and get too giddy, however, we should point out this impressive looking device boasts just 3.6 watts of power, although it does dock and charge your PSP whether pumping tunes or not. While further details (like when this thing will hit stores) aren't yet known, it's probably safe to assume that it'll cost substantially more than any poor (style-conscious) soul should be asked to pay -- but hey, that's Sony for ya.

[Via Akihabara News]
In this article: portable audio, portableaudio, psp, psp speaker, PspSpeaker, sony, speaker, srs-u10
All products recommended by Engadget are selected by our editorial team, independent of our parent company. Some of our stories include affiliate links. If you buy something through one of these links, we may earn an affiliate commission.
Share
Tweet
Share