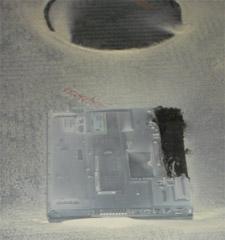 So it looks like Sony's battery fiasco will likely cause delays and high battery prices until June 2007, according to Bloomberg News, which reports that "prices for battery cells have risen about 15 percent in the past three months because of the shortage." If that wasn't bad enough, the news agency also adds that Sony has set aside ¥30 billion ($251 million) "for costs related to the August recall of batteries used in Dell and Apple computers, Sony spokesman Yoshikazu Ochiai reiterated today." However, that figure doesn't take into account the recalls by the laundry list of other companies like Fujitsu, nor Sharp, nor IBM / Lenovo, not to mention a few others. So we'll guesstimate that Sony's true cost is really somewhere around ¥40 billion (over $334 million), and that, of course doesn't include any future companies that may come out of the woodwork to point out faulty batteries they bought from Sony -- like, oh, say, Sony. That's right, Sony has also officially announced a recall of 300,000 batteries in their own devices. Yikes.

In this article: apple, batteries, breaking news, BreakingNews, delays, dell, exploding batteries, ExplodingBatteries, fujitsu, ibm, lenovo, sharp, sony, taiwan
All products recommended by Engadget are selected by our editorial team, independent of our parent company. Some of our stories include affiliate links. If you buy something through one of these links, we may earn an affiliate commission.
Share
Tweet
Share