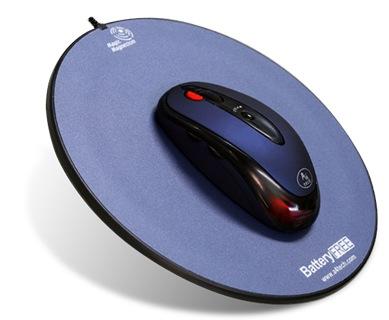 A4Tech just busted out another new mouse novelty for Royche retail in Korea. Meet the NB-57D battery-free wireless optical mouse. Yeah, battery-free as in no battery required, which solves at least one of the biggest issues with setting the mouse free, or nearly so since the USB mouse pad is a critical part of the magic. See, it all works via a process dubbed "magic magnetism," which is an apparent A4Tech cocktail of electromagnetic induction and RFID technologies bundled into the kit. The mouse delivers an 800DPI sensitivity and features 7-buttons plus a scroll-wheel which can be endlessly mapped to shortcuts via the included 2X-Office software. According to AVING, it's yours for right around 20,000 Korean Won or just about $21 -- that's a big tech bang for the buck. Just don't go wearing your fancy Bluetooth watch while mousing around that potentially volatile mouse pad, ok folks?

[Via AVING]
In this article: A4Tech, electromagnetic induction, ElectromagneticInduction, magic magnetism, MagicMagnetism, NB-57D, rfid, Royche
All products recommended by Engadget are selected by our editorial team, independent of our parent company. Some of our stories include affiliate links. If you buy something through one of these links, we may earn an affiliate commission.
Share
Tweet
Share