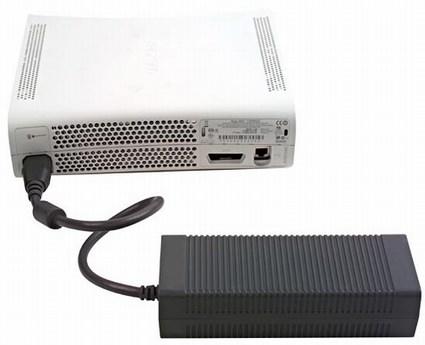 If you're not exactly down with tossing a water-cooling system into your Xbox 360, and don't want to get burned by a possibly scorching Nyko Intercooler, you should run right out and pick up Intec's Power AC Adaptor -- if you've got $100 to kill, that is. You heard right, Intec has unveiled a third-party power brick "to replace your lost or malfunctioning" one, which sports an internal cooling fan "to keep your Xbox 360 cooler during operation." It also boasts three status lights of the green, orange, and red variety, which informs you if the brick is "OK, in stand-by mode, or currently malfunctioning." Aside from having a built-in indicator for telling you just how bad things could get, the 0.85-pound device doesn't even include the wall plug to connect your newfangled power supply to an AC outlet. So even if you had the slightest inclination to save your Xbox 360 from impending overheating via this overpriced accessory, be sure your power cord isn't of the recalled variety before plugging up.

[Via Xbox 360 Fanboy]
In this article: ac adaptor, AcAdaptor, accessory, cooling, expensive, intec, intercooler, overheating, overpriced, power ac adaptor, PowerAcAdaptor, problem, recall, xbox 360, xbox360
All products recommended by Engadget are selected by our editorial team, independent of our parent company. Some of our stories include affiliate links. If you buy something through one of these links, we may earn an affiliate commission.
Share
Tweet
Share