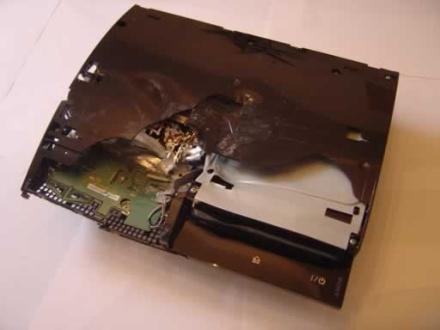 Those SmashMyPS3 crazies (or attention whores, your call), the same kids responsible for frightening Apple and Xbox fanboys the world over with their iPod and Xbox 360 smashing exploits, have gotten themselves a PS3 and done that smashing thing. Style points are to be awarded for the pimp getup, along with the sledgehammer badass who looked like he knew what he was doing. Plus extra double bonus points for making Mr. "eighteen *beelping* hours" cry at the end of the clip, garnering this video (which can be viewed after the break) its NSFW rating (for the bleeping, not the crying). It probably goes without saying that this video is also NSFFB and defiantly NSFPS3. Consider yourself warned. We're just glad to see some solidly pointless violence after all the kind-of-serious and life-threatening violence of last night, way to go guys!

In this article: ps3, smash, smashmyps3
All products recommended by Engadget are selected by our editorial team, independent of our parent company. Some of our stories include affiliate links. If you buy something through one of these links, we may earn an affiliate commission.
Share
Tweet
Share