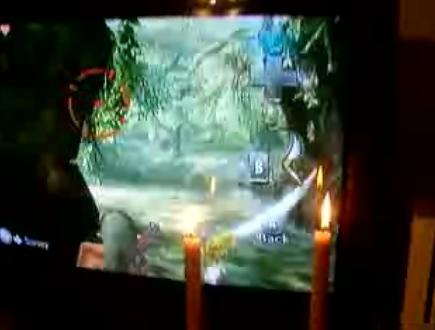 Well that was fun. Hardly a week ago we still believed in Santa Clause and that magickal properties lay within the Wii sensor bar. Now it turns out that not only was NORAD lying to us all this time, but the Wii sensor bar can be replaced by a couple of candles without throwing off our Zelda spin attack one bit. Those brave souls over at Joystiq dusted off their candelabra to give it a shot, after rumors of such doings emerged on the internets, and it appears that those rumors were not exaggerated. Of course, having a couple of candles obstructing the screen isn't quite an optimal Wii-ing situation, but it's always good to know that instead of reading a book by candlelight when the power goes out, we can just fire up our Wii and... wait. Damn. Well, it's kind of cool anyways. Peep the video after the break.

In this article: candle, hack, sensor bar, SensorBar, wii
All products recommended by Engadget are selected by our editorial team, independent of our parent company. Some of our stories include affiliate links. If you buy something through one of these links, we may earn an affiliate commission.
Share
Tweet
Share