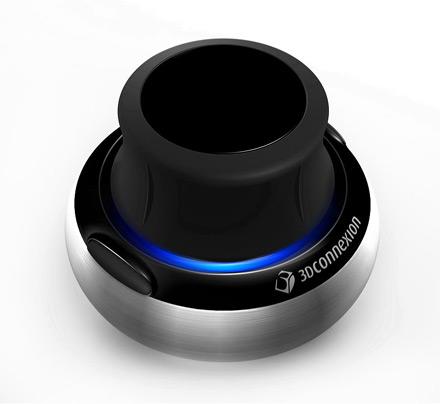 Chances are you haven't considered your options for 3D inputs unless they were specialty gaming rigs or homebrew hacks, but that's gonna change today. 3Dconnexion, a subsidiary of Logitech, launched their new SpaceNavigator, a very simple, inexpensive six-axis method for navigating virtual environments. End users will plunk down $59 (pro users pay $99 for the same device, but a commercial license) to be able to run through Google Earth and build in SketchUp like they've never before. Unfortunately, until that SDK gets taken advantage of it won't be good for much else, but the built-in Google support for the SpaceNavigator really makes using at least those two 3D apps completely different. And let's face it, you're just not going to find a 3D controller for this price on the market. It should be available immediately or in short order; Mac users can probably expect support in 2007. Click on for more shots we got when we played around with it the other day.

It's heavy, it's sensitive, it has a good feel, and it's a total steal for $60, even if the only thing your average user can do with it right now is use a few Google 3D products.
In this article: 3d, 3Dconnexion, logitech, SpaceNavigator
All products recommended by Engadget are selected by our editorial team, independent of our parent company. Some of our stories include affiliate links. If you buy something through one of these links, we may earn an affiliate commission.
Share
Tweet
Share