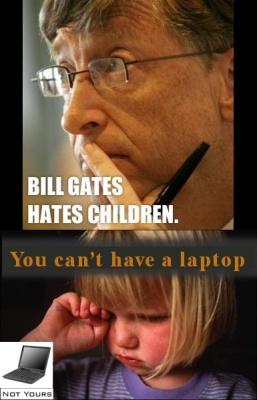 Ever since it got the cold shoulder from those open source junkies over at the OLPC project, Microsoft has been sort of sour grapesey about the whole thing. Now it looks like they've changed tacts: instead of offering up Windows CE to power the fledgling Children's Machine CM1 2B1 B1 XO WhateverTheHeckItsCalled, Microsoft is trying to stuff the entirety of Windows XP into the little box. According to NickNeg, the OLPC has an SD card slot specifically at Bill Gates' behest, since Windows XP requires a minimum of 1.5GB of memory for installation, while the OLPC only packs 512MB of storage. Microsoft has apparently been provided a number of OLPCs to this end, but still hasn't managed to get the thing working. In a perfect world, Microsoft would realise the error of its bloatware ways and prep a stripped down version of the OS to delight enthusiasts the world over with speed and minimalism, but somehow we're thinking that's just a bit unlikely.

[Via Slashdot; thanks simosx for the pic]
In this article: bill gates, BillGates, microsoft, olpc, windows xp, WindowsXp, xo
All products recommended by Engadget are selected by our editorial team, independent of our parent company. Some of our stories include affiliate links. If you buy something through one of these links, we may earn an affiliate commission.
Share
Tweet
Share