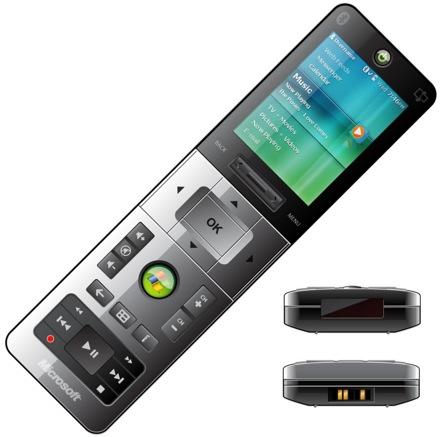 Just one day after seeing the first "officially announced" SideShow remote for Vista Media Center Edition, out pops this slider from Ricavision. Their loquaciously named remote -- the Microsoft Windows Vista SideShow Media Center Remote Control -- is a confirmed IR and Class 1 Bluetooth device. That gives you a 100-meter (or so) operating radius when coupled with the included USB RC6 (IR) receiver and Class 1 Bluetooth receiver. Nice, however, what's most notable is that sweet, sweet 2.5-inch QVGA LCD display for Microsoft's promising SideShow technology; a bit of magicking that hooks the remote into a suite of Media Center "Gadgets" allowing you to extract and display information related to your media. In short, you'll have damn-near full control over your media center's TV recordings and schedules, music library, radio presets, and collection of pictures and video. Better yet, the remote works with any Gadget assigned through Vista's SideShow Control Panel like eMail, calendar, and RSS feeds just to name a few. Great, now add a touchscreen and hack that thing in half and we'll be able to carry it around in our pockets. Nevertheless, we'll have to give this, and other SideShow remotes a thorough hands-on at CES in January to see if they're worth the premium. Otherwise, you'll just be in suspense, wondering how to spend the $199 the MWVSMCRC will cost ya when hitting in April, 2007 -- that would just be mean. More product renderings after the break.

Read (not live until CES in January)

In this article: mce, media pc, media pcs, mediapc, mediapcs, ricavision, sideshow, sideshow remote control, SideshowRemoteControl, vista mce, VistaMce
All products recommended by Engadget are selected by our editorial team, independent of our parent company. Some of our stories include affiliate links. If you buy something through one of these links, we may earn an affiliate commission.
Share
Tweet
Share