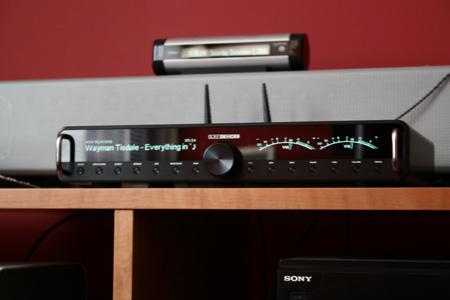 What makes a $2,000 digital music player a $2,000 digital music player? When you're Slim Devices, that's a pretty tricky question to answer. After all, its relatively affordable Squeezebox line has garnered extensive praise and a nearly rabid following over the past couple years -- especially in its latest (and most attractive) incarnation. What's more, Slim has positioned the Squeezebox as an audiophile-friendly device from day one, touting its extensive tweakability, high quality digital-to-analog conversion, and compatibility with the surprisingly useful SqueezeNetwork. Don't get us wrong, we suspected there was room in Slim's portfolio for something above the Squeezebox. Something with a larger display, perhaps something that'd fit in an A/V stack. What we never saw coming, though, was a price hike of seventeen hundred dollars over its little sibling. So just what does two large (that's over six Squeezeboxes with the WiFi option, for the record) buy the discerning music connoisseur these days? Let's take a closer look.

The most immediately obvious difference is the form factor. The Transporter looks far more traditional than the Squeezebox and fits in well alongside your garden-variety receiver, though it takes far more than a garden-variety receiver to really reap its benefits (more on that in a minute). The chrome handles on its face seem more decorative than functional, especially considering that it isn't rack mounted. We would've preferred them in black, or better yet, absent entirely. Slim points out that they can be unscrewed from the inside and removed, though that'll leave visible holes.

We've heard several folks comment that the Transporter is surprisingly light. Yeah, we'll admit, we probably expected a little more heft to the thing considering its size, but we refuse to buy into the argument that weight should vary proportionally with price. After all, ounces and pounds are pretty irrelevant once they're sitting on a shelf, right? We say let functionality and performance do the talking.

The next thing we notice is the extensive array of connection options. The Transporter really picks up where the Squeezebox left off in this department, adding digital output (in four flavors, no less), a word clock input, dedicated in / out IR blaster jacks, a serial port for control via a home automation setup (which the buyer of a $2,000 media player is admittedly likely to have), bonus options for connecting digital inputs, and heavy-duty XLR analog outs. Pay heed here: the extra jacks here largely define what the Transporter's all about, extreme fidelity for extremely picky ears. Many of us have never seen some of the connectors this thing's rocking, and most of us will never own equipment that can use it.

Back to the front of the unit, we see something no Squeezebox has ever offered -- controls. Pushbuttons form a line across the bottom of the entire unit, while a large knob dominates the center and forms a divider between the Transporter's two displays. The knob forms the basis of a fairly natural control method for Slim's UI, which is shared between the Squeezebox and Transporter. Twirling the knob back and forth equates to Up and Down on the remote; pushing it is the same as Forward. Unfortunately, Back (which is as important as Forward when navigating around) gets relegated to a pushbutton adjacent to the knob. It would've been cool if Slim had given the knob another degree of freedom by allowing it to be pushed up, down, and side to side -- a la BMW's iDrive -- but the separate Back button isn't a major annoyance. Most users will be controlling the device via remote 99 percent of the time, anyway.

Speaking of "a la BMW's iDrive," we almost forgot the knob's trickest feature: it gives force feedback. Sounds useless, we know, but it's pretty helpful. Each menu item equates to a detent in the knob's movement, and when you reach the end, the knob won't let you go any further. We were pleasantly surprised at how natural it felt -- it's a feature that you really don't notice because it's so well integrated. In fact, the only time we noticed it was when it wasn't working properly; the knob would fairly regularly go to free movement without providing any resistance at the ends of menus. We suspect there are some bugs to work out here, and Slim acknowledges that they've just scratched the surface of ways they can improve the user experience through haptics. This'll be an interesting feature to revisit a year or two down the road.

The Transporter's second display, on the other hand, totally changes the game today. Slim's got some of the baddest visualizers in the business -- who can argue with dual analog VU meters? -- but the Squeezebox just doesn't have the real estate to show it when track information is the real priority. That being said, SlimServer's current support for the second display is a little sparse and we can't do everything we'd like. Two visualizers? No can do. Standby mode on the right display? Sorry. We anticipate the Transporter'll get a lot more love in the next major software release, but until then, bear in mind that it all feels a little hacky.

Like the Squeezebox, the Transporter is a slave to its server. It can't be used without being connected either to SqueezeNetwork or a PC on the local network running SlimServer. This differs from competing products like Roku's Soundbridge, which can store Internet radio presets internally and connect to them directly without the aid of another computer. Generally, this wasn't a problem because SqueezeNetwork is always on and always available when your PC's off. Actually, we ended up spending more time on SqueezeNetwork than we did on our own SlimServer, thanks to an extensive selection of podcasts, featured radio stations, and cool features like "Natural Sounds" (who doesn't like relaxing to a babbling brook?). SlimServer's a decent music management system in its own right, too, with a vibrant user community and a host of third-party plugins that do some nifty things for your music and for the hardware -- take, for example, the weather report plugin we used as our standby mode on the Transporter. It can be a bit finicky to set up and maintain, particularly if you want to add MoodLogic or MusicMagic into the mix, but Slim's user forums are always well-stocked with knowledgeable folks (users and Slim employees alike) that seem happy to help you through the hard times.

Is the Transporter worth its breathtaking price tag? To an overwhelming majority of the FLACC-listening public, the answer is "no" -- and that's just how Slim sees it. The company is the first to note that the device "was designed to appeal to the most discerning audiophiles and music lovers" with "sound quality that surpasses even the most exotic compact disc players." But hey, if you don't have superhuman aural senses and you're just digging SlimServer or the unit's excellent interface, the $300 Squeezebox will still suit you just fine.
In this article: features, review, slim, slim devices, SlimDevices, slimserver, squeezebox, transporter
All products recommended by Engadget are selected by our editorial team, independent of our parent company. Some of our stories include affiliate links. If you buy something through one of these links, we may earn an affiliate commission.
Share
Tweet
Share