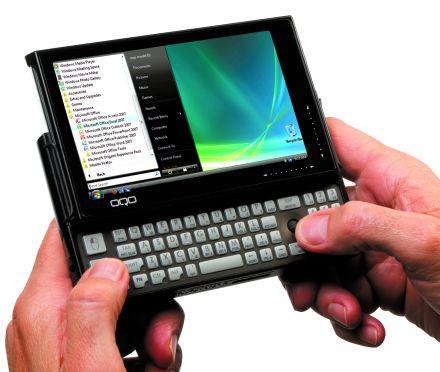 It's been pretty much exactly two years since we first hassled Jory about this, but OQO officially announced its latest handheld PC, the Model 02. This time they've improved pretty much everything, from the sleek, new black casing and backlit keyboard (with actual keys!), to the brighter LCD screen and integrated EV-DO. Specs have gotten a much needed bump across the board, with the most expensive model they're offering sporting a 1.5GHz VIA processor, 60GB hard drive, 1GB of DDR2 RAM, a 5-inch, 800x480 pixel display (with active digitizer for pen-based input), Bluetooth 2.0, 802.11a/b/g WiFi, integrated EV-DO (courtesy of Sprint), and even an HDMI-out port. The Model 02 also has a few other slick features, like the ability to zoom to 1000x600 and 1200x720 interpolated modes, a sensor that automatically protects the hard drive in case of a drop, and an optional docking station with a DVD+-RW drive, HDMI and VGA video out, three USB 2.0 ports, and a 3.5mm audio jack. There are a couple of disappointment -- namely that battery life is a paltry three hours unless you pick up an extended life battery, it's only Vista-capable, not shipping with Vista (at least not initially), and there's no longer a slot for the stylus -- but overall this is the upgrade we've been waiting for. Click on for some more pics, as well as a shot of the OQO in the docking station.

In this article: breaking, CES, oqo model 02, OqoModel02
All products recommended by Engadget are selected by our editorial team, independent of our parent company. Some of our stories include affiliate links. If you buy something through one of these links, we may earn an affiliate commission.
Share
Tweet
Share