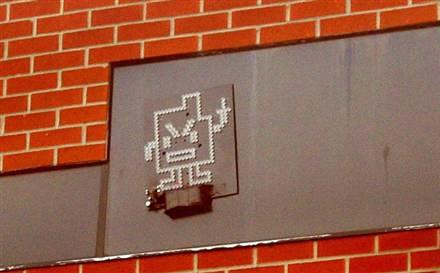 Oh, you viral marketers and tricksy Adult Swim promo squads, what've you done now? No longer content with offending parents and making the male aged 18-30 demo chortle with glee at their New Jersey debauchery, it would appear Aqua Teen crossed over into real life to wreak havoc promoting the upcoming ATHF movie. Geeky Lite-Brite-like visages of the Mooninites caused shut downs in several transit arteries in Boston, including Interstate 93, the Longfellow Bridge, and Storrow Drive, leaving thousands asking WHAT HAPPENED TO THEIR FRICKIN' CAR?! Strangely, Turner stated that these viral ads have been in place in 10 major cities for between two and three weeks, which leaves one to wonder why no one noticed the strange, pixelated cartoon characters flipping the bird until just this afternoon, and just in Boston.

Update: One's for sale on eBay! Thanks, everybody.
In this article: ads, Adult Swim, AdultSwim, Aqua Teen Hunger Force, AquaTeenHungerForce, athf, boston
All products recommended by Engadget are selected by our editorial team, independent of our parent company. Some of our stories include affiliate links. If you buy something through one of these links, we may earn an affiliate commission.