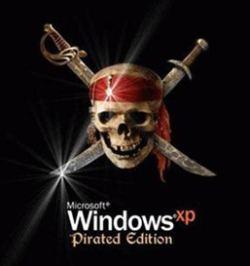 Many of us have a reason to give thanks to Bill Gates, whether it be for the PowerPoint presentation that got us our last promotion, the Word spell checker that helped us avoid an embarrassing double entendre in our thesis paper, or the ol' Xbox 360 that has drained our productivity, consumed all of our free time, and driven our sweethearts into the arms of other men. But Romanian president Traian Basescu has a bigger reason than most to owe the Microsoft founder a debt of gratitude: he claims that rampant software piracy in the Eastern European nation was the single biggest factor in developing a healthy IT industry. Yes, believe it or not, a head-of-state actually stood up in public -- at a press conference to celebrate the launch of a Microsoft global technical center -- and told Gates face-to-face how illegal copies of Windows "helped the young generation discover computers...set off the development of the IT industry...[and] helped Romanians improve their creative capacity..." Indeed, nearly 70% of all software used in Romania today is pirated, according to some experts (pirates even peddle their wares to legitimate businesses, reportedly), despite the anti-piracy legislation passed some ten years ago. Amusingly, Basescu justified his countrymen's ridiculous levels of IP theft by claiming that "it was an investment in Romania's friendship with Microsoft and Bill Gates." Being the experienced political that he is, Gates chose to keep his mouth shut instead of using the president's provocative comments to launch into an anti-piracy tirade -- though we're sure that the world's richest man had to practically bite off his own tongue to do so. Still, after the press shindig -- while the two men were in private enjoying some traditional placenta pie pl??cint?? -- Gates reportedly dropped the Mr. Niceguy facade, stared Basescu coldly in the eyes, and uttered a single word: "Viodentia?"

In this article: bill gates, BillGates, microsoft, piracy, romania, traian basescu, TraianBasescu, windows
All products recommended by Engadget are selected by our editorial team, independent of our parent company. Some of our stories include affiliate links. If you buy something through one of these links, we may earn an affiliate commission.
Share
Tweet
Share